Modernizing the Stereo - Part 7 - THIS is what makes all the difference...

So all the hardware is now installed. Cleanly, might I add, and as a side benefit I was able to clean up and fix the mess left by others.  So does it sound good?

Well, I knew that the new speakers alone would be an improvement. Remember, a few months prior I had swapped out the door speakers for the Alpine coaxials, and it was actually pretty good, even using just the OEM deck (no external amp).

But now I have 6 very good speakers in the car - a pair of Alpine X-65C components up front and that pair of Alpine X-S65 coaxials in the rear.  I presumed all the high quality wiring and the powerful Audio Control d.6-1200 amp (at 4 ohm = 6x125 watts) with built in digital signal processor (DSP) WOULD mean good clean sound, but frankly I was not prepared for how a DSP can make a HUGE difference - even though I am choosing to stick with the OEM cassette deck (hooked up to the OEM optional Sony-made CD player).

Before I started this project, despite what I wrote in this blog, I was committed to keeping the OEM deck if possible, for aesthetic purposes.  To me, the OEM deck simply looks right.  So, no (more) fancy 21st century head units (plus I wasn't impressed with the Pioneer CyberNavi that had been installed by Worx).  And, my research quickly revealed that there are now a lot of products that integrate with the factory OEM head unit. With modern technology, the compromises inherent in factory head units can be vastly eliminated, and with modern cell phones I can get all of my navigation needs taken care of as well. So really, no more need for a 2 DIN stereo and the large display. Whatever stereo I use, I can focus on the sound quality.

And this is why a DSP for me was a necessity from the beginning. Given however the lack of space in the car, an amp combined with a DSP was the only solution.  And, because this would be the first time I would use a DSP, I wanted something relatively simple to use, but sophisticated enough to actually add value by making a noticeable improvement in sound quality.

My research revealed that there are some amps with rudimentary DSP controls on the amps themselves... but the majority of the current popular stand alone DSPs /DSP amps use bespoke software to make the necessary adjustments.

As Pablo commented in an earlier post, the Five Star Car Stereo YouTube channel  (with Dean and Fernando) is a fantastic resource. The other notable YouTube channel is Car Audio Fabrication,  but Mark from that channel tends to be a bit too into certain brands (i.e. sponsored), while Dean and Fernando seem a bit more about installing what the customer wants (but centric to what their shop carries).  I also love their "911" series - I can totally relate to crappy installs that need to be removed and redone! Therefore, while Mark from CAF had a lot of interesting tips, I paid more attention to what Dean and Fernando talked about and demonstrated.  Thus when Mark recommended Audio Control, I was a bit skeptical (I've seen him act as their spokesman), while Dean and Fernando actively compared Audio Control against other brands, including Alpine, Helix, Rockford Fosgate, head units that include DSPs, etc.

But in the end I was swayed by what both Dean and Mark said about ease of software use, which is why I went with the Audio Control DSP. The fact that their d.6-1200 product combines a 6 channel amp with the DSP was ideal, because I wanted to run the Alpine tweeters actively.

I'm not going to talk about the amp and its install because I've covered that in this Modernizing the Stereo series, nor will I talk at length about the features that the d-6.1200 has - stuff like AccuBASS (which restores bass the factory stereo removes), GTO (their auto-on feature), etc. - you can find plenty of reviews on the YouTube channels I mentioned plus elsewhere online.  I will mention however that I now have a USB cable tucked under the drivers seat by which I can hook up my laptop so I can use the DSP software to fine tune the d-6.1200's DSP settings: 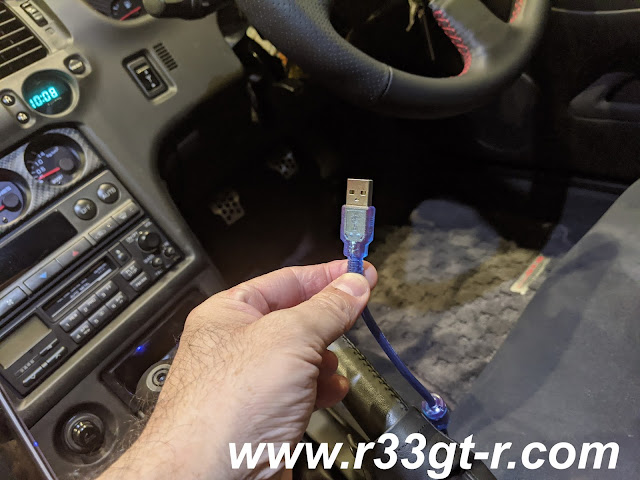 Anyway, once the software was downloaded and installed, here is what the initial screen looked like:

I then began to tinker with the settings to get used to the software. It was also interesting to see how the music I was playing looked. Here is the Input View showing the RTA input from the OEM deck - you can see how there is a dip in the mid-range: 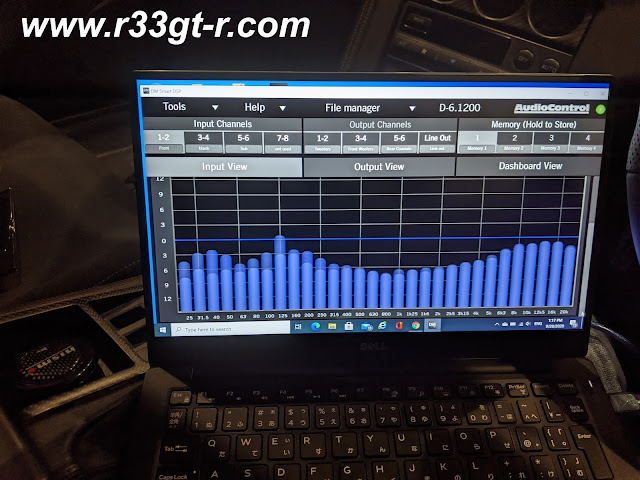 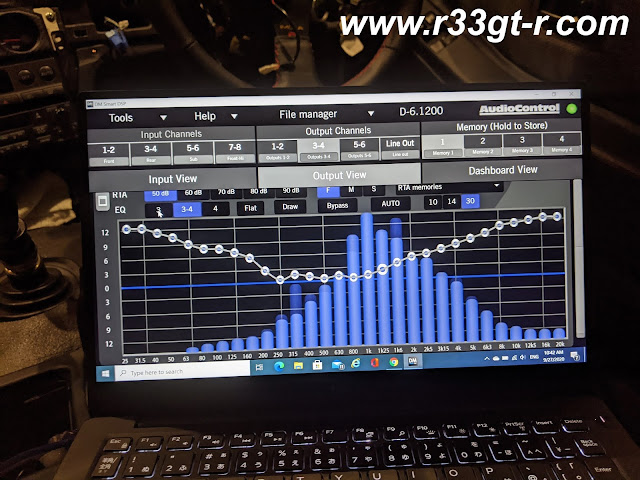 It was here I started using the "auto" equilization feature (looking at the input and output RTA) in conjunction with playing back pink noise through the Sony CD player, in order to get the flattest output possible - important as part of OEM head unit integration.  Once output is flat, then a user can start tweaking to customize the sound to his liking.
Another cool thing you can do with DSP is to measure the distance from your ears to the speakers - you can see below how I've entered, in centimeters, the delay distance.   I did this for all 6 speakers, both when I was in the driver's seat and passenger's seat. And yes I could immediately tell the difference, the sound seemed to come from a proper sound stage, with the vocals seemingly floating above the center of the dash, and instruments on either side! 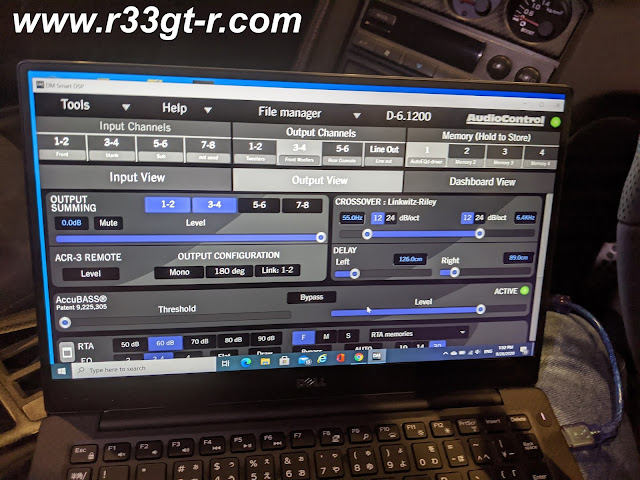 I also have to mention that this amp has an options port, to which I hooked up this Bluetooth module through which I can stream music and/or use a miniaturized version of the laptop software from my phone. 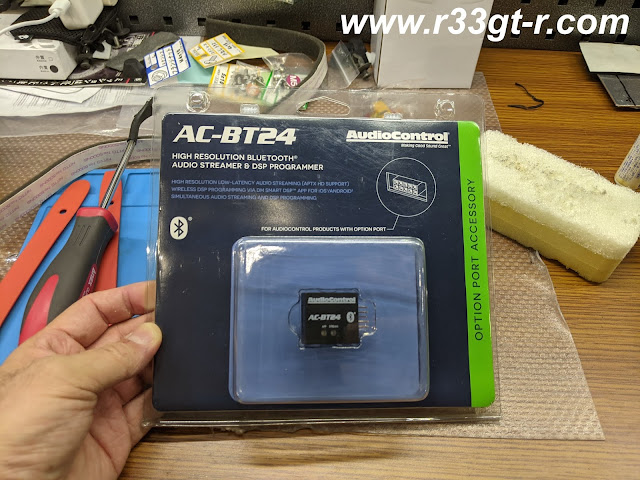 Finally, because the DSP allows for different settings, I installed this optional controller (so I can change on the fly) and hid it in my old ashtray (which had holes drilled in the back) - excuse the dirt/dust on the dash surround, I'll get that cleaned up in due course: 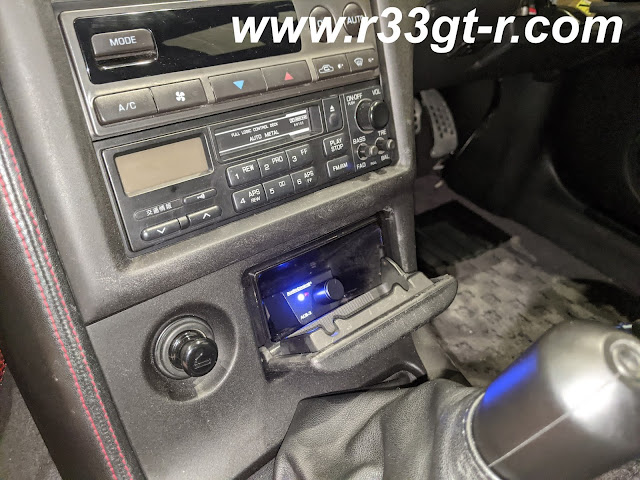 Current settings are for "driver", "passenger" and "streaming" but I will continue to tinker with the DSP settings - clearly I have a lot more to learn, plus I haven't really tuned the output to my ideal. But the music truly sounds fantastic - even though I am still using a flat curve! I've found that I can adjust for each song by using the OEM deck treble and bass controls!

Meanwhile I am debating whether to keep going and add a proper subwoofer (located in the trunk) or maybe a powered one under drivers seat?  I also worry - is the OEM alternator enough or does the addition of a fairly powerful amp require an upgrade? Anything else I need to do?

Oh, and while I was working on this, I did a few other things... standby for some more posts on those!

There really is something about the OEM head unit that just fits.

At this point I'd change the alternator preventively. The only electrical changes I made to my car were a Haltech ECU and a hardwired Nismo fuel pump that bypassed the regulator and the alternator was already not keeping up.

Agreed on the OEM head unit!

Alternator - but yeah which brand. Was previously looking at the Advance ones but my guy told me about premature failure. Any ideas?

Supposedly this shop is reputable in Australia/US circles, might work for you as well.

Wow, thanks! Odd name but it looks really good! Will have to research this...

Gabe, yes I could, thanks. I've seen people who have done it. But of course I like being different...