So even though I am extremely impressed with these new Alpine Type X 6.5 inch coaxial speakers, and listening to cassette tapes takes me back to my youth, the natural next desire is to listen to digital music on these speakers.   As someone commented in an earlier post, there are now Bluetooth devices that play through a car's FM radio...but that is too easy (and I can't be sure if that produces the best sound).

And you guys know me - not only do I want the best, but I like to do unusual things. So when I discovered that all OEM Nissan decks (from this era, at least) have this:
Which is to hook up an 8 pin DIN cable.  Which then connects to a CD or MD player and allows music from that digital player to be streamed into the cassette deck (according to the R33 Skyline service manuals that I've been slowly collecting over the years).  Of course it became a challenge for me that I could not resist.

First step was to find a compatible CD player.  I went onto Yahoo Auctions and found a Nissan OEM CD player from around the same time period: 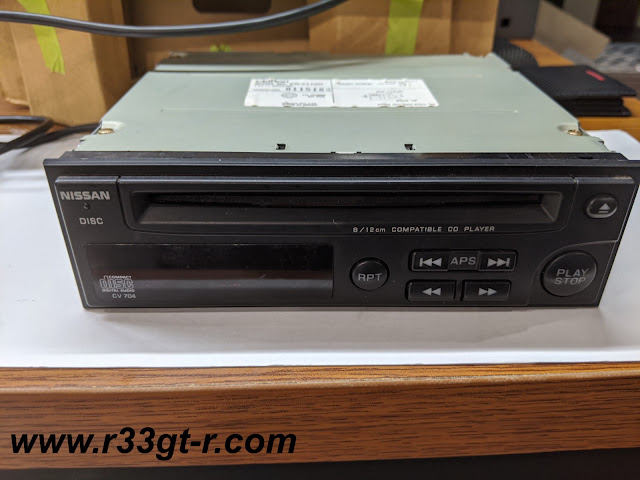 Then, in addition to the 8 pin DIN cable, I had to figure out what fit here: 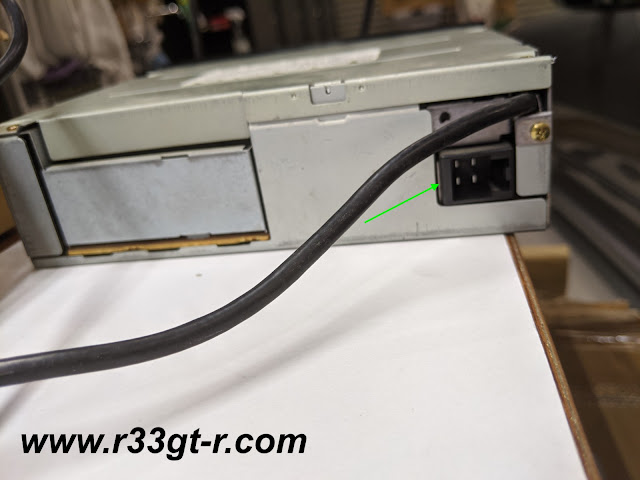 Turns out that I needed a standard Nissan 10 pin connector harness with certain power leads (ground, power, accessories, and illumination) split to a 4 pin connector. But again Yahoo Auctions to the rescue. 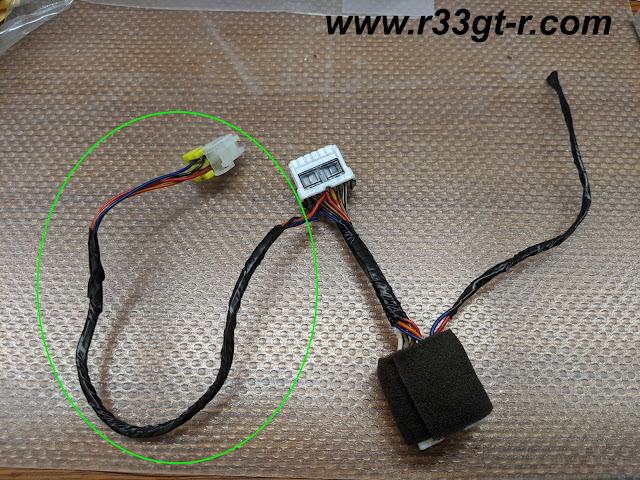 Meanwhile, I had found (yes!!) the original Nissan cassette deck that came with my car. 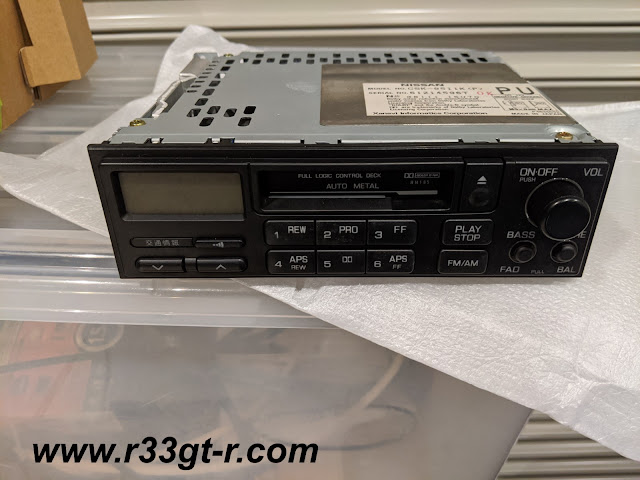 This is key because it turned out that the Nissan cassette deck I had gotten off Yahoo Auctions and fitted to my car (with a guarantee to work) to replace the cassette rejecting deck installed by Nismo Omori did not play tapes cleanly on one side (the deck head appears to have some kind of issue which blocks sound to cleanly go to the right side, versus when the auto-reverse plays in the opposite direction, where the sound is super clean). So I was hoping that my old cassette deck would not have that problem. Meanwhile, before I installed it in my car I used it to test the CD player. 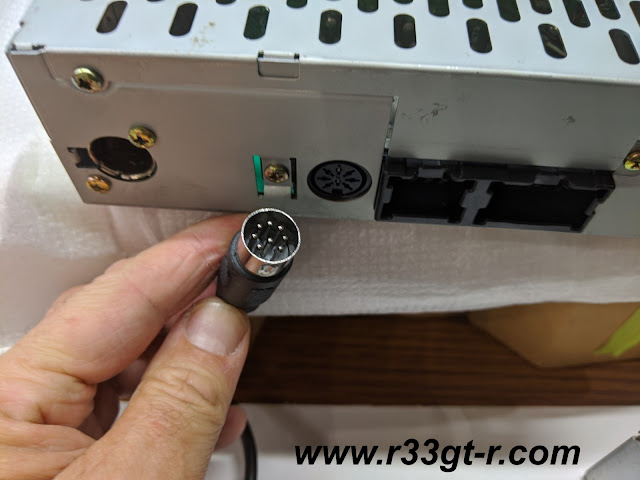 Unfortunately, when I finally got it hooked up, this was the result.
Indeed it did connect, and the power flowed from the main deck, but it simply would not play.

Hoping that it was maybe a broken rubber drive band that I could replace, I opened up the unit but found nothing visibly wrong with it. 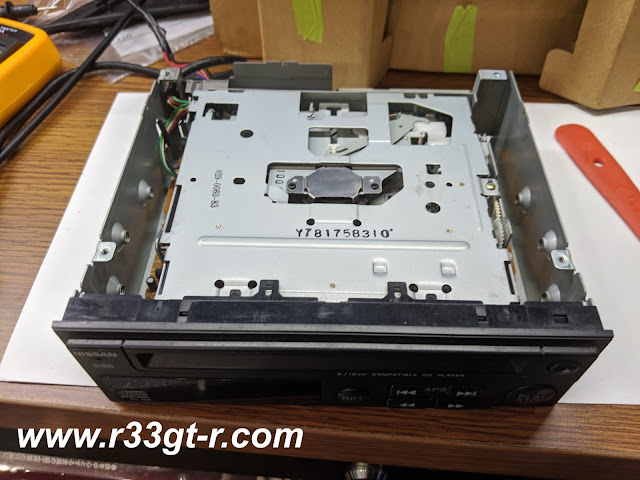 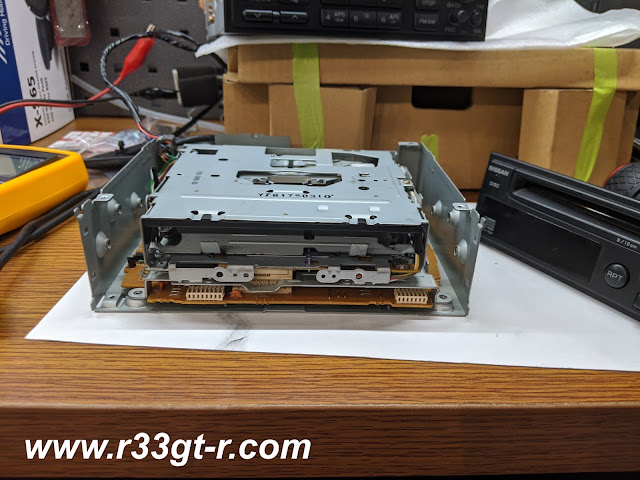 So close, yet so far!  So back to Yahoo Auctions.

This time I found something that claimed to be an OEM Nissan accessory CD player from the R32/S13/180SX era, made by Sony (and labelled as such).  A quick check of the backside showed similar sockets as the Nissan branded one (plus the controls looked identical) so I went ahead and got it.

I hooked it up and: 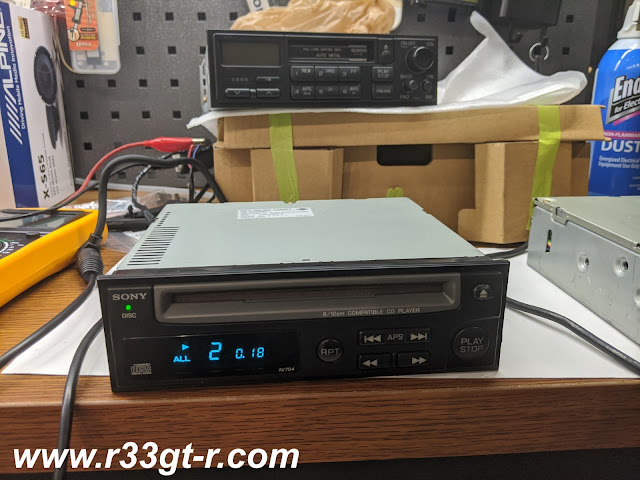 Success! No sound as no speakers hooked up during this test but:


And to show everyone how the first CD player didn't work:


With the original cables being too short for installation in my car (because the car doesn't have another 1-DIN space in the center stack) I had gone ahead and ordered a 1.5 meter extension cable for the 8 pin DIN cable. Now that I was confident that the Sony would work, I went ahead and modified the power harness by cutting and splicing in 1.5 meters of matching colored wires.


So now, I'll be able to install in the car SOMEWHERE, question is where?  But first, let's test it and see how the Alpine Type X speakers sound, shall we?

I didn't even know the cassette deck had these extensions. Really interesting stuff.

Nope, got the 8 DIN on Amazon, brand new item. The 8pin layout, from what I remember it is the same as can be found online - certain pins for the L/R speakers, and power/ground. Good luck with your project!! Let us know how it works!

Hey Aki, just to clear my ideas.
So, you use a8 pin to use blutooth but you´ll use CD module!? Will it be
simultaneous?

So long as the sound is good, I am open to either. But my experience with Bluetooth is that the music is often compressed to the point where true SQL is not possible.

I know, but I didn´t understang the connection between the CD module and the bluetooth.
Sorry about the silly question :D

Ah! I see the source of confusion - I meant that there are Bluetooth devices that transmit via radio frequency so the FM radio can pick it up. The CD player here is connected via the 8 pin - in operation once it take in a disc the radio screen on the OEM radio goes blank, so not possible to be simultaneous.

That being said, I have a Bluetooth solution coming...

Where did you end up locating the CD player?

It is still on the floor in front of the passenger seat. I am very tempted to install the Kenwood Sound Cruising System CD player - maybe something I will do over the winter holidays.