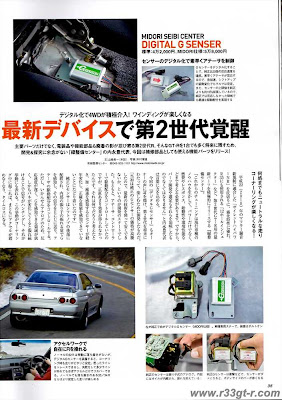 Page 36, Top two photos text:
Midori Seibi Center
Digital G Senser
Standard: 42,000 yen, Midori Spec: 58,000 yen
With digitalization of the sensor, ATTESA can be controlled quickly.
By making digitalizing the G-sensor, capable of response times 30 times faster than OEM. Because ATTESA responds quickly, the car is stable during changes in posture due under upshifting and full acceleration. Also, compared to OEM the upper limits of the sensor are 15% higher, hence allowing for ideal power distribution in areas where the OEM could not respond.

Title: With Digital, the 4WD comes on aggressively! Winding roads become fun!
New Device Wakes Up 2nd Generation!
Second generation GT-Rs are in the shadow of not just main parts, but also electronic and functional parts, disappearing from production. In order to keep even 1 more such 2nd gen GT-R on the road, President Uchinaga of Midori Seibi Center, which continues to develop and experiment, now releases a functional part that is also a repair part!

President Uchinaga stresses that, "It is important for tuning from now on, to think about, not just power, but fuel economy, engine response, driveability and environmental ability, using the know how of modern cars."

The "Digital G-sensor" featured this time, was also developed in response to the desires of the owners, to enjoy their 2nd generation cars in the present day. "In the beginning, the reason why we began development was to use modern technology because the OEM G-sensor was too expensive. Originally, we used ATTESA Controllers to control the power distribution, but honestly we were not able to get good results. When we began thinking about why, we realized that the G-sensors which measure acceleration and deceleration had deteriorated, and were not measuring accurately.

The OEM G-sensor is located behind the shifter, and senses Gs by how much the internal pendulum swings, sending a signal to the ECU, upon which the ATTESA power distribution is controlled. Unfortunately as this is analog, the response time is slow, the G sensing range is narrow, and further as the springs deteriorate they continue to swing, resulting in a signal that hunts back and forth, which shows in the car's behavior. If such behavior appears in mid corner, the accelerator cannot really be applied, resulting in a time loss.

"The Digital G-sensor senses digitally, the signal and the processing is all digital, and the time for signal transmission to the ECU is overwhelmingly short, which equals a fast response time, resulting in the ability to send only the needed amount of power to the front wheels. So, one is able to always drive with ideal power distribution." 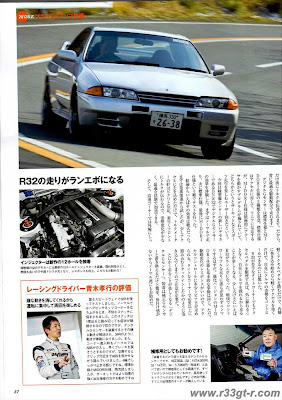 They have prepared two Digital G-sensor models, the standard and the Midori Spec. The standard gives a linear response to accelerator input, while the Midori Spec contains a program to aggressively activate the ATTESA, which would be the choice of those who track their cars on the circuit.

This time, we were able to experience the effects of the Digital G-sensor in Midori Seibi's new BNR32 demo car. The test was done first with the OEM, then the standard, then lastly with the Midori Spec version.

The conclusion is that the effects were huge. First they tested in starting acceleration, (with the new units) a little bit of force on the gas pedal resulted in the torque meter needle twitching. Acceleration under ideal conditions is possible, as torque is transmitted to the front wheels quickly and there is little change to the car's posture.

Even in tight corners, where the R32 is not very capable, by manipulating the gas pedal, the car would not drift out, the car could be freely controlled and thus fun to drive. It may be a bit of an exaggeration, but the R32 has become a LanEvo. Anyone would be happy with a car that is lightfooted and controllable. The Midori Spec version, has basically the same demeanor. However, the responsiveness of the change to the drivetrain is good, resulting in a need for a bit of severity in gas pedal application. In tight corners, application of too much gas results in the car "tucking in" and so caution is needed.

In any case this "Digital G-sensor" makes driving fun. Installation is easy, just replacing the OEM sensor. Recommended for those who want to keep a stock look as it doesn't look like an aftermarket mod.

Page 37, bottom right
Also recommended as a repair part!
President Uchinaga says: "Even though this is a G-sensor that just by installing changes the driveability, compared to the OEM part (R32: 154,000 yen; R33: 140,000 yen; R34: 58,000 yen - all prices before taxes), it is cheap and is ideal as a repair part. Since everything is digital, you can be assured that many years of use there will be little trouble." Apparently around 10 owners have already purchased this.

Page 37, bottom left:
Racing Driver Takayuki Aoki's Impression:
Gets rid of unwanted movement, allowing concentrated driving for enjoyable lapping.
We tested it using the R32 at Fuji Speedway. With OEM, accelerating out of hairpins or Netz corner there was an uncomfortable "snatch". Once this "snatch" appears, no matter if you step on the gas the condition remains and is bothersome, but upon installing the Digital G-Sensor, this bothersome movement disappears, and the car's movement becomes docile like the R34. Also, with the OEM upon entering a corner the ABS kicks in, and so you try to get off the brakes as quickly as possible, but with the new part installed I was able to keep on the brakes to the apex with the ABS activated. Feels like all 4 wheels are securely stopping. I tested both the standard and the Midori spec versions, and prefer the latter as it works even better on the circuit.