Truth be told, I did want to first discuss those other mods I did to my car before the SSCT track day on the 23rd at Fuji Speedway as I had mentioned in my entry for December 12. But as it turned out, not only did my friend Dino accompany me and agree to take some video of me flying by on the long straight, but Adam from FEAST Auto Group was also at Fuji and took some photos and was kind enough to allow me to use them for this blog. Thanks guys - this stuff is too good NOT to publish first - so the post on the other mods will have to wait!

This time, both Thomas (purple R33 GT-R - his blog) and Terrance (white R33 GT-R who ran with me at Tsukuba in September) decided to run in this track day. So we convoyed to Fuji and arrived a bit past 0800, checked in and proceeded to get our cars ready for the run.

Here is how we looked, ready to go. 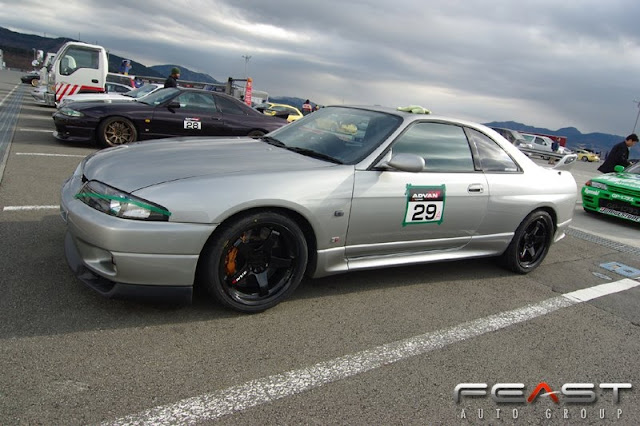 Oh, you may notice one "mod" here - I was one of the lucky few to be able to order, and purchase new, these limited edition Nismo LMGT4 rims. Of course, me being me, before I put them on I spent some time in my garage apply some glass coating. 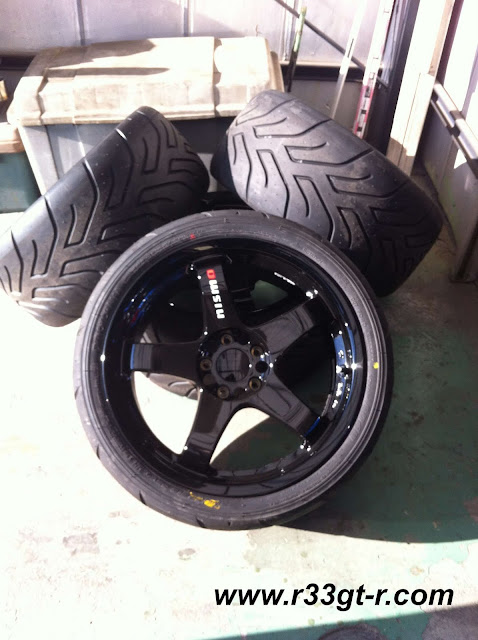 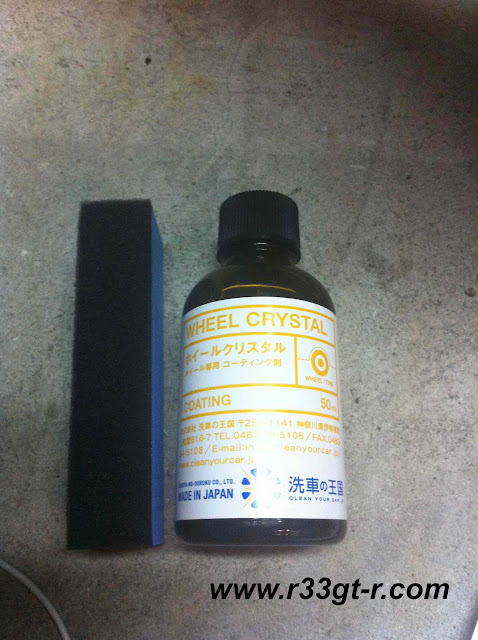 This worked great on my stock 17inch rims, which to this day I can blast with water and the dust just rinses off. But on black wheels, I have to say I am not sure about its effectiveness - first because black actually doesn't show the dust as badly as a silver wheel, and also because, in its application, I found that it's very easy to leave minute scratches in the gloss black.

But, in the end, it was worth it - and here is a close up of the front wheel and the R35 caliper and rotor. 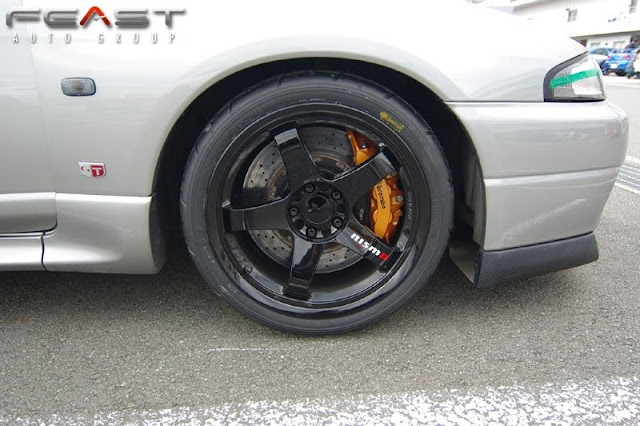 On this day, SSCT had blocked off two full hours - one at 1100, and the other at 1300. However, I chose to run only 30 minutes at a time, for a total of one hour. In retrospect, I probably should have taken advantage and run the full 2 hours, but I was worried about putting too much stress on my car. In part, I was worried about how the new brakes would hold up - but that turned out to be NO PROBLEM at all, I ended up being able to easily slow down for the first corner with no fade, every single lap. Best mod ever?

Temperatures were cold that day, I believe the track surface was about 2 or 3 degrees C, and it took a while for the tires to warm up. But I was fiddling with a few new items - one the DigSpice GPS track data recorder, and also the new iPhone app called "Harry's LapTimer" which allows video recording (of every other lap) plus GPS data plotting. I also had on board my trusty old Panasonic video camera, as well as the LapShot laptimer device.

Needless to say, my first 30 minute stint I was more concerned about getting all of these working properly than setting my best time! In the end, I discovered I had gotten the DigSpice and LapShot to work, but not the iPhone app the first time out. And second time out, I got all three to work, but the iPhone holder failed, resulting in video taken at various weird angles.

Howver, I plan to have the data and video from the above items processed soon, and will post an entry with these materials soon.

Anyway - here are photos from Adam of me in action: 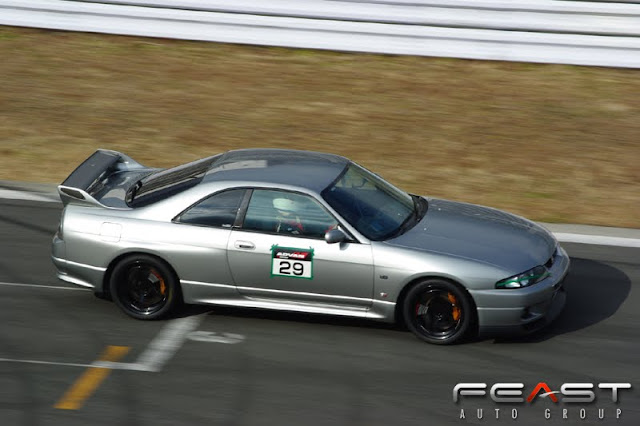 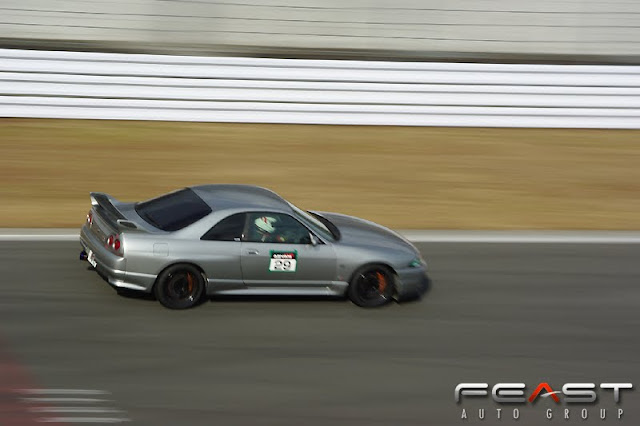 Finally - here is video of me (third car) flying by on the Fuji straight. I was probably still accelerating on my way to about 260kph - not as much boost that day - about 1.2 I think - meant a lower top speed. Enjoy!

Tomei 's new Titanium Exhaust... the Results are In!

Well today couldn't come fast enough. As of last Friday, Tomei Powered had shipped their new Expreme Ti full titanium exhaust to BeAmbitious to be fitted to my car - most likely the first in Japan! Now all I had to do was to find a place to dyno the car before and after the new exhaust was fitted - so we could see the difference in power, if any!

Ninomiya-san at BeAmbitious to the rescue - he was able to, at short notice find a shop that had both a Dynapack and was willing to swap the exhausts, and do two sets of dyno runs, for a reasonable price. So off I went today to this shop - called Uchida Car World near the Yokohama Lalaport shopping center, down the street from BeAmbitious. 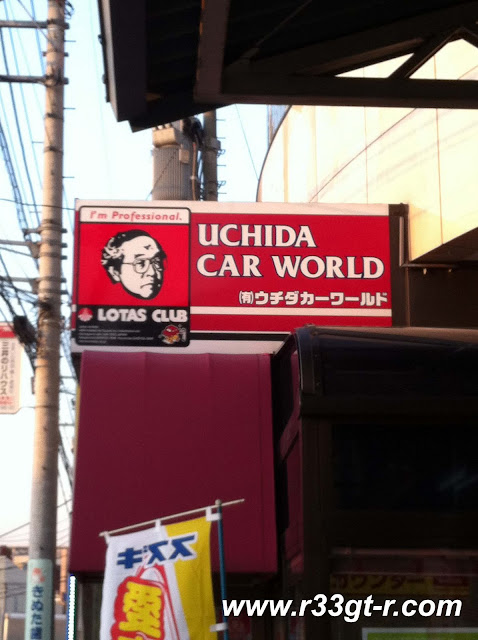 First order of business. Get the sound of the Fujitsubo on video. Ok so as Dino (who came to take some photos and film as well) pointed out A BIT TOO LATE, when shooting video with an iPhone, hold it sideways...

So I apologize for the "thin" videos that follow.

Anyway, here we are trying to get the sound of the Fujitsubo...


After getting scolded for revving the car on the street - you see Uchida Car Works is on a busy pedestrian street! - we waited until they moved the car inside the garage to be set up for the dyno - a Dynapack which measures at the hubs. 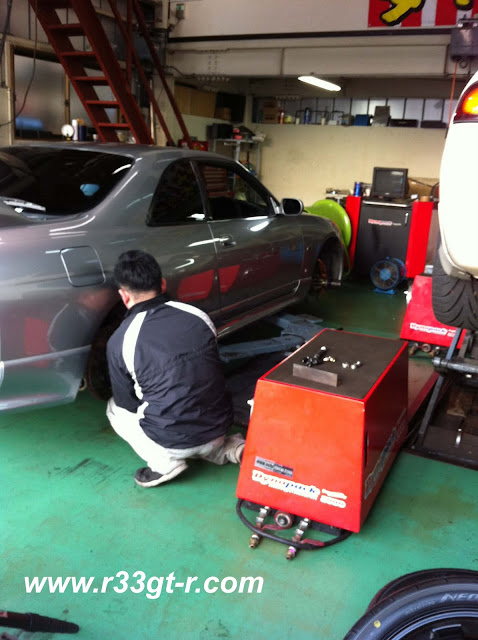 This is in contrast to the rolling road type of dyno at SuperAutobacs where I had my car measured about 4 years ago.

Believing that the boost was set at 1.3, we began the first run... only to end up with some weird numbers - only 299.7ps? What's going on? Ninomiya-san quickly figured out that my boost controller was inoperative - no power going to it. (but actually, that means the boost was set to somewhere around 0.7, which given this uncorrected number - 300ps - means the engine is very healthy, no?)

Suspecting a short or ground issue, he began poking around... and then we began to literally disassemble the dash to figure out where the wiring went. After spotting some burnt wiring, luckily we found that it was a blown fuse, so we put the interior back together and we were in business.

But this time - in order to obtain the best results possible, we set the max boost at 1.5.

Not bad at all considering these are numbers at the hub, and uncorrected for "what the engine makes." Ninomiya-san had suggested we view only the raw data much as he did in his Nismo days, so that's what we did.

Anyway due to all this excitement I forgot to take video... but I think Dino may have some, I will have to ask...

THen it was time to remove the car from the Dyno, lift it up and replace the Fujitsubo with the Tomei exhaust.

Here it was as they began laying it out. 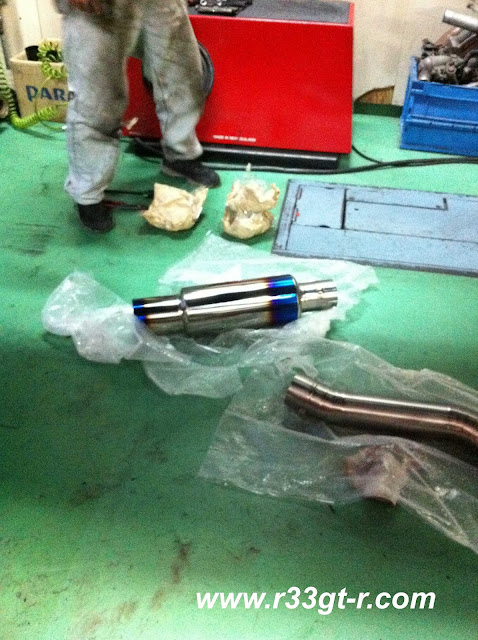 Finally, they began the run with the Tomei:


Unfortunately the sound did not come out as well as I thought it would. But I DID measure using an dB meter app - and there was a difference of 6dB between the two! The Tomei is LOUD! Will try to re-record something like the first video above.

Results:
So what kind of performance did the Tomei generate? 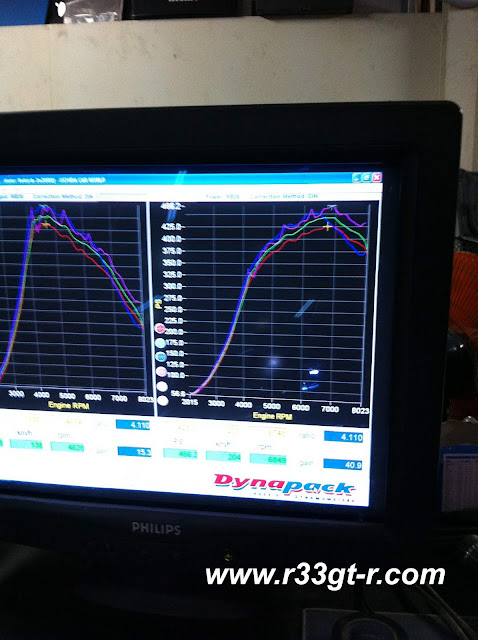 Anyway, looking at the raw data, can we say that the Tomei Expreme allowed the car to generate an extra 40.9 ps? (Last run minus first run).

Not bad - but there is ONE MORE FACTOR to consider. On the Tomei run, its better breathing allowed the engine to spool up the turbos to 1.49 (vs 1.38 on the Fujitsubo). Clearly by comparing the graphs (which I'll scan in later) you can see that, up until about 4000 rpm, the power curve is almost identical - but then on the Tomei runs, is more vertical and ends up at higher numbers after. Also you will note that the second Tomei run, the power curve is jagged - we think the clutch was slipping!!!

So is this extra 0.1 of boost responsible for the difference?

Honestly, I'm not sure. All I know is that the Tomei pipe is gorgeous to look at, at least 6 dB louder (in fact so loud that when I got home, I had to fit the inner silencer), and a few kg lighter. And priced only about 10,000 yen more! (the price of the Fujitsubo has gone up since I bought it!).

Conclusion - Tomei it is!

So in a couple of days, I'll be tracking the car at Fuji Speedway, and hope to have flyby video so we can hear what it sounds like at speed! LOL. Stay tuned!
Posted by Aki at 12:25 AM 3 comments:

It's not the video I promised that would demonstrate how it sounds - that's coming soon - but it DOES prominently feature my car in it.

Some Bits and Pieces

Between having new brakes put on and the present, things have not stood still with mods to my car.

First, I got these: 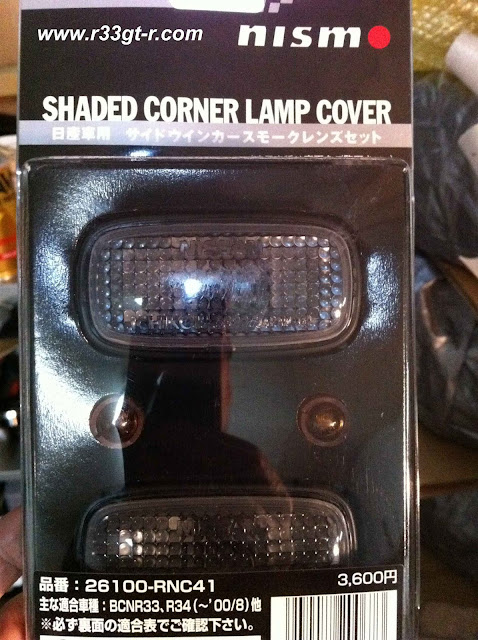 to match the black wheels. I had previously once a few years ago gotten the clear ones, but they just didn’t look right. These smoked ones are much better.

Problem however – if the sides are now smoked – well then what do I do up front? Yes, you can use the S15 Silvia clears from Nissan, but they look almost white, not smoked. Then my friend Russ (RE-xtreme) suggested these “crystal” ones I found on Yahoo Auctions. Said they would match the Xenons. I wonder if I should paint them "smoke"? 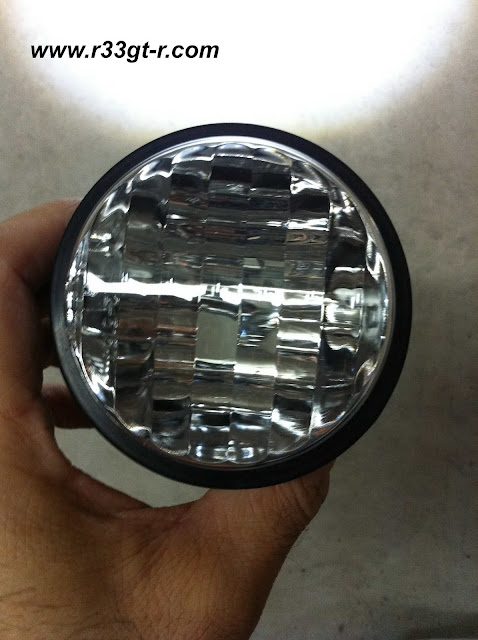 So here is the car in daylight, with these mods – what do people think? 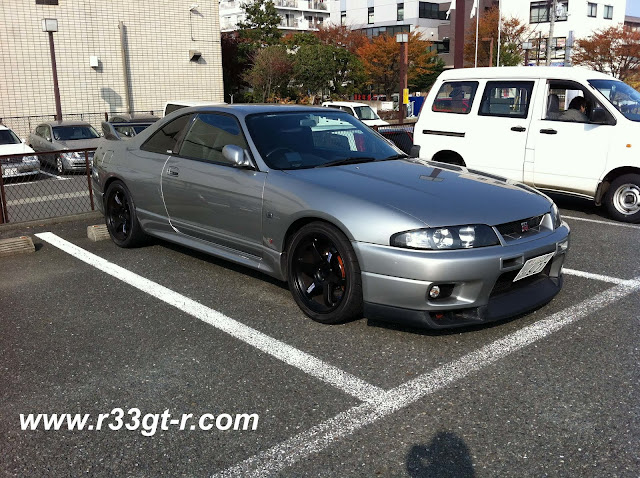 I’ve also since washed the car twice, both times finishing with a coat of Zaino AIO. First time, I don’t know if it was the temperature (a bit cold) but it just didn’t look right. Second time, for whatever reason it worked out just fine. I then applied a coat of Zaino Z-5, just because.

Meanwhile – the stereo project/sound insulation project continues. I was able to find someone in Japan who makes MFD baffles for the front speakers, and so I painted them with some flat black paint to preserve the wood.

Here is what they look like BEFORE I painted them. 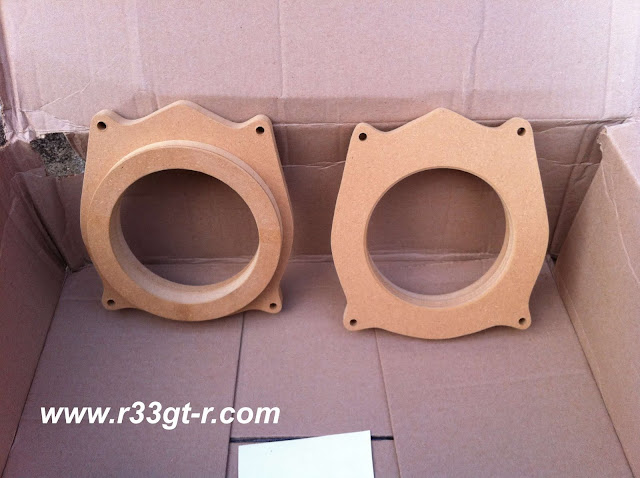 Meanwhile inside the car, I discovered upon popping open the rear quarter panel that it is HOLLOW!!!! Talk about an echo chamber. And this outside wall of this is literally the sheet metal to the rear arches. Looking down, you can see the wheel arches… 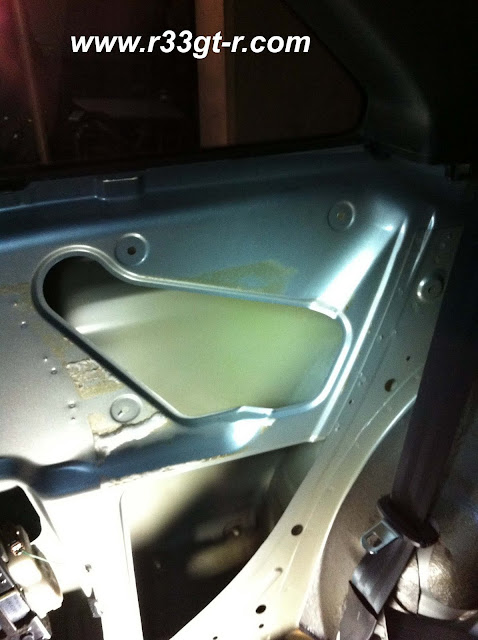 Anyway, will update later when I get everything done on the sound deadening project, will be an easier read I think. Although I have now as of this moment finished adding deadener, and the results are pretty good already - reduced noise from the rear, such that I can now better hear my engine, the clutch, and tire noise! And I have yet to do the doors!

Fuji Speedway run with SSCT coming up on December 23! Stay tuned…(will have a couple of interesting/fun mods before then…)
Posted by Aki at 10:59 PM 5 comments: