Over a year ago, when I embarked on the sound deadening project I had bought several spray cans of this:

Looking at reviews online in Japan, this product (the "Beat-Sonic Noise Reducer") was generally acknowledged as the best, not only in sound dampening ability, but also as a general undercoating (to prevent rust) in cars.

Luckily, as they don’t use salt on the roads in the winter, and also because I frequently wash my car, there are very, very few spots of rust on my car.  The few spots that I have spotted were surface rust on the car when I first bought it (mostly easily removed), and I haven’t seen any new spots since.  So really, there really is no need to apply an undercoating, so long as the car is in Japan and relatively well maintained.

Here is the worst of the rust. 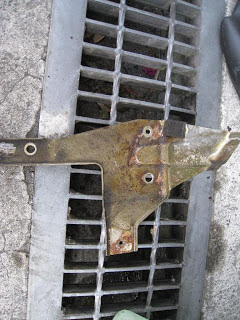 I was hesitant to spray this on for a few reasons – one obviously is weight, but the other was, would this material be removable in case there was a spot of rust that got out of hand and that panel had to be repaired?  Again, is it really necessary for me to do so?  Sacrilege to unnecessarily paint my car??

In any case, I thought I reached a happy compromise by deciding that I was going to spray ONLY on the inside of the fenderwells, behind the wheels, where I suspect most of the road noise was getting through (because the floor had been lined with the sound deadening material already, on the inside) AND because I planned to spray the stuff ONLY on the plastic fender liners.

So, I jacked up the car, took the wheels off, then liberally sprayed on some Simple Green to break down any dirt there.

And yes, I also took the opportunity to clean the wheels, especially on the insides where there was some brake dust. 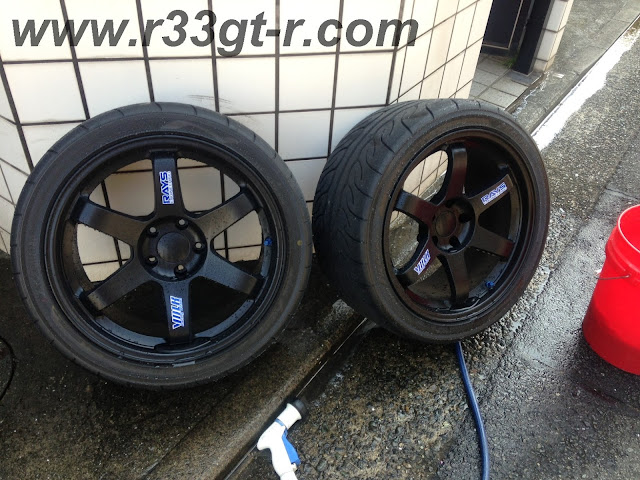 Oh, and yes, what a great opportunity to clean the R35 brembo calipers!

I then used my trusty Vapamore steam machine to REALLY get things clean. 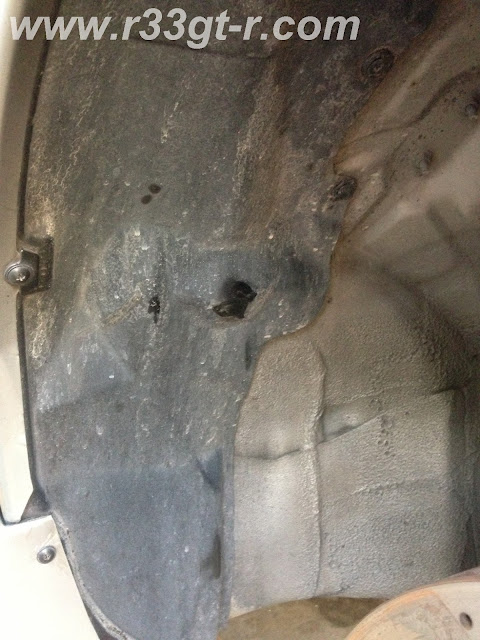 After (and after I started wrapping with newspaper): 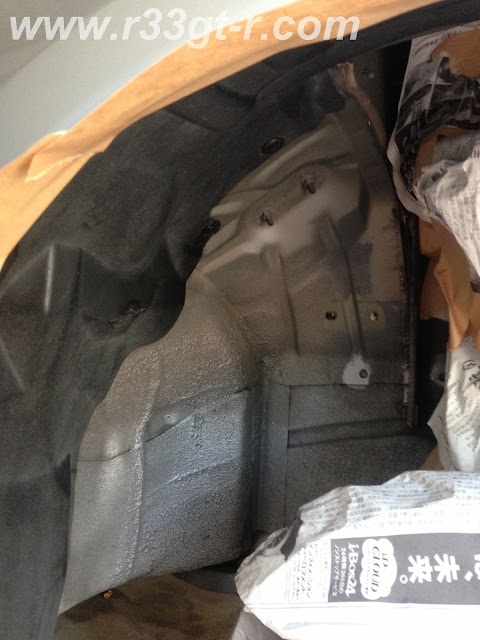 I then covered up all the important components with newspaper, and began to spray on the undercoating.  But then realized that, I might as well go for the metal too (which, I believe, already has a CLEAR looking (but now yellowish) factory undercoat in some places) 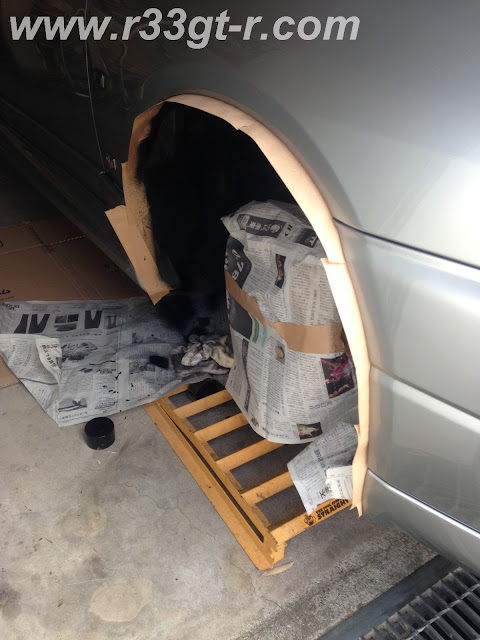 So here is how it looked after spraying on the undercoating.  In addition to rust protection and sound deadening, I realized then of another advantage – of making the inside of the wheelwells look dark, thus enhancing how the wheels look. 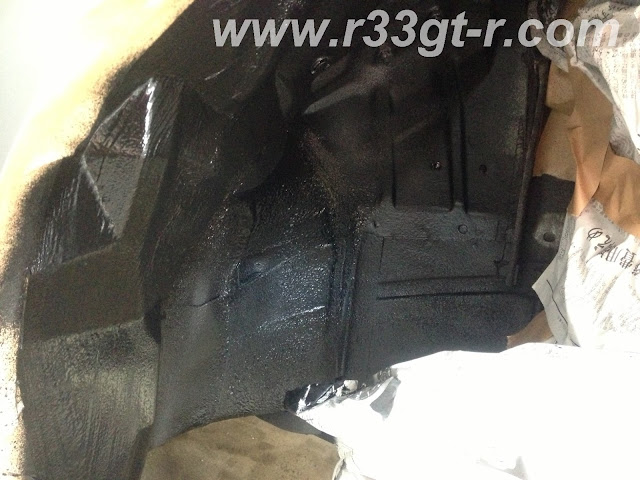 And the result? Nice and CLEAN and BLACK....lol.  Oh, and also as the pitted plastic liners are now covered with the deadening, hopefully they will be easy to keep clean now. 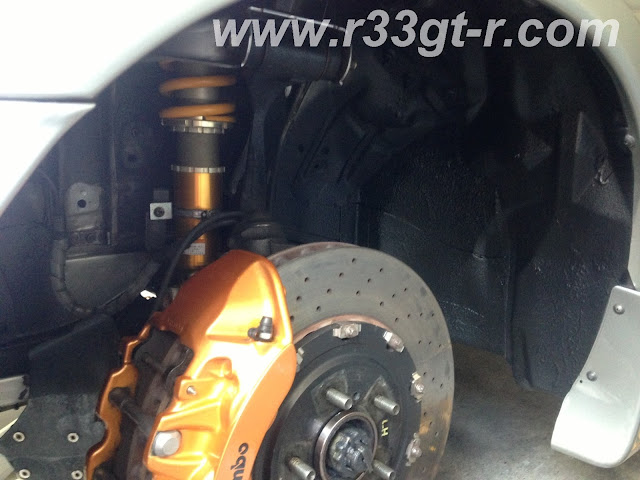 As to whether the coating had an effect on road noise, in my judgment, "yes" but only slightly. Then again with the Tomei Expreme exhaust uncorked, it was a bit hard to "hear" the difference over the exhaust note, but during the Izu Skyline run, it just seemed that under some circumstances, the car DID seem to have a bit less road noise...

This year, I have been too busy to take my car out on a proper drive. Lots of minor tinkering, yes, but not a chance to really enjoy the car for what it’s built for.

This changed when my friend Dino proposed a short drive trip up to the Izu Skyline road near Hakone, ostensibly to try out his new tire and wheel combination, but we both knew the real reason was for all involved to de-stress from our daily lives.

Here is the link to his fantastic as usual Speedhunters post. He does a better job than I could of explaining the route we took and the scenery along the way, so I won’t bother to describe the trip (please read his post) and further I have taken the liberty to borrow these photos from his post:

As Dino mentioned in his post, the three of us, Thomas in his Midnight Purple BCNR33, Dino in his Bayside Blue BNR34, and myself, first met up at the Ebina Service Area off the Tomei.


In addition, we met up with our friend Matt (BNR32 owner) who was on vacation in Japan and kindly agreed to meet us up there in his rented orange Z34 Fairlady. You can see it in one of Dino’s photos.

I also took some photos, but they were nothing special.  Matt had a decent camera with him and was kind enough to share his wonderful photos for inclusion on this blog. Here they are, and thank you again Matt!


So there you go... and for those of you who know me, yes, I was running a new "mod" which I will talk about in my next post. Stay tuned! 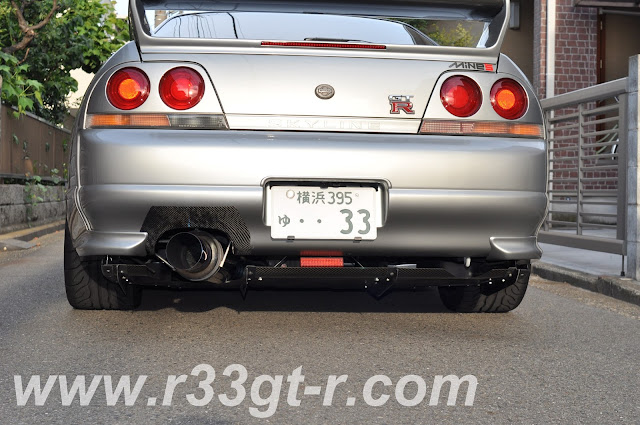 Continuing from my last diffuser post - the final step in the BNR34 rear diffuser project was to wire up the LED. So this is how I did it:

The LED unit itself has 3 leads coming out of it, labeled“+”, “-“ and “brake.”  The unit was described as having a“flashing brake lamp” a la F1 style, and my 12 volt tester confirmed this was the case.

In any case, the first step was to ensure that, should I have to remove the diffuser in the future, I would be able to disconnect the leads without having to cut any wires. So, I found and ordered 3 lead to 3 lead connectors, which I then soldered onto the ends of the wires coming out of the LED, as well as to 3 wires leading into the body of the car.

Next, with the wires being exposed to the elements, I wrapped electrical tape around the leads, and also used some protective heat shrink tubing for the LED leads going all the way into the body.  There is a rubber grommet (which has other wires going through it too - most notably the back-up camera leads) covering a hole just above the license plate frame, so I passed the wiring and the heat shrink through this. 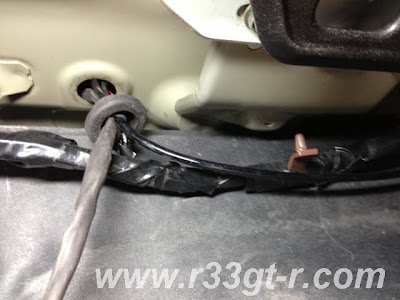 I then removed the rear seats, ran the wiring alongside other wiring, zip-tying strategically, and then routed the wire to underneath the center console.  I soldered on some connectors (one side the wires from the trunk, the other on the wire leads going to the switch), to allow for complete removal of the center console when necessary, and then ran the connecting wiring through the pre-existing hole that I had drilled for the ATTESA controller that never worked right for me. I made sure I used connectors, so if I ever need to remove the console, I don't have to cut any of these wires. 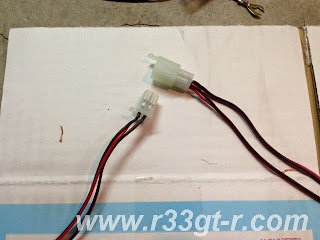 On the trunk side, because the wiring into the car ran on the left side, I opened up the rear left side light cover to access the wiring there.  I then cut two short pieces of wire, and soldered the ends of both to a two lead connector.  On the other end, I soldered one wire onto the lead for the running lamps (there was already two wires soldered together on the factory harness for the two left rear lights, so I simply soldered on top of that, rewrapping in electrical tape), and then used a tap for the other wire, which I connected to the brake light wire.  This two lead connector was then attached to the two lead connector for the two wires coming BACK from the main cabin. So now I had one long connection going from the bulbs to the center console. I used clips throughout, in case in the future I want to remove part of the circuit but keep other parts, with no cutting required.

For the lead coming from the LED unit, I soldered a connector to the ground wire and bolted it to the body. The remaining two wires - one being the positive lead for the running lamps and the other for the brakes - I ended up also soldering leads for connectors, to be mated to the appropriate connector for the wires leading to the main cabin area. So this was the other long connection, going from the LED to the center console.

So, I now had a complete (fairly long) circuit, broken only by a lack of a switch connecting the two leads coming INTO the cabin from the LED unit itself, and the two lead going OUT into the cabin to be wired into the brake light circuit.   Initially I had envisioned have one switch handling the ground wire only and serving as a master on/off switch, but then realized that I wanted independent control of the braking and the running lamp circuits, as the flashing red lamp clearly violates Japan’s shaken (road-worthiness) laws.Thus I ended up sending 4 wires into the cabin (2 in, 2 out).
Given the need to be able to quickly toggle the LED on/off from within the cabin itself (i.e. remember this mod likely is illegal on public roads), I spent some time looking for various switches which would work. Initially, I was set to use these tiny switches, with one switch being for LED to come on with the running lights, the other switch being for the LED to be wired into the brake circuit. 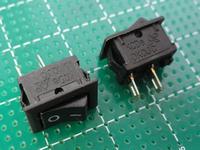 The problem, however, was that I now had the problem of how to affix these switches to the center console.  Do I carve out two holes directly? Or do I have some kind of bracket? Where would I locate them? Should they be visible? Or do I install in a hidden spot?

In the end, I finally decided that something that looked or was, OEM would be my best bet.
But rather than placing this switch next to the GT-R logo where it is normally placed: 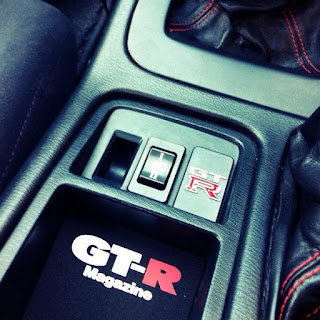 I decided to continue with the stealthy scheme and install inside the console.  So this required some cutting of the center console for the switch to fit.
Then, I discovered that while the switch fit perfectly, the switch itself was too tall, meaning I had to cut off some of the bottom of the switch, and also bend the leads on the wires so they could connect to the switch with minimal amount of wiring sticking out of the bottom vertically, where it was bumping into the G-sensor.


The end result, however, looks fantastic, is solidly mounted and is hidden.
Anyway, it all works perfectly in the end - here is a video showing the LED lamp in action: First, just the running lamps, then turning the switch on to get the running lamps plus the LED, then the brakes with the LED (see how it flashes), then release the brakes, then turn off the LED.


So now all that's left to do is see how the diffuser performs at speed...
Posted by Aki at 12:38 AM No comments: