So as I was cleaning out my garage the other day, I found this - something I purchased, I think, over 10 years ago! 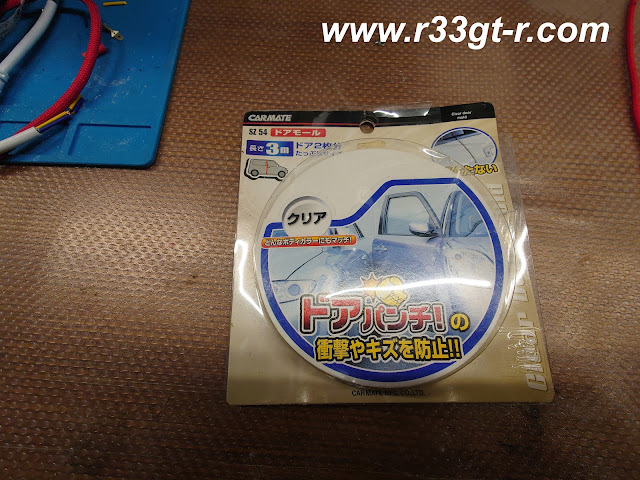 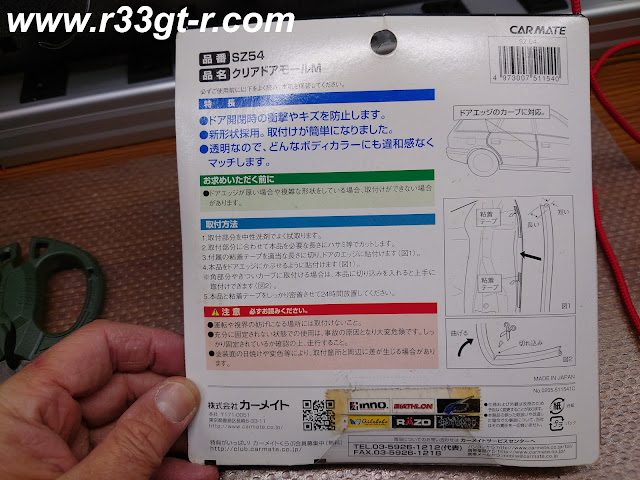 Of course, me being, me, I have already lined my garage strategically with soft foam where it counts, so I never have to worry about my car's doors getting scratched up if I happen to open a door carelessly while the car is parked.

But what about out in the wild? Maybe I should take pains to do something to add some protection? Either that or maybe I will always park away from others...

Since installation is literally by way of a pair of scissors and the included double stick tape, I will only show you the end result on the passenger side. 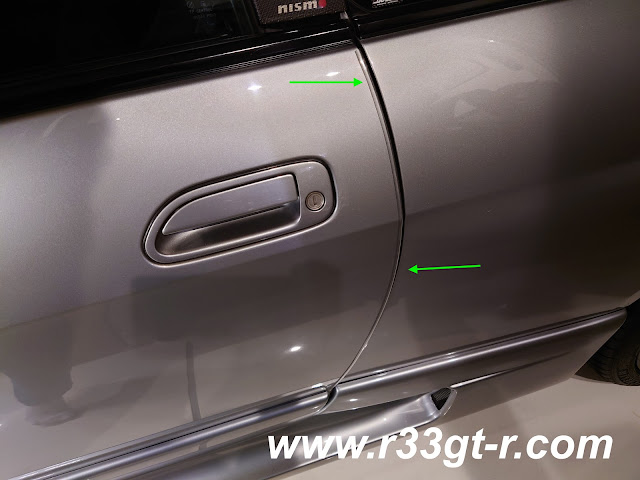 First, I wonder if the tape will continue to be effective, or will the clear molding end up as trash somewhere on the road, ripped away by the wind?

More importantly, is this easy mod just too dorky for my car? Let me know what you think! (I actually think this might be a period correct mod...)

And not to worry - I should have a much more interesting and lengthy garage related post up in a few days. Check back soon!

So at the OS Giken booth during my walk around R's Meeting 2022, I found this: 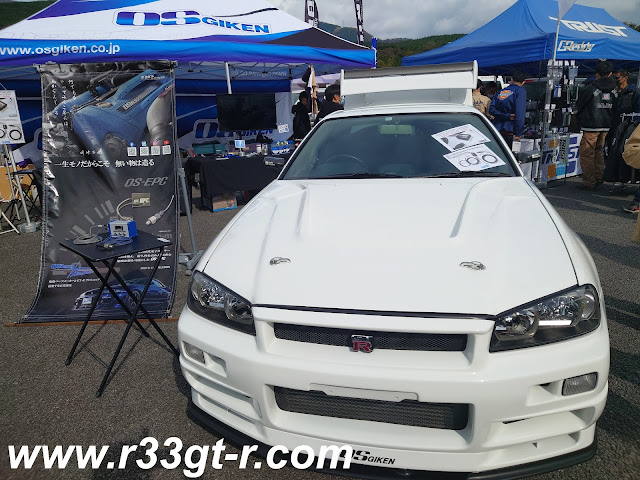 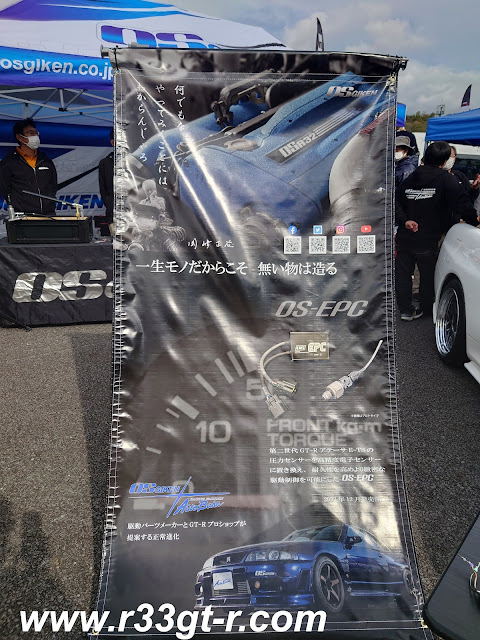 Describing something called OS-EPC - Their easier to read Facebook page has the same the text below the OS-EPC prototype unit photo - "In replacing the pressure sensor of the ATTESA-ETS of the Second Generation GT-R with a highly accurate electronic sensor, precise drivetrain control from increased durability."

So when I asked the guys at the booth, they told me that the ATTESA-ETS pressure sensor is something that is no longer available new but is required to function in order for these cars to pass shaken. And, they have been getting increasing numbers of cars with problematic (aging) pressure sensors. So, OS Giken decided to work together with GT-R specialist shop Racing Factory Autobahn (their demo car is the blue R33 GT-R shown, and they also have a yellow R33 that has lapped Tsukuba in about 56 seconds!) to develop a modernized electronic version of the OEM mechanical pressure sensor.

As the Facebook advert shows, this new part will be available starting in OS Giken's online store, OS Factory Line, beginning in December of this year.  I recall them telling me to expect the price to be about 150,000 yen.   Interestingly, they also told me they are experimenting with a version that can be user modulated/controlled so potentially one could control how quickly ATTESA-ETS reacts in a given situation - for example, with some lag for track days but super quick/OEM on the road for example. However they could not give me pricing nor timing on this, but if they go through with it I expect the price will be twice as much and timing would likely be mid-next year.  I guess we can wait and see.

I did a quick Google search fro OS-EPC and found this Web Option article - which shows these two photos of the basic prototype unit.

So has anyone had any problems with this ATTESA-ETS pressure sensor? To be honest, when I had Nismo Omori Factory redo my car's chassis, there was no mention of this.  Rather, they did get me a new nitrogen accumulator.

In any case, you can bet I am very interested in this new tech.  The other tech I am interested in is some kind of digital version of the yaw rate sensor which I have been thinking about since this post back in 2014!

Ok next post I'll be talking about some more mundane stuff. Check back soon!

So I've been skimming some of the social media coverage of the R's meet lately, and one tuner/booth that seems to not get much attention is the one for NAPREC, short for Nagoya Precision.  Established in 1997 by Minoru Nagoya (yep, so the company is not named after the city), everyone in the aftermarket engine tuning world here in Japan knows about NAPREC.

It's no secret that, if you want your rebuilt engine to perform at its best for its specified usage, you get in line and send the cylinder head in to NAPREC to be machined properly, so as to allow for the use of bigger valves, ensuring the smoothest flow of fresh air into and exhaust out of each cylinder, and changing the shape of the combustion chamber, to give a few examples.  Check out their high-response menu. A not so well kept secret is that all the big name famous tuning houses send their engine heads into NAPREC - I recall Nakayama-san at Mine's telling me that he used to spend hours himself manually porting out the intake/exhaust ports for each engine he worked... but given the stuff that was included in the menu for my engine, I am pretty sure for the rest of the nifty bits added to my car's engine - strengthened valve guides,  intake valves, etc. - the head was sent into NAPREC.  In any case, for sure now, given how busy Mine's is, I am sure they outsource most of their cylinder head work to NAPREC (confirmed by Nagoya-san at his booth...)

Anyway, I wanted to share a few photos I took at his booth.

Ok so this is an RB26 head, but check out how each cylinder combustion chamber is shaped differently in order to demonstrate what NAPREC can do. 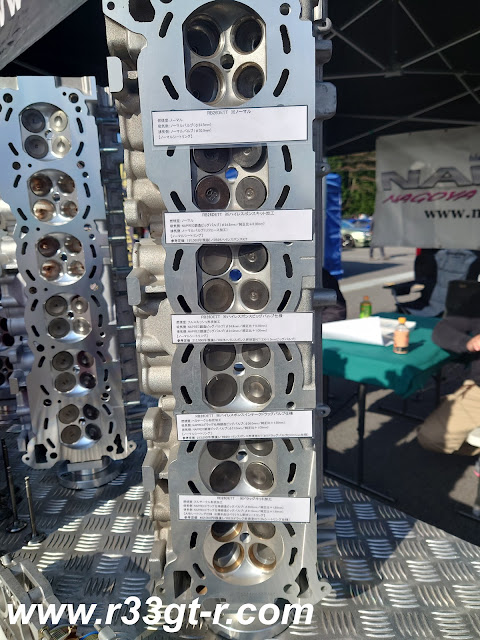 Here are some close-ups, starting at the top.

I guess the bigger valves make sense, but I was most curious about the different shaped combustion chambers.  Check out this NAPREC webpage for details.  Interesting that the OEM combustion chamber has a volume of 65cc, Full Squish is 69.5cc, Hemi circle is 70.3cc, and Full Circle is 71cc.

So even though the Full Squish looks pretty OEM, it actually provides the biggest step up in volume, with Hemi and Full Circles only being with 1.5cc of the Full Squish.  And yes I asked and my Mine's engine should have the Full Squish (and yes it seems that way in checking this old blog post).

Anyway, it was nice to learn something somewhat mechanical - and yes basic - but hey some of these things you have to get up close and personal to really appreciate the precision that is required to produce super smooth and responsive engines.

In my next post, I am going to try to explain something very interesting I found... a possible future product which I am definitely interested in...