R33 vs. R34 GT-Rs, Continued - Objective Differences (and what happened at Nurburgring, anyway?)

As comments to my last post have shown again (because this is a common argument amongst GT-R owners), people tend to like one car model over the other for subjective reasons.  “This one looks better” or “this drives better” or “this one has more road presence,” etc.  And there is also a lot of erroneous information out there too, most notably “the R33 GT-R is heavier than the R34 GT-R.” It’s not, the specifications by Nissan clearly show the R34 was 20-30kg heavier than the R33. (And they would have no reason to lie, they WANTED the R34 to be more compact (hence the shorter wheelbase), because one of the criticisms about the R33 were that, compared to the R32, it was heavier and bigger).

Therefore, I think the only measure of “better” I can agree with is, a comparison on an objective basis – what was changed and why (from a mechanical/engineering standpoint), and the effect that would have on the car (how the improvement was manifested).  So, I have begun hunting for written materials, preferably in Japanese with interviews of the actual technicians, engineers and test drivers who worked on the cars, discussing these changes.  Finally, it would be ideal to have an article discussing the difference, if any, these mechanical changes made in the official lap times of the R33 and R34 at the Nurburging.

Although I’m still looking for other articles, here is one I found which I think does a nice job. From Gold Mook GT Series, "BNR34 最速の証明"(BNR34, Proof of Speed), February 2, 1999, which was published when the R34 GT-R was first introduced. It traces the history of testing at Nurburgring for the three second generation GT-Rs, and talks in general terms about the mechanical differences. And most importantly, its job is to excite and inform the reader about the BNR34! 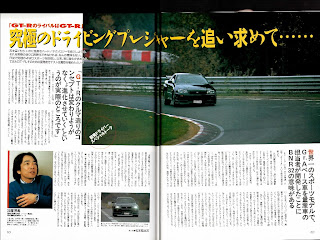 The article begins with the history of the GT-R, and discusses of course the R32 GT-R. One of, if not the first Japanese car to be tested at Nur (and this was in spite of the fact that it was for the JDM market only – but this was done to show that its potential was up there with European rivals), Nissan began testing the R32 GT-R components in an S13 Silvia with an elongated bonnet.  In final production  form, the R32 GT-R was able to turn in a best time of 8 minutes, 20 seconds. Nissan test driver Kato (guy in blue sweater, left), recalls “Looking back now 10 years ago, the R32 GT-R could not run properly at Nurburgring. We exerted extreme efforts to get it to run at the Nurburgring.”

So for the R33, the mandate was clear –to go even faster, with higher abilities.  So the R33 came with ET-S PRO (active diff), 17 inch wheels, Brembos, electronic HICAS, etc. – all in all a technically much more advanced car than the R32. Thus equipped, we know that the R33 was able to shave 21 seconds off the time of the R32 – for a record setting (back in 1995) time of 7 minutes, 59 seconds, set by Dirk Schoysman. This result was heavily publicized by Nissan, the first production car to break the 8 minute barrier.

So what happened for the R34? The article does not give a recorded best time, nor does it even mention if the R34 was faster than the R33.  But the interviewees reveal that, faster is not what they necessarily wanted. They also talk about the mechanical changes that were made compared to the R33, and why. 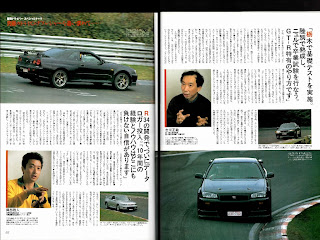 Mr. Yoshikawa, (pictured in black, left), who was in charge of product development and testing, explains that “with the R34, we asked ourselves, how can we improve on the R33?” Mr. Okabe (in yellow, left), explained further, “the R33 is most definitely a fast car. But a GT-R is supposed to be fast. From our perspective, we felt the R33 was a bit abrupt and severe at the limit. So our focus was on improving control at the limit, in order to make it a car that was more enjoyable to drive.”

First discussed was an improvement of body rigidity. This was necessary to begin with, as in initial planning it was decided that the car would have 18 inch wheels, and there would be an increase in torque (note: at the time the article was written, the manufacturers still had to pretend that the maximum horsepower the cars produced was 280 ps – but there was no gentleman’s agreement to limit increases in torque, even though the reality is that every increase in torque also meant an increase in horsepower).

Next up were the aerodynamics. Using data from their racing experience, they first outfitted a front under-panel, which made immediate improvements. Then, of course the rear diffuser, which test driver Kato claimed “made an bigger difference than expected.” The effects were felt starting at 80kms per hour. The benefits were an increase in steering feedback, and strangely, quieter running. At Nur, the body stayed planted to the ground, and not with excessive downforce.

Strangely, these are the only two differences mentioned in this article. The rest of the article talks about testing methods (how they used a Multi-Road Simulator to test body rigidity, for example, as well as, for the first time, an onboard Marelli data logger).  There is mention of course of the shortening of the wheelbase, but not on its effect, performance-wise. No mention of weight differences, nor changes to the suspension geometry, etc.

So what can we conclude so far, based on this article? Yes, there were objective improvements made to the R34 over the R33. But nothing that would make the car “faster” per say. Easier to drive, maybe.  And when you think about it, I would argue that is what Nissan has done with the R35 as well – made it incredibly easy to drive fast.

As someone who enjoys actually driving his car, versus being taken for a ride, these second generation GT-Rs are the way to go. AND, on a SUBJECTIVE basis, the R33 is the best fit for me.

As before, would love to hear everyone's thoughts on this topic.

Here is a historical list of lap times by various cars at Nurburging.
http://en.wikipedia.org/wiki/List_of_N%C3%BCrburgring_Nordschleife_lap_times

Note2: Apologies also to those readers who were expecting another parts review or tweak on my car. With the horrible weather and a busy schedule, have not had time to do much to my car other than keep it clean. Any spare time at night I am either working, writing for GTROC.org (follow my weekly R35 GT-R build) or trying to catch up on sleep.  This however should change in the near future, with the warmer weekends ahead. I have several projects in the pipeline yet!