This post was a long time in the making.  Back in August, I posted this hint - I was being vague on purpose as to what my car was at Nissan Prince for:

A close up would have revealed: 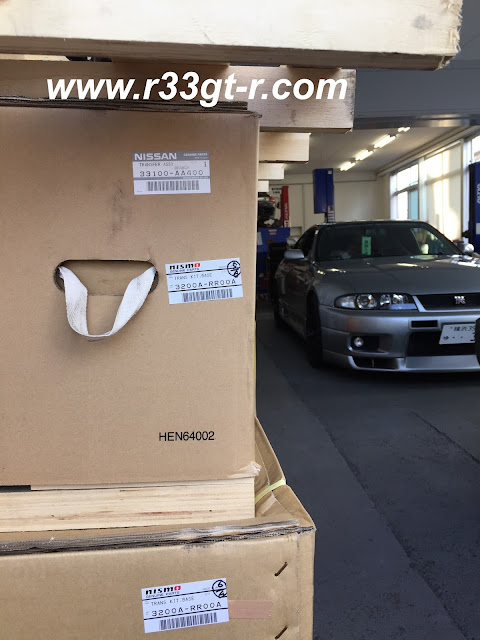 For those who guessed correctly, yes this close-up of the boxes that the transfer and the transmission came in would have revealed what was going on! Yes folks, it's the NISMO GETRAG Conversion Kit for the R32/R33 GT-Rs!

Turns out, these Conversion Kits are "made to order" - so I had actually placed my order back in June but it wasn't until August that the parts were all ready to go. So really, this whole process started back when I did this post about NISMO's engine oil. You didn't really think I went to Nissan Prince for just an oil change, did you?
(The reason I installed a new gearbox was, as longtime reader stj88 guessed in the comment below, my OEM gearbox was on its last legs. I was having trouble shifting from 3 to 4, or 4 down to 3, so I would sometimes skip 4 altogether and just shift into 5th directly from 3.  This had been going on for the past 2-3 years but had been getting progressively worse. Plus, it felt to me that the transfer was slipping too...)

Then, although the installation of the Kit itself only took a week, not only did a custom part for the Getrag take longer than expected (the Robson item below),  I got lucky with the N1 bonnet, which required having the car in the paint shop for awhile, plus I was away for a couple of weeks, so from start to finish the car was at Nissan Prince for about a month.

For those who want a refresher or just more information about the GETRAG kit, check out this link on NISMO's English website.

In any case, here is what the Kit looks like:
In addition to the transfer case and the transmission itself, the kit comes with a BNR34 front driveshaft, a "NISMO" r32/r33 rear drive shaft (somehow I doubt anything special was done to it), and BNR34 transmission mount and cross member. There are other bits and pieces too as explained in the NISMO link above.

I actually had the dealership take photos of the work during the install. Unfortunately, they appear to have wiped the computer clean, as the jpegs could not be found. But, they HAD printed out some small photos which I scanned back in - hence the low quality, but I think you get the idea:

Here is a better photo of my old transmission, removed, that I took:

When I arrived to pick up the car, the first thing I saw when I looked inside the car was this:
A closer inspection of the shift knob shows:
Lastly - before I could get in the car and drive home, they had me sign an application Nissan is going to submit to the department of motor vehicles on my behalf- changing out the transmission is considered a major change to the car, so technically my car is no longer a "BCNR33" - it's now a "BCNR33改" (the character is read "kai" from 改造 (kaizo) meaning modified so it's a BCNR33-kai). The paperwork they submit demonstrates to the authorities that the gear ratio has changed but is still within x% of normal, only weighs y more kgs, doesn't change the overall dimensions of the car, etc.

Ok so enough of the install - the all important question - HOW DOES IT DRIVE?

Well, it's like being in 1/2 lower gear in the 5 speed, all the time. Acceleration of the car is instantaneous. Expected when the rear ratio is still 4.11:1.

The engine is turning at above 2000 rpm at most speeds, meaning that that it picks up quickly, acceleration comes on much more quickly, but yes probably worse gas mileage and noisier on the expressway.   Does it bother me? Honestly, yes a little. But I'm not about to spend another 450,000 yen for NISMO's 3.916 gear set, which if you look at the graph, really only changes things by about 500rpm or so.

I guess to make it perfect, I would really only want to change 6th gear to be an overdrive to allow for relatively quiet and low rpm cruising on the expressway - right now it is a literal "point and shoot" weapon even in 6th, given how quickly the car accelerates. The other gearing is fine as is.

In any case, I was told that I have to break this new transmission in - and that this would take about 1000kms.  Given how little I drive my car, not sure how long that will take, but it DOES give me an excuse to take the car out more often.

There are other small details that bother me too (in addition to the stitch color I mentioned above).  The gear shift itself is tall - remember for the OEM gearbox I had installed NISMO's solid shift gear shifter which is 7.5mm shorter in length and gives a more solid feel when shifting.  Not sure who makes a short/solid shifter for the Getrag box but will have to see if I can find one.

Anyway, the fun continues as I break in the gearbox and make the necessary improvements!

In my next post I'll go more into detail about that N1 bonnet...