A Recent Video Review of the BCNR33!

Well it was bound to happen. Someone saying nice things about me, this blog, and of course the R33 GT-R.  Thanks to Paul and Derek from Let's Drive Japan.

"Full disclosure"-  I know both of them but I really had no idea they would be reviewing the 33 so early in their series (although, I was meaning to suggest they do so soon in their series).

What I found interesting was Derek's immediate analysis, compared to the BNR34. He's right, the BNR34 is "more refined and softer" - as you may recall from reading this blog, that is exactly what Nissan wanted, as they felt that the BCNR33 was fast enough, but it took a skilled driver to get those results.  And having driven a stock BNR34 myself, I was surprised that it felt more like a luxury car (in terms of smoothness of ride and the level of power assist) than a sports car, at least at around town speeds.

I suspect that this car they drove was fairly stock. Perhaps I need to extend them an invite to drive my car?

Meanwhile, well done boys, keep the videos coming!
Posted by Aki at 5:13 PM No comments: Links to this post

So as I described in yesterday's post, we (ClubR33) had ordered custom titanium bolts for the engine's Rb26 front cam cover, the CAS, and the coil pack cover - some 18 bolts in all.  In "burnt blue," "nitride gold" and "nitride black."

Of course, as I send out the bolts to the ClubR33 members who ordered, I wondered how the bolts would look on my car. So I took advantage of a rare break in the rain and took the follow photos. Enjoy! 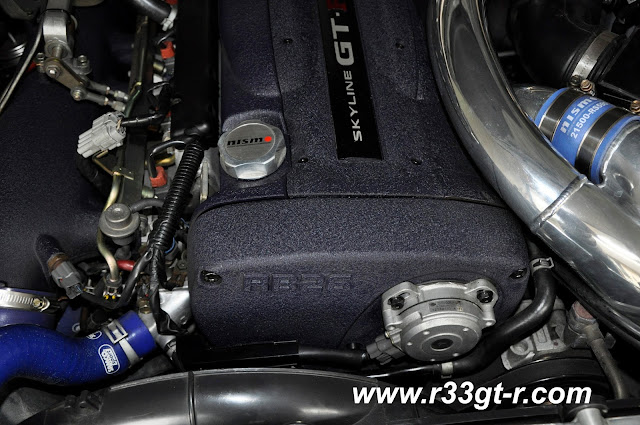 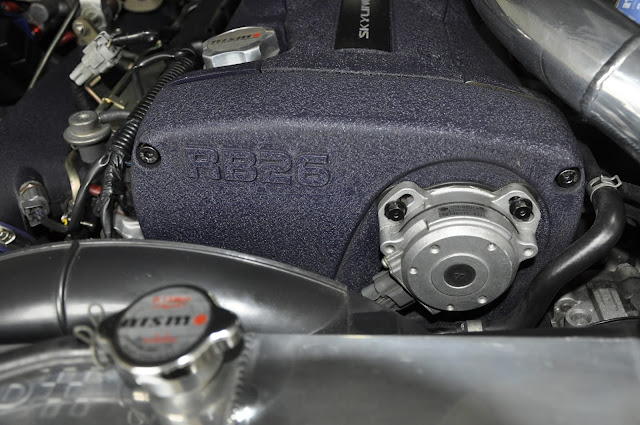 So which do you like the best? For some reason, I am drawn to the black ones. Understated, but with purpose. The gold is too flashy for me, but I think of the 3 colors I like them the best (overall finish, and color quality).  The burnt blue is attractive, but honestly the coloring is quite susceptible to scratching (not important under the hood, really), and the coloring is not consistent (actually that is good, no one will have the exact same set) and so for someone with OCD like me, sticking to a solid color may be the way to go. I guess I will just have to experiment...

Weight Savings!
And of course, for those who may be skeptical of the whole exercise, these bolts DO have a practical purpose. Being titanium, they ARE lighter than the steel bolts they replace.


So in total, we would have 26 + 27 + 15 = 68 grams of weight savings! LOL. As you can see, no one can deny that they do not have an actual purpose, although I am sure there are more cost effective ways to drop weight from the front of the car!

What do you guys think?
Posted by Aki at 6:00 PM 14 comments: Links to this post

As many of you know, I am quite active in ClubR33, the invitation-only R33 GT-R owner's club Facebook group. It's a great bunch of guys and because it's closed to the public (we screen potential members before we allow them access) we can focus on, and be proud of, all things R33 without worrying about the usual detractors we often see in more public forums.

Anyway, one of the nice things of belonging to a group like this, is that we can embark on projects which might not be worth doing by oneself.  For example, after we discovered that, someone was selling colorful titanium bolts on eBay for RB26DETT engine bays, but at a premium, I wondered if the Club could do better - could we, for example, have the OEM engine bolts replicated, but also in titanium? And in attractive colors? Would it be expensive and not worth it?  I mean, this DressUpBolts guy is smart, by limiting the dimensions (both threading and the heads which area all Allen head) of the bolts he offers, he has enormous economies of scale. 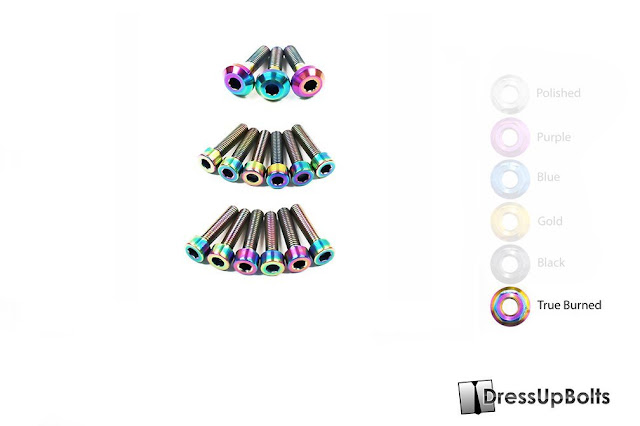 In any case, I put out some feelers on Alibaba, the e-commerce site that connects the world directly to Chinese factories, and found a dealer who not only was willing to do the job, but impressed me by taking the photos of the measurements I took of the following bolts (these are just a few):
and coming back in a few hours with the following:

Anyway, I was pretty happy with how these guys understood how picky I was. I wanted exact replicas of the OEM factory bolts, and I wanted them removable by the same tools as the OEM bolts as well.  Hence it was very important to get the dimensions correct, not just of the thread but of the heads as well. The only compromise I made was on the CAS bolt. Instead of a having a Phillips head, the factory only felt comfortable doing an Allen head. But I realized that I usually use a socket wrench for this bolt anyway so in the end I capitulated.

Because the factory however required a minimum order of 100 bolts, this is a project I would not normally do on my own. But, with several like-minded members, this was a go! And, the pricing would be much lower than the generic aluminum and titanium bolts we had seen on eBay.  So we placed our first order and a few weeks later received this:
We were thrilled - these came out much better than we had anticipated. But then, there was overwhelming demand - while an earlier poll had shown that only a dozen or so members expressed interest, once people saw this photo there was more demand than available bolts.  Luckily someone then pointed out to me that, we were missing one bolt, the third short bolt found in the middle of the RB26 front cam cover. Oops.  But just the excuse I needed to order some more and have enough for everyone.

And, based on demand, we (the admins of the Club) decided that we needed to make these bolts even more special.  The way to do that, would be to have one or more of the bolts laser etched with "ClubR33." A small detail that reflects the Club brotherhood!

So I placed another order, and in addition to the missing bolt and the engraving, ordered the bolt set in two anodized (actually "nitride") colors, gold and black. This time, the wait took longer, but the results were definitely worth it.
So far, so good. But I wondered, how good would these bolts look on the engine of MY car? Check in tomorrow to find out...
Posted by Aki at 3:58 PM 14 comments: Links to this post