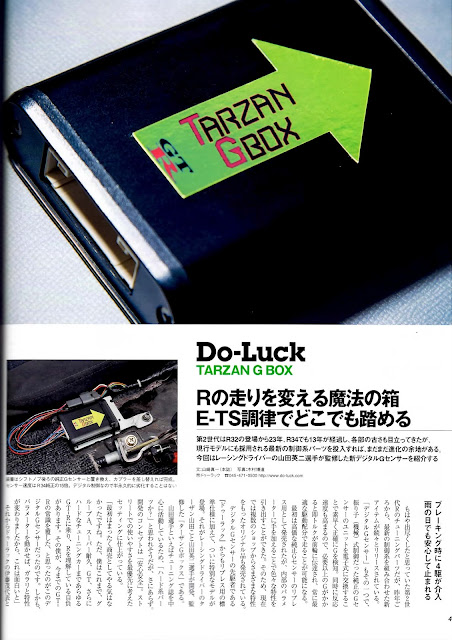 pg42:
Title: Do-Luck Tarzan G-Box
The Magic Box that changes how the R drives. Modulates E-TS, can step on the gas at any point
With the Second Generation - 23 years since the R32 was released, 13 years since the R34 - the age of all parts are becoming readily apparent.  However there is still room to improve, as modern parts like those used in current cars become available.  This time, we introduce a new digital G-sensor developed by racing driver Eiji Yamada.

All 4 wheels intervene during braking; can safely stop on rainy days.
Even though we may have thought that no new tuning parts were being developed for the second generation GT-Rs, from around last year we have seen, one after another, the release of various new items using the latest technology.  The "Digital G-Sensor" is one such item, with electronics replacing the pendulum-based (mechanical) OEM G sensor units, resulting in fast and accurate G detection. At the same time, response times improve, with available torque being shifted to the front wheels when more than necessary G forces are applied, allowing for driving under always ideal power distribution.

In the beginning this was sold as a replacement for the very expensive OEM unit, but with adjustments to settings, different abilities were able to be drawn out.  For this reason, at the present several shops sell different units with different characteristics.

Do-Luck, the pioneer in the digital G-Sensor, now adds to their standard replacement unit by the introduction of a special model. - the "Tarzan G-Box," developed by racing driver Eiji "Tarzan" Yamada. With Tarzan's driving being featured mostly in tuning magazines, one might think, "is this a hard (ie race-type) tuning part?" but that is far from the truth.  The unit was designed for "safety and security" with the settings giving primacy to ease of use on the streets.

"In the beginning I had no intention of selling anything. However, until now I have driven GT-Rs in Group A, Super Taikyu, GT, and various extreme tuned cars, so I can boast that I really understand GT-Rs. But for me, what defied traditional wisdom with the GT-Rs was this digital G-sensor.  Further, by changing the parameters, it would clearly change the characteristic of the car, and I thought this was interesting."

From there, together with Do-Luck president Shigeru Ito, Yamada comprehensively tried various combinations of driving area/tires/cars, modulating the parameters until he was satisfied.  "I set it so that, no matter what the environment there would be slight understeer. This is in fact the fastest, and also feels the best.  We set it so that it is seamless, so that when someone gets in a GT-R for the first time, they believe that this is OEM.  This also contributes to the feeling of safety."

When actually comparing between OEM and the Tarzan G Box on an R32, if you are not thinking then you would not be able to tell the difference.  However, as you gradually increase the speed range, you can begin to see that the stock has its unique understeer, then oversteer, but with the Tarzan G-box the car always has slight understeer, resulting in stability of the car's movement from start to finish.

If, during cornering you purposely open up the steering, or step on the gas more, the car will show a bit of involving (?) behavior, but this is quickly restored to normal. It's stubbornly keeps a slight understeer at all times.

Under severe braking, power goes to all 4 wheels, the ABS also activates, the car shows stable, perfect braking using all 4 wheels.   No doubt this will be a great weapon for use on wet and slippery roads.

"However, no matter how good of a product we make, unless we understand the ATTESA-ETS we are wasting a treasure.  Firm deceleration, and firm acceleration. Varied (but balanced) driving is how a GT-R can be driven quickly.  As this is the first part I am introducing, I wanted to make no compromises. This is why I am quite confident as to the finished product.  Once this is recognized, I would like to introduce a second, and third round of new parts."

Pricing is 18,900 yen more expensive than the standard model, at 60,900 yen. This will definitely give you that safety and security.  No doubt a good buy. 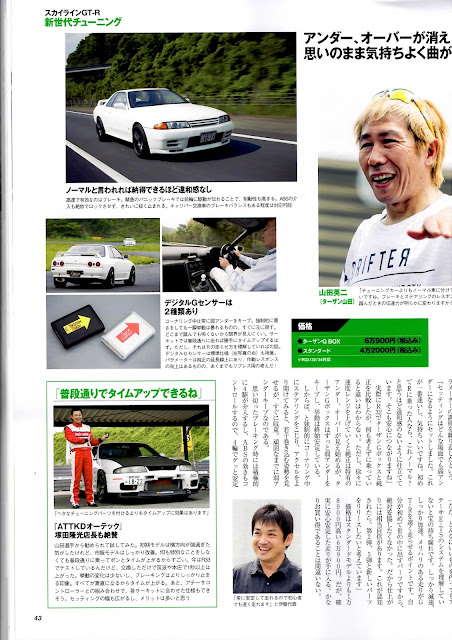 Pg 43:
Caption under R32 photo: "So seamless, it feels OEM. Noticeable at high speed is the braking. During panic braking, power gets transferred to the front axle, improving controllability.  ABS comes in superbly preventing lock up, ensuring clean short stops.  Improves braking balance of those cars with aftermarket calipers."

Caption under 3 photos: "Two types of G-Sensors. While cornering, it maintains a constant weak understeer.  Even if you forcibly do something bad, there is a moment of disarray but immediately reverts to normal. Hard to gauge your limits because you are no longer afraid no matter how much you step on the gas.  Just driving as you normally do on the circuit, your times should improve.  However, that is only true if you really understand how to drive a GT-R.  They also have available a standard spec digital G-sensor. The parameters are extended beyond the stock unit, improving response, a real replacement unit!"

Caption under Tarzan Yamada: "I would hope that it gets installed on normal cars, not tuned cars. The response of the braking and steering, and the communication when you step on the gas, clearly changes"

Caption under picture of Ito-san: "Even beginners can drive quickly as the car is always stable."

Inset Box of Driver with tuned R33:
Title -  "Your time improves by driving as usual"

below photo: "instead of installing some weird tuning part, this is effective in improving your lap times"

Takamitsu Tsukada of ATTKD Autech: "Racer Yamada recommended it and I tried it. The initial model was a bit too strong in the sideways direction, but the production model is perfectly improved.  What is amazing is, you don't have to do anything special, just drive as you normally would and your times improve. I am currently testing this R33, but just by installing, I have improved my times at Honjo and Tsukuba by over 1 second.  There is very little change in movement, and it appears that I can brake even better.  Times improve because everything is now more true.  Also, I can combine with an ATTESA Controller, and change specs for each circuit.  As this improves your car's settings, this device has lots of merit."

Thanks for the translation!

Thanks for the translation.
I'm more and more tempted to buy one for my own car once she will be on the road again.