So as we saw in my last post, I took the opportunity while my car was at NISMO Omori Factory to have them remove all the worn out, rusted and otherwise ugly suspension links and related parts off my car and replace with new.  Of particular interest to me was the rear suspension member - usually the bushes there harden or deteriorate with age and then the traditional easy solution is to add solid collars between the body and the member - I have not had that done yet so can't opine on whether that is the right solution, but certainly for most owners who don't want to bother removing everything to get to that rear member in order to replace the bushes, the solid mount solution is probably adequate, eliminating any weird flex.

One of my first upgrades to the car, before installing the Mine's engine, was to begin upgrading the suspension and chassis with the full Nismo suspension link set. I remember how the car immediately felt much more controllable and stable when I had the work done back in 2006 and 2007.  That means that for the past 13 years - longer than the time when the car ran on its OEM links and bushes from 1997 to 2006 (9 years) the car has been on the Nismo link set.  I don't know what the common wisdom is for when suspension link rubber bushes need to be replaced, but new ones should definitely give the car a "new car feel." I am looking forward to experiencing the brand new car feel!

Incidentally, I also have a full set of the SuperPro poly bushes, but never got around to installing them. Of course, now that I have a spare (used) set of the Nismo links...

Anyway, let's take a look underneath.
Of course the front is also looking great! Nice and clean... 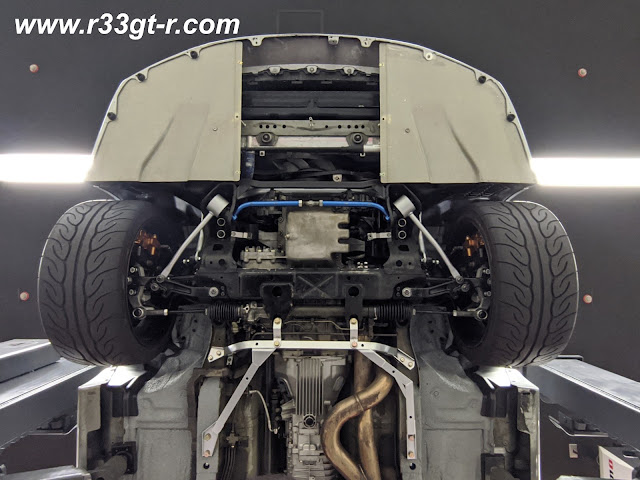 So a few things. One, they removed the plastic brake air guides - they were broken as the upper fin parts had snapped off.  These original Nismo ones, no longer available, cost about 19,000 yen per pair but the new dry carbon ones Nismo offers cost about ten times more! Not sure if I want to pay for parts my car probably doesn't need, given the oversize R35 brakes I now have. I guess I COULD go aftermarket here...
Two, you may have noticed Omori Factory removed the Do-Luck floor support bars. The mechanics didn't really care for them not because they don't work, but because they interfere with their car lifts.  I will have to think about how to get them back on.  More importantly, I wonder how the car drives without them on. Maybe not go for them any more but look into spot welding around the door frames...They also removed, I think, the Spoon Rigid Collars (at least in the rear) - these will be an easy fix.

Three, yeah my tires are old. Will have to replace them soon.  And yes they look huge, very meaty. NISMO is pushing me to replace with the Michelin Pilot Sport 4s, but I don't know. Doesn't feel right to put on French tires on a Japanese car...And what is the current best Japanese tire out there?

Four, yes there are still many parts that need to be refreshed. Financially speaking, this is all I could afford at this time. Plus, most parts can be cleaned up or replaced at home, so I intend to do that as much as possible. To me that's part of the fun of ownership.

Fifth, I did mention in a previous post that Omori Factory did a few special extras - that's for the next post!
Posted by Aki at 11:07 AM

I really like what you've done with your car over the years, and I'm looking forward to read about your overall impressions of the chassis refresh. Are you planning to share an overall ballpark figure of the total cost for the job? I'm in the US, and I'm considering purchasing a high mileage R34 GTR. I'm considering doing a chassis and engine refresh since the car will be sitting in Japan for a few years.

Wow! That looks great!
Get the Nismo dry carbon brake air guides, you know you want them.
For tyres, I've been using Bridgestone RE-71R and highly recommend it. I believe RE-71RS will be out very soon. So you can check those out too.

Anon- well as you know the Nismo tax means that you could probably get the equivalent done elsewhere for much less. I will have to double check with the guys at Nismo again, but I think prices for the chassis refresh menu begin around $15K USD, depending on the extent of the work you want done. What I would do is to find a reputable tuner who can work with the same parts but charge labor at a much lower rate. Of course you won't get the Nismo build plate, but is it really worth the money?

Matt - hey thanks! Good to hear from you. Yeah, I do secretly want them but when the cost is super high don't know if I can justify. Tires - will look into them, thanks! (although I noted an R35 today and it was on Michelins too...)

I am thinking about bringing my R33 back to Japan after college in the US. I had some work done here in the US and some parts of the chassis were damaged when lifting the car up... I am really angry with the terrible working quality of this country. =_=

Well, my car is not as good as yours, I reached 150,000 km by the end of 2020. I am thinking about to have a chassis refresh at Nismo later. I wonder if they can fix the chassis and paint it like how Yoshida does, and does it worth the money?

I am sorry to hear about the damage to your car... yeah having grown up and lived in the US for a while, I will agree that many times the quality and customer service simply is not as good as here in Japan.

Sounds like however your car is running well, to hit 150,000km! Congrats! I am sure they can fix the chassis and do a repaint, but whether via Garage Yoshida or Nismo... be prepared to pay a lot of money, it will not be cheap. I would put aside at least $25,000 for the bodywork alone, before the Chassis Refresh is done.

I was thinking about a repaint, but then when the guys at Nismo said that my car's body was in great shape, decided to only do the underside only, to refresh that, since the entire suspension had to be taken off anyway.

Good luck with school and reach out when you get back!