Picked Up The Car Today from NISMO! (Part 1)

So the day we've all been waiting for finally arrived. After taking care of things around the house (i.e. cleaning the garage) I jumped in a taxi and arrived at NISMO Omori Factory 25 minutes later. My extremely useful friend Alessandro was kind enough to meet me there in his Z to take photos and help me haul back all the old parts.  Clearly the Nismo guys were wondering what he was doing there, AGAIN, but this time it wasn't to spend his money - the day had come for me to open up my wallet and make a donation to Nismo.
All in all, while like anyone else I like a good deal, I have to say that, for the quality of the job, the price I paid was fair.  More on the quality and my drive impressions later.


One of the nice things about being a customer that actually had his car worked on by Nismo is, you get your choice of these stickers, either in silver or black. I chose silver, because if I EVER put any one of them on, it would be on the darkened side or rear window. And no I don't like the top two either (apparently customers put them on the front fenders, one to each side...)

For future reference, Nismo's resident R33 GT-R guru is Morita-san (he built Nismo's Clubman Race Spec R33 GT-R - FYI the Speedhunters label of the R33 as only "Grand Touring" is NOT accurate...this is because in 2018 the 33 was upgraded to CRS spec), who then arrived to escort me back into the service bay to check out my car.  I'm thinking of sitting down with him at some future date and conducting an interview with him - ask him all sorts of R33 related questions, not just from me but from you readers as well as the members of ClubR33.

Remember in an earlier post, I complained about those gorgeous NISMO dry carbon fiber brake air deflectors? I guess they heard me complaining, because they put these on, essentially saving me about $2000. And guess what, OEM durability so I won't have to worry about them breaking either!

So as I was doing a final review of the underside, I was told that, in the past Nismo's paint on their braces and links had been a weak link. Recently they have improved the process and now powder coat, not paint, their underfloor braces and links.

There were also numerous pink ink markings on the underside. Takasu-san wants me to come back in a few months and they will make sure, by looking at these markings, that everything is still tight and up to spec.
Of course, other than the stickers mentioned above, THIS is what I was really excited about. The rare official NISMO plate... 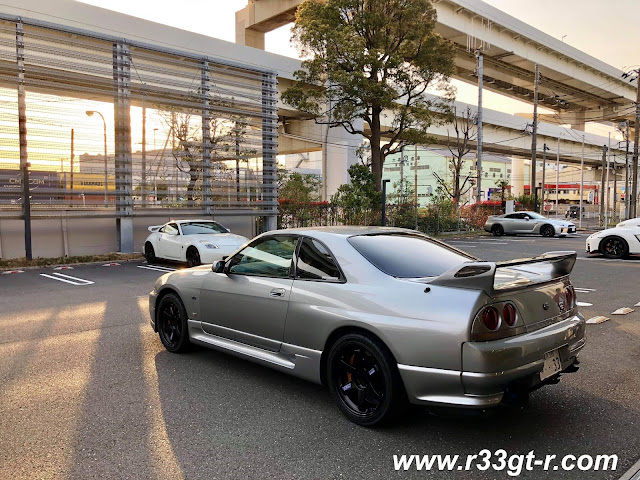 The moment of truth as I get into my car... (thanks Ale for the photo) 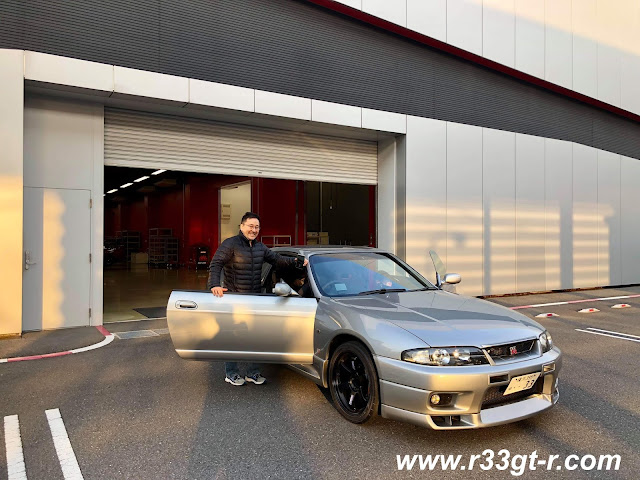 As mentioned earlier, I wanted to keep all my old parts, maybe to sell, maybe for a future project - and it turns out they stuck them in several boxes, more than what could fit in the trunk of my car, so naturally I convinced Ale to put them in his Z, and he then followed me home. He DOES take some nice pictures, don't you think?
So I got stuck at this toll booth for a good 3 minutes... because the ETC reader that WORX Auto installed had failed...sign... Some components of the headunit it's connected to work, because it still gave off that annoying beep at random intervals that I could never figure out how to turn off. The head unit itself now refuses to turn on as well.

Anyway, in tomorrow's post I'll show you how the car looks in my new garage and also talk a bit about how the car now feels - in a word "OEM" but let me explain how that is a very good thing...
Posted by Aki at 12:01 AM