Epoxy floor coatings for personal garages aren't a popular thing in Japan, so it took me a while to find the right company. Luckily, Google WAS able to find a specialist that seemed to be exactly what I wanted, Hikari Coating.

First, Nagai-san, the owner of the business, came over in early February, right after the repairs to flatten the floor were made, and we discussed exactly what I wanted. He also provided an estimate and I was pleasantly surprised at how reasonable it was.  So I immediately made a reservation to get the work done in early March.

Even though the weather wasn't cooperating, Nagai-san and his crew from Hikari showed up as promised on Sunday morning to begin preparing the floor of the garage for the epoxy coating. 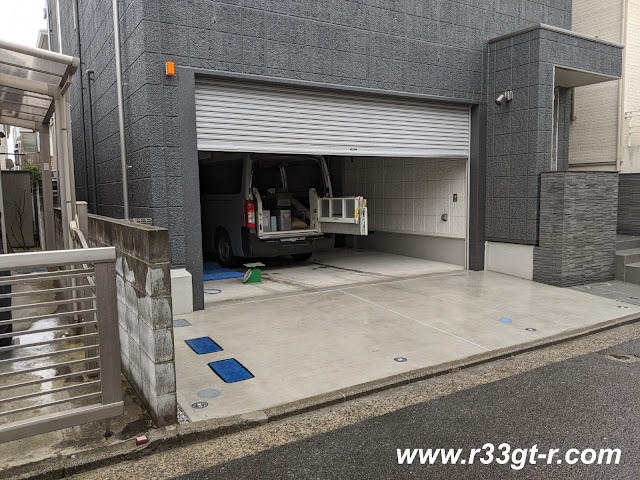 After some discussion, I had elected to go with a high gloss white epoxy coating for the garage floor, and a grey anti-slip coating for the parking spot/driveway outside the shutter door.  Nagai-san had actually recommended I go with a light grey for the inside because, as he put it, white has a tendency to show dirt very easily and in some circumstances can yellow if exposed to too much sunlight. However, I decided to go ahead and stick with the original plan of gloss white - I'll just keep the garage door closed as much as possible!

The first step was to prepare the cement floor. In order to prevent future peeling, the crew ended up removing the foam cushioning that the house manufacturer had installed between the flat concrete floor slates and the walls of the garage, replacing the foam with an elastic putty like material.
That was all they had time for the first day.

The second day, a single guy showed up - but he went ahead and prepared the floor of the garage by way of some polishing and then application of primer. 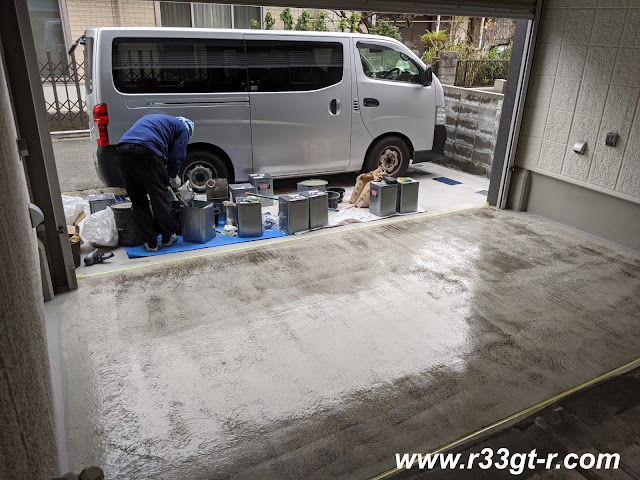 This primer dried pretty quickly, and before he left, he had gone ahead and spread out the middle coat of white epoxy.

He had also gone ahead and prepped a few cm that extended past where the shutter door came down on the ground.
The next day was rainy as well but out of the elements the inside floor dried very well, except I (being OCD) of course noticed some slight grey areas peeking through the epoxy.

Concerned, I emailed Nagai-san who told me don't worry, he wasn't done yet and and when the top coat would be applied the next day, it wouldn't be visible.

And indeed the next day was very sunny, and even though I had to be at work I watched via my security cameras as the crew finished up the inside of the garage by application of the top coat, which then extended past the floors and up 45 cm to the bottom of the cement walls.
At the same time, the crew was cleaning, then laying primer on the outside parking spot/driveway.  By the time I checked the cameras at 5pm, they were done with applying a grey epoxy coat, and by the next morning it looked like this.
On the third day of work, the workers added the grey top coat and added some sand, to make for an anti-slip surface. They also touched up the interior where some dust/bugs had inevitably ended up in the paint. Then left it to all dry overnight.
Unfortunately, overnight some a-hole had decided to purposely step into the wet paint. His foot prints extended from the middle of the driveway all the way to in front of the front stairs to the house.

But when the worker showed up, he reassured me that he could remove it, and further was going to add a quick drying clear anti-fade top coat.
And the end result?
Wow! I have to say it turned out better than I had expected.
This being Japan, it looks good not just from a distance, but also up close. It's the details that make all the difference...
In conclusion, it looks great! I am very happy. However, my next challenge is to keep the floor as white and clean as long as possible. I will have to get creative - even though I don't plan to keep the shutters open on a frequent basis, if Nagai-san is correct about yellowing from exposure to the sun, then I need to lay some protective carpeting or tiles or something in areas where the sun hits the most.

But now that it's dry - it also means I can finally start moving things into the garage from storage areas throughout the house, and can start planning on garage fixtures such as cabinets and tool chests.  But first, maybe I should go pick up my GT-R and see how it looks in the new garage...
Posted by Aki at 12:17 AM