So I got a call last evening (Friday) from Takasu-san from NISMO Omori Factory. It seems that the used G&Yu NeXT battery that Nakamura at Worx Autoalarm had installed without my permission (and thrown out my trusted Optima Yellow Top - he claimed they were well marketed but not a good battery!) had reached a point where it could not hold a charge. And in fact, attempting to charge it (whether when the car was running or by charger) resulted in a weird chemical burning smell... not good...
So I did some research and I think G&Yu (formerly Yuasa) had stopped making this model about 2-3 generations ago. It does appear on Rakuten and Amazon but doesn't look like you can order it anymore.  In any case, looks like it has a capacity of 68Ah (higher than the Yellow Top, as below) but I couldn't find any CCA rating.  Also, I am sure there is a technical reason why this one is no longer made but the Yellow Top still is... and of course being a USED battery, who knows what state the NeXT battery was too when it was installed in my car.

Who da F installs a USED battery in a customer's car??

So, I'll have to buy a new Optima Yellow Top, as I think they are the best out there... Good news is that NISMO agrees and recommends the Optima Yellow Top, so I promptly went online and bought one (model number YT925S-L/YR R 3.7?) from the online dealer I had dealt with before (in order to avoid the NISMO tax, of course...) and had them send the battery directly to NISMO for me.

Also Takasu-san informed me -  good news - my car is almost done, for real!

The next day (today) being Saturday I decided to drop into NISMO in the afternoon. Yes, NISMO Omori Factory is currently closed to the public due to the coronavirus scare (from March 4 to March 18) but hey this is where being a senior Nissan employee has its advantages... 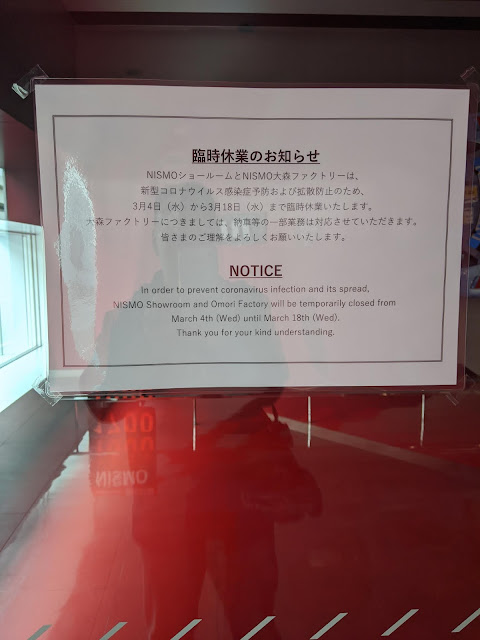 So as I have written previously, the initial goal of having the car serviced at Nismo Omori Factory was to verify the extent, and then as needed, undo the damage incurred when the car sat outside the Worx Autoalarm garage, exposed to ocean winds, which I suspect then led to rust on parts of the car's undercarriage.

I did take care of the rust that had savagely appeared on the rotors, as I wrote in this post. 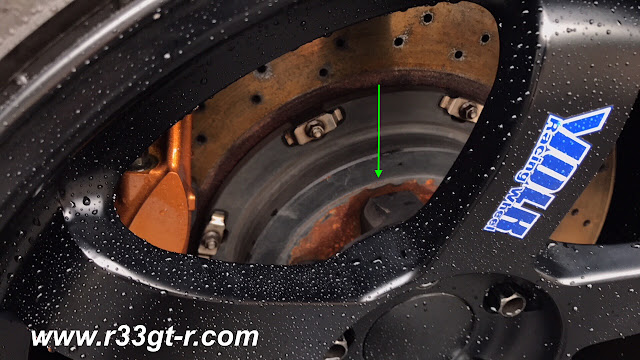 And for those suspension parts and links that developed rust, as I wrote recently I simply had those parts removed and replaced. 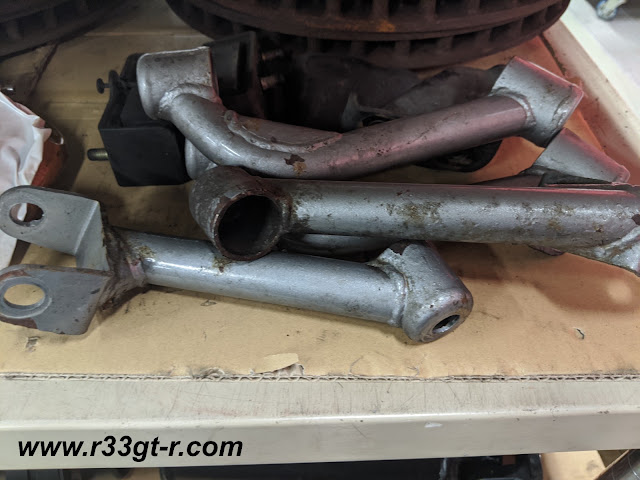 Then there are some places on the body that simply had to be repaired at a body shop.
For example, here is how their body shop fixed up the sills (the jack up points, having been scratched up in use, had developed some minor rust even before the Worx episode but the amount of rust seemed to increase tenfold afterwards).  My sills weren't bent up like many I've seen, but the outside flanges seemed to be more skewed to the outside than they should be. So now no rust and straight sills! 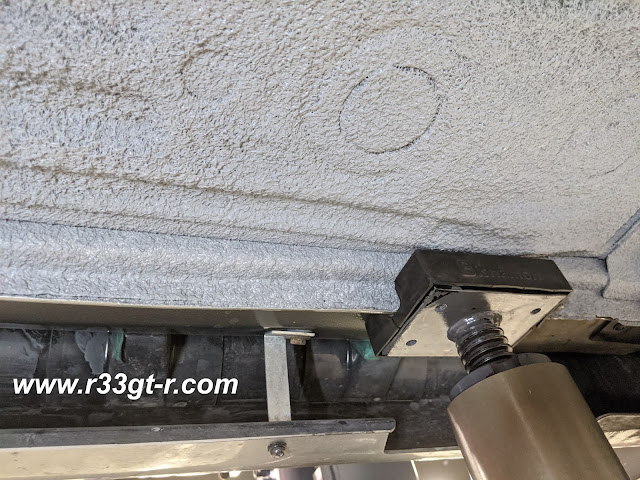 So while I left the fixing up and re-protection of the bottom of the car to the pros, if all the rusted parts had to come off anyway, what other parts could come off due to age, not functioning and wear and tear?

Funny you should ask...
So, some parts were a simple replacement of the various Nismo parts I had installed long ago. Other parts were OEM parts that had not been changed out since the car left the factory, such as the rear member suspension brace!

Basically - I had the NISMO Omori Factory's Chassis Refresh done - plus a few cool extras.  In my next posts, I will show photos of all the new parts on the car, so you can see the difference, as well as the extras!
Posted by Aki at 12:50 AM

Inspirational and educational posts as always Aki. Coincidentally I just happened to be checking out your blog few hours ago, left the blog opened in a tab and when it refreshed, it was greeted by this new post here. Couldn't be happier to read something new from you.

Thanks for always reading my blog, Ken!

It's bizarre to me that AHr ratings matter at all for lead acid based batteries. You cannot use the AHr rating more than a few times before the battery is completely dead. You just need enough reserve capacity for something like listening to the radio for an hour to not kill your battery from deep discharge. The alternator should be providing all of the power the car needs normally otherwise.

I have heard that the yellowtop batteries aren't as good these days but that may be primarily a US problem. Mostly manifests as batteries dying in less than 3 years.

At this point in my life I've realized if anyone says stuff like that it's a major red flag. I've hung up on tuners that tell me that the RB26 does best/great with speed density ITB mode, that ID1050x is their recommended injector, AEM 320 lph fuel pump works great for them, etc.... the internet has a lot of good info out there these days if people care to look.

Anon - thanks for your comments- totally agree on the AHr rating! I am debating a next step to upgrade the OEM alternator into a higher capacity one.

Yeah I've seen that too on the hit and miss nature of the Optima batteries. The guy here in Japan is offering a 3 year, unlimited mile warranty so hopefully nothing bad happens. As a tuner, I have to say that for most things Nismo is super conservative (i.e. like an OEM), so for some things I will just have to go somewhere else.

I think the best way to figure out whether you need a bigger alternator is to track battery terminal voltage when driving. If you see it drop below ~12.8 volts even after driving 5-10 minutes you may need more amps. A bigger alternator is going to have more parasitic drag so it's best to avoid oversizing your alternator. Also keep in mind that you may need to upsize your wiring to handle the extra amps that the alternator puts out.

Hi Aki!
What kind of undercoating do they use, the grey one? I think it's the same one I have on our recently garage member T32 X-Trail. Might wanna use that on the BNR34 and 32 garage queens.

Anon #1 - good points, appreciate the advice! Will give it a shot.

Should definitely look into a higher output alternator, Avance make good ones. My car had a Q45/President one installed in Japan. Also seems to work well.

Yes I know who you are! Thanks for reading the blog!

I actually almost installed the black one from Advance, but my mechanic told me that he had seen troubles due to incomplete grounding due to the black paint. I will continue to check out the options...

I have been reading your blog for some time now and was wondering where I could get the R33 GTR compatible mounting kit from overseas? I'm planning to also get myself an optima yellow top 3.7 so it would require such a mounting kit.

Thank you for reading my blog! Well unfortunately I don't know of any place other than the online store ( https://www.soundwavemeiwa.com/SHOP/OPK0001.html) where I got my Optima... are you sure you can't find something similar locally?

Unfortunately not as i checked with several stores but though luck.

Thanks for the offer, that's kind of you.

I had an order going at nengun and asked if they could add it to my order, which they did so that's great.

However, it looks like it's for the Optima Red version. Is that compatible with the Yellow top?

They used the same link as you posted where it's also described as Red top:

Am I missing something or is this just all the same?

Thanks for the feedback!