In the course of getting ready for last Sunday's GT-R50 Japan invite, here are two more items of note - one which I cannot fix, the other which I managed to make look better until I'm able to replace with new.

First, I was horrified to find out that, without asking me, the IDIOT had drilled into the frame of my car!  As well as drilling a hole into my trusty carbon fiber Garage Defend GT Cooling Panel that I had installed over 10 years ago! 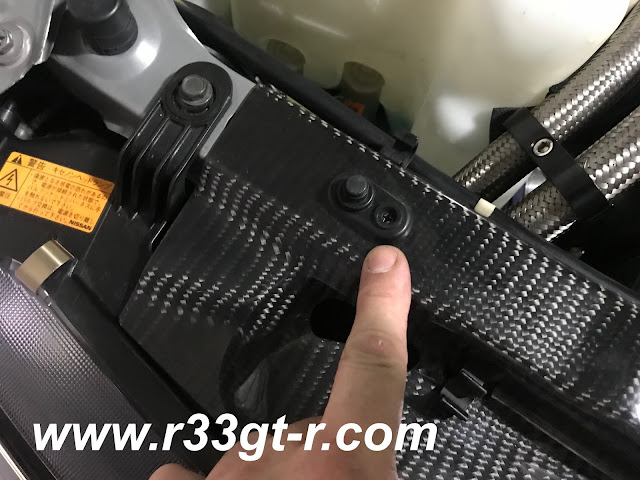 I simply don't know why he couldn't have used an existing hole elsewhere to install the hood/bonnet switch for the alarm.  Or used the location where the previous shop had installed the switch, hidden away towards the rear.  Maybe I will have to relocate itself myself later, as the wiring for the switch is easily accessible. Easy for any competent thief to quickly find and cut. UNBELIEVABLE. COMPLETE INCOMPETENCE.

Well, this gives me an excuse to buy a new Cooling Panel...more money needlessly wasted...not sure what to do with the hole in the car though.

Second, after picking up my car I had noticed that the rear rotors seemed to have more rust on them than usual.  After washing my car, sure some rust always quickly appears on the rotors, but they come off after a quick spin.  This was different. The rust was on the rotor hat, not the rotors themselves. The fronts don't have this problem, as the hats appear to be alloy and not painted steel.
Yeah it looks bad and I suspect it's because WORX is located right near the Pacific Ocean, subjected to those ocean winds. So obviously despite Nakamura telling me my car would be well looked after, it's clear that it was left out in the open for the 6 months it was there. Perhaps a weekly wash or a cover would have prevented this, but obviously that wasn't happening...
The good news is that when I pointed this out to the guys at Nissan Prince Tokyo Motorsports Factory, they reassured me that it's only surface rust. Ok, but it still looks HORRIBLE... I tried to live with it as the rotors are getting worn anyway and so I was thinking of replacing the whole set anyway, but until then... yeah I just couldn't bear to see it each time I drove or worked on my car. Also, having been told my car would be displayed at the Nissan section at the GTR50 event, I knew I had to do something quick (and I had no time to change out the rotors or hats).

So, a few weekends ago in September when it wasn't raining here in Japan I jacked up the back of the car and got to work.
Once I got rid of as much rust as I could, I had two choices. Leave as is or paint with some kind of anti-rust coating.

I tried some anti-rust gel, but that would wear off and then the rust might start up again. Plus, you could still see it.  Luckily I still had some Rust-O-Leum paint left over from a project I did and featured here as well as on Speedhunters.


I admit, because I will need to replace it anyway I didn't bother taping newspaper and doing the spray painting properly. Hence the overspray.

Anyway, I hope this is the last of the surprises from WORX, but I suspect it's not.  Apologies to my readers, I don't mean to beat a dead horse but... my God this guy is bad.

So, I might as well ask - what rotors should I get? To keep costs low I think I want to stick with OEM rotor hats so whatever works with those. Can anyone introduce me to a place that can offer the rotors such as AP Racing or Alcon without a huge markup?
Posted by Aki at 12:30 AM

I've seen sets of pads + rotors for 380mm all around going for 1250 USD. Might be worth a shot, especially if you're doing mostly street driving and you haven't managed to crack the stock drilled rotors.

I feel your pain with regards to the hood switch. I spent a fair but of time looking for a suitable position on my 32 in order to avoid exactly the issue here (one of drilling a carbon panel) and also avoiding drilling any extra holes in the body. On the 32 at least there are indeed suitable holes for this switch to be located in from factory. I would be surprised if the same wasn’t true on a 33.

Anonymous, thanks! Good recommendation, except that I like to have the best possible, if not insane.

Matt, that's exactly what pricing for the carbon ceramic rotors are - insane!! LOL.

Christian - exactly right - and this is a guy who's supposed to be a PRO? Not a chance. (I scraped off his shop sticker he put on my car, got it on video, will have to share someday lol)I will say he's good at clean wiring but that's about it. There are plenty of suitable holes on my car for this kind of switch, including where the previous alarm shop had installed a similar switch.

In my experience there is not a lot of differentiation between cast iron rotors. If you really want something notably better you would have to do something like ferritic nitrocarburizing your brake rotors. GM does this with a lot of their newer cars to reduce brake dust and eliminate any chance of rust on the rotors. It will also greatly increase the lifespan as the pads need to first wear through a very hard surface treatment before getting to the base iron.

If you’re interested in experimenting with brake rotors you could try the dba 5000 rotors FNC treated. If those work out you could step up to Alcon or AP Racing rotors with the same treatment.

Good reason I like the Project Mu 2 piece rotors, the hats are not steel, some sort of alloy that does not rust, perhaps alumi.

That idiot should have put the switch by the hinge or inside panel somewhere, far away from the eye.

Motec has some super high end computers with functions to monitor laser eye sensors, derived from LMP racing for suspension tuning. That would be pretty cool to have on street car :) in your case to work with the alarm haha

Hmm. FNC sounds interesting. Will look into who can provide that service locally, if that is even possible.

Did not know that about Project Mu. Makes sense though now thanks to Matt I'm trying to figure out if I could Crowdfund a rotor buy...lol

I know in the US you can get small batches of iron/steel parts FNCed but I don't really know much about Japan.