So last night I was finally replacing a few interior pieces (as I will post in a future blog post soon), when by happenstance I realized that my rear brake lamps were not working.

Of course, I checked the obvious, which was the fuse and the bulbs, and both were ok, but since the trunk mounted LED also failed to light up, I figured it was something a bit more complicated - either the switch under the brake pedal or the relay.

So this morning I called up Yamazaki-san at Nissan Prince Tokyo Motorsports Factory, and told him I would be driving in later in the day to drop the car off for this problem. Except, it then started to rain. And by the time I left work (early) not only was it raining heavily but the skies were darkening quickly.  All of sudden, driving around with no brake lights - even only 20km from home to NPTMF, seemed like a risky thing to do.

As I was taking the train home, I called my insurance company to ask for a tow truck, and the operator who verified my policy promised I would be receiving a phone call 15 minutes after I got home, from the nearest tow truck operator.

Now, with today being a very heavy rain day (and so lots of accidents out there), I was not expecting the call so soon but... yep, this is SO Japan. Exactly 15 minutes after I got home... the truck driver told me to meet him down the street from my house, because the road in front of my house is only 4 meters wide and he didn't want to block traffic!

As I drove down the street towards his direction, I saw him waving me down - he had parked the truck a bit further up the street and decided to meet me closer to my house... on foot! In the rain! Despite me offering him a ride to his truck, he declined and proceeded to run alongside me in the rain towards his truck!
I was pleasantly surprised to find that they had sent over a proper flat bed truck. Now I realized why my insurance company had asked me if the car had been lowered (yes), and whether I had any aftermarket aero parts on the car (no).
Even though the truck was a flat bed, the driver said the car was low enough that the front lip spoiler might get scraped. Standing in the rain, getting wet, I told him "not a problem" while trying to remember in the back of my mind whether the rubber bump stops I had installed for protection were still good.

I guess my poker face is terrible because the next thing I knew, the driver had pulled out these two wooden planks and...
He told me that in cases of lowered cars, in his judgment better safe than sorry no matter what the owner says, so he called the insurance company to make sure they agreed with his course of action on the wooden planks.

Once he got the OK, he directed me while I drove it up onto the bed, no damage to the front lip.  Then he pushed a few buttons and...

Once on, he then secured the car not only with blocks like below, but also used nylon belts to tie down the front wheels as well (not shown in below photo). 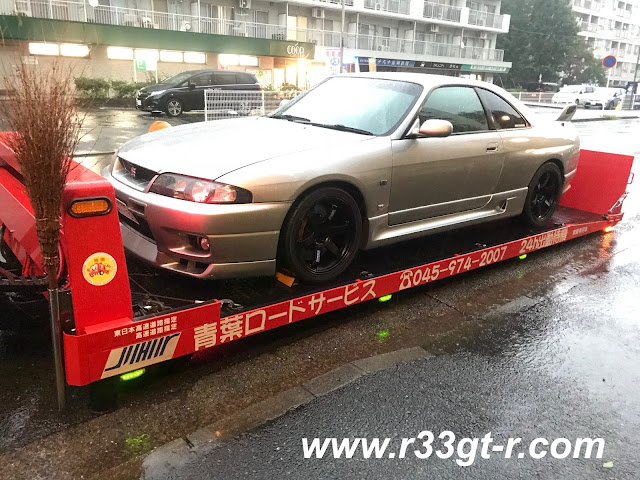 We then proceeded to drive to NPTMF.  45 minutes later, once lowered to the ground I drove it off the truck backwards, and then Yamazaki-san took over. 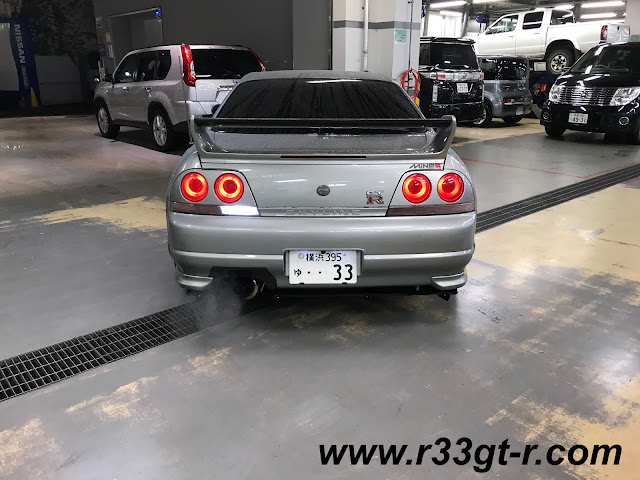 Yamada-san, who I have entrusted this car to since I first bought it back in 2006, immediately set to work trying to figure out what was wrong with the brake lights.
Yamada-san first checked the switch behind the brake pedal... 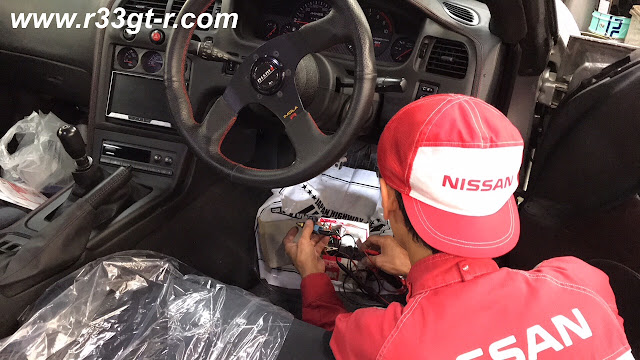 And also checked the wiring back where the bulbs were. 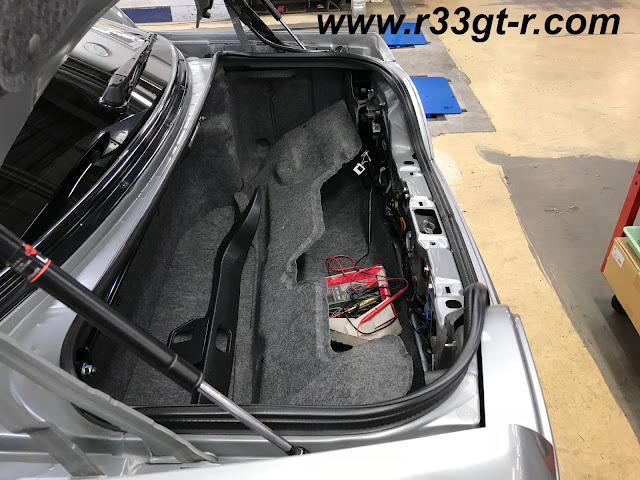 After about 30 minutes, he concluded that the brake lamp switch was at fault. It was operating intermittently, as he had actually gotten it to work again, but of course recommended a new switch, which I promptly ordered.

As the car is going to be there overnight I've asked them to inspect the car for any salt or other damage due to the six months my car was at WORX (as WORX is right next to the Pacific Ocean in Chiba).  In an upcoming post I'll show why I know it was left out in the open, exposed to the salt wind, and how I dealt with another aspect of that in my garage last weekend...
Posted by Aki at 11:28 PM

Do you have by any chance the reference of the concerned switch.
Should be usefull if we encounter the same trouble one day ^^.

Besides that still amazed by the service in Japan...
Not sure that towing service will be as good in Europe :s.

Not much of an electrical gremlin all things considered. I've heard some real nightmare stories for British cars...

Had few of those brake switches go. Oddly just before it happens you normally see chunks of plastic on the floor mat, driver side of course. This stopper disintegrates over time, plastic after all. There is simple fix, running bolt with spacer to contact the switch but note you dont want bolt head touching the switch, fear of grounding out so put some tape over it. And of course the proper way is exchanging the 20$ switch :)

Great work by the tow truck guy, love it when people care!

Thank you so much for this part number. I have tried and looked at everything i could to figure out why my running lights work buy brakes don't come on. Pretty confident this will finally fix it as everything else looks good. Its just so difficult to find much good information as we never had these cars here in the US. It has been a pain to find what works on this car. Thanks again!