Still Working On the Interior...

First, apologies to all you readers - especially those who inquired to see if I was still alive. Good news, yes I am, bad news I have been so busy with my awesome new job I started in May of last year that this blog has suffered. Of course, I think I still have to some PTSD from the whole fiasco at WORX last year (to make it perfect again I am saving up)...

Anyway, so truth be told, both the LED back up lamp replacement and the muffler silencer parts I discussed in my last two posts, I took care of shortly after rescuing my car from WORX Auto Alarm in October of last year.  As you've seen, in my very limited free time (lately I've been busy with family stuff on the weekends too, never mind my crazy work schedule) I've been working on fixing all the items that Nakamura at WORX essentially either broke, ignored my requests on, or threw out.

One item that was not finished was the installation of the matte carbon fiber door cups that Marc Binet from Xclusiv Carbon had made for me.
It was obvious that when I went to pick the car up (after 6 months) that Nakamura was rushing to finish, barely putting the finishing touches on the Navi unit, and so items such as these cups as well as the leatherized ignition key surround, he simply did not have time for. He did manage to wrap up the red LED that I had installed as a courtesy lamp a long time ago, which actually now prevents placement of the LED in the space I had drilled out for the LED. Again, an example of linear thinking and not the creative thinking that is needed for these kinds of mods.  Anyway, in a future post I will show you how I got around this...

In any case, not installing the door cups turned out to be a blessing of sorts, as I began thinking about replacing the door handles themselves with chrome versions that were available for the R33 sedan. I had seen these on Yahoo Auction so many times, yet never pulled the trigger, and now it was too late, as no one now seems to be selling them new any more.

Maybe someday Nissan will make them again, or a used set in very good condition pops up. Until then, I had to figure out way to bring some "pop" to this area of the car.

Enter my friend and fellow R33 GT-R owner Tom S. He has an AMAZING black R33 GT-R:
When I mentioned that I was looking for the chrome door handles, he first tried to find them in the UK for me, but when that didn't work out, came up with a better idea - he has a friend, James B. who could paint a set in a nice color. Oh, and James paints for Aston Martin(!) and LandRover(!!) (prototype work) and could be convinced to help(!!!!)?

But first I had to tell Tom what color I wanted. Naturally, we have to use OEM paint colors, so I went over to the Nissan Global Headquarters gallery to check out not only the cars on display but to see what OEM colors are currently being sold.

After I told Tom about the color choice, he had James paint the used handles - as the following photos show. 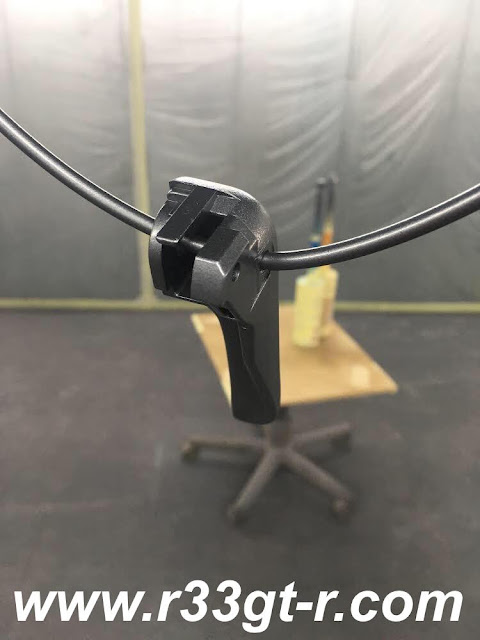 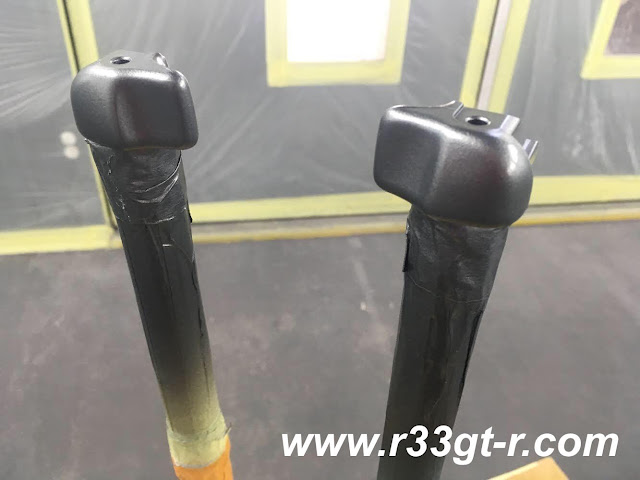 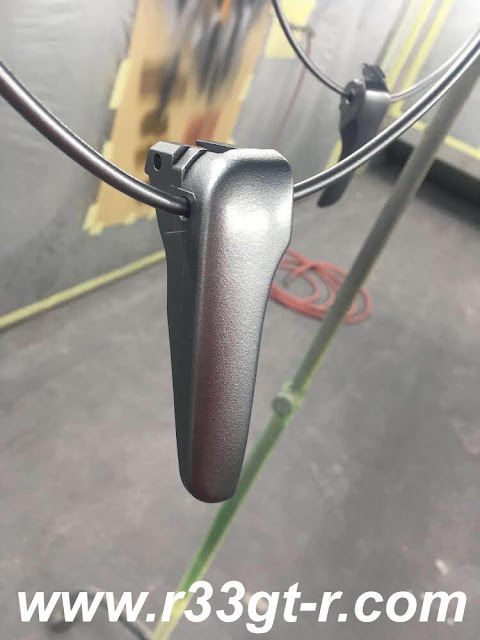 Tom then sent me a photo showing the finished result. Looks fantastic, but until I see them with my own naked eyes... 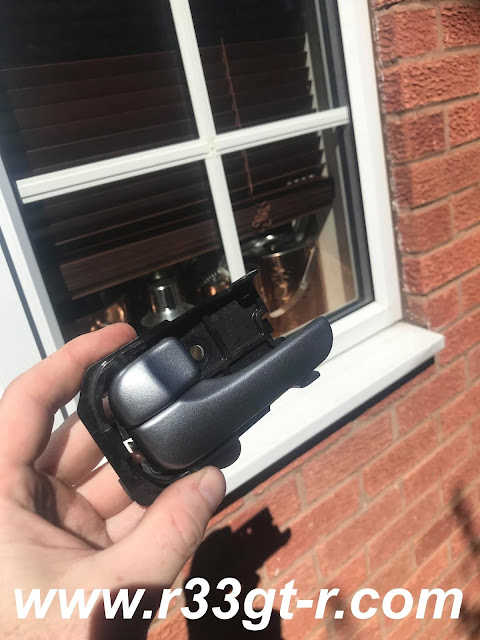 Actually, now that I have my oem handles removed from the car, I have another idea... but meanwhile my next blog post will be a repair of another kind... this one unbelievable not the fault of WORX...

Big thanks to Tom and James for your help on making my car that much better!!
Posted by Aki at 1:09 AM

Good posts as always. A bit off topic here. Would you know by any reason as to why the MINES TITANIUM SILENCE-VX PRO TITAN III EXHAUST been discontinued for the R33?

Fuzzy - thanks, and happy to answer your question. When I asked a few years ago, they told me "not enough demand" - in other words I guess most 33 owners are cheap like me? Maybe once rich Americans buy them and start demanding parts from Mine's, we will see these kinds of 33 parts come back...?

Thanks for the quick reply Aki. That makes sense. Keep up the good work!