So while I have a couple of car mod posts coming up soon, I first wanted to post up some information I found recently on a fellow R33 GT-R owner's Facebook page.

Miyuki Eguchi is a proud owner of a very red R33 GT-R - in fact she was just featured in this month's GT-R Magazine (apologies for the crooked scan): 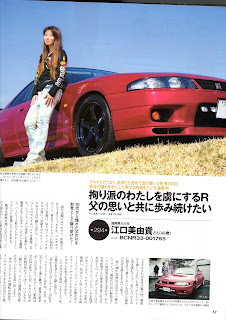 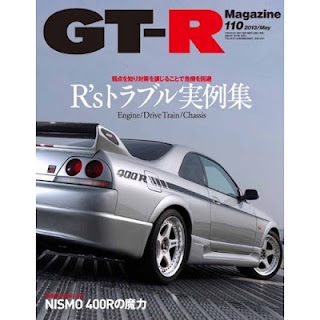 Anyway, we had become acquainted (I've never met her in person) when she "liked" the R33 GT-R Facebook page, shortly after it was launched (if you are reading this and haven't "liked" the page, please do so, thanks!).

Recently, on one of her Facebook posts, Miyuki-san posted this:
At first, I thought she was posting to show everyone the little rubber GT-R Magazine insert in the area in front of the console box. But then I noticed the weird switch between the coin holder and the "GT-R" badge.  Turns out, this is the switch for the optional quad foglights for the R33 GT-R that Nissan offered (you can see what the foglights look like in the scan of Miyuki-san's car above).  Apparently, the foglights were a very high cost option at the time, hence it is unusual to see a GT-R with those lights, let alone this switch!  And as she explained to me, the "I" position is for the "near" setting, and the "II" position is for the "far-away" setting.  She also informed me that, these "micro twin fog lamps" were actually not that bright, and were apparently also available on the Silvia at that time, albeit with a different bracket.

In any case - hmmmmm - interesting. When was the last time you actually used the coin holder(s)? I wonder what kind of switches I could put there for my car? What switches could I fit there? Ejection seats? Missile launchers? LOL

Miyuki-san also had another goody to show us. The Nissan Puretron (pronounced "Pur-a-tron" in Japanese for some reason). Here is how it looks, installed, on the rear parcel shelf:
Miyuki-san reports that it still works after 17 years (same age as the car) without issue, and in fact, replacement filters are still available as well! It was designed to remove cigarette smoke, as well as pollen, but of course it doesn't have the "PlasmaCluster" type ozone/ionizing function that the newer ones have.

So how does it work? By way of a remote control, which Miyuki-san says she never uses (which means I guess she just leaves the Puretron on all the time, then?).
The remote is clipped to the sun visor (and left there permanently, Miyuki-san says, otherwise she'd lose it!) and requires 2 triple A batteries to operate.  Perhaps this unit would be nice to have during hay fever season, which seems to be getting worse every year here in Japan, but installing the Puretron requires the rear shelf to be cut open for the unit.

Plus, I wonder if there is a way to install a new "PlasmaCluster" type air cleaner without taking up too much space? Surely there has to be something out there that can be hidden (not like the current ones which sit in your cup holders).

Anyway - checking out other people's R33s always gives me ideas, so since I stumbled across these two tidbits, decided to share. Hope it was interesting and/or useful information!

Many thanks to Miyuki-san for letting me post this!
Posted by Aki at 1:26 AM

I`ve bought such a Puretron second hand incl. remote. My R33 has no loom to connect it to the car so I was trying to order it from Nissan...same for the Filter element inside which still is an old dusty thing. My supplier told me that he cant get either of it.

Could you ask your Nissan dealer if these these parts are still to have? Here in Europe it`s so far not possible...

I love all possible option parts that where used then...don`t wanna ditch it :-/