Last weekend - as well as Monday and Tuesday nights after work - I found myself in the garage installing automotive grade sound deadening materials to the floor of my car. Impending middle age guy now seeking a quiet ride? Well, actually - this is the first step in another project of mine - improving the audio system in the car, as inspired by my friend Alex who has also been giving me guidance along the way. (note - and another outlet for my OCD... these car audio guys are INTENSE! See for example http://diymobileaudio.com/ )

Anyway, as any true car audiophile will tell you, the first step is to prepare the vehicle so that the music can be heard, and felt, as accurately as possible. Hence the need to lay deadening material - the RAAMmat BXTII (the silver stuff you see in the photos) and Ensolite (the closed cell foam). I chose these products from RAAMaudio (http://www.raamaudio.com/) because of its reputation on the car audio forums, the quality of the product, ease of installation, and the pricing. Oh, and when I first contacted the owner of RAAMaudio - he turned out to be an avid motorhead (Corvette owners) who did alot of racing, and he knew exactly what I was talking about when I said that I wanted material that would reduce heat, the vibrations and road noise, but NOT add too much weight. (Thanks Rick for all of your advice...so far!)

So the first step COULD have been to apply the material to the doors, but I'm still researching what kind and brand of speakers to install. One problem unique to R33s apparently is that the door mounted 6.5 inch speakers only allow for an installation depth of 57mm... which is NOT alot of space at all (the R32 uses a weird 4X6 speaker up front, the R34 uses the same 6.5 but without the mounting depth issue, apparently).

Hence I decided to lay out the RAAMmat and Ensolite on the floor of the car. The RAAMmat works by dampening vibration, while the Ensolite blocks out sounds (although some people will claim that the Ensolite layer is actually just a substrate on top of which you can apply a real sound blocker... whatever... maybe but again my goal was maximum results with least weight gain).

So, I first started by attempting to remove the carpet. The plastic "SKYLINE" Side scuff plates come off easily, and a few turns of the screwdriver released the dead pedal and the gas pedal stop on the driver's side. A few more turns and the center console and shift lever surround came off... and this is when I realized that if I wanted to remove the entire carpet, I was going to have to remove most of the dashboard too... OK so this is when I decided that I would simply fold the carpet over onto one side, lay the materials on the exposed floor, and the repeat for the other side. 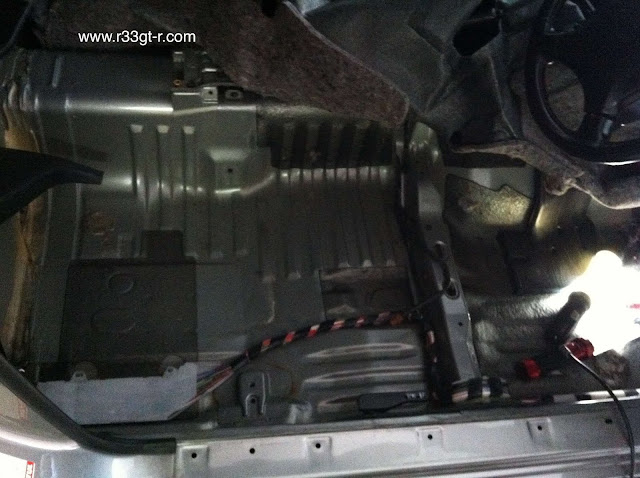 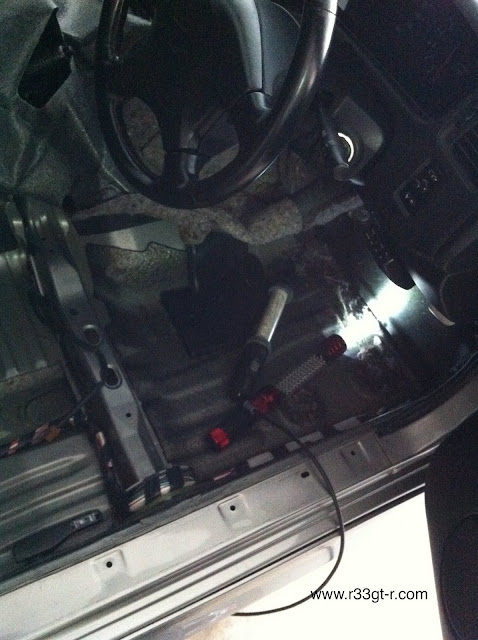 That wasn't so bad...but then I realized how DIRTY it was underneath the carpet. You are supposed to apply this material to CLEAN surfaces only. So after vacuuming bits of dust and dirt, I broke out the Simple Green and brake cleaner, and used a rag to wipe down as best I could. Check out how FILTHY the floor was!!!

Where did this grime come from? 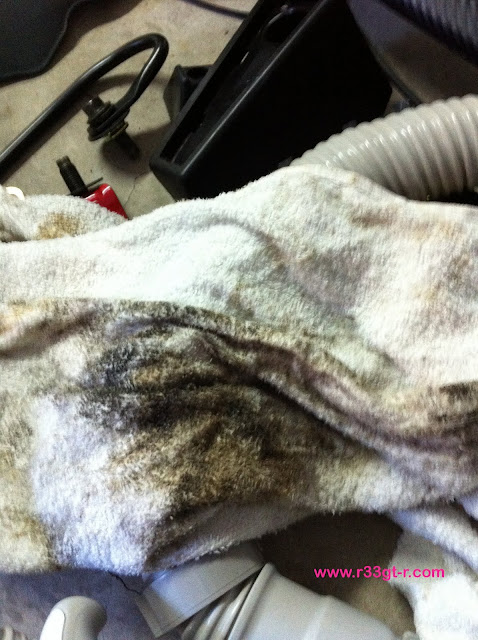 Anyway, once clean it was pretty simple. The RAAMmat has adhesive qualities on the butyl side (the non-aluminum side) so it's just a matter of cutting the pieces to fit the area they are covering, peeling away the sticker, and then applying.

Rick had advised me to use the "knock" test to find out which panels had the most vibration. You apply the panels to such vibrating areas and the panels would in theory reduce such vibrations. Unfortunately, I detected 3 different knocks - a very solid one on the front edge of where the rear seat goes, the floor itself had SOME "tinny" sound and the sidesills sounded almost hollow (actually I think they are)! So, although Rick had advised just applying the RAAMmat to places that sounded tinny - I ended up laying the mat over the entire floor - all except for half of the area in front of the passenger seat, which, perhaps due to the factory sound proofing, was extremely solid feeling and sounding. 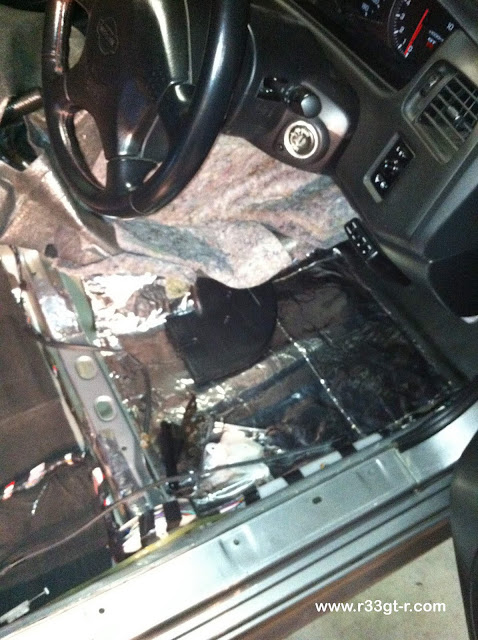 The sills I have not figured out what to do yet, because there are too many access holes and wiring going through it, but I did manage to fit a few pieces of the mat on there as well. Not just completely, it would have been difficult with all of the access holes... 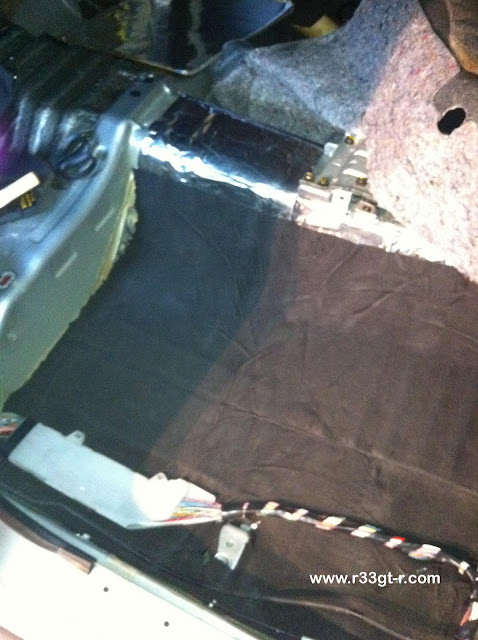 After the Ensolite was laid across essentially the entire floor of the car, I replaced the carpet, and put the front seats back in so I could drive my car on Wednesday night to have the brake upgrade installed (coming up soon on this blog!). Hence, the rest of the sound deadening will have to wait until I get the car back.

So far though I've only used maybe half of the 20 lbs of the material I bought,sot much of a weight penalty I think?

On the drive over though - the car - while still noisy as the sound comes through the firewall and the doors - DID seem a bit more solid and less harsh vibration-wise... but maybe a placebo effect? Stay tuned...
Posted by Aki at 12:12 AM

What has been the easiest sound deadener to install? I've bought some cheap ones before and they were a real pain to get into the tight spots. Do you have any suggestions for products that will fit easily or are easier to install?

Hi Roy, thanks for posting. To answer your question, honestly I do not have any experience other than the RAAMMat, and then a local Japanese brand (Audio Technica) - I assume you are asking about the deadening material, not the sound blocking Ensolite stuff? I think basically the leading companies, you can't go wrong. Although I understand that thinner is easier to install, obviously. The ultimate being some kind of spray on, which I may try for my trunk area.

There is a theory that, if there is enough mass, then you do not have to cover the whole panel, as the mass should be able to absorb vibrations. That's what the AudioTechnica stuff was like - very heavy, butyl based, but basically came in 15 cm circles that you stick to the inside of the door sheet metal. And even Rick from RAAMmat also told me the same - that full coverage wasn't needed, even using his thinner stuff.

Stay tuned as I will be damping the trunk with a spray on - not done yet with this project!