What a great CAR themed day....

First, an early morning blast on the streets of Tokyo in my car accompanied by DCD to Robson - yes, as in Robson Leather (and now to be known as Robson Maturity - as Masa, Robson's president explained - Robson is actually a mountain in Canada, and once you get to the top of a mountain, have to maintain...). Anyway I think you know Robson is known for the superior leather upholstery work they do... don't like your standard cloth seats? Go see Robson. How about gear shift and parking brake boots - the factory is some kind of cheap vinyl. Replace with real leather at Robson.

So we drive up and despite Robson's world-wide fame, it's very much a no-nonsense workspace - the factory on the ground floor, and the offices and showroom above. 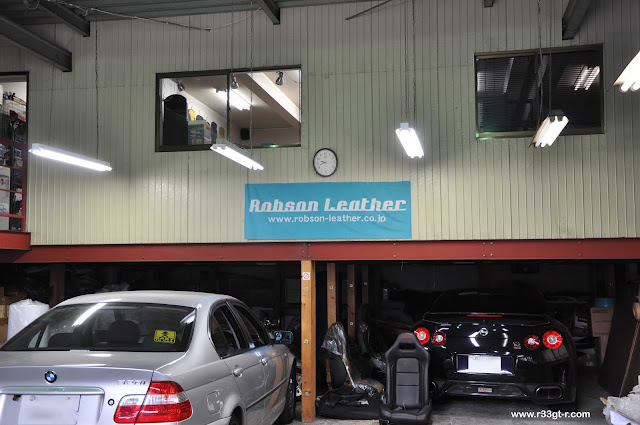 I was too busy discussing various options and plans for my car with Masa-san to take many pictures. I did however manage to grab some catalogs on the way out - here is an excerpt from their carbon fiber catalog 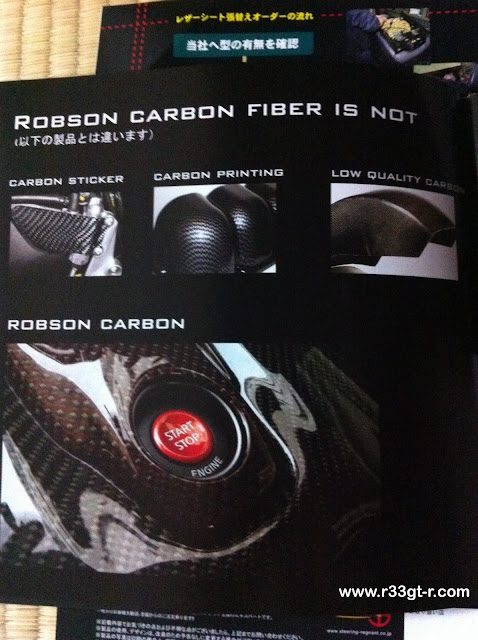 Check out how 3-D their carbon fiber is! Masa-san told me they have 17 (!) layers of gloss on top of the carbon...wow!

Anyway I don't know if anyone else has noticed, but the 3 gauge cluster in the middle of the R33's center console... is from the factory, a poorly imprinted carbon effect...but that's not what I was at Robson today for. I'll take care of my carbon needs later, but first, something else. In fact, the first step is something Robson has NEVER done before on an R33 (and they've done dozens...)

So it was with great reluctance that I was dragged out of there by Dino, but we had our next stop to make - to pick up this thing for Dino to do an article on: 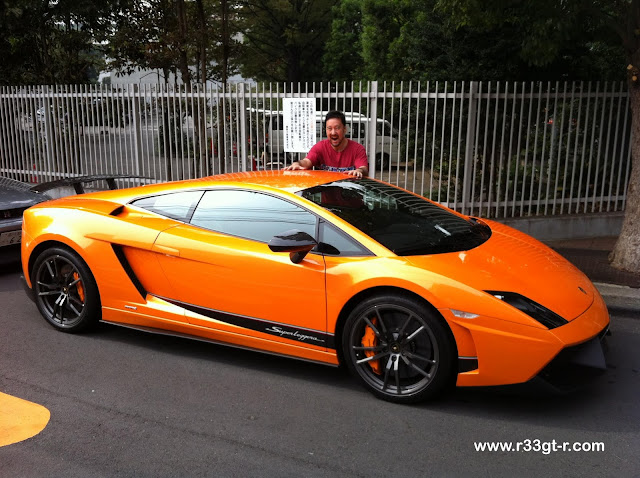 But whatever - this is a blog about R33 GT-Rs. Suffice to say that looks aren't everything, right?

Ok, ok, the Gallardo Superleggerra is fantastic. And way more exciting to drive/be in than the new R35. The best of German engineering and Italian styling, not a bad combo. Still, would like to check out a Ferrari up close one day...

Anyway, I had an errand to run at Nissan Shinagawa, so we drove both cars there. 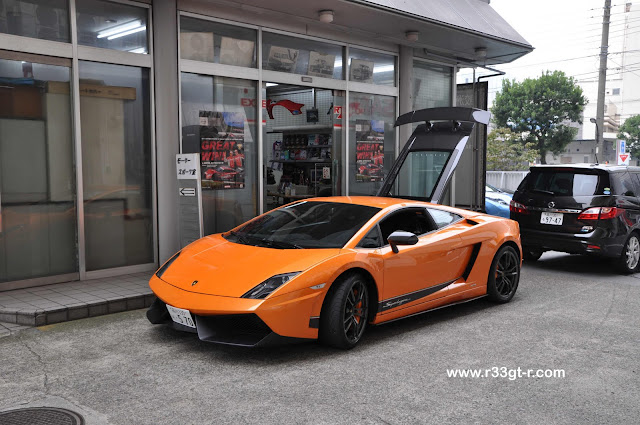 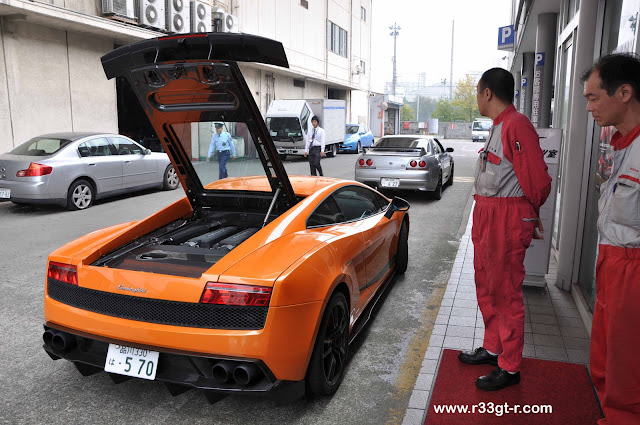 Here is the funniest scene of the day - I think we cost Nissan a few hundred dollars worth of work: 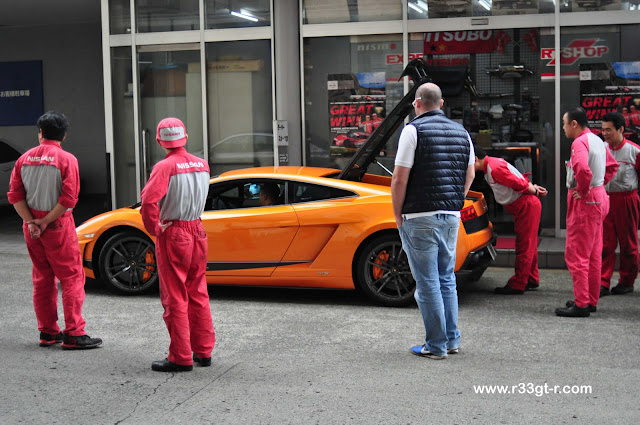 Finally they tore themselves away to get back to work.... nice to see these are all real car guys! Koyama-san was taking photos, I think this scene may make their blog, will provide a link if we do!

I had a few pieces I had ordered earlier that I was there to pick up - I finally got the Nismo B-pillar carbon pillar garnish (part number 99993-RN593), along with the Nismo carbon rear wing side caps (officially "Rear Spoiler Ornaments" - part number 99993-RN595 FYI). Lacking confidence of a smooth install, I had Sugimoto do the install there. 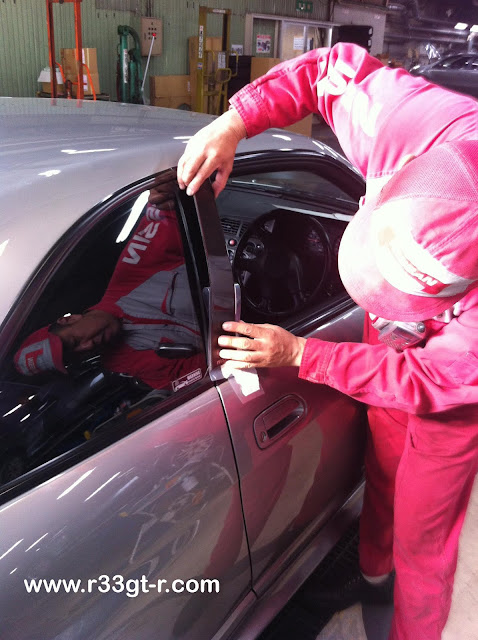 Not a good photo, but here is it how it looks now... will try to remember to take a picture during the day later. 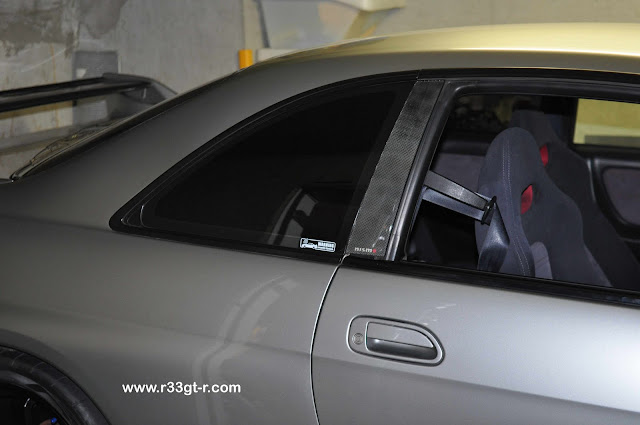 Of course, while this is subtle and the quality seems pretty good - it's NOTHING like this: 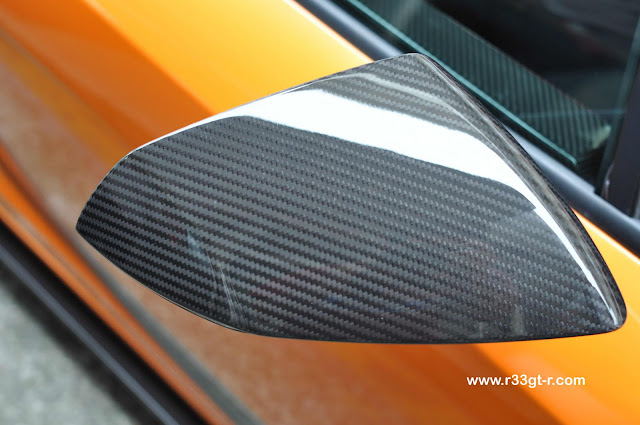 Spoiled now... Kind of wish Mine's would bring back their carbon fiber mirrors for the R33... I asked but was given a vague response (i.e. Japanese for "no")... oh well. Maybe Robson? LOL.

Anyway, I also picked up a liner for the trunk for another project I have, and then drove home. And found a box with this waiting for me: 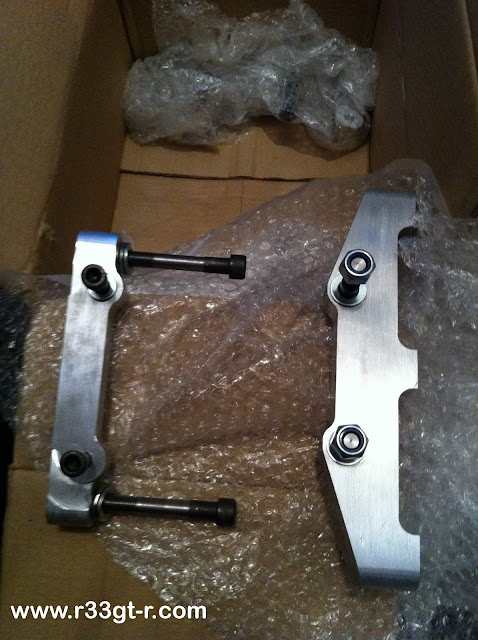 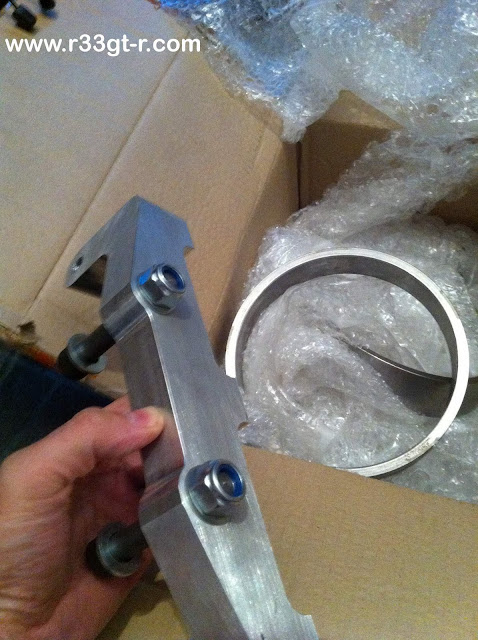 What is this? Why, they're brackets for brake calipers... so stay tuned to see what brakes I chose to install on my GT-R!
Posted by Aki at 12:32 AM