Modernizing the Stereo, Part 1 - Getting Ready and Amp Selection

So now that I've been able to get the OEM look, but with digital sound - what next? Well as you recall, the front doors now have the Alpine Type X 6.5 coaxial speakers that I really like. But the rear deck still has those old Pioneers.

This means that when I listen carefully, even though audiophiles will say that these days rear shelf speakers are used for "rear fill" - well sorry guys but I can still tell a difference in the tone and characteristics of the different branded speakers. In other words even if their function is rear fill, it still sounds a bit off.

So, I decided that the logical next step would be to order the Alpine Type X components for installation in the doors and move the coaxials back to the rear deck.  These components come with their own crossover, so they can be run passive, but wouldn't it be more fun to have an active cross over at work? And while we are at it, why not use a DSP to further improve the sound, if that is even possible? And since these speakers can handle a lot more power versus the 15W the OEM deck puts out, doesn't it make sense to buy a good modern amp that is bound to have less distortion than the factory radio?
Oh, and bonus - remember this Worx-installed wiring I removed? Well my cleansing/purification mission would ONLY be complete if I removed all of the speaker wiring as well. So getting the coaxial Alpines gives me an excuse to do all of the above!


Of course, this is easier said than done.

First, given the lack of space in the car, I had to figure out where to mount the amp and DSP.  I thought about under the seat and in the trunk but I don't want to have anything under the seat (as I learned before when the brain for my first navi kept getting kicked under the front passenger seat) and in the trunk, unless it was hidden with my skills it would not look nice. So I quickly settled on the space next to the battery, behind the seats but not in the useable trunk space.
Then I learned that Alpine makes a combined amp and DSP, the PDP E-800DSP.  But for some reason there is very little in the way of reviews on the internet. On the other hand, I found that AudioControl does a much better job of using the internet to market their products, and so I was able to form a favorable impression of their flagship DSP/Amp, the D6-1200. I think it's a bit bigger than the Alpine but not by much?

And yes, before anyone points out the obvious - there are a lot of other really nice products in this field. But since I'm a beginner at this, plus I'm not using the best possible speakers (nor is the car quiet enough to really allow for SQL quality audio) I decided to go with something that looked relatively straightforward but had enough cool features, especially how it is designed to work with and improve OEM stereos. (And the software looked much easier to use than the Alpine product).
So - first steps were to order all the parts. I first ordered the D6-1200 first from SonicElectronix: 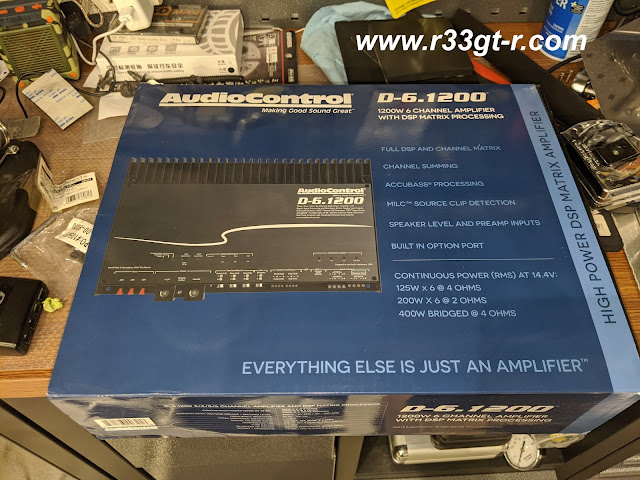 Contents-wise pretty straightforward. USB cable to use for tuning/customizing via PC. Feels very solidly built and well made. Can't wait to get this hooked up to new speakers! 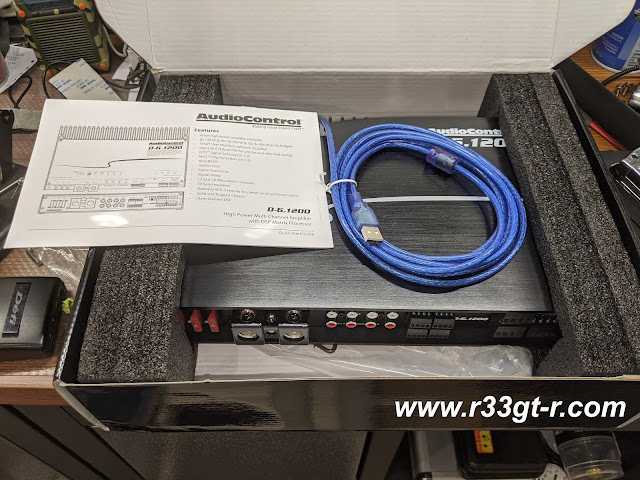 Then from a company called KnuKonceptz, the power cables and speaker wires - all Oxygen Free Copper (OFC) of course, as well as the main in line fuse and fuse holder, and a fused distribution block.  I also ordered items (thank you Amazon) such as tools and installation parts (such as ferrules and crimp connectors, electrical tape, a large piece of ABS plastic board, etc) to make the installation easier. 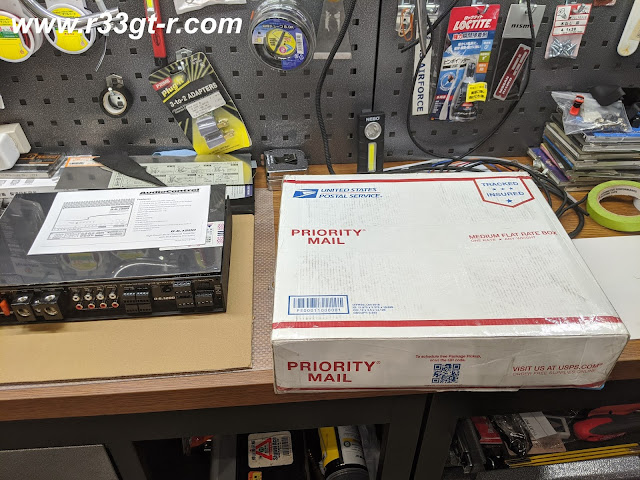 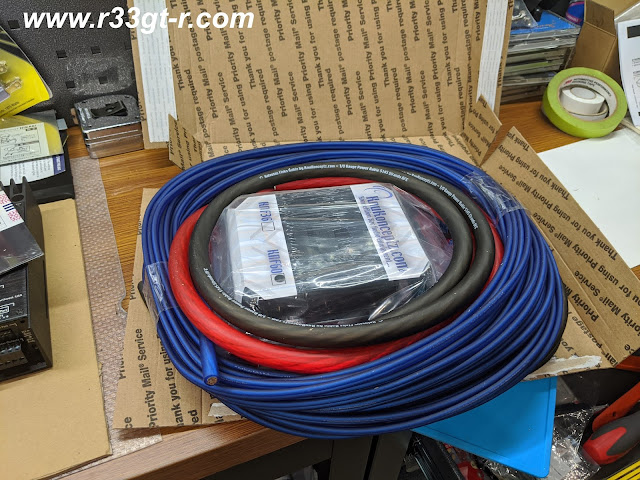 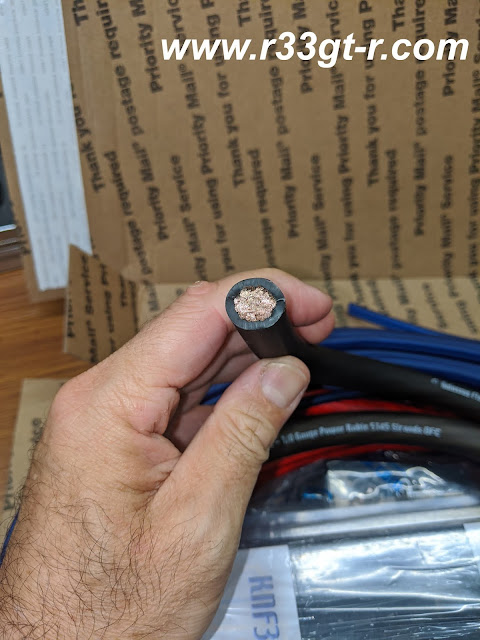 Some special battery terminals to allow easy hook up of the power cables. 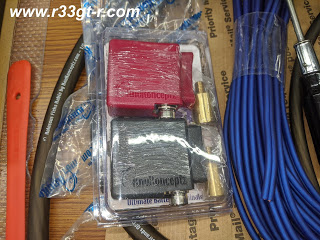 I also ordered some "speedwire" (nine 18 AWG wires collected into one common bundle) to use to connect the OEM deck speaker outs to the amp: 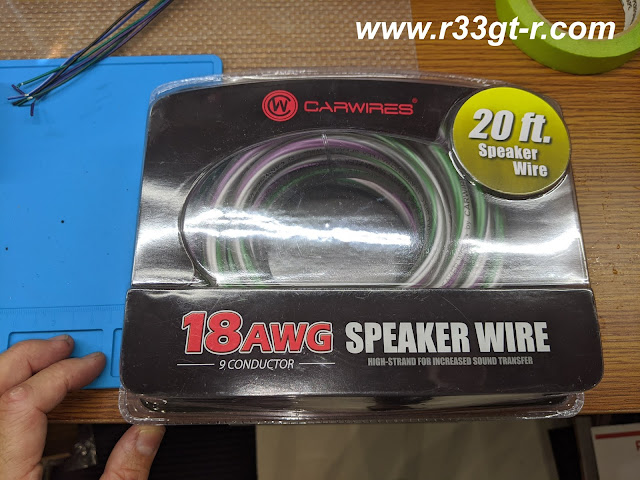 Once all the parts arrived, I had to figure out where to mount what.  The basic rule is to mount the main fuse as close as possible to the battery - not a problem.  But from what I learned from my research was that it appears that most installers like to mount the distribution block (if they use one) near the amp itself.  However, because I had decided to mount the DSP amp next to the battery in the space between the trunk and the rear seat, there just was not enough space for the distribution block.
And then of course, there were other tasks ahead of me as well. I had to remove the subpar wiring (the double wiring) in the doors leading to the speakers and replace with the 14 AWG OFC speaker wire.
Finally, the Alpine components still had not arrived... so where do I start?
I'll show you in my next post - with me only working a couple hours each evening, progress is slow (plus I'm figuring things out as I do the install).
Posted by Aki at 11:08 PM