So as I alluded to in a prior post, in addition to replacing the OEM radio/cassette deck with one that actually could still play cassette tapes, I removed the Morel Tempo Ultra 602 mid-range component speakers that had been installed in the doors. They are great speakers, but do not sound as good as they could without their tweeter components, which had been installed into the A-pillars (covered in the wrong colored Alcantara) by Worx but in the wrong location and aimed improperly, resulting in a terrible soundstage.

Even with that super advanced Pioneer CyberNavi head unit, the whole set up never really sounded good, even when playing CDs. Such a shame given Morel's stellar reputation.  And of course, I want to get rid of anything in the car that reminds me of Worx.
The problem of course with now finding, deciding on and then buying speakers (especially online) is that it is very difficult to describe the sound objectively and much of the listening criteria is subjective.  So in many ways you have to see what others say (and hope they know what they are talking about), look for brands you like, and hope for the best. Basically a gamble.

In the past I had bought off the shelf Pioneer car speakers for all 4 corners from my local Autobacs store, and been impressed. Then again, anything is better than the OEM speakers, but the Pioneers seemed to be very efficient power-wise and also very good at reproducing high frequencies, along with very good soundstage abilities.  In fact, to me they were much better than the Morels that Worx installed, although I think that objectively on paper the Morels Tempo Ultra 602s are a better speaker (and subjectively, some people will say they have "warmth" etc.).  A lot of it again was on how the separate tweeters were aimed, as well as the overly complicated CyberNavi stereo that got installed.

In any case, my thinking this time was, replace the Morels with something JDM - modernize as if the car left the factory last week.  Granted, I know that Nissan's premium sound system in the current Skyline is a Bose system, but for all other cars sold in Japan they use head units and speakers from Japanese suppliers. Plus I'm not so sure about Bose systems that aren't bespoke to a particular car.

Since I didn't want to go with Pioneer again, the JDM brand I focused on this time was Alpine. I was very impressed with the Alpine shallow mount subwoofer (SWR-T10) as well as the Alpine amp powering it in the trunk box that I had custom made, but unfortunately got thrown out by Worx.

For 6.5 inch Alpines, I quickly learned they sold 3 model lines overseas (Type S, Type R, and Type X) (strangely, the specs for their JDM products aren't very good....) and so I gravitated towards the premium Type X series, especially after reading about how this guy thought the Alpine X-S65 coaxials were "bloody brilliant" and how he also thought the 6.5 inch components were "bloody awesome"   He also has some videos, here is one:

Since he looks like someone who is REALLY REALLY into car audio, I think I'll take his word for it... Finally, I found that Crutchfield had an online speaker listening comparison tool  (SpeakerCompare) and while it sounded to me that the Morels had better low end sound, the coaxial (non-component) Alpine X series speakers sounded better to me on the higher frequency end.  A subwoofer would solve most of the lower frequency issues anyway...

In any case, I ordered the speakers from sonicelectronix.com - not only were these on sale, but they were offering to package them together with these silicon speaker baffles from NVX for free:

A week later they were at my door - a few days before I got the car back from Nismo, actually! 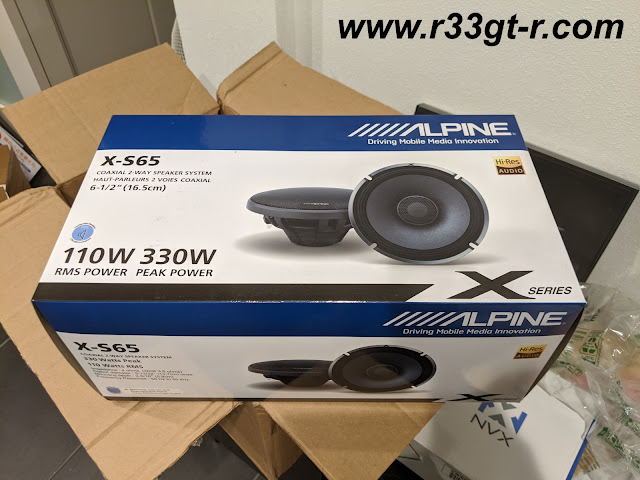 Most people will notice immediately that I ended up getting the coaxials, and not the components - because these were cheaper and IF they are good, the plan would be to move them to the back shelf and put the component versions up front.  If they disappoint me, well I didn't lose that much money and they will do for now...

So to replace the speakers, the door cards came off - very easy especially as I treated myself to this awesome Vessel motorized screwdriver. Highly recommended, don't know how I survived so long without this little gem.

The right side is always a bit more work due to the driver controls but I was pleased to see that this side looked ok as well.
Once the cards were off, I first had to peel off (yes, it was glued on) the steel rings that had the foam mounted around it. 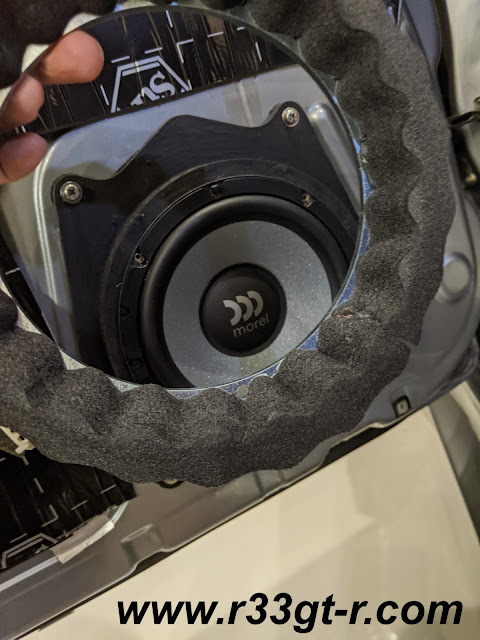 Then I unscrewed the speakers, only to find...
Here is a closer look after I snipped the wires.
I have no idea why you would have 2 positive leads and 2 negative leads going into a mid range component speaker.  Initially, I thought this might be due to some weird crossover set up, although when I looked inside the doors as well as under the dash, could not find anything resembling a crossover.

But then I learned from Ochiai-san that when Uchida-san at Nismo Omori removed the tweeters and their wiring, he did not find any crossovers. Turns out, that the CyberNavi had its own internal high frequency crossover and it was possible to wire the tweeters directly. 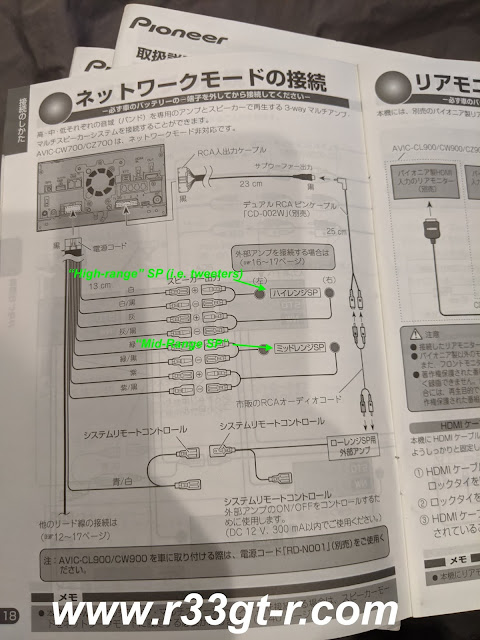 So likely this was the set up.  Then when I opened up the center console and looked behind the OEM deck, I found this:
This photo also shows that for the mid-range the OEM deck is putting out two wires for each channel (positive and negative) but then Worx Nakamura used these connectors to start running two wires from one? Why not simply use larger gauge wire from the beginning? Does anyone know if this is some kind of advanced speaker wiring technique?

Anyway, I then had to solder on proper leads to the ends of the wires I cut so that I could attach them to the Alpines (or any other aftermarket speaker): 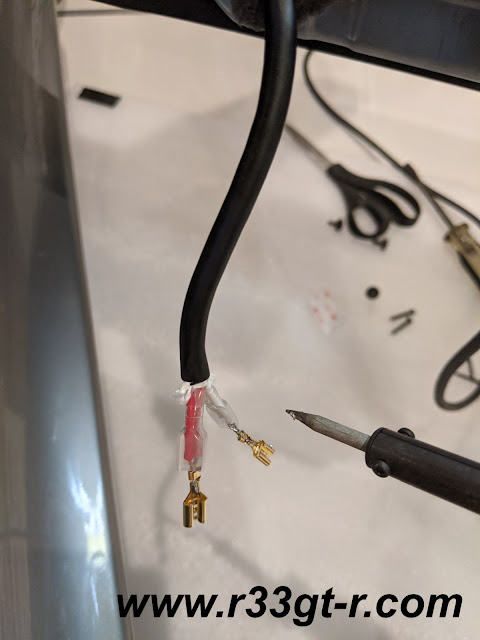 While the speaker cutouts were empty, I took a look inside. I then found out that Nakamura had installed this squishy foam (it feels moist, like the foam surrounds did).  I was also pleasantly surprised to see that, despite his criticism of my sound deadening attempt, he hadn't bothered to remove the sound suppression material I had installed the doors many years ago.

I removed this wet feeling grey foam and replaced with the rippled black foam that came with the NVX baffles: 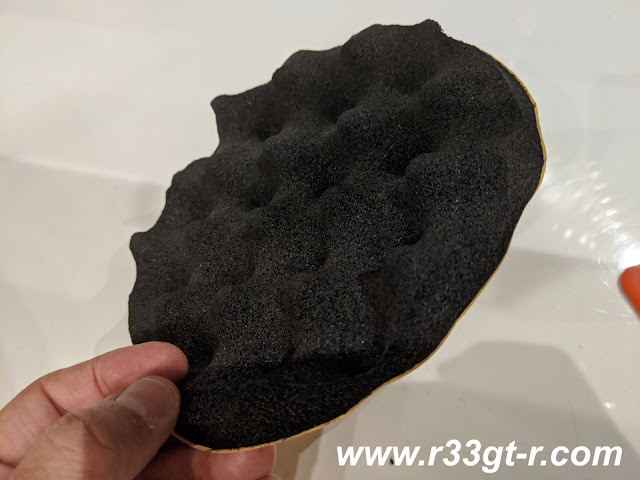 Here they are side by side:
This looks better I think. At least it feels dry to the touch. 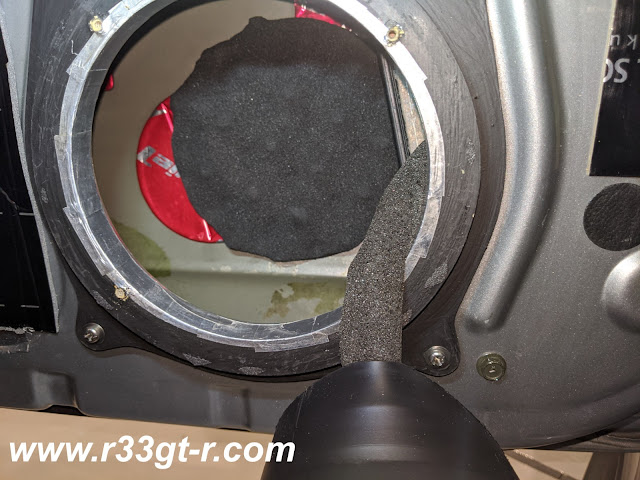 And here is how the silicon baffles go in: 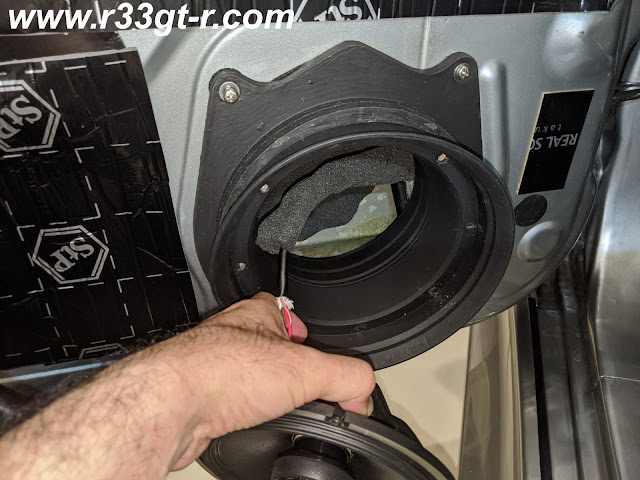 After they go in (the door is wide enough I didn't have to cut the silicon) I simply hooked up the Alpines and then bolted them in. 
Yeah I know, it's 80s pop, but a classic song, and it's on tape too - but you have to admit the bass response on these is unexpectedly good, and the clarity of the instruments and vocals is superb! I will have to experiment with other music (presuming I can find other old tapes that still work) and yes for some tapes there is a severe degradation in sound quality (for those I listened to too much). But on rarely played tapes like this one... wow!  Even the tape hiss doesn't bother me.  What's really interesting is that even though these are coaxial, the sound stage and imaging is absolutely spectacular! And I'm not even using a proper amplifier or DSP - just the head unit's 2x15W! Not sure how Alpine engineered that but they did...

Now, I'm really tempted to see how these speakers sound from a digital source... hold on as I figured out a very interesting way to do so!
Posted by Aki at 11:55 PM

Using two wires may just be easier if the terminals are designed for a smaller gauge of wire. However running two parallel wires instead of a single large wire is potentially dangerous. The two wires together may have say 10A capability, but if one wire fails your 10A fuse is "protecting" a wire only capable of delivering 5A. At which point you have a fire hazard. You have to fuse both wires individually.

It does not look like he has fuses on the individual wires. Maybe there are fuses but I would not run two parallel wires like that. I'm not much of a stereo buff anyways though.

Thanks for the comment! Agree about the ampere capacity, except I've never seen fuses in line with speaker wiring. But I think that might be issue, really - maybe he thought that two wires provided more total volume of wire, although the bottleneck is the single lead coming out of the deck itself. I guess this is a mystery that will never be answered unless somehow I run into Nakamura at some future point AND he agrees to talk to me. A big IF at this point.

Sounds good Aki! Its a shame that Nakamura did such a number on your car. I hope you get it all squared away.

I just updated my sound system as well. I went with some Alpine type S 6.in front and Kenwoods in the rear. I also added a Infinity Basslink-SM powered sub under the passenger seat. They all compliment the Kenwood DMX-957XR headunit well. I think the sound is quite complete now.

Jarreau - thanks for the comment. Interesting mix there, what kind of Kenwoods did you install? A friend of mine is thinking about an all Kenwood install, and while their head units are indeed awesome, I need some input on their speakers. I also like that you got an Infinity Basslink powered sub under the passenger seat - it fit in the 33??