So as soon as I got my car back home and parked from the alarm shop where I had the Worx alarm removed, I noticed something strange as I parked the car... 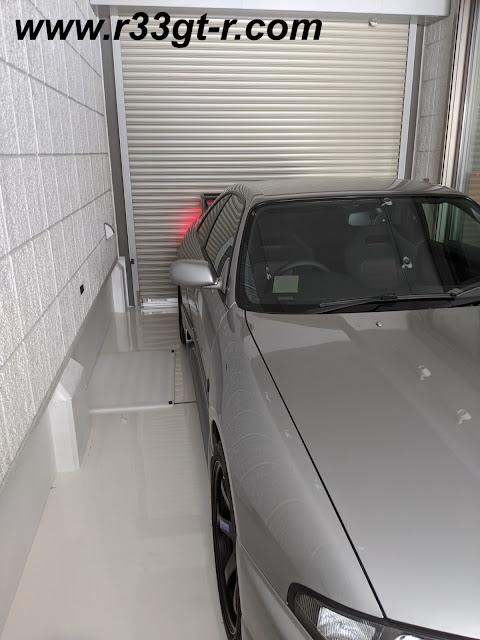 The car's brake lamps refused to turn off!
Yep, basically a deja vu moment (but in reverse) to this episode a few years ago when the lamps would not turn on! Back then, it was a faulty switch, so while I initially thought it was the switch again, I decided to take a closer look. But first, I had to pull the fuse to turn it all off!
As I did, I contacted Ochiai-san at Nismo Omori, not to complain of course (Me? Complain? Never), but possibly needing to book more service time at Nismo (even though I am doing my best to never have to go back there!) in order to fix this.  Ochiai-san immediately swung into action, checking to see if the brake lamp switch part was in stock... to our mutual horror, he discovered that the parts manufacturer was out of stock... and that there are 143 back orders having been placed!

Just then I discovered this:
and friends this is where it pays to have a clean car - anything that shouldn't be there... is new.  So I took a closer look at the brake switch and discovered:
that the stopper that keeps the switch engaged (so when the switch is closed, the brake lamps are OFF, and when you stop on the pedal, the switch opens and activates the brake lamps - so long as the switch doesn't fail I guess a fail safe arrangement? Better to have your brake lights on than off I guess.)

I guess Ochiai-san doesn't want me dropping the car off for a 600 yen part because he found that the stopper part was in stock and two days later I got this in the mail:
Now as I've recently been collecting the service manuals for the R33 Skyline, I made sure to use them to check before doing the work to verify which way the new piece went in.
As I crawled under the car I found more pieces of the broken old part.

Now, this area is VERY difficult to access.  Even though I initially tried to hold the brake switch open with a flathead screwdriver, quickly realized there simply isn't enough room there to then slide in the new piece. And I have relatively small hands, if you are a big guy good luck - both squeezing under there as well being able to getting your hands in there in a position where you can actually move. I was barely able to...

I did a quick internet search and found some guys in Australia had the same problem.  I did briefly consider their idea of super gluing a coin into the space, but since I had already bought the part, decided that would be a last resort move.

So, I decided that removing the switch to gain some space was the next logical move.
And once removed, there STILL isn't that much space. Maybe about 10mm?
Anyway I tried various ways to get the rubber part into that hole. Sometimes I would be able to get the piece partially inserted, but then I didn't have enough leverage to push it all way in. I tried using some dishwashing soap on the hole, but that just made everything more slippery.
Finally, in a moment of inspiration I used a long flathead screwdriver, attached some double stick tape to the end, and put the piece on it. 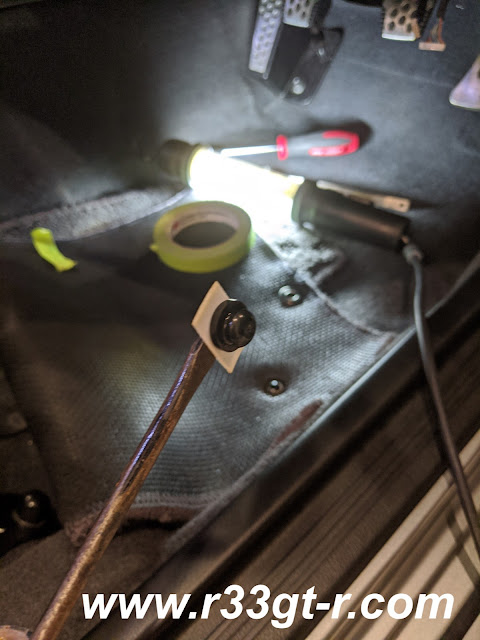 SUCCESS!! Couldn't believe how easily it went in! Should have done this from the beginning.

So then it was just a matter of reinstalling the switch.  I tried to get the switch into its former position, but I may be a few millimeters off because the lights come on IMMEDIATELY as I start to apply pressure to the brake pedal. I'm pretty sure that in the past it took a bit more for the brake lights to activate, so I may have to adjust the switch a bit.  But the good news is that now my brake lights work properly, so if I have to take the car somewhere I can simply drive it.

So one more issue solved, without paying $$$$ at the dealership or Nismo. But a few more problems of the DIY type before I can send the car along to bigger and better things.  More posts coming soon!
Posted by Aki at 11:24 PM

Haha, I've had this happen to the R32 years ago. And once I learnt about it, I immediately knew how to resolve it when it happened to the R34.

Weird coincidence, on the MR2OC Facebook group someone actually had the exact same problem. A lot of people suggested using some glue and a coin which is a pretty interesting, if bodgy way of fixing it.


I simply put the rubber piece over the hole, let the pedal off to keep it in place and then pushed down the pedal, which pressed the rubber into place ;).

That sounds genius! (note to self, do it the easy way next time!) Thanks!