Picked Up From Nismo Omori But...

So while I did pick up the car from Nismo last Wednesday, I'm not going to write about it here because I have a long overdue Speedhunters post on the event coming soon - I'll post here when it goes live. Meanwhile because there are other things going on with the car, I will gloss over the pick up (for now) and talk a bit about what I did after leaving Nismo Omori Factory and then in my next posts a bit about future plans for the car.

Anyway, first order of business was to head over to the car alarm specialist that Ochiai-san had found. This shop specializes in a variety of car alarm brands, including the one that was installed by Worx. Given the shop's willingness and confidence in being able to remove the wiring, I was looking forward to finally getting rid of this cancer in my car.

Because every drive in my car could be my last, instead of putting the car on carrier truck I elected to drive the one hour to Yamato City, where Pro-Tecta Shonan is located.  I was able to experience some high way speeds, along with some usual inaka (countryside) stop and go traffic. What an awesome car! So easy to drive, so raw and direct! And yet, it feels so much more civilized now, with the ride much less jarring (and yet still very firm) now, and yes the roof insulation that the Nismo Omori techs installed REALLY making a huge difference! Combined with the very quiet Pilot Sports 4S (compared to the previous tires I had on before), dare I say you can have a conversation in the car at speed without raising one's voice now?
The owner, Mizutani-san was waiting for me and immediately began to inspect the car.
There was also a white R33 GT-R there also for an alarm install, I didn't think much about it at the time (so no photos)... meanwhile I traded contact information with Mizutani-san before I departed.  He assured me he would of course be super careful taking the car apart to find and remove the wiring. Just in case, I asked him to message me if he found anything weird.

And he did:
So on Sunday afternoon, I went back to pick up the car.
At last, I got to check out the headache of an alarm.
As I made it a point not to bad mouth Worx too much, Mizutani-san was able to give me a fairly objective report.  He said that he could tell that the installer was skilled (Mizutani-san has more years in the business however) and that the install was done with minimal cutting and splicing.  Finally some good news (relatively speaking), but as I told him, it was mainly in the OTHER areas where I found a lot of problems due to Worx Nakamura's questionable decisions and failure to let me know what he was doing.

So does that mean that the guys at Nismo were in over their heads? My interpretation is that they simply did not want to learn alarm wiring on my dime, so that is fair.  It is after all a business, and I'm not a rich man like some I know, so a line had to be drawn somewhere before it became too costly for Nismo to continue.  Plus as we all know Nismo is basically OEM, so that is their comfort zone. And that of course means not everything at Nismo is the best... or better stated, what Nismo does isn't for everyone (hint of possible future post). 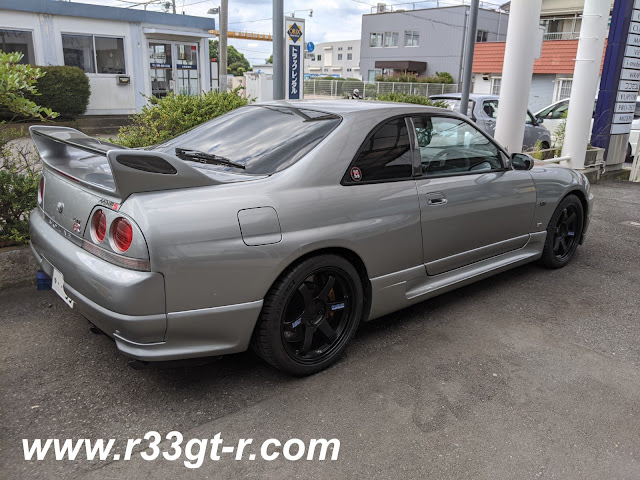 The lesson here friends, is avoid installing Japanese-brand car alarms. They have too many features, and place a premium on flash versus ease of use.  My old Clifford alarm remote had two buttons, this one had 5, and so many cute graphics that the battery quickly wore out in a month (and they must have known, as it was super easy to change the batteries - no special ones needed, just AAA size). I don't recall how many times I changed the battery on the Clifford remote on the other hand... Plus I would like to think that US brands probably have more experience against car theft (a good thing) due to more cars being stolen in the USA (a bad thing).  Mizutani-san agreed that Cliffords (he installs them too) were easier to use, but said that they tended to break more so there wasn't a perfect solution.

Mizutani-san also told me that the owner of the white r33 GT-R that was there when I dropped off my GT-R was also a Nissan employee, but over at the Technical Center (an engineer or designer I'm guessing).  Apparently he spent about an hour checking out my car, remarking that I must have spent a lot of money on it so far... I told Mizutani-san to have the guy contact me and I'd be happy to discuss all things R33 GT-R!

Anyway I said my good byes and drove home.  I cleared out the other vehicles from my garage, and immediately did what I had to - give the GT-R its first wash in several MONTHS!
I thought it was weird that they didn't wash the car at Nismo Omori Factory, but then again their ceramic coating contractor took a look at my car and told them the car was too clean to make it worth his while to do any work on it. And knowing that they know how OCD I am, I think not washing my car was probably the right thing to do (they wouldn't want to be accused of scratches done in the course of the wash)...
So now that the car is back in my garage, is it done? Nope, a few more things need to be done before that can happen... this journey isn't quite over yet...
Posted by Aki at 10:06 PM

Are you planning on installing something to replace the old alarm? Curious to know what you chose. I've been looking for a pure immobilizer system, the only one that appears to be reviewed well is the Autowatch 573 but the only installers for those systems are in Canada. I may just have to buy one myself and install it on my own.

Well, let's just say that my car will be well secured in the near future. With an immobilizer system amongst other things. Probably not good to disclose which alarm/security system I go with, right? But thanks for the comment!