Keeping Up the Skills (or at least trying to)...

So thanks to my friends Derek and Mike at Pacific Coast JDM, I got to do some race driving as a guest driver at an endurance race last weekend, Race 3 of the Mobara Endurance Race Series at the Mobara Circuit in Chiba.  I know this isn't directly GT-R related, but I learned (and relearned) so much about driving and I think it's important that anyone who really considers himself/herself a gearhead go out and get proper driving lessons, or even better, participate in races/track days.

The day started early - the drivers meeting was scheduled to start at 0800 and by the time I got there at 0745, Team Gaijin Escape (Derek and Mike) were already busy unloading their race car, a very stripped down Mazda Roadster (NA).
Back to the race car - here is the cockpit - all business! No aircon, no radio, just 3 pedals, a gear shift and a steering wheel (the speedo and tacho weren't really working...)
Before qualifying, we all got busy doing what we could to get the car ready. Not wanting to touch and break anything I did what I'm best at, cleaned up a lot of dirty parts...
Amateur racing is always fun, because it's all about bang for the buck, fuel and driver change strategy, and driving skill.
Anyway, between the drivers meeting and the race, we had plenty of time to get the car prepped, as well as time to practice on the track.  As this was my first time on the track, I was clearly the slowest on the track, trying to figure out the best lines, braking and acceleration and shifting points, etc.  I did manage however to shave about 5 seconds from my initial run to my best practice lap time, with my best time in the 56 second range (I was assured this wasn't bad for a first timer, although everyone else seemed to be running in the 52-54 second range).  The car is actually very easy to drive, telegraphs early on when the rear end starts losing grip or when it's about to understeer. Not much power but very responsive and a pure driving experience!

Then it was time for lunch!
And then the race began at 1330. Five cars - S15 and S14 Silvias, our Roadster, a weird Nissan Micra, and a Mitsubishi FTO! 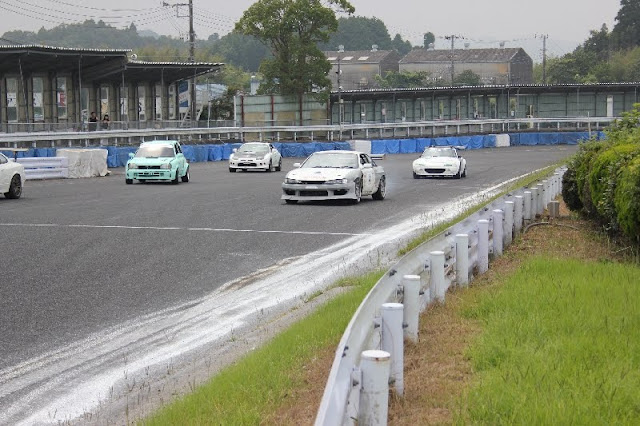 So...I went second, after Derek started the race.  While waiting my turn, Mike was kind enough to give me pointers about shift and braking points, as well as some track idiosyncrasies.  Nevertheless, I will admit that during my stint, I was getting faster and faster despite the turbo-charged competition, got a bit too overconfident and tried to go a bit too fast in the last corner - hitting the apex incorrectly in 3rd gear rather than taking what seemed to me a slower and sharper turn... and the centrifugal force was a bit too much! Meaning that I ran into the cushions on the sidewall. Ouch!

Luckily I wasn't hurt, and the car didn't seem too damaged either:
Little did I know, however, that the cushions had also ripped off the rear wing!
We were all surprised at how the car, without the rear wing, lost a lot of rear traction. Unfortunately, this meant that both Derek and Mike ended up a couple seconds slower from their qualifying times in the 52 and 53 second range after they got in the wheel after I drove.

So basically - yes the guys were doing great, and the car was competitive. Until I got behind the wheel - not only was I slower, I ended up damaging the car (less rear downforce) and thus slowing us down.

And the result? There were only 5 cars in the race, and we came in fourth... in my defense, all the other cars were turbocharged and insanely fast (especially the S14 and S15) and obviously the drivers were all veterans of the track. Although they've yet to have a podium finish in the last 2 years, Team Gaijin Escape could have done much better, although secretly I believe that even if I hadn't damaged the car, the end result would have been the same, albeit with a few more laps to our name.

The only consolation for me (Derek and Mike were very understanding) was that the race winner was this stripped down Nissan Micra/March. Not only was it super fast (and loud), but their main driver was super skilled, pulling lap times in the high 40 second range - faster even than the Silvias! So as a Nissan employee something to be happy with, I guess? 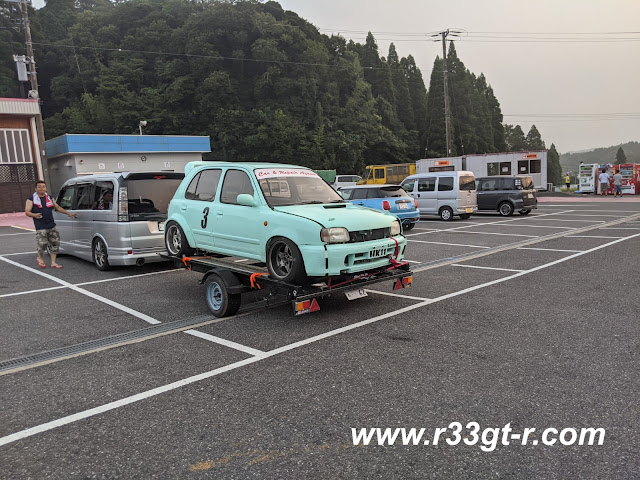 In any case - many thanks again to Derek and Mike for the invitation and for putting up with my poor driving skills. Obviously I've been hanging out with the wrong crowd, I need to be driving much more like I used to on the track! Maybe that's something I will start doing again, even if not in the GT-R.  Maybe invest in a more track worthy car? Stay tuned...
Posted by Aki at 11:33 PM

If you just want to get cheap practice in I would definitely consider a 125cc shifter kart, those things are ludicrously fast and dirt cheap to run. There is the minor issue of having space to run one though.

Definitely! Would love to get into karts. But here in Japan unless one has lots of land space to store non-daily used vehicles, it can be tough to just own one. Maybe a rental - will have to check out the local tracks to see what programs they have. Or maybe get a sports car that I really don't care about long term and hit some track days? Thanks for the comment!!

Looks like there's a circuit way out in Tochigi with a storage program or rental to dip your toes in: https://festika-mizunami.com/cart-garage/

There's another one in Gunma but I'm pretty sure that's even farther: http://haruna-motor.sports.coocan.jp/

Karts are definitely not 100% the same as cars, there's no suspension so they're impossibly direct compared to a car and you can get away with very harsh motions that would normally cause suspension to react unpredictably. So if you want the full experience you probably just want a Miata or something like that. I'm a track noob though so karts are "enough" for me, I'm just going to take my R33 to a few skidpad days so if I accidentally find the limit I'm not going to wreck the car.

Found another one, probably the closest to you? Could be fun for your kids too if they're into this kind of thing.