Before I continue talking about the fixes I am being forced to make to bring the car's interior back to OEM, sharp eyed readers might notice that my garage is much more weekend mechanic friendly than before.  Let me get you guys all caught up with what I've been doing this year.

Beginning with my first post of 2020 and continuing with all the posts marked as "(Garage Series)," I've shown how I have slowly made improvements to the most important room in the new house, the garage!

As a recap, I first had to get the garage floor redone to remove an incline, then had the floor covered in an epoxy coating, then I got a shed for storage overflow, and then finally got an industrial grade sink as well as a Braava floor cleaning robot.

But maximizing garage storage space and keeping things better organized are what I wanted to improve, and I also wanted a work bench in order to have a safe place to do smaller projects.  And of course, looking good is important as well. This means being organized is key - up until now, all of my tools and supplies have been scattered about in various boxes and metal racks, and frankly it's not the most efficient nor comfortable way to do things.

So, first order of business was to utilize the wall space - this garage is large, with a ceiling height of about 3.4 meters.  That means the walls SHOULD be utilized to hang items, and the easiest and cleanest looking way, from what I have seen, is to use slatwall (think vertical!).

The problem for me was that literally no one apparently sells slatwall in Japan (I found companies selling the hooks and shelves for slatwall, but NOT the slatwall itself... weird).  I looked at companies in the USA, but in the end I found that pricing and customer service was the best out of China! (call me un-American, but when American companies are getting their stuff made in China...why not buy direct? Alibaba really makes things easier).

So I made some rough estimates as to the quantity I needed, and a few weeks later:

So the trick here is - see the wall behind the slats? That's made of "ALC" or Aerated Lightweight Concrete.  This requires special bolts to be used to attach things to the wall.  You can see that although I cut out (using a jigsaw) enough space for the faucet and the electrical outlets, the bottom slatwall piece is using 4 massive ALC specific bolts to anchor itself and the top piece. 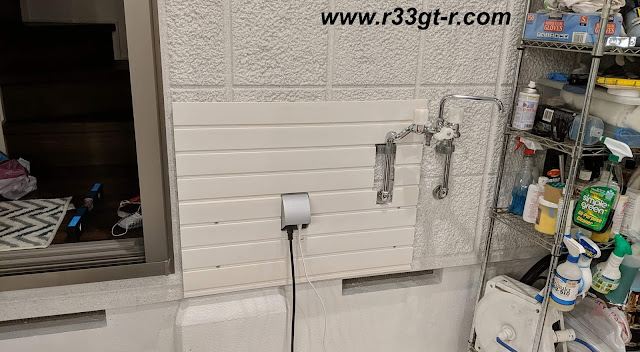 But once that first piece is in place, it's really just a matter of stacking additional pieces onto (the bottom and top of each are designed to interlock) each other. 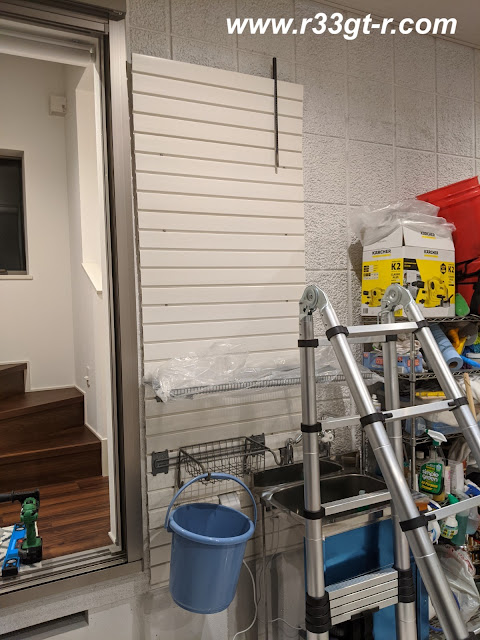 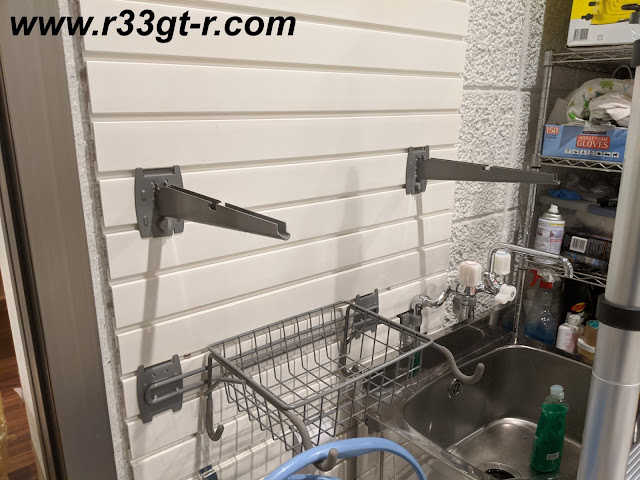 And once this side of the garage was done, then it was time to attach this odd corner 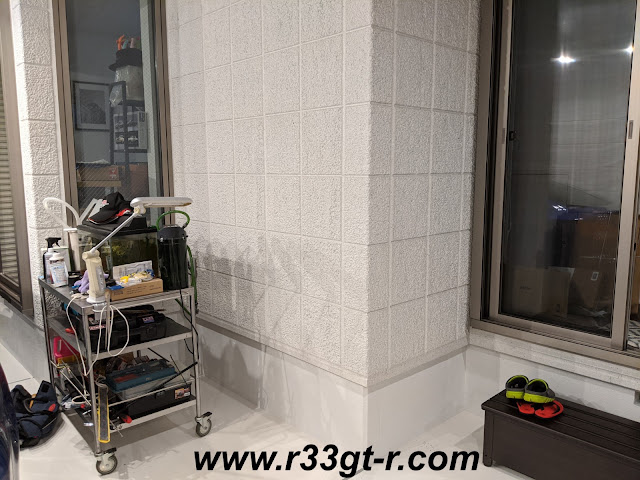 You will note that there are joint pieces that join, at 90 degree angles, the slatwall pieces. So I used some PVC cement and created the angle.  And then it was just a matter of screwing the panels into the wall and then stacking up (and screwing in) additional panels on top.

And the completed (kind of) result? Well this is looking much cleaner and utilitarian, but there is still too much clutter. I also haven't used all the hooks and shelves I was sent. 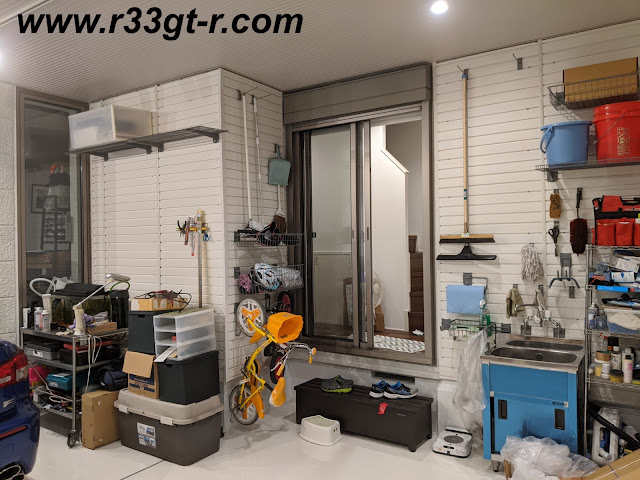 To take care of the rest of this clutter, I needed cabinets... and that was another crazy adventure which I'll talk about in my next post (and featuring a minor celebrity who came over to help...)
Posted by Aki at 10:29 PM

Man, even by US standards that is a very cool garage. 3 car garages here are generally only found in very expensive houses.

Thanks! Truth be told, the space is like 2.8 cars... and now with the cabinets more like 2.5. But looks like eventually I will have to get a lift of some kind...

Well, at least with the 0.5 car space you won't be forced to shuffle cars around to work on bikes.

Curious to know what solution you decided on for a lift, I think for my living situation the answer is just to go to a local DIY shop with a bunch of two post lifts if I ever need one.

Nothing on the lift yet, although now I am thinking that if I install one, it should be on the FRONT side of the garage, so the car in the back can be driven out without having to move the car in the front (assuming only 2 cars in the beginning). Also there is more space up front so easier to work on the cars too...