So a few more days to go until I pick up the car from Nismo OMORI Factory... unfortunately it won't be going straight back with me, I first need to drop it off at the specialist alarm shop that Ochiai-san found... and then some other stuff needs to be done... details in an upcoming post soon!

Second, Omori Factory isn't quite done with the car, as at the very least they still need to fix the cigarette lighter wiring and the front door speaker leads (they didn't have the parts in stock in time for the repair schedule)... but rest assured I have a few more things to be done (or at least, I'm getting estimates as we speak...) and so after getting the alarm wiring removed I will be making a return trip back.  Ochiai-san did confirm that the photos of the new headlight bulbs he sent last week was just to show the comparison between old and new, and that in fact both were replaced, and finally that in person the new ones look even whiter than the old ones.

On the other hand, they were able to get a new ashtray for the car:
And here is the parts number:

Ochiai-san also told me that they lowered the car as low as "legally possible"... which I understand is 8cm from the road to the lowest part of the car.
In my car's case, the lowest part is the Mine's front pipe... and looking at how it looks compared to the rest of the underfloor, which has been completely refreshed, it doesn't look that pretty anymore, huh. Maybe I need to make a trip to Mine's in the near future...??
So I guess the front pipe is costing me 1.5cm... well I guess so long as it looks better than this: 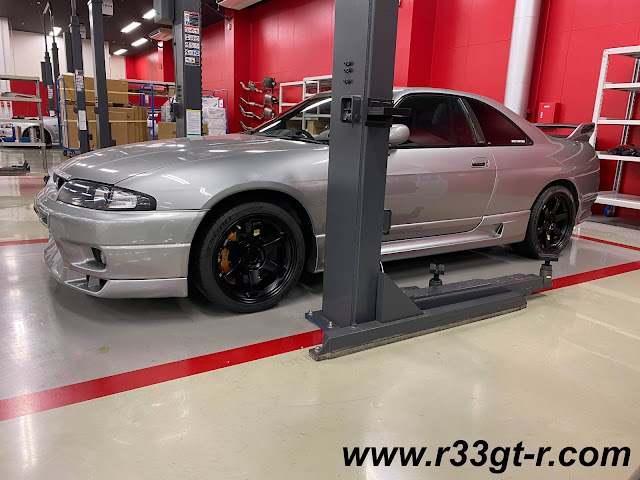 On the other hand, in the past I found it was quite easy to change the heights of the Ohlins myself, so once it's back if it still looks odd we can lower it even more quite easily.  Although then yes we have to be careful about scrapes on not-so-smooth roads, and then I also wonder if the tires will rub against the inner fenders.

Finally, when I first dropped off the car they asked me if I wanted the car ceramic ("glass") coated. When I asked what happened to that option, turns out their supplier had checked out my car and said it was already "too clean" and that any work he would do to prep the car for the ceramic coating wouldn't really be noticeable. Win! It means very little prep next time the car goes in for a ceramic coat!

Anyway, while the car isn't as perfect as I wanted, it's come along way and we will keep fixing things one step at a time...
Posted by Aki at 10:03 PM