Call from NISMO - It's The Worst They've Ever Seen!

So I got a call last Thursday from Ochiai-san at Nismo Omori Factory.  Bad news, and he didn't mince words to describe what he thought  - that this is the worst they've ever seen! Not exactly what I wanted to hear, but I'm pretty sure everyone at NISMO believes me now on how bad Worx AutoAlarm is.

He was referring, of course not only to the mess of wires behind where the CyberNavi used to be, but what they found as they began to remove the wiring.
One of my requests this time around was for the experts at NISMO to remove all the stuff that Worx AutoAlarm had added, and bring the car back to OEM condition.  Long time readers of this blog know that I had made the wrong choice by going to Worx and trusting the owner, Nakamura-san, to "install the best."

That "best" has turned out to be not only "mediocre" (and now I suspect, judging by the date of install vs the date of product release, he installed used or prior year model parts) but in doing the install Nakamura not only damaged several parts, but he also threw out many parts on the car without asking me, and installed untested parts that might have led to long term damage.  So clearly, this guy seems to have problems with judgment and common sense. But now NISMO, who's assigned their best electronics guy Uchida-san to the work, has confirmed my worst fears - that in doing his install, it appears Nakamura took a lot of short cuts, made illogical and irreversible decisions, and in some parts, even damaged other interior parts. Based on what I myself found earlier, I guess it's not surprising to find out that in areas that couldn't be readily seen, it was just as bad.
For example, some plastic stays on the back of the dashboard have been filed off -  likely in order to allow the install of the relocated HVAC unit combined with the shift surround. Unfortunately these stays are designed to support the OEM stereo and HVAC units.
So now, I can either buy a new dashboard, or more likely, Uchida-san will have to figure out how to reattach some brackets for support or some other alternative. 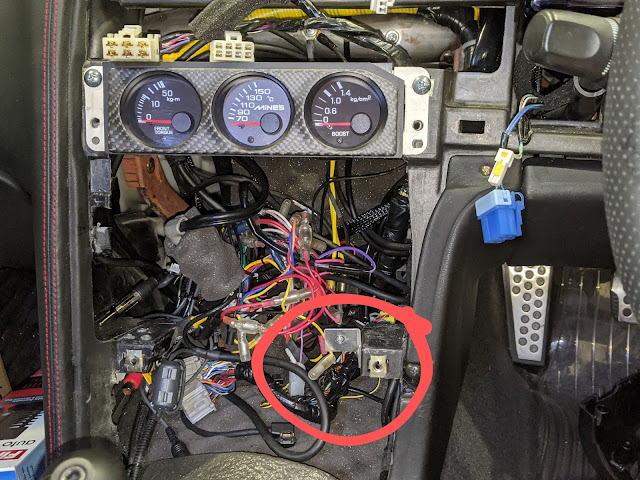 Incidentally, here you can see the bracket that Nakamura jury rigged to hold the CyberNavi. So that enormously heavy piece of electronics was supported by 3 screws on the front, and nothing in back, with the unit itself resting on the sea of wires behind it. Unbelievable, really!
An example of a shortcut is that the existing Blitz boost controller was re-wired into, along with the new ETC reader (nothing wrong with my old one...), audio related wiring behind the CyberNavi, presumably because it's easier to run all aftermarket accessories from one central power source. Not a big deal maybe, but now that the CyberNavi is gone, these parts will have to get power from separate, and proper, sources. Did Nakamura not consider that one day I might want to change out the CyberNavi? What happens when it breaks? I think a true professional installs items so things can be reversed with little hassle, and unrelated parts should be able to operate independently.

This one way thinking was also apparent in the speaker wiring - the original harness was gone, replaced by what appears to be slightly higher grade wiring.  To be honest, I'm not too crushed about this, since I don't plan on reinstalling OEM speakers, and newer wiring, regardless of gauge, will likely be of a better quality than the old Nissan OEM wiring for purposes of sound quality. But, as with other items he removed from my car, Nakamura never asked me if he could cut and throw out the OEM wiring.

Like this:
Now, we likely have individual speaker wires running into the center stack, making for a complicated and unlabelled mess.

Uchida-san also found that the old Pioneer coaxials in the rear deck were not hooked up to anything. In fact, the wiring for these speakers seemed to be connected to CyberNavi leads that were labelled for the front? So as I hinted earlier, I asked them to reinstall these Pioneers in the doors, to replace the Morels that will be removed.  This would allow me to easily first install an aftermarket stereo deck without worrying about a separate amp (these Pioneers were installed amp-less alongside with the old Pioneer deck I had, back in 2006), enjoy it for awhile, and then figure out what aftermarket speakers to get.

As for the alarm install itself, it turns out that Nakamura hacked into the main electrical harness (and likely, other harnesses such as for the doors and dome light) in places that don't make sense, meaning that in removing the alarm, they will have to be very careful to restore the harnesses to OEM condition.  The concern is that without knowing what or where he hacked, simply cutting out the alarm might result in certain things not functioning.  Alternatively, we could just install new harnesses, but this threatens to drive up the cost.  Ochiai-san wanted my permission to let the alarm be and initially I agreed, due to time and cost considerations.

Friday morning, Ochiai-san sent me the following photo to show how Uchida-san was at the shop early, finishing the cleaning up of the stereo wiring mess. I'm curious to know his solution on the stereo output wires. Guess I will find out when I pick up the car...
Later, when Ochiai-san called me to report on progress, I told him I had changed my mind and wanted the alarm removed at any cost.  Might as well get it taken care of properly.  Ochiai-san and Uchida-san were also curious as to why the alarm kills the starter on command (as it's supposed to via the remote) but at other times kills the starter at random, making starting the car a perennial gamble.  Is the alarm dying? If so then I told them we need to get rid of it.  So, rather than risk cutting out the alarm and ending up with a car that doesn't start period, with my permission Ochiai-san has now decided to call Worx AutoAlarm's Nakamura to ask what he did, as they don't want to assume anything at this point, given what they have seen.

In any case, by the end of the day Ochiai-san sent me this photo, showing how much cleaner it all looks now.
So I wonder how much more needs to be done. From the photo above I can see, in the passenger footwell, the grey boost controller and small black ETC reader, but there still is that large box behind them (and its related wiring) which I suspect is the brain unit for the CyberNavi, and which I want gone.  The cigarette lighter and ashtray have to be installed, as well as the HVAC unit and a blank spot for the incoming 1 DIN stereo.

I'm sure you all want to know what happened when Ochiai-san called Worx... for that, you'll have to check out my next post tomorrow!
Posted by Aki at 11:39 PM

As sad as the occasion is, it is still a very entertaining post. I am very excited about the sequel.

I have been meditating for a while about security retrofits and I still think that the best option is just a GPS tracker hidden in the car somewhere, the trackers these days have an input and output pin so you could do interesting tricks like trigger a text message alert if a tilt sensor goes off (someone is jacking up your car/putting it on a tow truck) or trigger if the car leaves a geofence, then you can immediately go after the people responsible and call the police.

In the US the last part doesn't really work, police don't respond to auto theft in progress so you have to do it yourself.

I don't know if casual hotwiring is a thing in Japan, if at all. If it is you may still want an immobilizer like the R34 system, but it might also prevent the car from starting when you want it to.

Anon - many thanks for that! Yeah, GPS trackers (like for kids too) are getting smaller and super cheap these days. Might be something to hide away, not sure how to keep it powered up all the time though.

Not sure the police thing would work in Japan either, I think in most cases it will have to be self help.

RE immobilizers - maybe if there is an aftermarket engine CPU that had this feature, that might be best?

You would have to connect it to the car battery to keep it charged, but usually these trackers have an extra battery that they use so they can send out alerts for a few hours if someone tries to disable trackers by disconnecting the battery. With age the battery may become unreliable though and need replacement. Also if you're dealing with dedicated/organized thieves they will move the car into a shipping container ASAP to make sure that any trackers can't communicate to the outside world, so it's not really a silver bullet...

I don't think companies like Haltech/Link/Adaptronic/etc will be interested in the code needed to properly implement an immobilizer within the ECU. They want to implement stuff like automatic transmission support or race features like torque management, immobilizer is pretty far off their radar. You did give me an interesting idea though which is to use the standalone ECU to trigger the fuel/ignition cuts and provide the ignition switch signal to the immobilizer. This way you can avoid splicing into the OEM harness or trying to source OEM connectors and if you discover some issue with the immobilizer you don't have to rip out the entire system, you can just change the ECU setting to ignore the immobilizer while you debug it.

Forgot to mention - this also means the immobilizer won't be effective if someone wipes the ECU. Personally I don't think the kind of person to try hotwiring will be able to figure out anything that requires bringing a laptop and flashing an ECU but that's just me.

Good point, but if someone has already stolen the car, taking out the ECU means the car still won't start. IF they leave the car and just take the ECU, car won't start either. So then yeah we would need the GPS to find the car. I wonder how accurate the new GPS modules are...

GPS accuracy varies based on the signal environment. In good conditions, good antenna, you can probably get 15 foot accuracy. You would have to install the tracker somewhere where the sky is visible. Plastic and glass are RF transparent, metal and metallic tints are not. Normally I would expect the AIO trackers to get maybe 30 foot accuracy accounting for realities of installation. Worst case 100 foot accuracy if the car is in somewhere like an urban canyon with a lot of skyscrapers.