Another Update From NISMO Omori Factory

So last Friday afternoon I got the following update from Ochiai-san...turns out that even though the crap alarm keeps interfering with the starter motor (so I guess the immobilizer works..., in a way... ha ha) work is progressing on other parts of the car.

One item that I had asked to be replaced with new...turns out it HAD been on the last go around. I forgot to check, Ochiai-san forgot to tell me... oops.
I also got an update of sorts on the new headlight bulbs.  If you recall from this past post, one of the Phillips HID bulbs had failed, and in order to pass Shaken the techs at  Nismo Omori Factory hurriedly installed an aftermarket bulb sold by Sphere Light.
So here is a photo comparing the two:
But strangely I did not get sent a photo of both installed. Either they did the install and Ochiai-san simply forgot to take an "after" photo or they are saving me a few yen by letting me install the passenger side one myself (frankly, it's the easier one to do as the back of that headlight is more easily accessible as you can remove the airbox to get clear access to it).  Either way is ok with me! 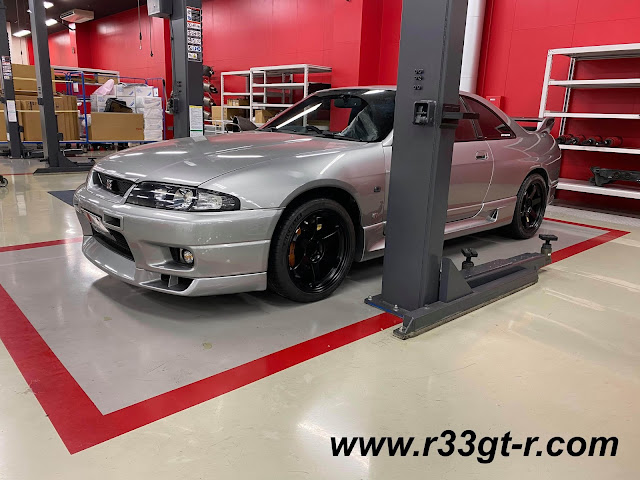 Finally, it looks like they installed the Ohlins DFV as I mentioned last time and have installed the newly refurbished (and of course, glass coated) wheels - note they haven't yet applied the Rays stickers yet - with the new tires mounted.  In addition to the requisite alignment they will also be lowering the car to the bare minimum allowed under the Shaken rules... so a few more cm for sure.

Meanwhile I'm also happy to report that Ochiai-san has found an alarm shop that is willing to help out with the alarm removal. It's not the same shop that I went to many years ago in Tokyo (where I will go again to get another alarm installed) but one that is an authorized installer of the same alarm system that WORX Autoalarm "installed." Hopefully Nakamura wasn't too clever and they can sort out the mess.

So hopefully by next week the car will be ready... keeping fingers crossed...
Posted by Aki at 2:04 PM

You can definitely refurb the brackets on the brake cooling duct, I'm having pretty much all the brackets on my car wet blasted and re-coated: http://blog.garage-yoshida.net/archives/11829

awesome! Thanks for the information!!!

If you haven't already, I would just email Garage Yoshida. The guy that runs it seems pretty nice and humble, but I haven't met him for extended periods in person.