So while waiting for the Alpine components to arrive, I decided to clean up the rear deck area and at minimum run new speaker wire from the DSP amp to the new rear speakers. I had actually already removed the rear parcel shelf while working on installing the amp and the wiring.

A closer look at the speakers showed that there was some degradation.

The parcel shelf itself needed some help as well:

A closer look at the speaker grills showed a mottled texture, almost like mold. 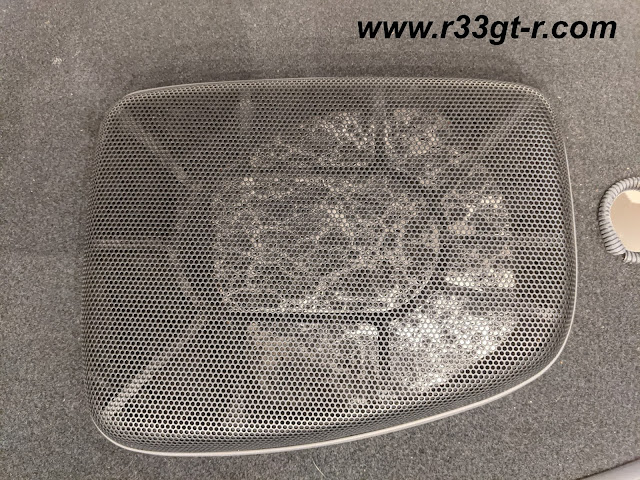 So I removed them both to try to figure out a way to clean up. 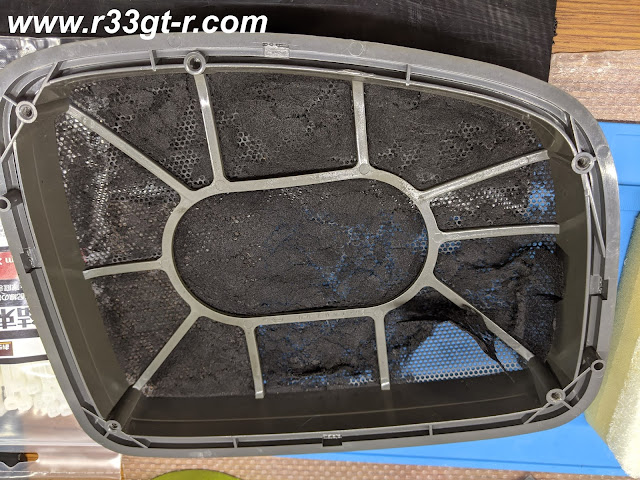 Obviously this is beyond saving. I guess Nissan used this black tissue-like cloth to protect the OEM speaker? Thin enough to let sound out, thick enough to protect from fading or degrading from sunlight? 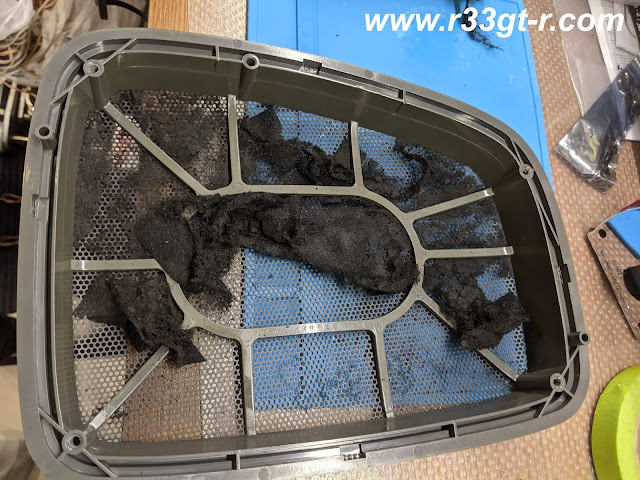 Since I didn't want to remove the grill from the plastic housing, I had to be very patient and use a small screwdriver to slide the tissue cloth out of the nooks and especially the corners. Check out this dust! 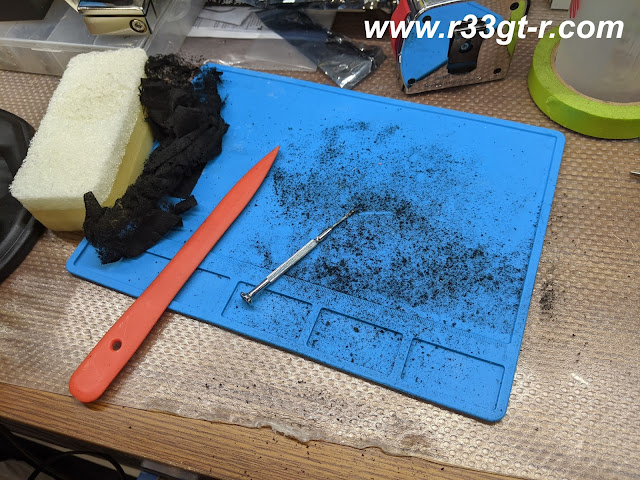 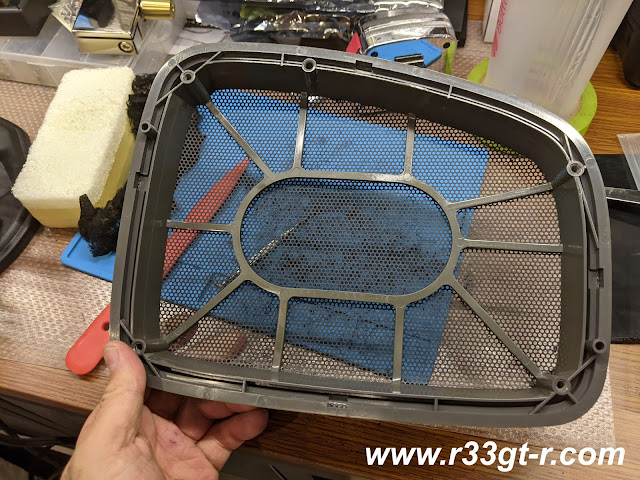 And yes I was tempted to cut away the supporting plastic ribs, but given the age of the part decided to leave well enough alone for now. Then it was onto first removing the old Pioneers (and yes had to figure out how to tuck away the existing speaker harness/wiring): 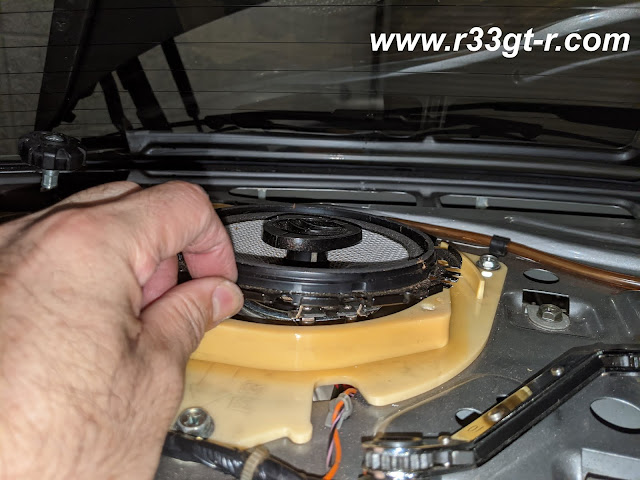 Whereupon I found out that the Alpine coaxials would not fit! 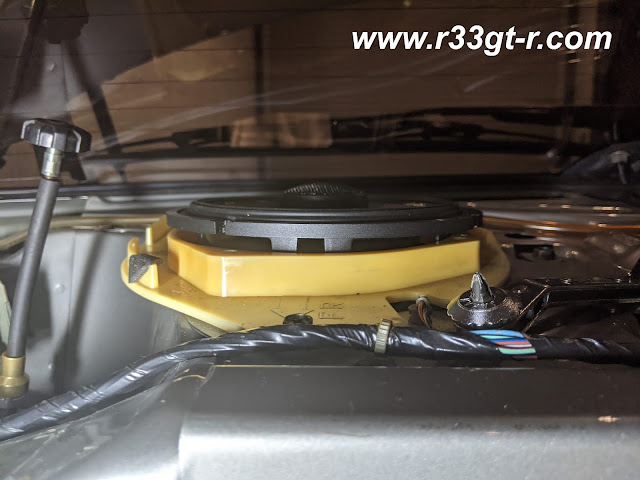 The reason is obvious when you take a look at the shape of the speakers from the side - they are both 6.5 inch in diameter but: 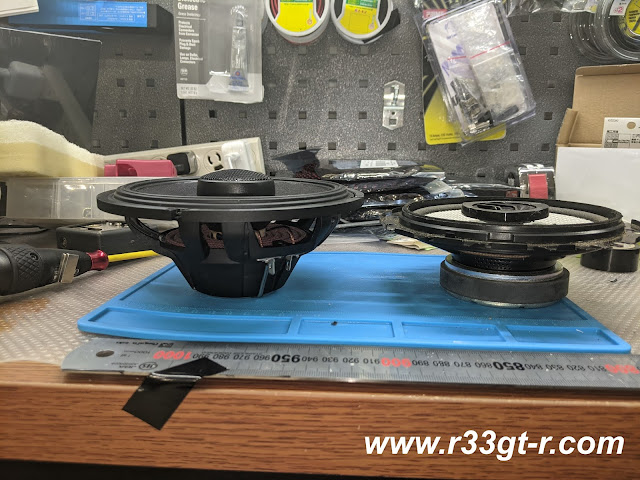 You can see how the basket of the Alpine (left) is much wider and taller, with the magnet actually incorporated into the basket body. The wide basket doesn't give enough clearance to allow the speaker to simply drop into the speaker hole. The Pioneer is a more traditional shape, with a minimal basket and larger magnet on the bottom.

Luckily I knew exactly what to do, which is to get some MDF spacers which would have a larger diameter cut out than the OEM plastic ones - and I went to the guy I had purchased the spaces for the front speakers many years again (from Yahoo Auctions). 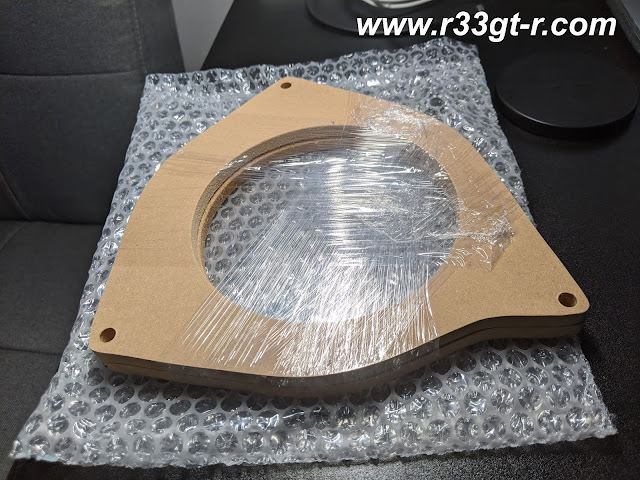 Of course I immediately painted these with some flat black lacquer paint to protect from moisture, and to ensure they blend in with the interior. 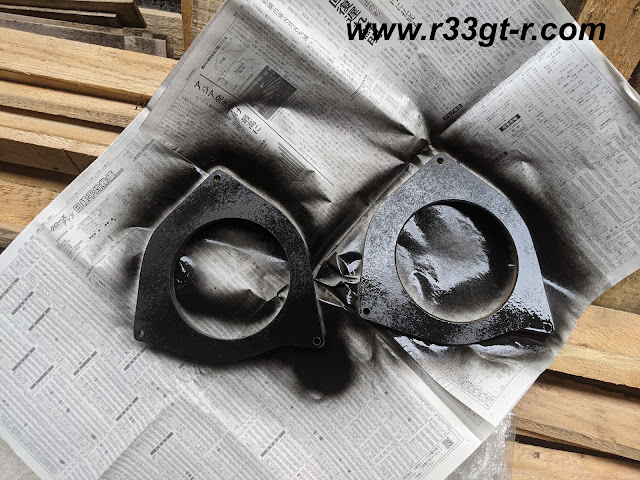 Test fitting it to make sure.

And here is where I found another problem - while these spacers DID fit properly, they still did not clear enough of the metal (pink arrow). However after fiddling around with the spacers, I hit upon a solution, which was to flip them over and use only the front bolt hole, while drilling out another hole on the opposite side (in mirrored location) below the elongated tip (green arrow below). 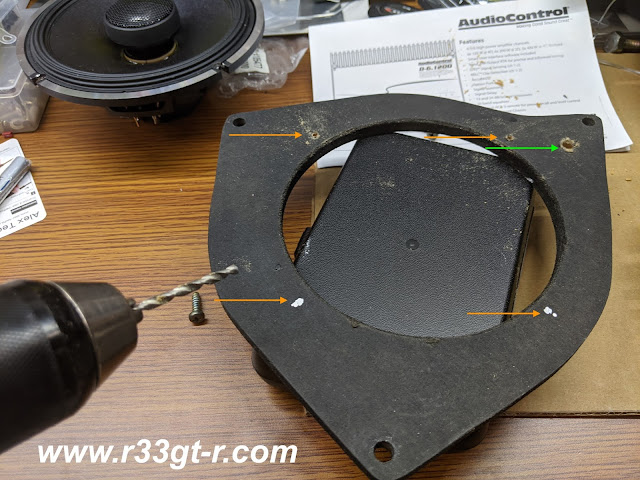 While I was doing this I measured and drilled out the holes (orange arrows above) to screw down the speakers:

So now it was time to install the speakers, but before that, I wanted to install some sound deadening and dampening to the rear deck. For that, the easiest solution was this door sound dampening kit from Audio Technica Japan. 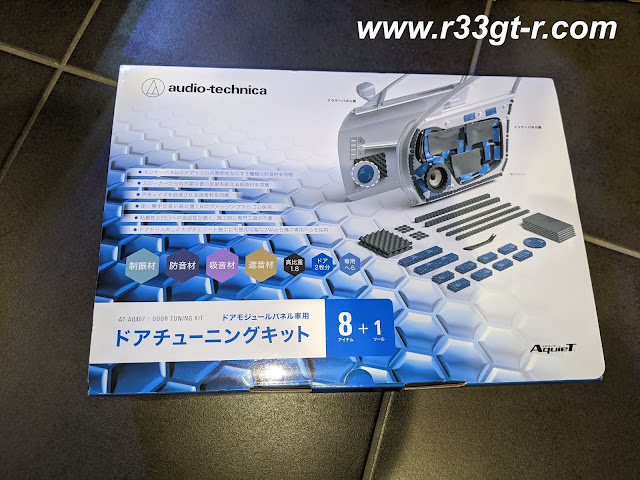 I had previously used a similar kit for the front doors way back when I first added sound deadening to my car (way before my misfortune with Worx). So I knew I was getting a good kit, and rather than buying parts separately a kit is always easier (plus I figured if I didn't use all the pieces I could add even more material to the doors).

Here is what the kit contained:

First, these foam items - here you can see the round "clip dampers" (designed to go around the clips used to connect door panels- to prevent squeaks); the thinner "sound proofing wave" on the left (designed to be applied to the door metal as an outline to the panel - to plug any gaps between the door frame and panel (and thus prevent further sound leakage) and the thicker "sound proofing wave" (designed to be applied around the speakers to direct sound up and out):

Here are some "vibration controllers" (small sizes for "point tuning")- to dampen vibrations: 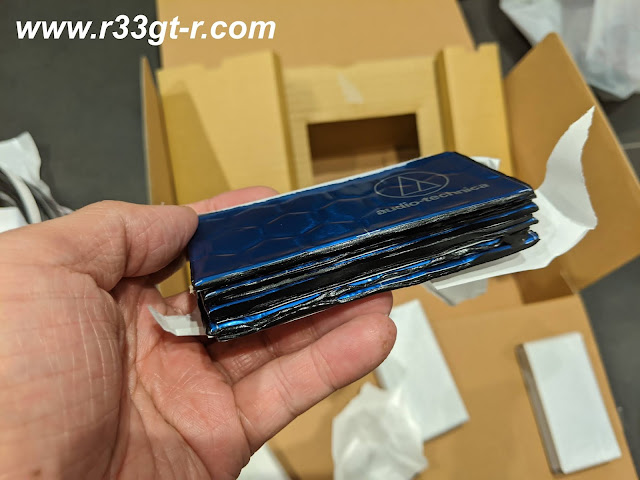 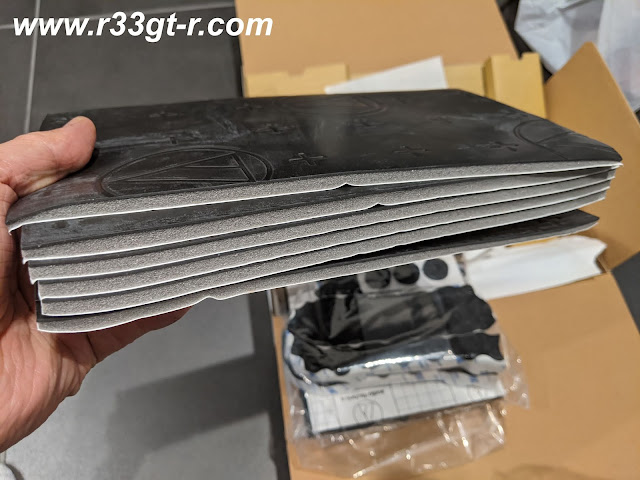 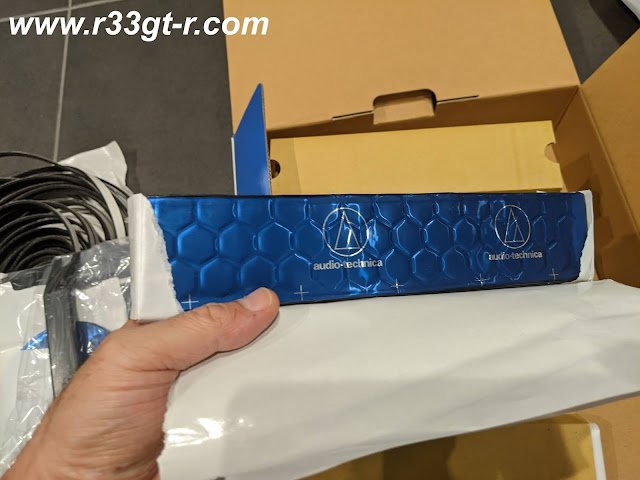 Application tool with clip remover on one end: 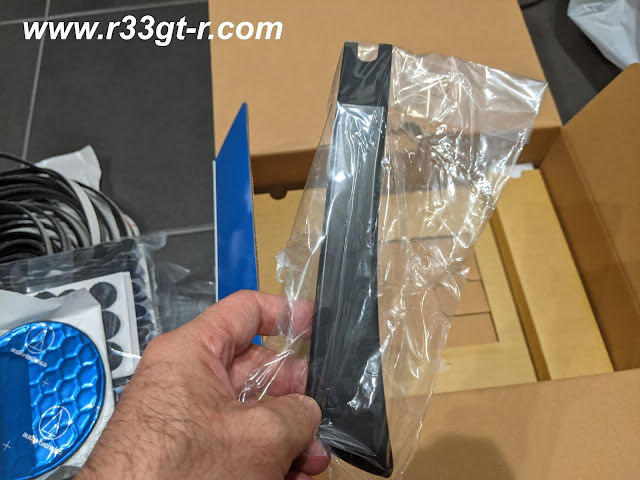 So the usual stuff, plus some stuff I hadn't used before (the "sound proofing wave" and the clip surrounds).

At the same time, the foam speaker gasketing tape had arrived, so I decided to apply that first. 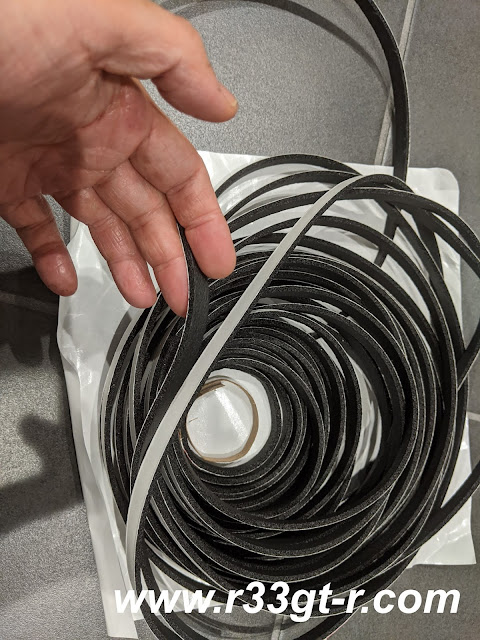 Pretty simple stuff, just cut to length and attach. Looks like Alpine expects its customers to do so, judging by the pattern on the underside of the lip of the speaker:

Just a few minutes per speaker and: 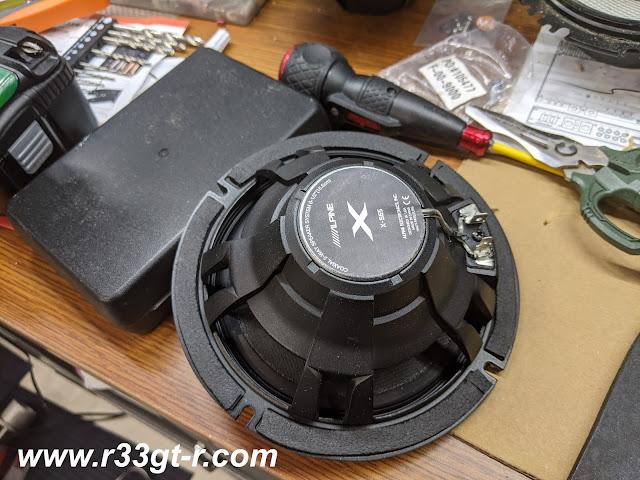 So this gave me reassurance of no rattles between the speakers and the spacers. But what about between these spacers and the rear deck itself?

Right before I started adding parts from the sound dampening kit, I wiped down the rear deck for dust and dirt (but it was actually really clean!) and first applied this gasketing tape to the outlines of the speaker holes (purple arrow below). As you can see I did not cover the entire area with the sound deadening material. I first laid out as much of the vibration reducing material ("vibration controllers") and then on top the "noise-less rug" sound insulation but made sure to leave space for the spacers to fit completely flat and snug on top of the gasketing tape.  I also got clever (I think) and added some of the vibration controllers and sound insulation material to the area next to and above the rear coilovers (green arrow): 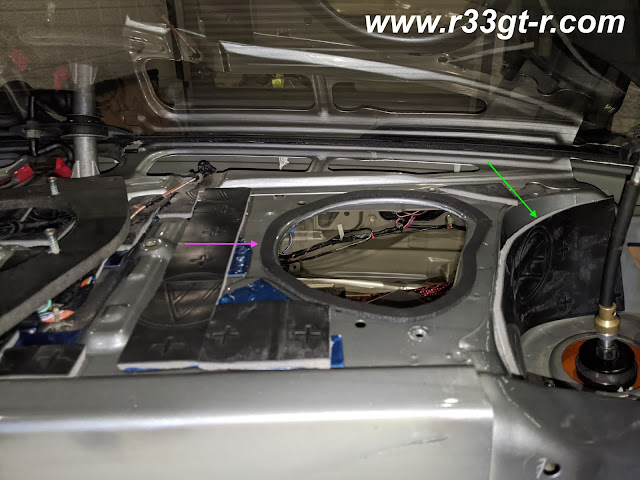 Eventually, the rear deck was sufficiently covered - given how loud the car is and how the rear board already has some factory insulation, the emphasis was on vibration reduction and patching up holes that lead into the trunk - to try to get better bass response from these speakers) and I had the spacers installed as well. After this I only had to drop in the speakers (note the red wiring - that's the 16 AWG speaker wires for the rear speakers): 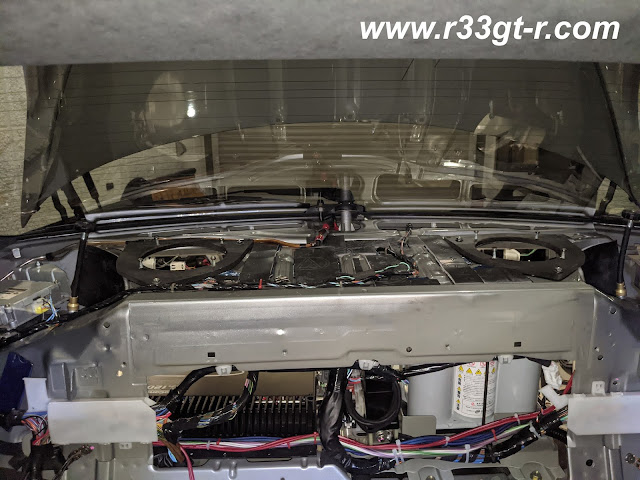 But before I did that, one more thing to do -  fix up the rear parcel shelf itself. First, I had to re-glue some of the insulation that was coming off. 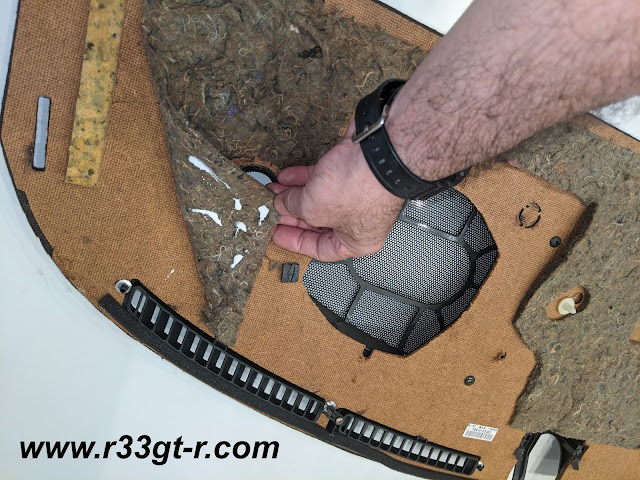 I let it dry overnight (and yes, see those two white clips in the middle - I DID apply the foam "clip damper" things to them during the install). 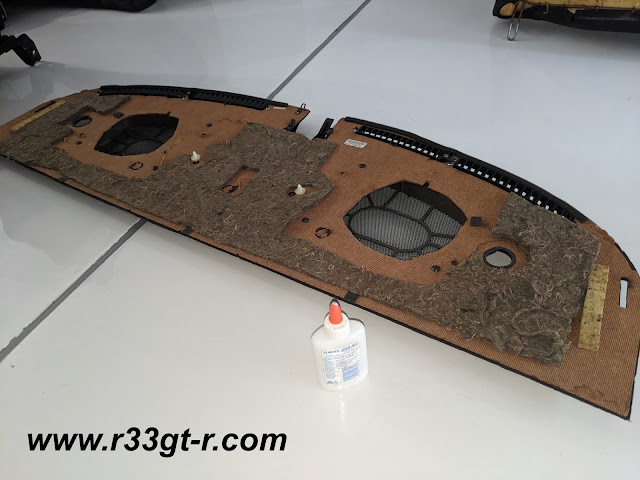 One more hurdle - turns out the OEM holes in the parcel shelf are too small for these larger Alpines (and how the speaker locations had also changed a bit as I shifted the spacers) so I had to widen them a bit - as you can see there was plenty left to cut out: 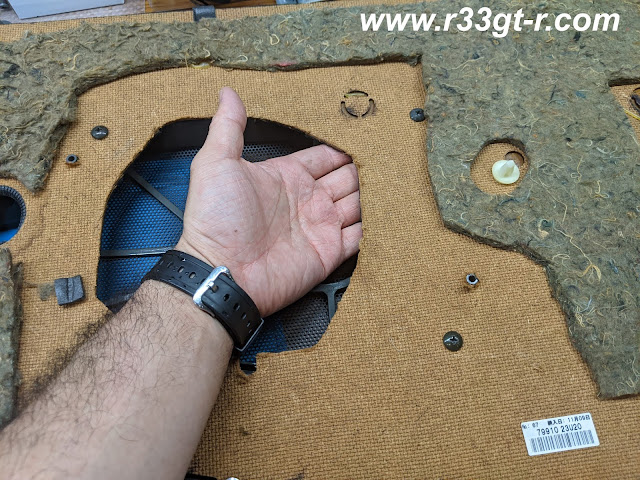 Using my jigsaw, I managed to cut cleanly cut out the extra space needed: 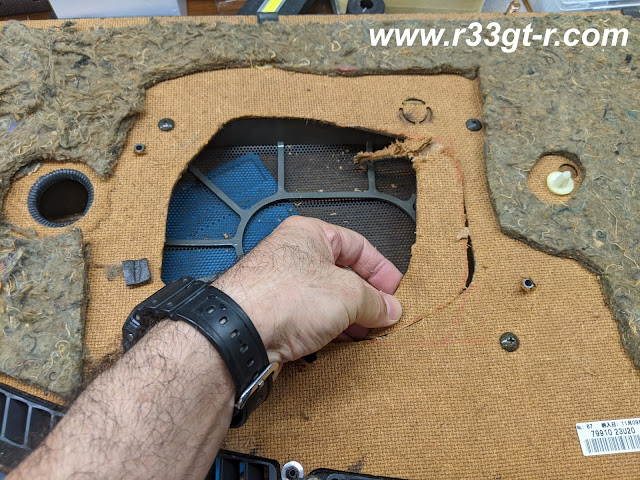 Finally, before re-installing the parcel board, I attached the speaker foam surrounds (pink arrow below): 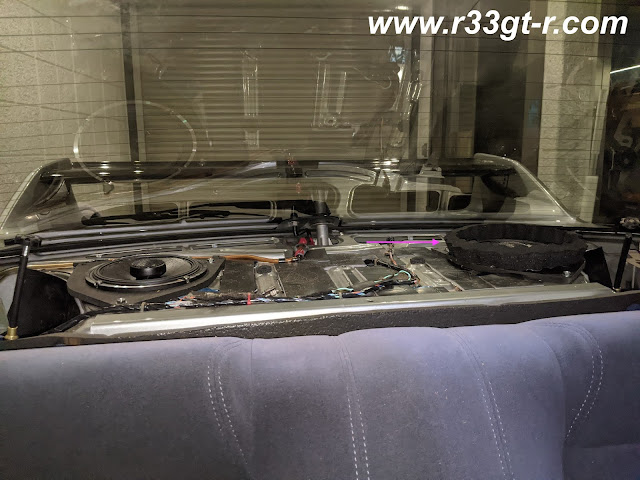 Meanwhile as I was doing this over the course of a few days the Alpine X-series component speakers had finally arrived... so in my next post I'll show the unboxing and then how I installed those speakers.

I love this Aki! If you search 5star audio on YouTube it’s a huge resource. They have a car talk audio q and a on Saturday they are in FL.

I love the steps you are talking. Didn’t want to say much but you cutting the parcel shelf for the Alpines means you are down for the sound!

You are doing it right G!

Actually yes I've been watching their videos - Dean and Fernando are the best!! And where I learned so much about how to DIY all this. Glad to see sharp minds think alike!! Thanks for the comment!