Recently, a fellow R33 GT-R owner messaged me on this blog about how he had successfully used a BNR34 part on his car. Murray (Follow him on IG: kaizen.r33) currently lives in Okinawa, Japan, so when I found myself there for a couple weeks of special work, it was natural that we would meet up in person just so I could check out his car (his daily!).

Once we met up, of course I had to check out in person what he had tried to explain to me via email and photos about his mod using the BNR34 rear strut tower board, which being two layered (vice the single layer BCNR33 piece) provides more rigidity to the rear of the car. 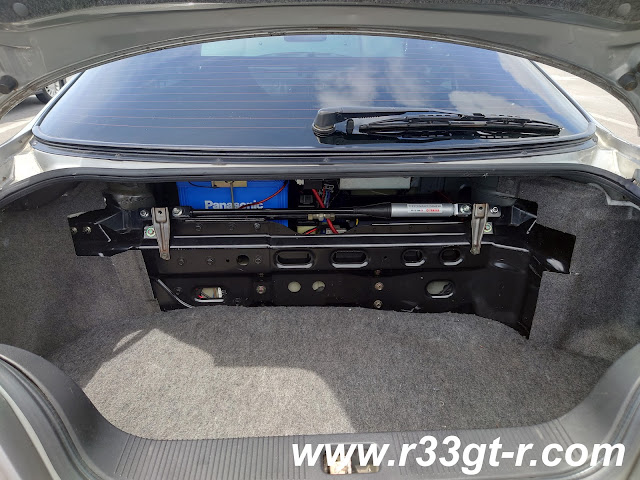 So I could tell immediately that this looked different from the usual 33 part.  First, the Nismo Performance Damper appears (and is) shorter, but that is because its mounting points are different - you can see in the next photo (kindly provided by Murray) that compares the 33 and 34 rear boards - the 33 is one piece so the rear strut bar (and thus the Nismo Damper) connects on top, while the mounting for the 34 strut bar (and thus Nismo Damper) is a separate piece that lies on top of and bolted underneath the rear board.  Murray told me that because of the different lengths he had to buy a new Nismo Damper for the rear. Because Nismo only sells in front/rear pairs, he sold his new 34 front one on Yahoo Auctions. 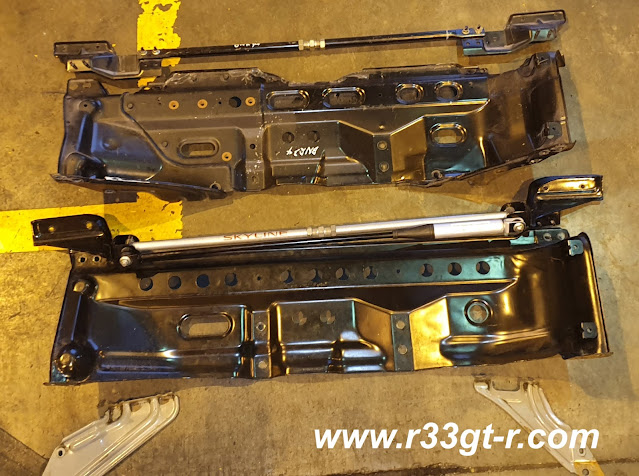 Additionally, Murray informed me that, compared to the 33 board, the 34 board has 4 extra recessed holes, probably M10x50mm in the standard 1.25 pitch. He says the Series 3/Kohki cars already have these holes drilled at the factory so he had no problems adding and tightening these extra bolts down. Otherwise, as I reported in the GT-R magazine article post, this part is a direct easy fit requiring no mods to either the car or the 34 board.

Murray reports he could immediately feel the difference - an increase in rear stability - and this makes sense as the 33 is longer than the 34 and thus I would suspect that an increase in rigidity here in this area would do wonders in how the car feels.  Certainly makes sense given how this 33 was used as the basis for improvements that would end up in the 34. Incidentally, I forgot to take photos, but Murray also has the S15 trunk bar installed as well, so the improvement I think might be noticeable in my car as well.

I am very, very tempted to do this mod! I will have to research the Damper issue- whether the change in structure is effective, etc. Ideally I want not to have to buy a new Nismo Damper...

But of course I had to check out the rest of the car.  I had already noticed that this car was running those beautiful Nismo semi-gloss LMGT4 wheels, and I could already spot some brake mods.

These are ACRE Dustless-Real pads and Dixcel FS 6 slot rotors. He has the 400R fender flares but told me that Nismo no longer offered the ones for the front. I will have to look into this, but meanwhile we discussed how the Nismo R35 brake package does wonders for the braking ability of the car.  I think if Murray ever takes his car to Fuji Speedway, he will realize that the OEM brakes are the weak point of the car. I did advise him to stay away from adaptor brackets made elsewhere, unless he can overcome the shortcomings I found with the set I sourced from the UK.

While still at the rear of the car, I noticed that Murray had also installed a BNR34 rear diffuser. But it looked different than mine. And it's not just the 400R rear bumper.

Turns out that Murray had the rear diffuser custom-made by CW-collective.  No photos from me as my knees were not cooperating that day (but check out Murray's IG), but I did notice how clean the exhaust cut-out was.  Murray did remark that compared to the OEM 34 version, he did not have a jack up point (so he has to use the arms), but otherwise the install was very clean.  And he even used the OEM 34 plastic fins, which is a smart move because they can get damaged when backing up (although I did not see any damage to the fins on his car).

One more interesting piece in the trunk area was this old-style Nismo badge that is no longer available.  I suspect that Murray and I may have been competing on Yahoo Auctions for the last few years over the same parts...

I also spotted this side turn signal that Murray says came with the car. Yes I have advised him to get it changed out for a more inconspicuous part. 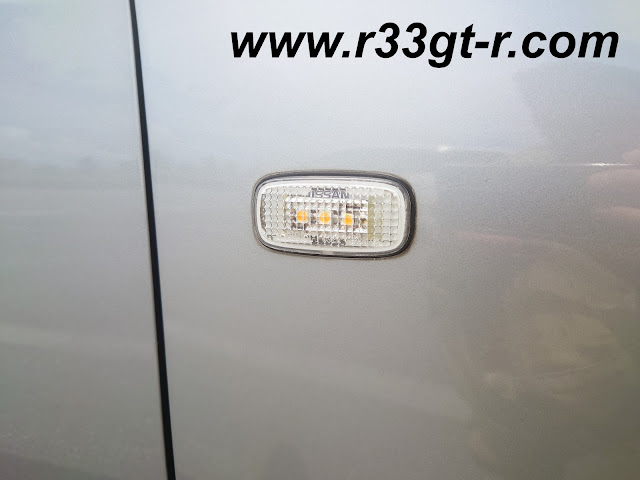 Anyway a well put together and a very clean look that works! (despite the shaved off trunk lock - done by the prior owner of the car).

Ok so let's check what's under the hood(bonnet!). 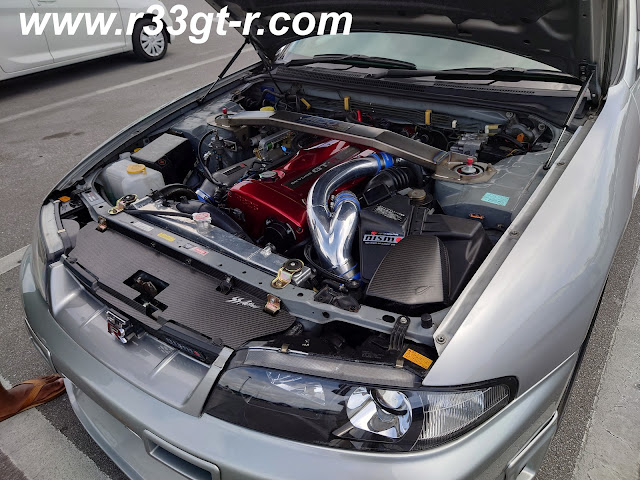 Hard to tell at this angle, but Murray reports the new HKS GTIII-2530s work really well. I also spotted the carbon fiber Nismo Omori Factory original air intake - great minds think alike?  Also hard to tell at this angle is the deletion of the OEM CAS for a more modern trigger kit, with the engine now controlled by a Haltech Elite 2500.  And yes that is a MASSIVE front strut tower bar! 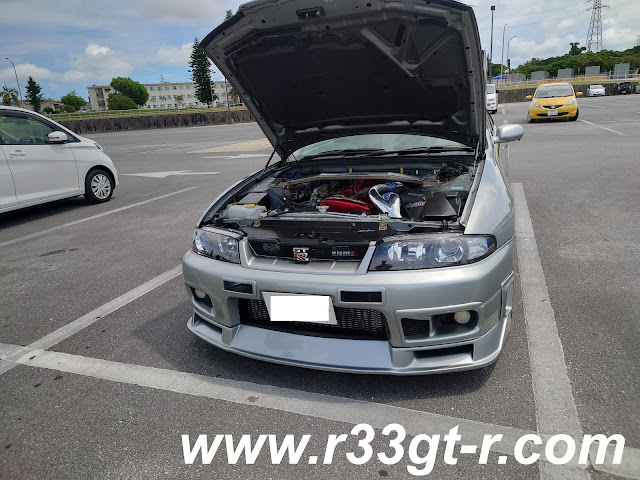 I also noted that he was running a non-standard front lip. Murray reminded me that this was also a Nismo piece, I guess my focus has been on other Nismo parts as it didn't register with me when he told me!
From what else I can recall, Murray told me that he had gotten his Xenons redone with a much brighter bulb set-up, retrofitted with G5-BRT projectors from Lightwerkz Global. Additionally, he told me he is running a very interesting cam set-up - 290 on both intake and exhaust with 10.8mm clearance.  Sounds awesome, but he admits that the decrease in engine pressure was causing him some brake pressure issues; hopefully the Auto Select Large Capacity Brake Master Cylinder he is getting installed soon will mitigate the issue.
But wait - what about the interior? Hold on as this was, to me, the highlight of the tour. 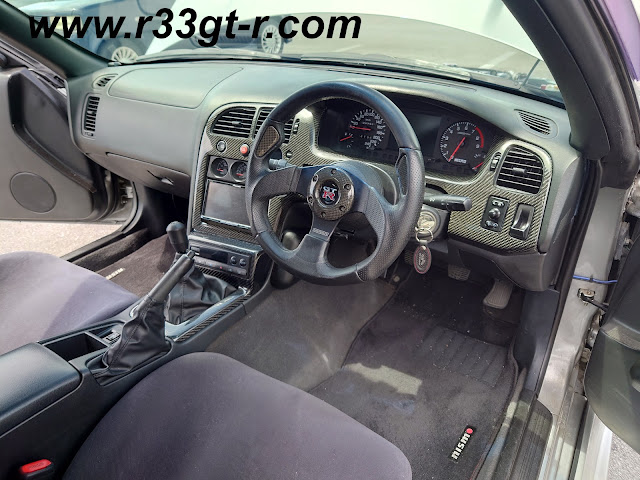 First, I noticed the real carbon treatment on the dash surround. Not my taste as I like matte and not gloss but it worked well here actually. Then I noticed the Garage Yoshida sourced HVAC relocation kit, and the 2DIN screen.  Yep, been there, done that, except of course not Garage Yoshida.
But of course, I then saw that the instrument cluster is the old Nismo option that has the center screen. Murray told me he sadly does not have the Epson EJ1 computer module that came with it - he is on the hunt for it.
I would argue however that he does NOT need it. Yeah I know not OEM, but his current execution is WAY better:

And if that wasn't impressive enough, once past the welcome screen: 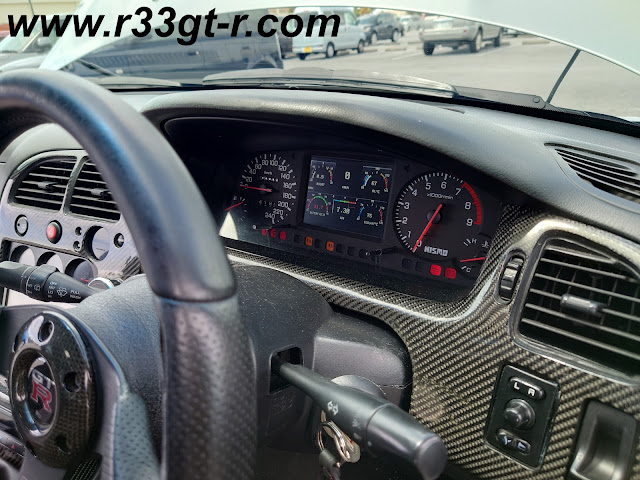 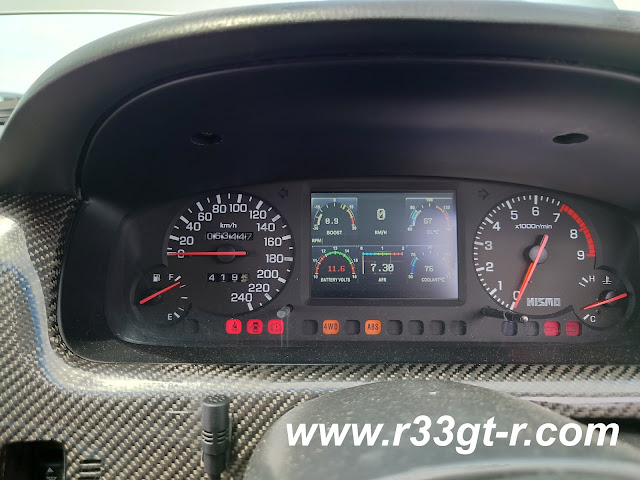 Murray says he was inspired by the R35's graphics when he configured this set up! I am very, very impressed with this!
I really think this is way better than the original: 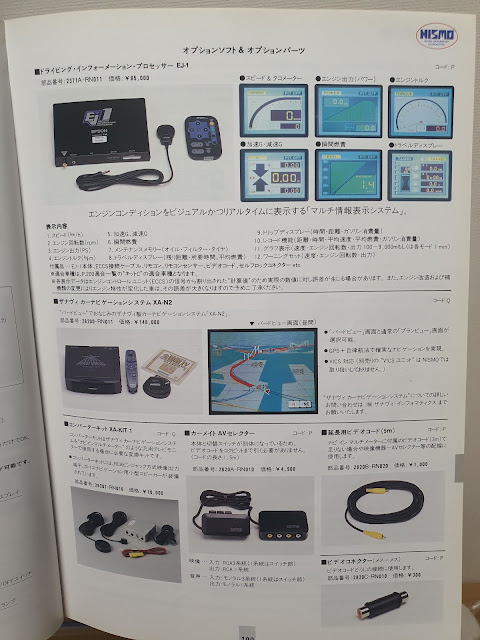 I mean if you are going to Resto-mod... let's make it modern, right!?
But this wasn't his only interior mod. Check out his camera mount. 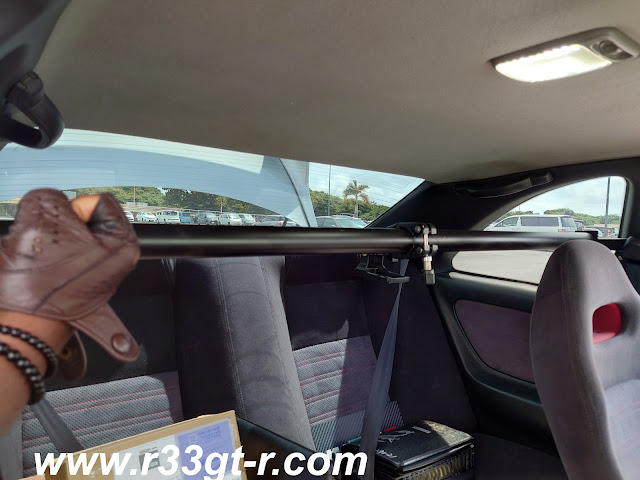 We were joking that maybe this gave some more body rigidity as well. Looking forward to whatever video Murray takes from this!
Lastly - and this is something new for me - as I learned something - is this OEM R33 cup holder.
Ok here is a better shot of the cupholder, without the carbon fiber insert: 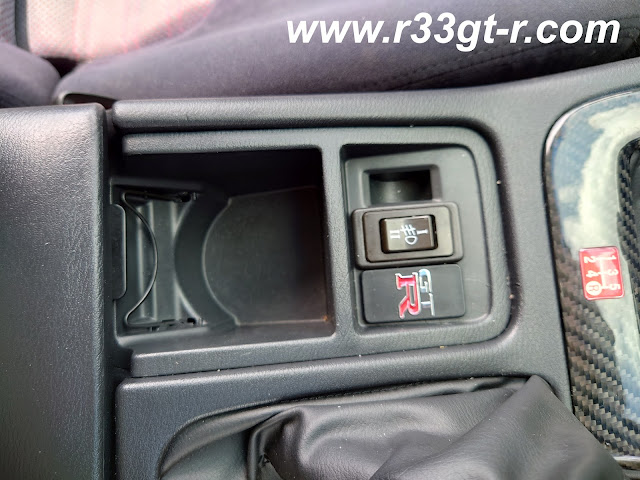 So it turns out that the R33 GTST had these cupholders.  Unfortunately for the GT-R, the G-sensor needed for the ATTESA system that is mounted underneath this space prevents this part from fitting, but if you have already replaced the old analog G-sensor for a digital one from Do-Luck or Midori Seibi, then this mod is possible. 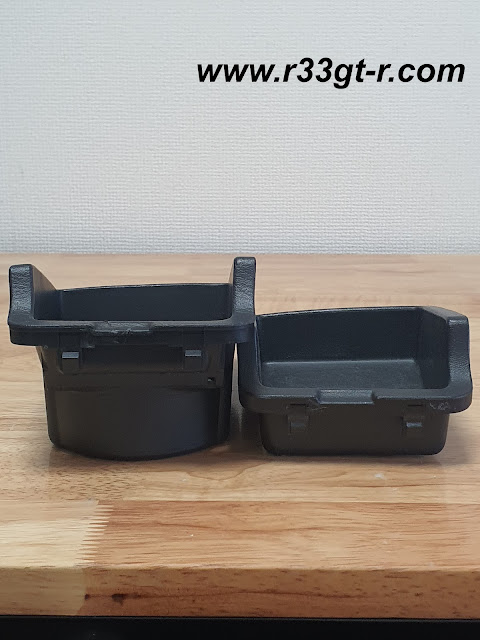 So this is another Murray mod that I may have to try out! Not that I EVER drink or eat in my car, but maybe if I get this part I will allow a water bottle in the car... lol.
Anyway, my thanks to Murray for taking time out of his day to swing by and let me check out his car.  I'll close this post with a fantastic photo he took... and I do hope we will be able to meet up again soon! 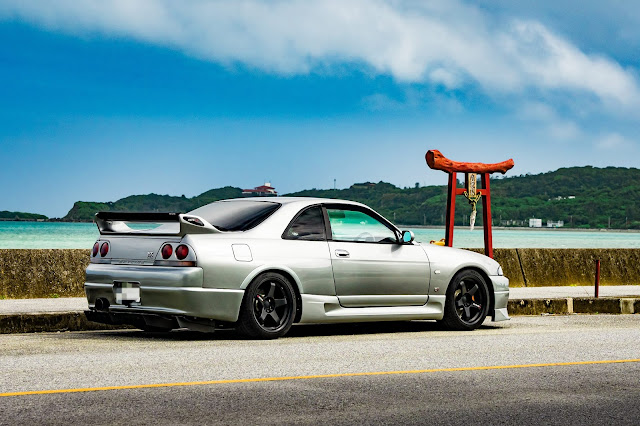 Those pads are absolutely not recommended for use even in hard street driving. The stock R33 Brembos are dinky little things, even a 370Z uses 355mm rotors and needs high temperature brake pads and fluid to not overheat the brakes in track use. The 370Z Nismo rather famously boiled the brake fluid and melted the pads in a Car and Driver track test and ended up crashing into a wall: https://www.caranddriver.com/features/a15129918/z-meets-wall-we-investigate-why-the-nismo-zs-brakes-failed-at-lightning-lap/

I use MX72 Plus pads for now in my stock R33 Brembos and that's probably the bare minimum I would recommend as the brakes are so marginal. Those pads are supposedly ok up to 750C, the low dust pads you mentioned are only rated to 500C. Flush well with fresh RBF660 or SRF if you intend to use the brakes seriously and not just commuting.

Very interesting, I did not know that - and would explain why Murray was not happy with his brake performance, maybe? And yes the OEM Brembos are definitely the weak point of the car... I have used the RBF600 fluid as well as PFC race, and those survived only for a few laps at Fuji...

Definitely on a track I would use a pad more like Endless CCRg or ME20. You would want something that can survive at very high pad temperatures. The big advantage of something like the R35 brakes you have retrofitted is that you can get away with considerably more street-friendly pads on the track like MX72 Plus instead of swapping for every track day. Track pads are awful on the street. They don't stop the car due to a very low friction coefficient at low temp, they wear out rotors at a tremendous rate generating a lot of corrosive brake dust, and they squeal like something is broken even when warmed up.

Definitely a good plan to stick with the Haltech display. I have the Epson controller with mine, but a more modern and informative display would be much better. Also once the display inevitably dies, you can get a much better display that fits into the slot. Nice rare piece though

The MX72 pads are great i run those as well!