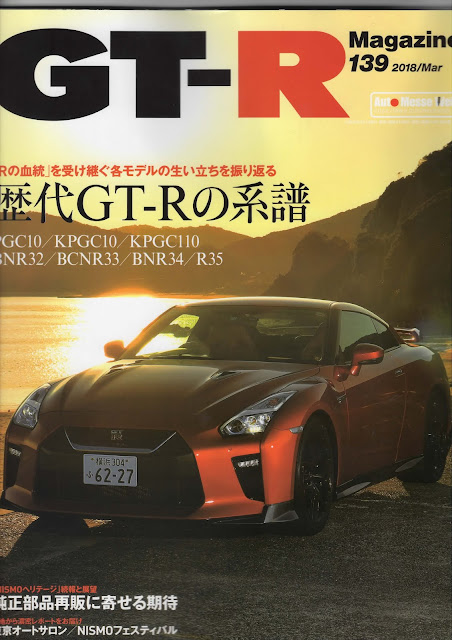 ...had an interesting article featuring how a Japanese tuning shop, Garage Yoshida, had developed a menu of BNR34 bolt on parts in an effort to improve the BCNR33's body rigidity, I went out and bought this issue in the hopes that the content would be worth sharing here.  I was pleasantly surprised! 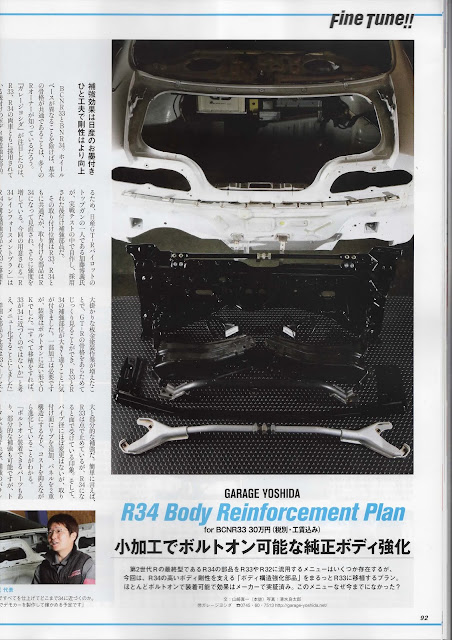 As I had learned in my research on the objective differences between the BCNR33 and the BNR34, Nissan put lots of effort into improving body rigidity (along with aerodynamics, of course) in the BNR34.  This month's article provided even more insight, as follows.

1) The BCNR33 and the BNR34 are, save for the extended chassis, basically the same mechanically.  Nissan developed bolt on parts to improve body rigidity of the BCNR33 over the base R33 chassis based on the input of Nissan's top test driver, Hiroyoshi Kato, during the development of the BCNR33.  It turns out that the locations of these bolt on parts are essentially the same for the BCNR33 and the BNR34, and that for the BNR34, these parts were revamped for even better body rigidity.  So, Garage Yoshida decided to offer an "R34 Body Reinforcement Plan."

2)  Some of the parts may require a bit of extra work to fit.  The basic difference in parts are increases in the size/area of the part bit that is attached to the body, and reinforcement of the part itself. For example the diameter of a tube may be similar but the BNR34 part has extra ribbing on the base, or the base has dual layers, in other words changes that are cheap (for Nissan) to implement.

3) As these parts were developed by Nissan, unlike some aftermarket parts from various tuners, you can be assured that the parts were subjected to R&D and thoroughly tested.

So, what are these parts? 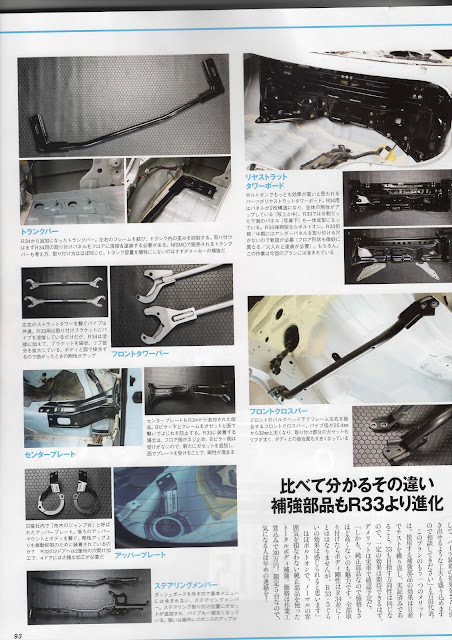 As you can see from above (and my summary below):
Starting from, left top to bottom:
A) Trunk Bar.  I installed the S15 trunk bar on my car, but the 34 one is installed differently. First, the trunk floor needs to be prepped as there is a base that needs to be welded to the floor and then painted. The trunk bar attaches to that base.

B) Front Tower Bar.  I have the NISMO titanium one, but when comparing the OEM BCNR33 and BNR34 front tower bars, you can see that, although the diameter of the bar itself is the same, again the base mount area is different. For the R33, the base bracket is simply welded on, but in the 34, in addition to the welding, the shape of this bracket is different and has ribs.

C) Center Plate.  These center plates are attached at the base of the B pillar area for additional rigidity.  For installation in the 33, the floor side is bolted on, but the pillar side apparently requires a gusset, to which the center plate can be attached. I will have to look into this, although after having the Do-Luck Floor Support Bar bracing installed I am not sure there is much to be gained in my car.

D) Upper Plate.  These connect the body and the rear upper (coilover) mount areas, resulting not in body rigidity but more vibration suppression.  All it takes to install in the 2 door coupes are drilling 2 extra holes.  I am DEFINITELY going to install these, someday.

E) Steering Member.  The BNR34 version has larger diameter piping in some areas and gussets added to the attachment points, presumably to increase steering response. However this requires removal of the dashboard and so for me, having just had my dashboard replaced, a lost opportunity. Although most people who have driven my car have praised the steering so not too worried...

Right top - F) Rear Strut Tower Board.  This is the bolt on part that results in the biggest improvement. The BNR34 board is dual layered, and so its overall rigidity has increased.  For the BCNR33, the lower part of the panel was separate, and in the BNR34 this section has become unified with the main part.  For Series 3 kohki cars, this BNR34 part is an easy bolt on, but for Series 1 zenki and 2 chuki cars, some work is required as the floor shape is slightly different and so some heating and painting are needed.  Another part I definitely want to get installed.

Right middle - G) Front Cross Bar.  The BCNR33 part has a diameter of  25.4mm, while the BNR34 part is 32mm. Additionally, the gusset and ribs are thicker, with more surface area attaching to the body.  I have installed the NISMO Underfloor Front Brace, which replaces this OEM part for both the 33 and 34. I will have to check to see if the 33 and 34 NISMO parts are the same (the parts number is different but I don't know if the dimensions are) but I doubt I will change as the NISMO part seems to be designed to improve even the OEM 34 part, and so if the 33 NISMO part is shaped the same, then I suspect the NISMO part has better results than the OEM 34 part.

So friends, this gives me some other stuff to think about and possibly install this year, in addition to my continuing interior modernization saga! Comments always welcome and thanks for reading!

UPDATE: I just called Nissan Prince Tokyo Motorsports, and this is what they told me:

That Nissan Prince Tokyo Motorsports is where GT-R Magazine shote the photos used in the article, using the magazine's own R33 GT-R. AND, truth be told, the usage of some of those parts are questionable in the opinion of the top mechanic there.

For example, the Rear Strut Tower Board - even the the article claims it is "bolt-on" for Series 3 kohki R33 GT-R, the mechanic is claiming that isn't exactly true.  Some minor mods are probably needed to make it work properly.

The Center Plate, as well - see how, in the photo, the right side of the piece rises up towards the B pillar? This means that the rear seat cushion now won't lay flat, as you will have to literally cut out a section of the rear seat to make it fit properly again.

Of the 3 parts I was interested in (the aforementioned 2 plus the Upper Plate), I would probably only install only the Upper Plates.  Except that since it's quite tight back there and holes need to be drilled, I would likely do so only in the event I have to replace the rear window.  Luckily, I was told there are plenty of these Upper Plate pieces in stock, AND they only cost 960 yen each.

So, I guess this won't be happening anytime soon... On the other hand, looks like I've got the other areas covered already. So, time to focus on other stuff...
Posted by Aki at 3:45 PM

I suspect the US demand for R33s will be greater than R34s even though prices of R34s will be higher. At least, that's what Sean Morris seems to believe.

Working on it! Too cold at the moment to stay outside too long...

I can 100% confirm that the trunk tower board fits a kohki R33. There are just a few extra bolts required

Thanks Murray! Something I can do this year!

Thanks buddy - any drilling required? Can you educate me on what you mean by the extra bolts? Thanks (and thanks for being a fan, lol!)!!!

Incredibly sorry for the late reply.

There is no drilling required for the Kokhi version, but loosening of the nuts that connect the plate to the chassis and the R34 strut bar may be necessary to slightly adjust the fitment to line everything up perfectly.

As for the bolts, all but 4 from the BCNR33 plate are compatible with the R34. If the used plate you purchased does not include its own bolts, then you will need to source custom replacements for the bottom 4 holes that allow the bolts to be tightened horizontally (close to the position of the three bolts tightened vertically on each side. The holes are recessed quite a bit to allow battery tray clearance. I took one of the bolts out and it measures at M10 x 50mm. Hope this helps. Can send pictures of needed!

No worries! I really appreciate the response and the details. If this mod is something I can do myself, of course I am interested - would you mind sending some photos over as offered? aitoh at hotmail.com - thank you in advance!!

I definitely believe this is something you can do on your own. I will send an email to you shortly!

Hello, I’m following your work i this area. You said the r34 trunk reinforcement board fits bcnr33, do you know if the bcnr33 will fit a 34? Are the actual mounting points the same?

We can assume the shape is the same but the 34 seems to have more mounting points, which means that your 34 would lose rigidity if you use the 33 one.

Thank you, I plan to use one in a sedan, the sedan mounting points cater for a Bnr34 one, so I plan to try with a BCNR33 one as 34 ones are scarce.