Sunday before Trackday at Fuji on Tuesday

So this Tuesday is a national holiday - and luckily for me, the next SSCT trackday at Fuji Speedway.

I like to use these trackdays as excuses to find and install new performance parts for my car, and this time was no exception. Lately as you may have noticed I've been doing much more to my car myself - but due to some time issues, I decided to pop into Nissan Shinagawa Motorsports and let them do the hard work.

So here is my car at the dealer. At DCD's suggestion, I am experimenting with my Nikon, hence the slightly underexposed hue - but I think it looks pretty good? Not DCD quality, but heck... 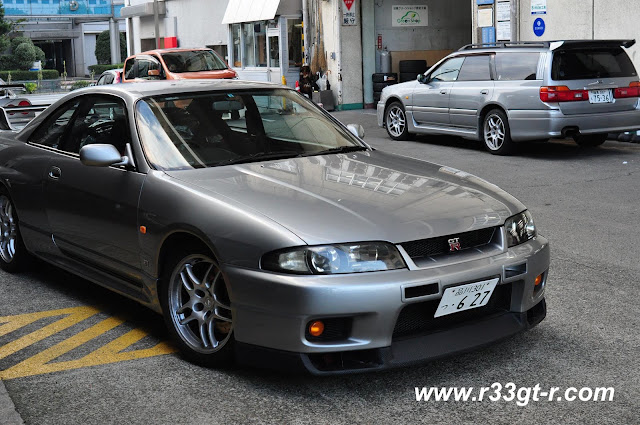 Speaking of DCD, I had sent him via iPhone a photo of the new Nissan Fuga Hybrid that was parked there and I spotted while I was waiting - and it turned out he was in the area with this thing - and he kindly dropped by for a chat and quick drive: 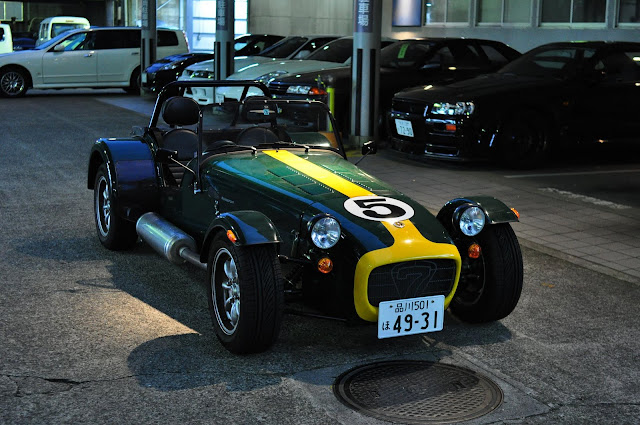 Meanwhile, they had begun working on my car - taking off the standard tower bar: 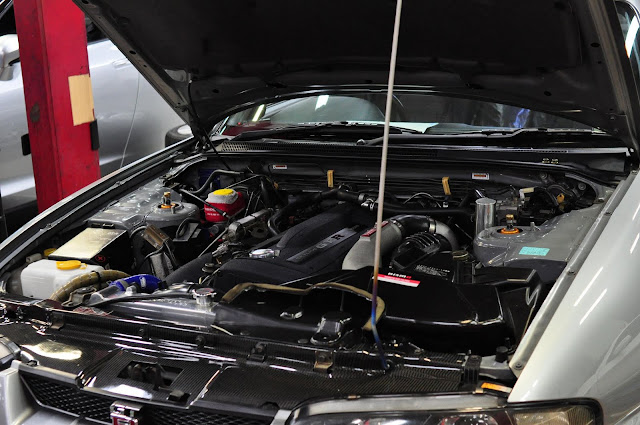 And replacing it with this! 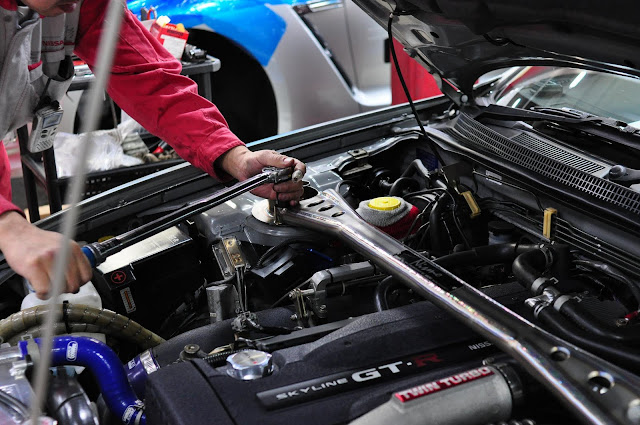 Yes folks, a Nismo Titanium towerbar! My friend in Europe found it - it had some paint flaking off from the label, but nothing a quick spray job couldn't fix (it's not perfect, but will do for now until I figure out how to fix it properly...) And suffice to say I didn't have to pay a ridiculous price for it. Speaking of which, there was an R34 GTR with the new Oomori Factory Titanium Brace... nice, but too expensive. Plus, it is so wide that components such as the Nismo oil separator have to be moved around so the thing can fit. NO thanks, I'll stick with this one, and personally, I think it looks better too! (DCD agreed).

Meanwhile - the other part I had installed were the front and rear Nismo Performance Dampers (developed by Yamaha).

The front one attaches here at the tow hook: 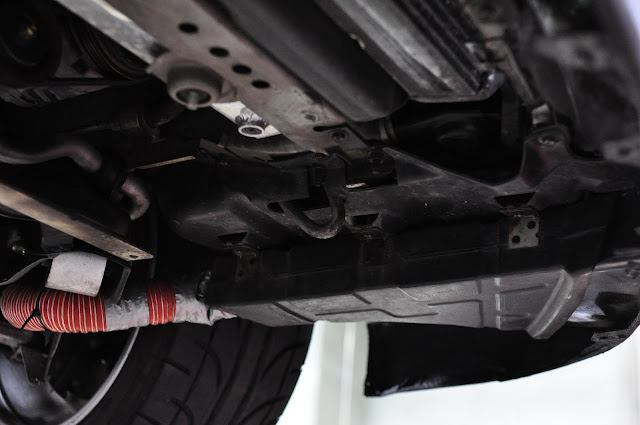 Which mean removal of the HKS Kansai tow hook extender, unfortunately. So now, I have to figure out what kind of tow hook to get...

In another post, I will show the installation in the back (forgot to take a photo today). Meanwhile, here is how it looks in the front: 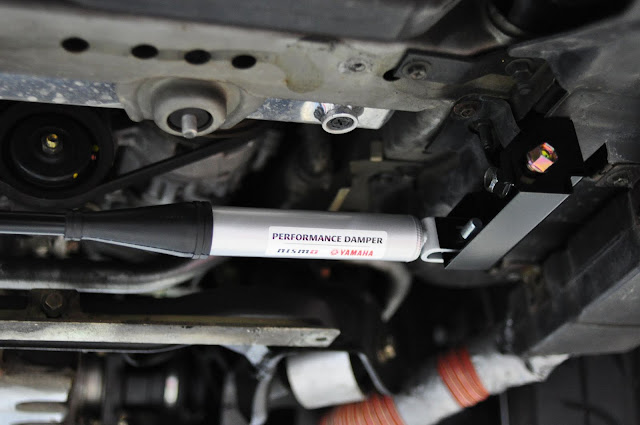 Problem of course is the HKS Kansai carbon undertray - which has a hump up towards the oil pan right where the Performance Damper lies...which meant some cutting was needed. Here is Motorsport Division's Sugimoto-san using an air saw and cutting into the diffuser (note the poor quality fiberglass patch I did...). The banged up nature of the diffuser meant, I really didn't care if they went ahead and made modifications to the diffuser. In fact, if I ever get another one, I'll get one with a flat bottom, that will avoid having to make any cuts. 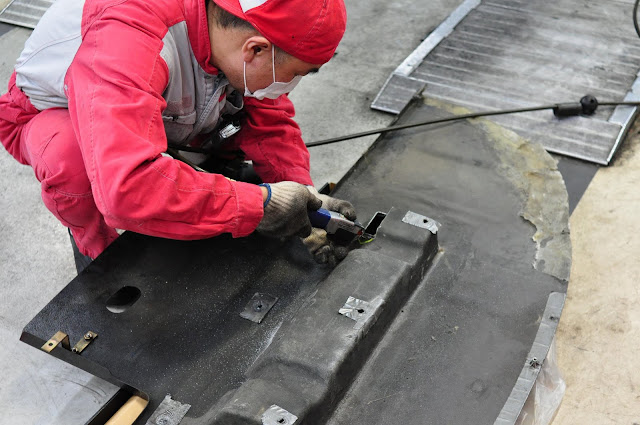 After several tries, finally got enough removed, ending up with this on the left side: 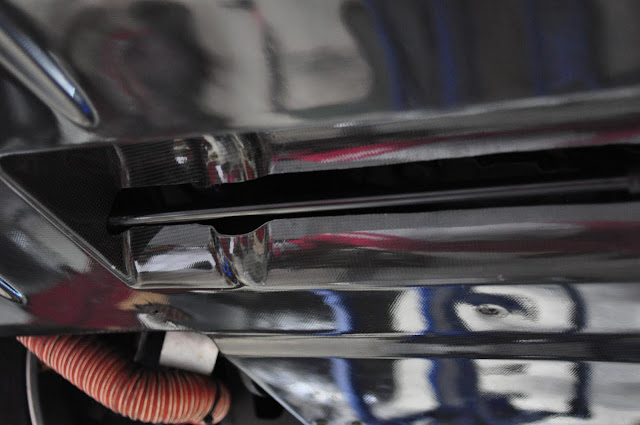 And this on the right side; 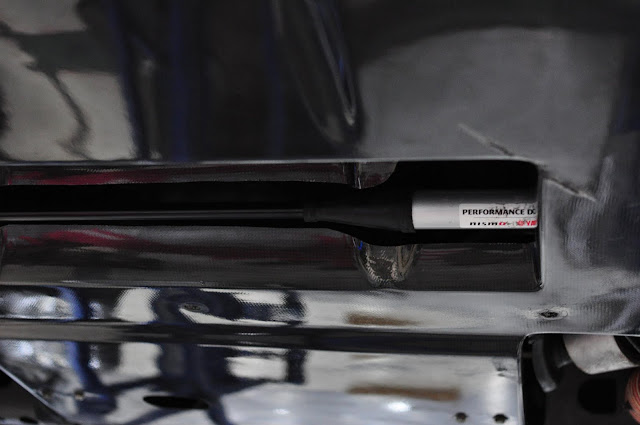 Now, I had heard how these dampers worked, in theory. And Koyama-san at Nissan told me to expect the car to feel somewhere "between an R34 and R35" in terms of rigidity and steering response. Yeah right! Whatever...

But when I got in the car and begain driving home - guess what, he was right! Absolutely transformed the car, I could not believe how solid and smooth the car felt. Made the car much easier to drive fast...incredible.

Here is Nismo's explanation as to how they work:
http://www.nismo.co.jp/en/products/competition/lb/performance.html
"Even if the car body is reinforced and made more rigid, road surface input through the tires and load shifts during cornering make the entire body act like a spring, causing the occurrence of micro vibrations. The performance damper acts to control the transmission of micro vibrations to the body. During circuit driving, micro vibrations from the car body are transmitted through the steering system to the driver, resulting too often in unnecessary steering corrections. With the performance damper installed, however these micro vibrations are eliminated and excessive steering wheel handling is no longer needed, resulting in more stable handling. Also, in normal driving, the micro vibrations are eliminated, as well providing a much more enjoyable and comfortable ride."

So I think body rigidity-wise, the only thing left for me to do would be spot weld -which I'm not really interested in doing - and maybe finding other brace pieces that actually work. (i.e. Nagisa auto brace...)
http://www.nagisa-auto.com/products/gacchiri/index.html


After dinner, I went out to the garage and changed out the radials for S-tires. I am hoping there is no rain on Tuesday. While I was at it, I also used some 3M Din-oc carbon-look material and some duct tape and sealed off the holes in the diffuser - I just don't think wind getting in there at 270kph is a good thing!


I also took off the carbon fiber Garage Defend panel and replaced it with my ram-air modified aluminum Greddy one. Also took out the spare tire, etc. I think I am pretty much ready to go...

Speaking of which, adding ram-air to the Garage Defend panel is going to be a project for me this winter, as well as some other minor tweaks I have planned. Stay tuned!
Posted by Aki at 1:18 AM

Aki, I know it's been a while since this post, but do you still believe the performance damper ended up being a worthwhile investment? I'm looking to purchasing a set of my own but don't see any other reviews aside from yours and a forum thread you provided input for. Thanks!

This is a mod I would do at the very last as part of a suspension redo. In other words, do the links, coilovers, bushes... and then if you have money left over, these. These performance dampers are a refinement piece, not something that is going to drastically change the car's handling or ride.

That being said, I would definitely recommend these to anyone, if they already have their suspension sorted AND they are looking to make their car a bit more refined. In fact I added the TRD equivalent part (made again by Yamaha) to my Lexus IS-F because I was so impressed with how they worked on the GT-R. And I've since learned that many OEMs make these dampers standard equipment on many of their more expensive cars.