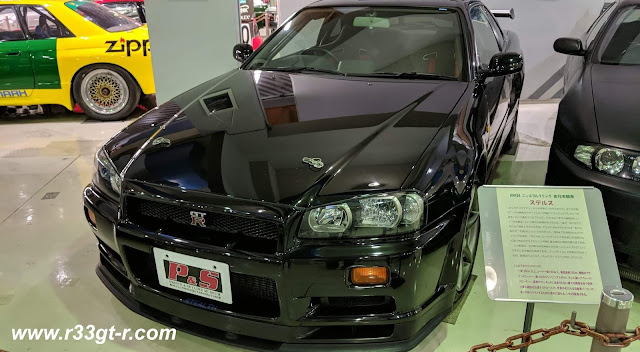 Check in again soon, I have a few dozen photos of the rest of the cars in the museum I will be uploading very soon!
Posted by Aki at 9:38 PM

I sent you a message on IG, I saw your car at Omori. Check it out when you have the chance.

Very cool once again. Shame about the poor jacking, seems like this is a very common issue with unibody cars.

This is the sort of engineering prototype I'm used to seeing to be honest. Rough around the edges, clearly not ready for mass production but a critical proof of concept.

I wonder if anyone has tried to replicate the R34 front diffuser but for the R33. Most of the diffusers out there seem to be out of production these days.

A lot of the brochure's dont load anymore on your links, on the right side of your website.

Are you able to upload the brochure's please?

or can you post a link to a shared folder?

or I'll do it for you if and share with everyone?

Kevin and Anon, thanks for the comments.

Jason - which ones? They seem to load normally for me?

Another stellar post with some really interesting information and rarely seen images from the past.

You asked about the sticker on the underside of the front diffuser.
I copied it from your site, pasted it into PowerPoint, then cropped it and stretched it vertically. (In case you want to try it yourself).

I reads 'Team Four Legs'. I have no idea what this means though. Perhaps something Japan specific circa 1997.

PS - Jason, viewing the site in Internet Explorer will show you the brochures down the side. I have the same issue of not seeing them in Firefox.

I have no idea what Team Four Legs could possibly be. But as you know, the Japanese can be very weird, and/or it's one of those Japanese English (japlish) terms that had some meaning back then...