So last Monday was Marine Day, a national holiday here in Japan, and it made for a nice 3 day weekend.  While many people take literal advantage of this day and go to the beach or participate in other water/ocean activities on this day - I decided instead to fix a couple of minor issues on my car - those who know me know that no issue is too small for me to ignore - the big ones I might have to pay to get fixed, but the smaller stuff I can do at home. Just need to find the time to do so.

One thing that has been annoying me is the complete failure of the new rear view mirror that I installed a few months ago.  My thinking was, an Android powered mirror with the possibility of using all of those apps, including Google Maps, plus Bluetooth to connect to my phone, and a front facing camera to record in front, coupled with a back-up camera, was an all-in-one solution that could help modernize my car.

After installing it and using it, my conclusion is, I was wrong. Anyone tempted to use one of these mirrors, please be aware of the following.

First, the Android system (8.1) is very slow. Very frustrating. And somewhat disconcerting, since the mirror powers up slowly so you have to wait. Second, these mirrors with the built in drive recorders/dash cams are designed for left hand drive vehicles - in other words when I adjust the mirror from the right side driver's side so I can see back, the camera, which is adjustable side-to-side, does not have enough sweep to be able to fully to aim straight to the front (less side adjustment is needed if the mirror is adjusted for drivers on the left). Third, the supplied rear camera failed. (Although later I found out that it was not the camera itself).  Fourth, when you turn off the car, the mirror powers down very loudly with its electronic melody of sorts. But after a 5-10 second delay. So a bit jarring.

So, I decided to go back to basics.  Not the OEM mirror, as I still wanted modern functionality but without the drawbacks of the Android one. After some searching, I found a modern, OEM-type windshield mounted mirror with dual 4.3 inch LED screens, allowing for 2 channels of video input each for a total of 4 video inputs! 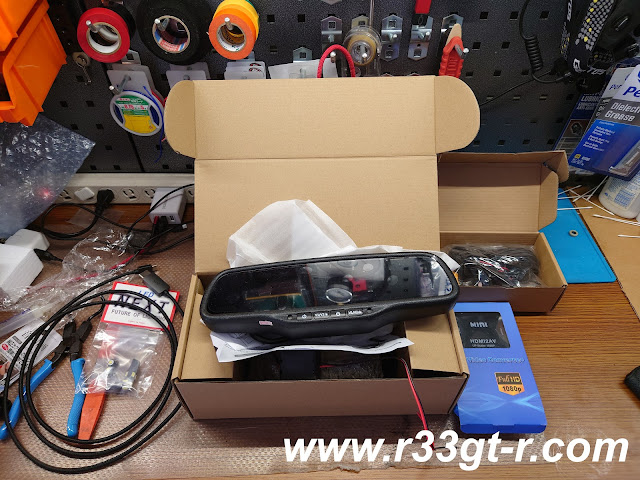 Here it is, completely unboxed. A bit overwhelming (below) maybe but notice that there are two trigger wires, meaning that if the other video input is being used (or the video is off) a trigger will cause that video feed to be shown as priority.  Perfect for a back up camera, right?  Incidentally as seen below the back up camera was a separate order (hence the separate box) where I had to make sure its video feed was via RCA in order to work with this mirror! 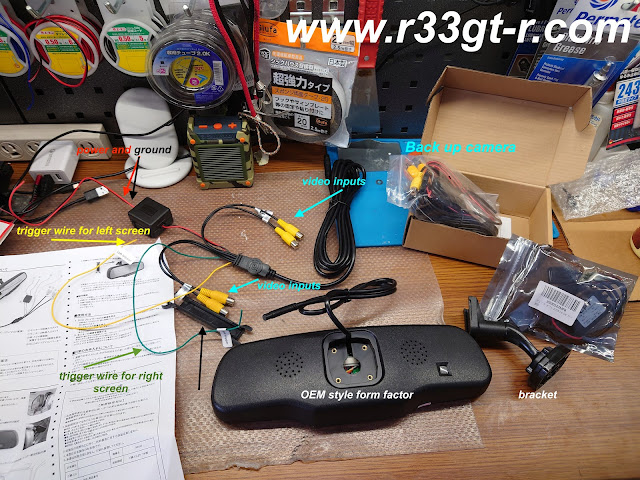 But first, I had remove the old mirror. This was pretty easy, just unplug all the cables - power, GPS, and rear camera - and then unbolt from the windshield mount.

By comparing the old and new, you can see the old one is a bit wider. The old mirror is also designed to be attached to existing mirrors with rubber bands, so in the case of direct windshield mount it has a bracket that uses clips to latch onto the protusions designed for the rubber bands. This actually lead to some squeaking as well, for those of you who may have seen the livestream that Dino did on our way down to Mine's a few months ago when we took this car down there as Dino had an appointment to take photos of a very special build for a friend.

Although like the old mirror you need to run the cable from the mirror to along the front side of the roof lining, it came with a cover to hide the cable. A nice touch, however I had to do some cutting to make it fit properly.
Good use of styrofoam here!

The next step was to remove all the old wiring. This meant I had to pop off the A-pillar cover again, and start snipping away at my white zip ties. Yes, I tend to use white zip ties to make it easy to spot what is NOT part of the OEM wire harness. 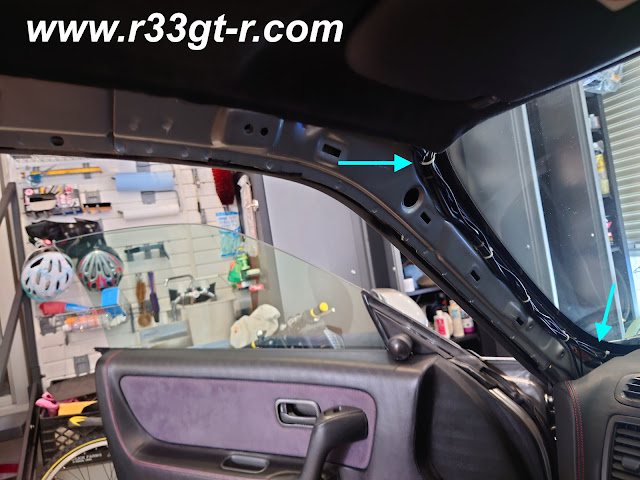 And then I followed the old wiring and disconnected everything - GPS antenna, power leads, and rear camera lead.  I initially thought I would use the existing power leads (which used those piggyback fuse holder things) but since the new mirror did not come with fuses in its harness, I decided I could find another circuit in the car to tap into without having to tap into the fuse box.
Luckily, I did not have to look too far.  Remember how Nismo Omori Factory had done their best to fix the damage done by Worx Auto Alarm to the wiring of the car? Well to recap, among other things they discovered that the wiring harness that fed into the OEM cigarette lighter was gone, so they had no choice but to reconstruct the best they could.  Part of that, my blue arrow below is pointing to - a bundle of red wiring that now provides power to the ETC reader but also leads to the cigarette lighter. Interestingly, in cutting out what was not needed, they left one male type connector. Lucky me, I simply found the female type connector that matched, crimped it onto the mirror's red power lead and I was in business (and of course after I found a bolt to attach the ground wire too - Sorry forgot to take pictures). 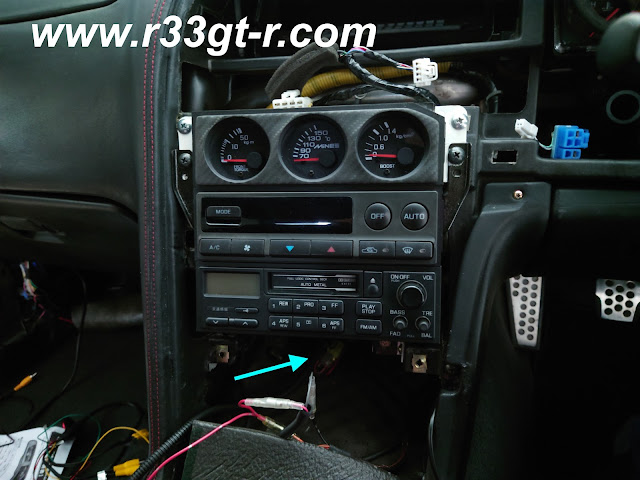 In any case, this meant two fewer wires crossing under the dash above my feet to the fusebox. Win!
So now I had to install the new rear camera. 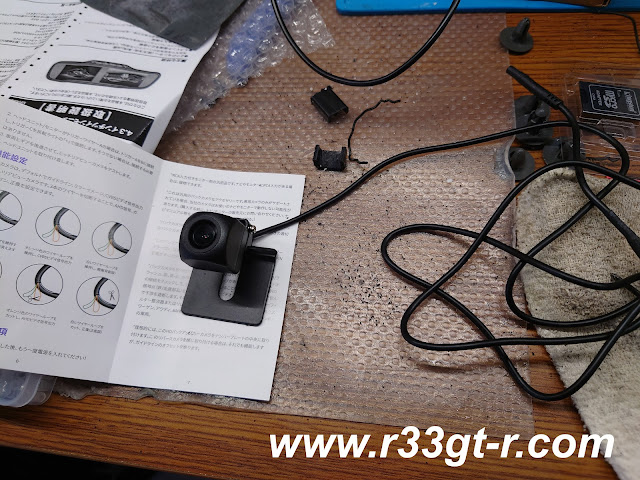 In addition to this camera having an RCA jack video out, it came with this optional plate which bolts to the camera so you can simply hook the entire assembly over the rear license plate. Every camera I've installed for the rear so far has used double stick tape to attach it to a plate above the license plate - meaning that too much vibration would shake the camera loose! Not a cool look to have, driving down the street with the camera dangling or swinging against the license plate...
So to prevent the assembly from sliding around too much on top of the license plate, I DID end up using double stick tape on the surface of the plate that makes contact with the rear of the plate. But at least now gravity is the least of my concerns. 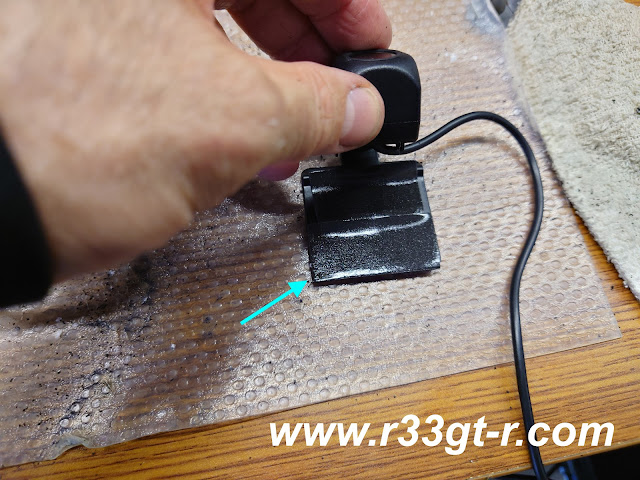 I tried to use the existing wiring from the previous camera install - but then when I had it all hooked up, the camera video imagine failed to appear when I engaged reverse. At first I thought it was the LED bulb - low resistance? - but the problem continued even with a regular incandescent S25 bulb. Using a multimeter, I finally traced the fault to one of those cheap scotch lock type connectors that had come with the previous mirror's kit. So that was the reason for why the camera failed on the previous mirror!  Can you believe that, even though the mirror was well built, a cheap connector was what pushed me over to get rid of it?
Anyway, I figured to prevent this problem in the future, for this kit I was going to do some soldering. Which I did in the trunk, being careful not to burn or melt anything... 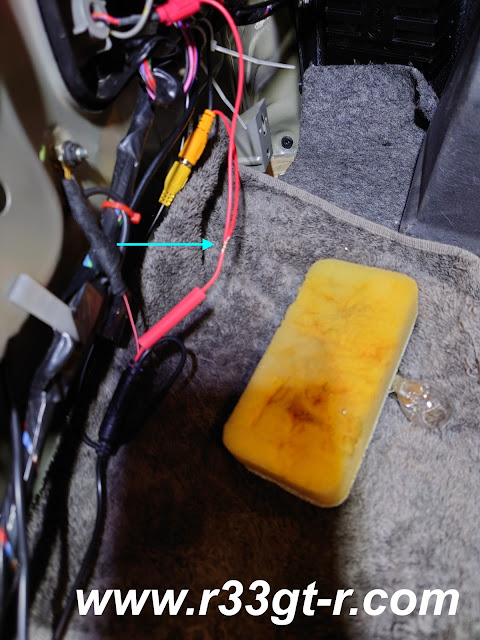 And then - voila! Works perfectly!  Engage reverse, and I get this image.
The camera allows for optional guidelines, bubble view, etc. - just need to think about whether I need those or if the set up as fine as is.
So of the four possible screens on the mirror, I now had 3 remaining. As noted above, one of the cool things about the previous mirror was that it had Google Maps built in.  However my Sony Xperia phone does a much better job, graphics and speed-wise, with Google Maps.  So I started thinking and...
It turns out the phone can mirror what is on its screen to a monitor via a USB-C to HDMI cable.
Due to the RCA inputs on the mirror, I simply found an HDMI to RCA converter (pretty cheap - less than 1000 yen on Amazon!)
So I looped the USB-C cable into my center console, with the HDMI side ending up attached to this converter which I hid under the stereo in the center stack - exactly where the mirror power leads and RCA inputs also fit. 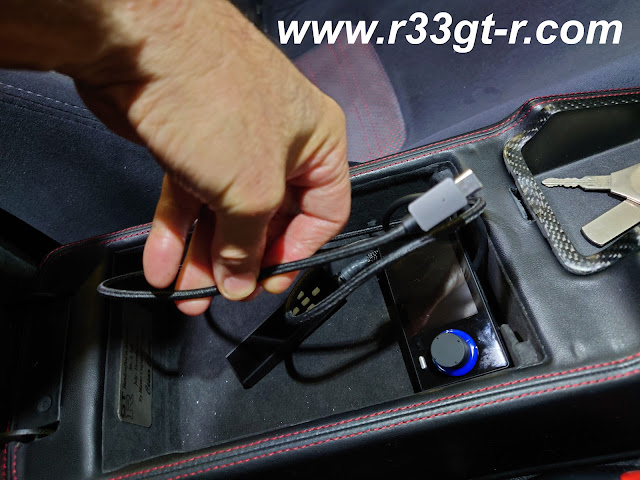 Then, every time I hook up the phone to the USB-C cable, it automatically displays what is on the phone onto the screen.  Obviously since I have to be in camera mode to take that photo, I cannot show you how Google Maps appears on the mirror, but trust me it works! 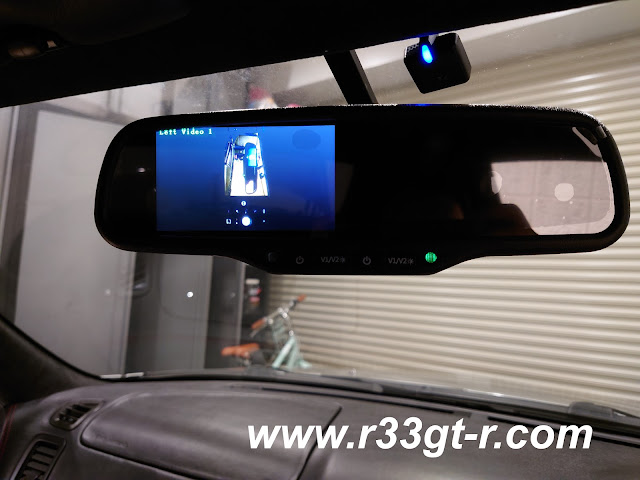 Look closely, it shows the camera view on my phone tilted 90 degrees on the right.  On Google Maps though if I turn the phone to landscape mode, it works just great.
So... quite a long post.  But remember this is only one thing I worked on.  Stay tuned for Part 2 for what I also got done!
Posted by Aki at 5:42 PM

Hopefully this rear view mirror works out this time. I'm still waiting on a front pipe to arrive from HKS but hopefully soon I can get my R33 through CA registration. I'm currently pulling my front driver-side axle as there's a pretty nasty gear oil leak I want to resolve. Fingers crossed I get that fixed soon. Have you seen Hiro Amateur Garage on YT? I've been watching his videos recently and it's surprising how he manages to pull his engine and tear it down in his garage: https://www.youtube.com/watch?v=5EtsNyQznYc

I hope it works out for you too! Let me know how it goes. Let me check out this Hiro guy - yeah I am NOT touching my engine in my garage lol...