New Hi-Tech Mirror? - Yeah Not Sure About this Mod...

So those of you who have read this blog in the past know that, back in 2012 I was lucky enough to have my car outfitted with a GENTEX mirror, courtesy of the Japan affiliate which turned out to be just down the street from where I live! 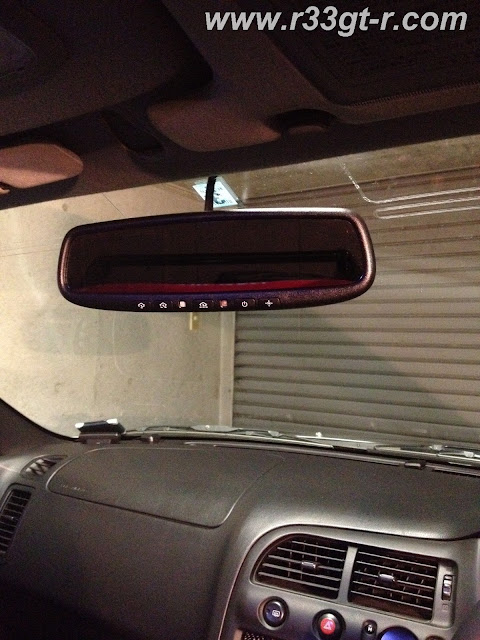 It was an awesome bit of kit, being very OEM looking but with a small built in LCD screen to which hooked up to a back-up camera, helping to not just modernize the car but also making it so much easier to back up and park!  So even though I wasn't able to use all the options on the mirror, for example the built in garage door opener switch, it was a nice addition. 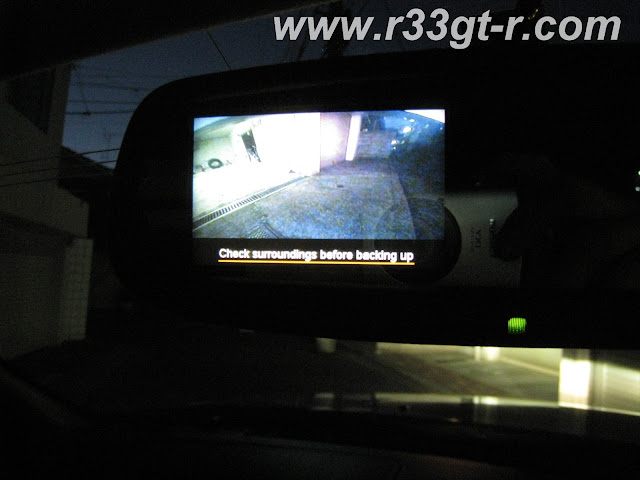 Unfortunately, the Gentex mirror was another victim of Nakamura of Worx Auto Alarm, because when I got the car back the mirror's wiring had been removed, rendering the LCD display useless (as well as its auto-dim feature, etc.). I guess he did not agree with my idea of having two cameras in back, one for the mirror and one for the 2DIN Pioneer Cybernavi he ended up installing...

Anyway, ever since, I have simply been super careful about parking, but a couple of years ago I realized there were a lot of inexpensive LCD mirrors with back up cameras that now incorporate "drive recorders" (i.e. dashcams) and run on an Android platform, meaning that they come with GPS based maps, music, Bluetooth and other auto associated apps. So rather than finding another more modern Gentex mirror, I ordered one of these new Android ones and then decided to focus on other areas of the car first, namely the complete removal of all the wiring left over from Worx, including the original back up camera.

So here are the contents. Note, even though I was sent the Nissan bracket, becuase my car had the window mount due to the GENTEX install I ordered that mount as well. 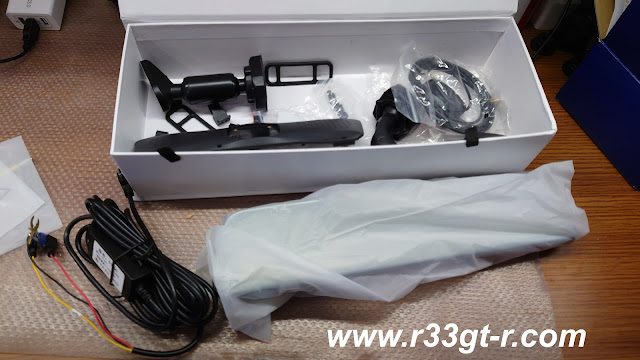 Incidentally, most of these Android mirrors that pop up on an internet search are the "strap-on to original mirror using rubber bands" types.  This one however came from a seller that offered different kinds of brackets for different OEM vehicles and a secured mounting plate that eliminated the rubber straps.

Installation was relatively straightforward.  However because I had ordered this right before re-installation of my OEM stereo deck,  I was able to take advantage of the interior being removed and lay out the wiring for the new back up camera that came with this new LCD mirror.  But it turns out that the recommended installation method was to route the wire along the roof/headliner. By choosing to route with emphasis on stealth, I routed from the trunk sides, to behind and then under the rear seat, and then along the left side of the chassis, following the left speaker wires... and then it  turns out that the wiring was too short!  Luckily I was able to get a 2.5mm 4 pole, 2 meter extension cord especially for dash cam back cameras! All that was left then was to attach the LCD mirror unit to the GENTEX windscreen mount then run some wiring, to include a GPS unit, the power lines, and the back up camera line.

So first step was to remove the Gentex unit: 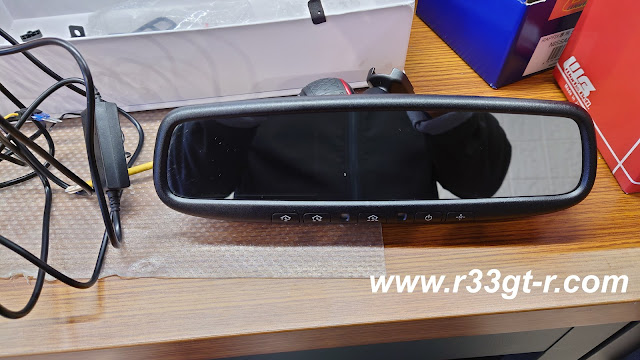 And then wire in the LCD unit into the car's ground, power and accessories circuit.  The mirror came with these terminals with built in 15A mini fuses (light blue circle below) that plug into the car's fuse box, but two problems:

First, the car does not use mini fuses but the standard size (ATO/ATC) fuses, so these could not be used in the first place.  Second, I want this mirror to be on its own circuit, and keep the fuses already in the fuse box for the respective power and accessory circuits.  This meant that I had to cut off the original terminals and solder on the add-a-circuit fuse holder that fits standard size fuses which in turn could be plugged into the fuse box next to the driver's foot.  Because the included power leads were relatively short - likely I should have routed up the driver's side A pillar but I wanted all the wiring going up the left A-pillar, I soldered on extra length of wiring for the power, accessories and ground, as in the photo above.

As I had back up camera lead extension already at the foot of the left hand A-pillar, I just made sure to route the power leads under the steering wheel and behind the glove box, making its way up the A pillar.  Then all that was left was the GPS antenna. 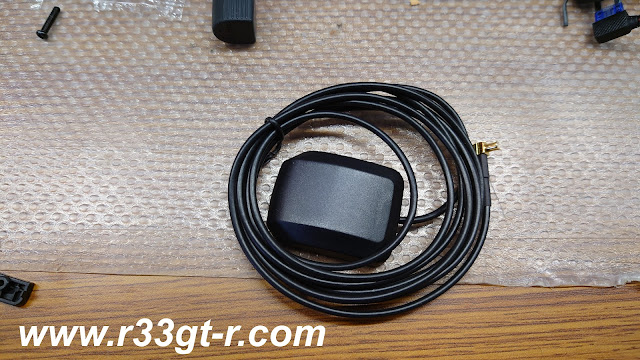 Using some double stick tape, I placed this unit straddling the two front vent pieces, in the center of the windscreen, and tucked the wiring between the windscreen and the dash. Then I attached the mirror using the mount to the base on the windshield, and made sure the circuit worked: 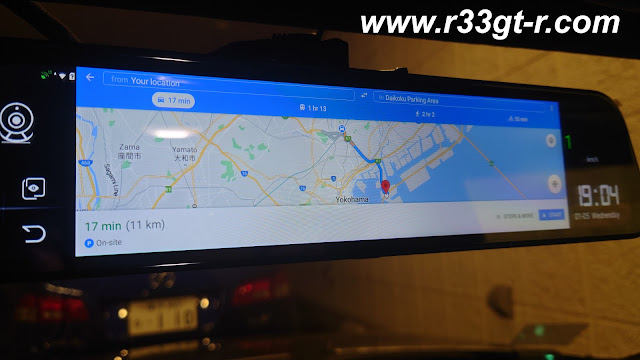 And of course it records what is in front of me. 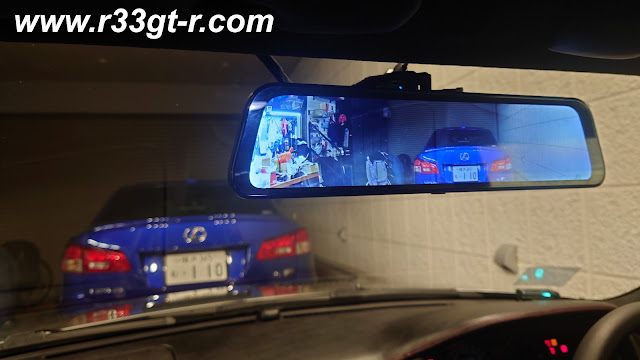 Well, here are the problems.

1. Android 8.1 seems to work very slowly. Nice to have the apps, but wow how slow it seems.

2. Since I refuse to pay for a SIM card just for the car - I am using my phone's WiFi hotspot to this mirror.  I have unlimited data transfer, but somehow I think the speed of data transfer just is not there.  Or it might be the Android OS of the mirror.  Even at home, when I link the mirror to my very fast home WiFi, it seems slow.

3. Intermittent back up camera - sometimes the rear camera does not work.  To get it working again, I have to restart the mirror. And actually, the other day it did not seem to be working at all: 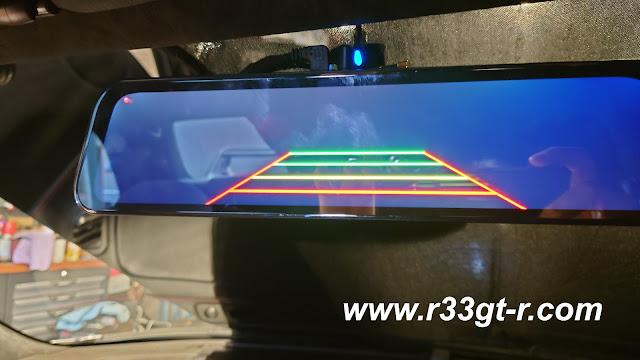 4. Squeaking - I think it is the bracket, I will try to fix it, maybe with some Tessa tape?

5. And most annoyingly - inability to retain the mirror function when viewing the screen.  So it is either playing with the apps and no rear view, or rear view but no apps. Stupid.

So, next steps.  Since I went to the trouble of wiring this up, I don't want to give up but since it IS relatively inexpensive I think I am going to try to find another similar rear view LCD mirror with better features and see if it will work with the same bracket and wiring.  Otherwise, I may end up researching and going back to a proper mirror from GENTEX again, maybe? We shall see...