So while I prefer the look of the OEM Series 3 lip, the drawback is that due to it being 20mm longer than the Series 1/2 lip, it seems to ALWAYS get scraped up.  In fact, this is the reason why original buyers of the Series 3 cars were able to order the Series 1/2 lip, as an option from the factory.


When in its OEM black ABS plastic form, sometimes the scratches aren't very noticeable because they are on the bottom edge, but once you make the decision to paint the lip, then a scratch can no longer be buffed out, or sanded down like ABS plastic can.

So in my quest to protect the lip spoiler, I am currently experimenting with the Road Warrior Plus paintable clear bra alternative.  So far, so good I think. However there is nothing in place to protect the lip from scrapes, in case I end up pulling into a slightly too steep driveway. I need something that attaches UNDER the front lip spoiler that can sacrifice itself and give tactile and audible warning when it hits something solid, and cause me to stop (also something that doesn't weigh too much or cause drag is important, too!).

Long time readers will recall that in the past I tried long rubber strips (a Nismo aftermarket part), as well as thin aluminum strips for this purpose.  The aluminum worked well initially, but I found that a section would give and break away but other sections would not, creating pieces that would drag on the road, and even end up getting caught up in the wheels. Not good.  The reason being I just could not attach them securely enough.

When I consulted my engineer friend Andrew Brilliant, his idea was to have a separate frame or section that could absorb the impact without putting stress on the lip spoiler and bumper (like what happened and resulted in my having the bumper and lip spoiler repainted...)   Although his idea was too complicated for a simpleton like me, one thing I did decide to follow up on was having something that was "soft" and could "absorb the impact."

Initially I was thinking of rubberized metal strips that I would bolt on using the screw points of the front diffuser, but that got too complicated. I finally settled on this: 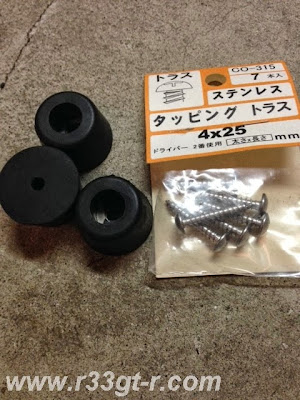 The install was very easy. Less than 2 minutes per screw - that is, I would unscrew the shorter screw that is currently used to hold the diffuser in place on the leading edge of the front lip, then replace with the longer screw threaded though a rubber grommet, to end up with this: 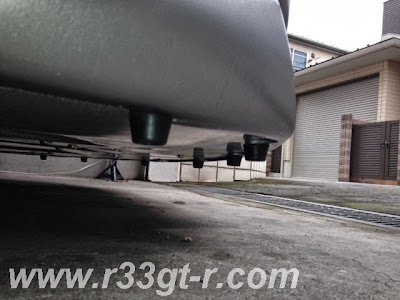 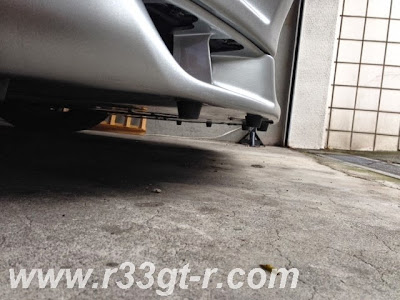 Very simple, right? Hopefully these are the lowest points of the front lip spoiler and will drag or catch first.

So far I've done a 300 km trip that included Sodegaura Forest Raceway for the Skyline Festival 2013, even drove on a dirt road leading to the gravel parking lot, and no problems. Hopefully these will work - not that I want to, but they are cheap to replace if they ever get torn off. I'll let everyone know how and if they work...
Posted by Aki at 12:12 AM

The series 1/2 chin looks quite like the GT-R BNR32 chin. :) A bit off actually since the BCNR33 is fatter. The series 3 chin looks good on the car but yeah sacrifice on the scraping. ;)