Once installed, the first thing you will need to do is ensure the DTM-II unit "learns" the voltage outputs for closed and open throttle positions on your particular car.

Here is a video clip where Ito-san and I demonstrate how this is done.
This shows that in my car, the voltage ranged from 0.4V at close to 4.1V at full open throttle. This is consistent with what's to be expected, as shown here: 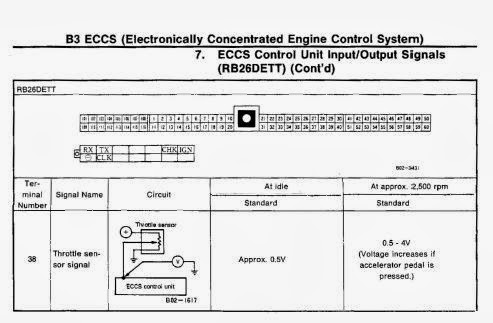 Ok so now we're ready to roll... except you'll need to figure out which setting you want!

Here is a video I shot (at night, sorry it's blurry - the actual device is super crisp and clear) that shows how to switch between the various settings.

Before I describe each of these settings, we first need to review what the DTM II device is doing. Recall that the ATTESA ECU bases its decision making on various inputs, 3 of which are, the car's longitudinal and lateral G forces (from the onboard G-sensor), and throttle position.

Here is a diagram showing the ATTESA map in 3D, showing just how G forces affect ATTESA output. The right axis is lateral acceleration, the left axis is longitudinal acceleration, and the vertical is amount of power going to front wheels.

The impetus of Do-Luck to develop its original Digital G-sensor was that due to age, the OEM G-sensors, which are analog devices (basically a pendulum in oil), were degrading to the point where the signals being sent to the ATTESA computer were inconsistent, slow, weak or non-existent, thus preventing the ATTESA from performing as it should.  And an OEM replacement cost somewhere around 130,000 yen and were still analog.  Digital G sensors are now commonplace (most smartphones have them), are inexpensive, ultra accurate, and fast. So it was only natural that the Digital G-sensor was developed.

Both this Digital G-sensor and the Tarzan G-Box, however, do not simply send back the actual raw G force data to the ATTESA ECU.  Both devices actually modify the signal being sent by multiplying the actual raw G reading by a pre-set variable (or set of variables, in the case of the Tarzan G-Box), which, as can be seen from the map above, means that the ATTESA is engaging faster than before because it believes that the car is experiencing higher Gs than it really is. As an example, if the car is actually experiencing an acceleration of 0.3Gs, but the Digital G-Sensor multiplies that number by a pre-set number, say 1.5, so the ATTESA thinks the car is accelerating at 0.3x1.5=0.45Gs.

G4 mode is user programmable - that is, the user can choose by what percentage each of the 4 (front, rear, left, right) G forces should be multiplied by, as sent to the ATTESA ECU. The user can choose an amplification between 0% to 200% for front, left and right G forces, but for the rear G force (i.e. braking), the amplification range is between 100% and 115%.

Here is a video where I demonstrate the G4 mode:
So what is ARX mode? Remember with the G mode settings, the raw G-force signal was amplified by a set variable.  In ARX mode, the throttle position comes into play along with the G-forces (however there must still be enough G-forces first, as throttle position alone won't activate ATTESA).  Further, unlike in the G modes where the raw G-force signal is essentially only "multiplied" by a set variable, in the ARX modes both the throttle signals and G-force signals are outputted according to a unique "map" (still based on the original ATTESA ECU map).  Ito-san explained that, rather than a linear output (where all the incoming data is mutliplied by the same variable), in ARX mode each data point is specifically associated with a specifically amplified (or de-amplified) data point which is then sent to the ATTESA ECU.

Ito-san calls A1 mode the "street" mode, and the A2 mode the "circuit" mode.  A3 mode is again a "pure" signal mode for both G forces and throttle position.

Speaking of throttle position, the user can also adjust the throttle position signal being sent to the ATTESA unit, as I show in this next video clip.
Note that I was getting tired and lost my train of thought at about the 2 minute mark, and mistakenly said that at 100%, I would get the "maximum of the ATTESA working to pull me out of the curve." Note this is only true if there are G forces in play as well, as noted earlier.

Also during the video at around the 3 minute mark, I referred to the Optional Map Edit, which refers to one of the two leads which the DTM II has.  Originally, the OPT lead (as shown below) was designed to hook up to the AYC in the Lancer Evolution cars (this unit works with them as well); however as I mentioned in my previous post Ito-san is working on using this to control the Active  LSD found in V-Spec 33 and 34 GT-Rs. 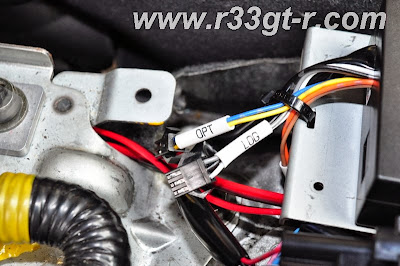 So that's pretty much it for now. I apologize if I left anything out or was unclear.

Finally, in response to a few questions that I have already gotten:
1) No, this unit will NOT allow you to switch to a pure rear wheel drive (FR) car.  Remember in 33s and 34s, there is always some power going to the front, so the only way to get around that is to essentially have a separate switch that cuts power to the ATTESA ECU. (but then you'll get warning lamps). Although I wonder what would happen if you set the front G force setting to "0" in G4 mode...(theoretically, that would mean no signal gets sent to the ATTESA unit, no? Maybe someone will tinker and find out!)

2) The difference between the DTM-II and something like the below, is that traditional ATTESA controllers only amplify the signal from the G-sensor. The DTM-II has its own G-sensor, and further allows for manipulation of the throttle signal. 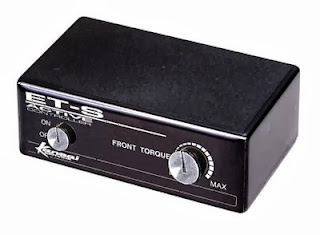 3) Is it possible for the user to have another channel to self-program? No, however Ito-san has indicated that select dealers will be given the ability to change the programming found in A3 and G3 modes, giving users even more choices (e.g. a setting specific to a certain circuit?)

4) Is it possible to change the ATTESA "map"? No, because that map is onboard the ATTESA ECU.  However given the ability to send different and amplified G and throttle position inputs, it is possible to use only certain sections of that base map (e.g. the most aggressive portions), or distort the map so that the ATTESA unit's lowest/highest thresholds are raised, lowered or both.

In my next blog post, I'll post my driving impressions, as well as address anything else I left out! Leave a comment or question if you have one, thanks!
Posted by Aki at 1:44 AM

Aki, you say that throttle position alone does not activate the ATTESA.
Have you seen my post on GTROC reference rapid start?

Hi Andy - well I was not referring to a standing start, but more while driving - in any case, unless I can feel a change in G, you don't see the torque meter gauge needle move. Granted as you discovered, the needle doesn't reflect the pressurization that is going on, which depends on throttle position.

Good work as usual Aki. Any chance of a copy of the document you have with the ATTESA chart in it? The 2nd one down.
Also, how does the g sensor fix to the car? Bolt, velco etc?

Andy, yeah sorry I don't have a copy of a document with the diagram, I literally took a photo of it out of one of the R33 GT-R books.

The g sensor is bolted onto the frame which originally held the OEM g sensor.