So having gotten my car refreshed (i.e. front bumper repainted) recently, this time I'm determined to make sure that the newly painted parts remain as clean and pristine as possible.

One solution, of course, is to never drive the car, but this is not practical.

After doing some research, I believe there are four solutions:

1) Do nothing. That is, just have the bumper and front lip spoiler repainted every other year or so, whenever the damage becomes an eyesore.

2) Application of 3M Scotchguard Paint Protection clear film.
The drawbacks are, however, expense (I have found very few shops in Japan that do this film application which means very expensive), and in this particular situation, the inability to cover all the painted areas, given all the openings, scoops and complex shapes on the front bumper and the lip spoiler.

I actually tried doing this myself before with limited success (the headlights came out great):
However even though I managed to wrap the front lip spoiler, it never looked right as the cutouts for the front brake ducts were sloppy, and then when I scraped the lip spoiler, the impact left the film scarred and scraped up too. So when the lip spoiler was repainted, it was removed of course.

3) Application of 3M Paint Defender Spray Film (I have no experience with this, but hope to try it out in the near future)
This seems very promising - almost the quality of the 3M Scotchguard film, but in a spray format? The internet reviews are mixed...

4) Application of Road Warrior Plus
This is what I ended up getting.  Basically, this is a liquid that you paint onto those car surfaces that you want to protect, and when dry it is supposed to serve the same purpose as the clear film.  That is, provide impact protection from stuff on the road. Of course, given its relatively thin (when dry) nature it is marketed more as a temporary solution for track days (apply, race, then peel off) and long distance driving where road debris can be expected to hit at high speed.

Ingenious in concept, but a) is it really that easy, b) does it look ok when dry, and c) does it work? 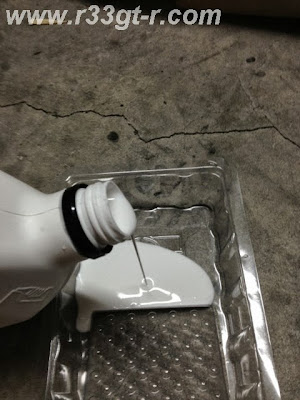 So I got to work. First, as many reviewers remarked, this stuff DOES smell, and have the same consistency, as Elmer's glue.
Before pouring the RWP into the tray, I wiped down the front bumper and lip spoiler. Also, I decided to do my left side mirror as well, more to be able to demonstrate to people who ask.

This whole process took only about 30 minutes, and I did two coats (dried the first layer with a hair dryer), at night, when it was about 18 degree C outside (so maybe a bit more inside the garage?)

Here is what it looks like, in daylight after it is dry.
s Close up, it looks like really bad orange peel, but it feels like plastic, not paint. There were some areas where I had forgotten to smooth out the liquid well, which resulted in some clumping but in the end they dried clear too.  As you can see from far away it doesn't look too bad, I think.

I had actually done this right before my visit to Do-Luck and Nissan Prince on the 30th, and both Ito-san and Koyama-san thought I had subjected my car to the worst ever repaint...before I explained that it was a roller applied film...

Now to test it...seems almost too good to be true if it can actually provide significant protection. Yes I've driven to Shinagawa and back, but I think we need a longer trip. Stay tuned....

again interesting, I assume you've read this, http://www.speedhunters.com/2013/09/step-by-step-protection-kleers-aero-performer/ and talked about it, i was wondering if you had thought of using that on your car, my main problem though is carparks, nearly every mark on my car i can attribite to someone opening their car door and letting it hit mine. if someone could come up with a product thats stops that they would make millions.

Yes actually, Dino and I did talk about using this. However the Kleers product is more akin to the Zaino I use currently now...I was more interested in impact protection, hence the RWP.

I totally sympathize with your situation, though - when I was back in the USA this was my daily nightmare. Luckily here in Japan people tend to be much more careful and considerate.