An Interview with Aerodynamicist Andrew Brilliant

So it turns out I’m lucky enough to live literally down the street, here in Yokohama, from fellow American and Cal graduate Andrew Brilliant, who is an up-and-coming racing car aerodynamicist /engineer. His work includes the Under Suzuki S15 (record lap setter at Tsukuba) and the NEMO Evo (record holder at WTAC), both featured recently on Speedhunters as well as other interviews.  Back in the US, he also became well known for his work on his own Mitsubishi Eclipse which he modified using aero techniques, which helped it become one of the fastest tuned FWD cars out there.


Anyway, it’s clear the guy is a gearhead who not only knows, understands and applies aerodynamic theory and techniques not only to his own car (making it one of the fastest and most aerodynamic Eclipse race cars ever), but someone who is expert enough to be successfully make a living in this area, various racing cars to his credit (making them so good aerodynamically that he’s had the rules changed on him… on more than one occasion).

So this past Sunday, Andrew was kind enough to drop by my garage for a couple of hours and give me not only a quick education on aerodynamics, but also point out the good and bad of the R33’s aerodynamics, and give me some ideas on how I can improve my own car’s aerodynamics.  Of course, some of his ideas are a bit too extreme, more applicable for race cars than for road cars, so the extent to which I will be able to modify my car, if any, will be limited.  Nevertheless, worth trying I think!


There is generally a misconception as to what constitutes good aerodynamics on a car. For example, manufacturers chase low Cd numbers, and while this may be important in a mass market car where improved fuel economy is the goal, on a racing car, while drag numbers are important, downforce (or negative lift) is just as, if not more, important.   Having sufficient downforce means the car’s tires stick to the ground better, resulting in better acceleration, handling and braking.  More downforce on the front end of the car only, for example, will reduce oversteer.  The other way to get more traction would be by increased vehicle weight, which then requires more engine power, reduces gas mileage, etc.  So aerodynamically generated downforce is definitely the way to go, as this article explains.

Unfortunately, the usual downforce devices also generate drag, so a balance must be struck.
Speaking of drag, it turns out that the Cd is not the only drag number at play – the frontal area of the car is also important.  Both numbers should be minimized in order to reduce the total amount of drag on a car.  The best car Andrew’s seen in terms of total drag force is the Honda NSX – small frontal area and low Cd number.  Unfortunately, the frontal area cannot easily be changed without basically redesigning the whole car, obviously.  So with respect to my car, my emphasis will be on improving downforce.

Aero Devices: A Quick Summary (not complete of course):
Spoilers -  what is on the rear of my car is a “wing” and not a “spoiler.”  This may sound obvious but many people mix this up. And, it turns out that the term “spoiler” came from the concept of a “lift spoiler” – in other words, the device was originally designed to eliminate lift on a vehicle or wing, where you might normally have lift.

Wing - A wing on the other hand is more efficient than a spoiler – it’s basically the most efficient aerodynamic shape. A string, for example, 1/10th the size of the wing, has MORE drag than that spoiler, so when people use wire to support various parts on a car, they are actually creating more drag…  Wings and spoilers, however, are usually found on the rear of cars, and so this is only really good for generating downforce on the rear of the car.

Canards - According to Andrew, he would have to see what’s out there for the R33, but most of the designs he sees appear to be copies of Super GT stuff.  However, canards are all are very design specific – i.e. every bumper is different, and so there is no such thing as a “universal” canard.  There are explanations out there as to whether carnards are down force producers or vortex generators, but either way, their use is controversial.

Diffusers - A diffuser is basically an expander – it takes a flow of air and expands it to a larger volume of air.  This works due to simple physics (conservation of area – increase the velocity, trade off somewhere else) - because you have ambient air pressure behind the car, higher air pressure in front of the car, and then the air, flowing from a larger front area to the rear via a constricted area (the diffuser), the air will have to travel faster in the constricted area, thus reducing the air pressure! This reduced air pressure creates negative lift, or downforce.

What about the R34 rear diffuser? Andrew opined that its benefit is mostly to reduce drag and maybe produce some downforce, and of course there is the nice side effect in noise reduction.  This makes sense to me, as anyone can see that air passing under the car would otherwise get caught against the bumper.

Flat bottoms:  People may think that flat bottoms contribute greatly to aerodynamics, but according to Andrew, in racing at least, the rule mandating flat bottoms was developed in order to equalize the playing field for all aerodynamicists.  On a road car, however, it is hard to justify the expense, cost and weight in that, a major problem is that such a device may prevent proper cooling of the gearbox and exhaust. We therefore did not spend much time discussing this (even though secretly I think I want to experiment with this...)

Side Skirts:  the primary purpose of these is to create a low pressure area under the car, mainly by directing the flow of air to the rear diffuser, if any, as well as to prevent ambient (and thus higher pressure) air from interfering with the air under the car (which should ideally be lower pressure).

So that’s quite a bit of reading for today… tomorrow, will post up specifics on the R33 and a short analysis of what I can do to improve my car…

Here is a sneak preview of Andrew "working some magic" on my car to make it more aerodynamically efficient... 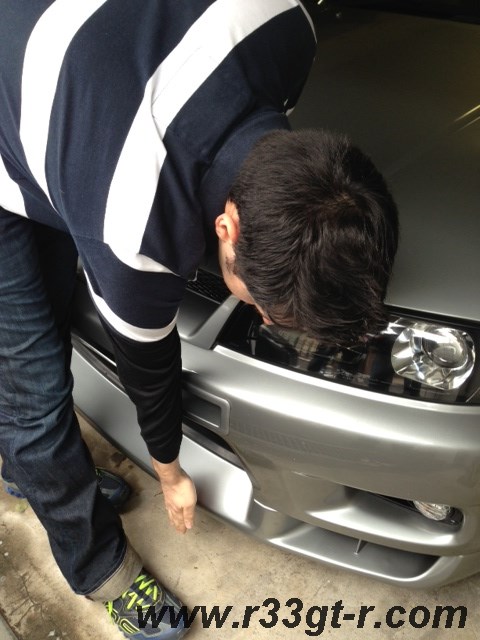 Loving this write up

HI.
Do you think that a r34 gtr front diffuser can fit a r33 series one bumper

I've seen someone modify one to fit but it wasn't exact.