So in addition to those "fluidic" nozzles, I ordered something else from the US at the same time (not wanting to pay more in postage than in parts!).

I was very concerned when I opened the package, however, and these instructions greeted me:
Is this included in every part sold in the US, or just the potentially dangerous ones?  I guess this part COULD be potentially dangerous in the wrong hands... or MAYBE there is concerned that the Velcro (R) on the backside might not be good enough to mount this, meaning that during some aggressive driving, it could go flying about the car... unless installed by a pro....

Then again, it could be the contents. Those scissors in the wrong hands, that might be deadly.

The R33 GT-R didn't come with this, of course. But luxury cars (like Mercedes) do. So why not my car?

So I ended up mounting it on the "carpet" between the two speakers on the rear parcel shelf, where it fits perfectly (although it would be cool to have this section indented and/or covered like the German cars...).   Oh well. Better than nothing, but I wonder if installation here might lead to "serious personal injury or property damage"??  Unlikely, I think as this "carpet" DOES NOT LET GO of VELCRO!! 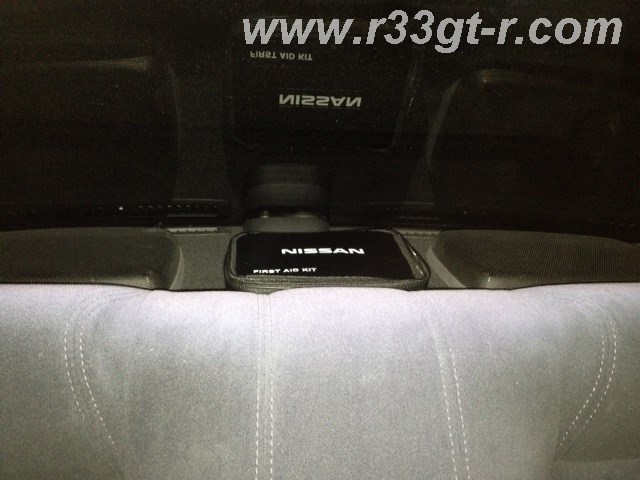 Anyway, a somewhat of a flippant post - actually there were NO installation instructions included - but I wonder - who of you out there have such a kit in their car? Any ideas and comments on where to mount it? I think in some countries, an onboard first aid kit is required, no?
Posted by Aki at 4:35 PM

It's not required by law here and my car is not 'first for use daily' I don't have one in there. However I do have tools and upon lending my tools to a stranded motorist he cut his hand on my knife! So I guess I will be getting a small First Aid kit for the Skyline after all!

I ordered it online from a US dealer.