So picking up where we left off yesterday:


So, given our discussion on aerodynamics, I asked Andrew Brilliant, my neighbor and world reknown aerodynamicist, what’s good and bad on the R33 GT-R?

What’s good is that Nissan and other Japanese manufacturers in the 90s actually exerted effort in putting their cars through aerodynamic development, trying to reduce drag and increase downforce.
As a result, the 33’s rear spoiler produces more downforce at the full down setting than the R35!  However, the R35 is NZL (near zero lift), while the R33 has positive lift on the front.

Andrew believes this is most likely (and is expected in a road car) due to all the openings for cooling air, which have not been properly managed, as well as the leveraging effect from the rear wing.

So what’s clearly bad about the R33?  Well, for starters, it has a large frontal area. This translates into lots of drag even with a relatively low CD of 0.35. Of course, compared to the R35, its frontal area doesn't seem too bad...
Like its RB26 brothers, the R33 also has lots of intakes for the engine intercooler and radiator, as well as various other openings.  What this does, of course, is to increase the amount of air under the hood, but if the car doesn’t have a vented bonnet, then the only path for the air to flow out, would be under the car.

Well then, what about those bonnet spacers that raise the back of the bonnet? Do they work? The answer is a resounding “no”! And the reason for this is, because the windshield area is a high pressure area, so if the bonnet is raised, then air gets forced back INTO the engine bay. This might be good from a cooling perspective, but not an aerodynamics perspective. (note: recall those giant “cowl induction” hood scoops on American muscle cars – they face backward for this very reason!)

What about my car? There are various bits that I have added without really knowing what I was doing, and of course I have some future plans as well.
1.       For example, the aforementioned R34 rear diffuser appears to be a good idea – with a slight weight penalty, but it would clean up the rear of the car, reducing drag, maybe some additional downforce.

2.       Yahoo Auctions sourced rear carbon wing blade.  I’ve always been curious about this, because looks-wise it’s the same as the OEM wing, but it has this small upwards flap (aka Gurney flap) at the rear edge.  Good news, Andrew believes that this probably IS effective, and in fact, may even reduce drag a bit! 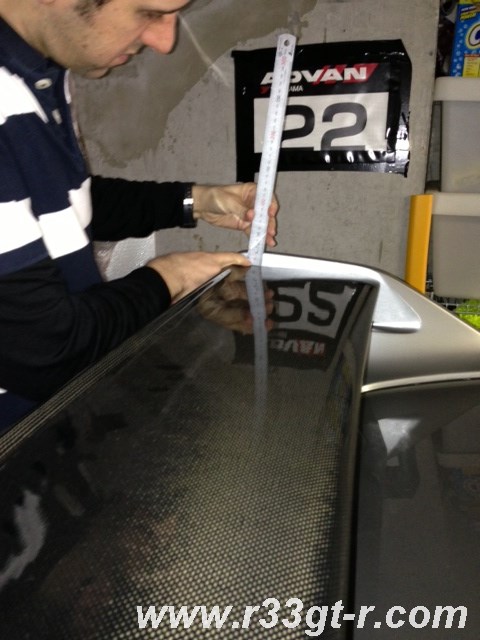 Additionally, we discussed the Nismo 400R and BNR34 dual blade rear wings, and how they work. This may be a worthy upgrade in the future...

3.       Wider rims and tires: Wheels are always a source of drag and lift according to Andrew, and not much can be done here except run skinnier tires and wheel caps (which then might lead to a brake cooling problem…I wonder though if there is anything that can be done here? Hmm....)

4.       Side skirt and Side vents.  Unfortunately for one of my planned projects, the conclusion here was to cap off the functional scoops on the Nismo side skirts.  To the extent that the Nismo side skirts extend to the ground lower than the stock ones, there is some effect.  However, unless I actually have a need to use the vents to cool the rear brakes, I was told it was better off capping off the scoops – because any time air is channeled somewhere, drag is created.   So first I will have to determine whether rear brake cooling is even needed (Andrew believes probably not), so I will have to experiment with this.

5.       As mentioned earlier, there is lots of air that gets trapped in the engine bay with no way out except down.  Whatever work the front and rear diffusers would do thus gets disrupted.  So I first need to figure out how much air is actually needed, then begin sealing up areas which lead to the air getting trapped, and guide the rest of the air to the cooling bits - the intercooler and the radiator.  This would mean removal of my front bumper, and then finding various places to seal off. Of course, the easiest solution is to install a vented bonnet, but of course that takes away from the OEM look of my car, hence I am resisting.

6.       Front bonnet lip. I actually have one, but have yet to install it (the idea of drilling holes in my stock bonnet…arggh).  This should work to improve the flow of air under the bonnet, but again, whether this is something to be done (see above) is questionable at this point.

7.       The HKS Kansai front diffuser:
As long time readers know, I used to have this on my car, but took it off in favor of the current three piece from Silk Road.  I had always wondered about the theory behind that, as it seems counter to everything out there on aerodynamics.  Andrew believes that the hump in the middle is designed to collect a bubble of air which generates drag, but also causes a pitching movement which then helps push down on the front wheels and lift the rear which probably has more than enough downforce to begin with.  Makes sense, but apparently this was popular in the late 90s/early 2000s in Super GT, however there are now more efficient ways to generate even more front downforce.

Anyway - thanks to Andrew for the education! It seems there is a LOT I can do to improve the aerodynamics on my car - whether or not I actually do something about it, remains to be seen. Having lots of engine power is good, but the idea of using aerodynamic principles to get the car to stick to the ground better is very tempting...

Here are some race car specific links that I came across in doing research for these last two posts, for those who may be interested:
http://www.mulsannescorner.com/
http://www.racecar-engineering.com
http://www.rapid-racer.com/aerodynamic-upgrades.php
Posted by Aki at 11:29 PM

A very interesting and informative read! There are many options for aerodynamic modifications, as you have mentioned, which ones will you eventually use?

Hi Matt - well it all depends on how much money and time I have....but probably the R34 diffuser for sure!

Yep - as Andrew reminded me, everything he's done has been on race cars, so for what's primarily a road car with the occasional track day, what to do??

Stay tuned to find out (although given our schedules, probably some time in late summer is when we'll be done...)

Great write up, i am going through the same process with my car. I want near oem but good on the race track

Thanks James -would love to know what you are planning and/or working on!

Best read I have had in a long time. I was only looking at a small lip on the back of a rear GT-R spoiler the other day and thought what can that possibly do! Now I know!