So for the biannual shaken inspection, my friends Dino and Alex, as they had helped me prep the car, had removed the rubber strip on the bottom of the front spoiler. This had left some ugly glue residue, and further exposed some scratches that the rubber strip had hid along the bottom edge.

What to do? I was tempted to go back and put a new rubber strip on the bottom, but then came across this - which I decided to try out.

Turns out this while the material is made by 3M, it's actually made here in Japan by 3M Sumitomo...for the quality and detail, I am not surprised!

Anyway - I went ahead and ordered a large roll - they only come in one maximum width - but which was not long enough to wrap the front splitter - so I ended up measuring the splitter end to end, and ordered more material than I needed, just in case. I also ordered the recommended primer, to ensure a solid bond to the underlying surface.

Of course, I first wanted to practice, so I decided to use a side sill - easily removeable and fairly small.

Here is a picture of the 3M material before the glue surface is exposed. 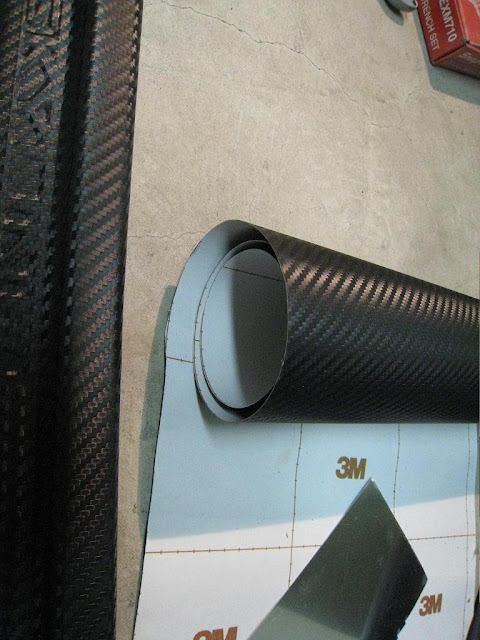 In creating this practice piece, I cut a sheet about the same size as the sidesill, plus a little extra on all sides. The most difficult part of this was the "SKYLINE" lettering, which required lots of patience and liberal amounts of heat from the wife's hairdryer. (and this in turn burned my fingers)... 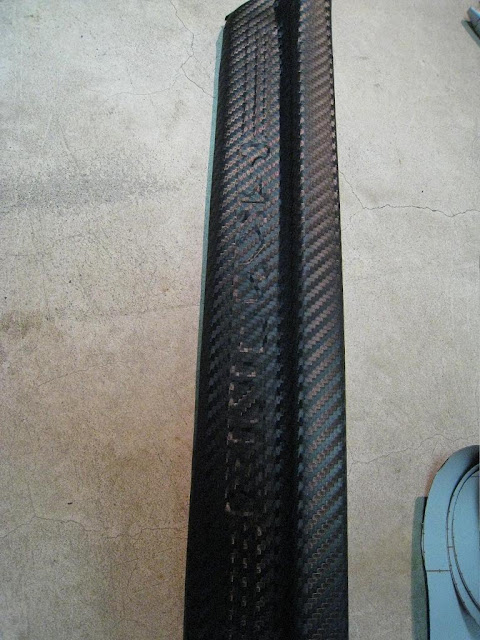 3M also has this primer, used to prepare surfaces for maximum (and permanent) adhesion. As you probably know the Di-noc material is used in construction to simulate stone and other textures, so I guess use of the primer is needed there. I ordered it because, with the splitter in the very front, I wanted to make sure the Di-noc stuck. 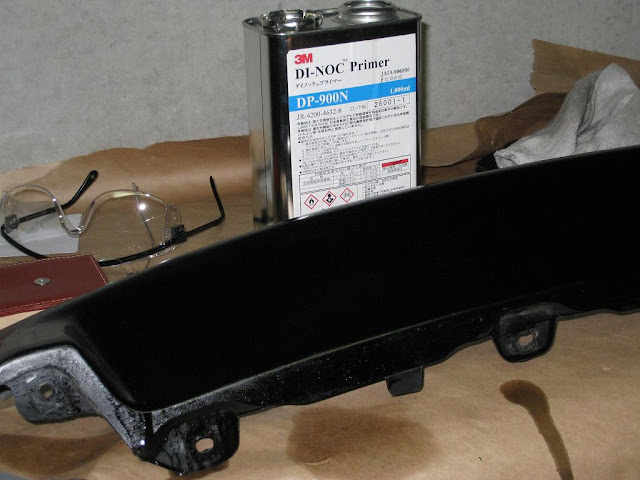 Here's how the splitter looked after the primer had dried to a tacky consistency. 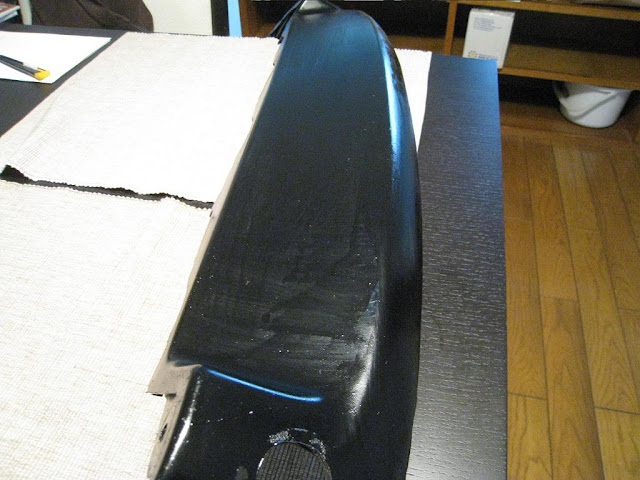 Ok, now onto wrapping the splitter itself. You can see I cut out a large sheet, a bit longer on both sides of the splitter itself, and began wrapping. Hard to tell, but I had focused on making the material stick in the center middle area first. 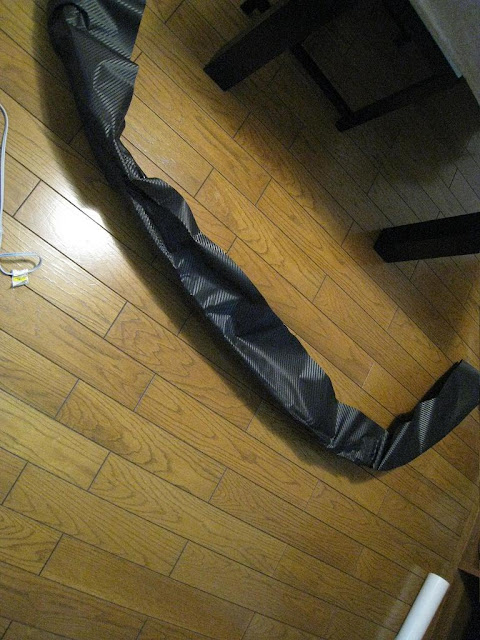 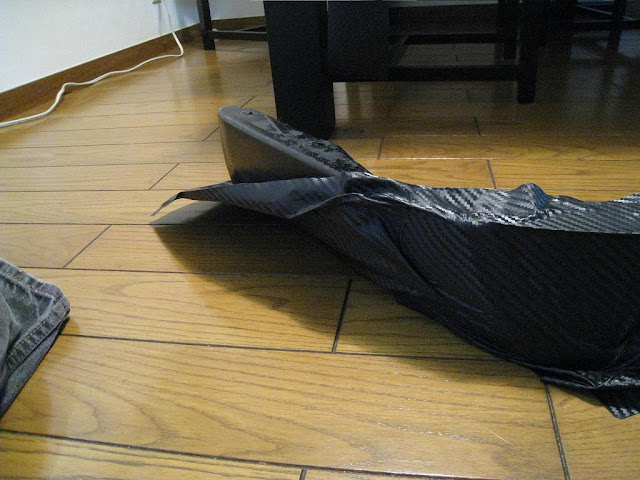 Resulting in this. Note the intake holes are still covered up. 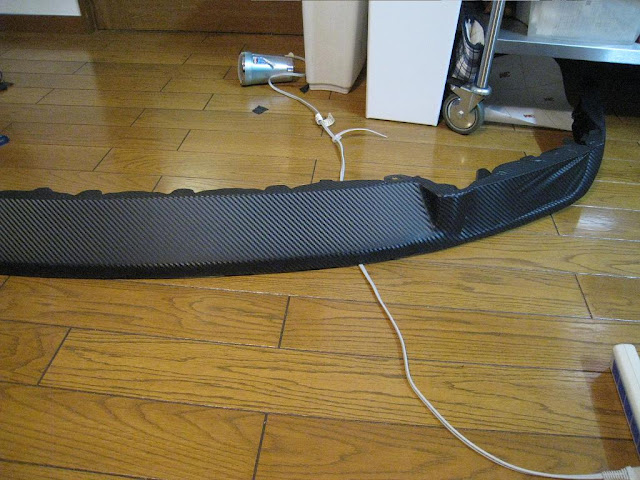 Finally, with some CAREFUL (but not careful enough!) cutting, I managed to poke through to the intake holes. I purposely cut horizontally quite near the top of the splitter, in order to end up with as much material on the bottom (so people looking down would see the material). What is not visible is that the vertical strake is not covered - I had to cut small pieces and wrap around those to complete the effect. 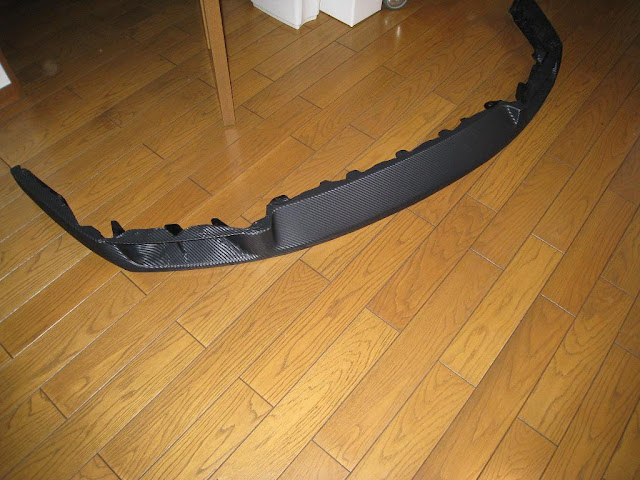 Unfortunately, stretching the material has its limits. A close inspection of both of the intake vents on both sides will either show some careful patching, or on the right side, some quite poor patching. I plan to fix this later...

But, from a distance, it looks ok. 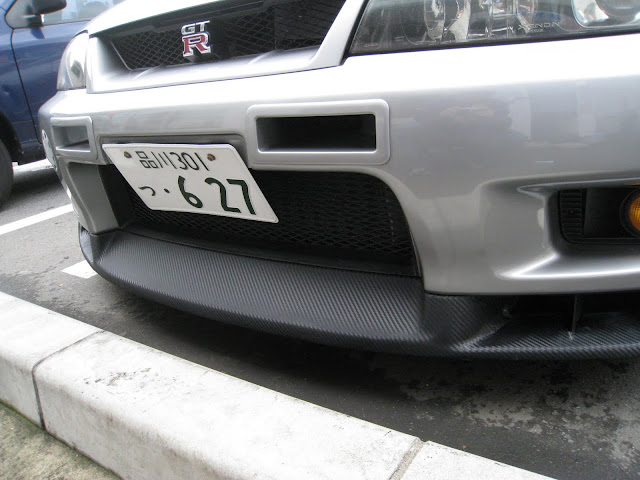 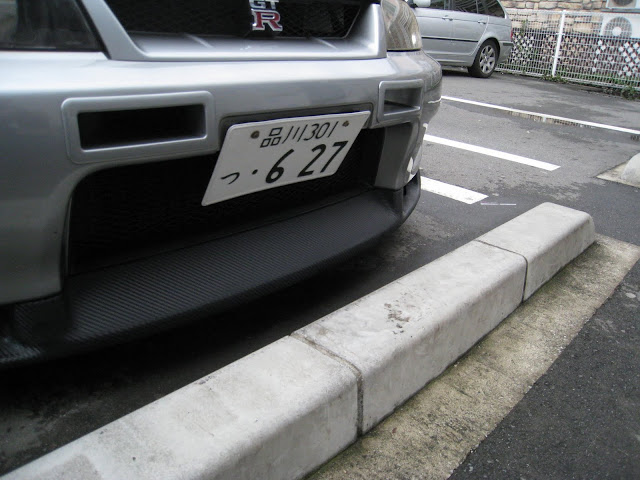 I wrote up some comments on this material on the GTROC UK forum as well:
http://www.gtr.co.uk/forum/135555-carbon-centre-blade-vinyl.html
Posted by Aki at 1:03 AM