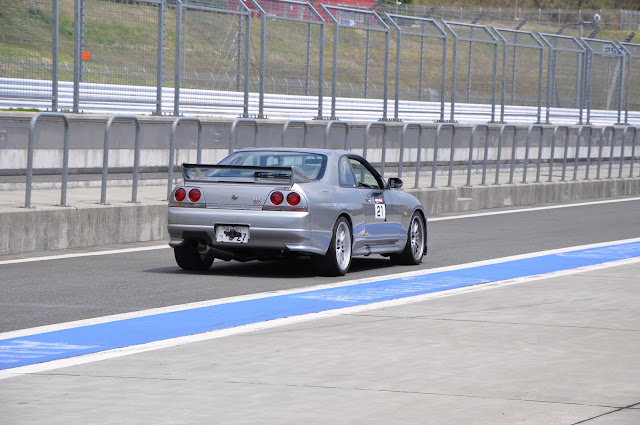 This past Sunday, was joined by my friends Miguel and Alex at the Skyline Sports Club Tokyo (“SSCT”) trackday at Fuji Speedway, on the Racing Course. Miguel in his RX-7, and Alex in his R32 GT-R.

Weather was absolutely gorgeous! Quite a welcome reprieve from the usual rainy weather we’ve been having lately. There were about 50 cars (mostly RB26 GT-Rs!) in total, making for a very crowded track at times!

We checked in at 0830, then began to get our cars ready for the one hour run beginning at 1100. For Alex, we decided to try something different – so we fitted some BF Goodrich slicks on 17 inch black rims (remember my project wheels – that’s who I sold them too…) to see if it would make a difference. Although last time, Alex drove the racing course in an amazing 2’13, not bad at all for a first timer!

During the prep, I got a call from my friend Sumi-san, who offered to stop by and “study” – what exactly, I had no idea.

He surprised us by bringing along a datalogger (which he put in Miguel’s FD – fair to compare after all as it’s FR just like his Silvia). He also agreed to take photos with my Nikon (thank you again, Sumi-san! Arigato!) So all photos here are his work!

Once we got the prep work finished (just barely in time), we lined up and entered the pit lane. 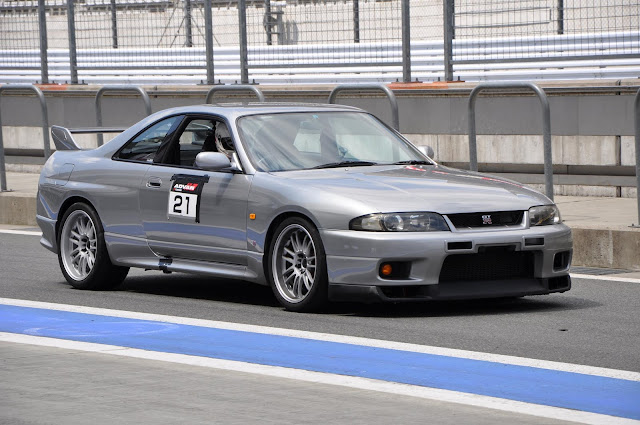 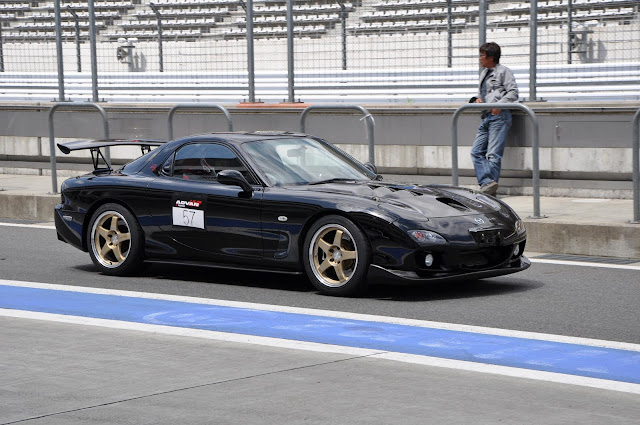 Here we are, lined up ready to go! 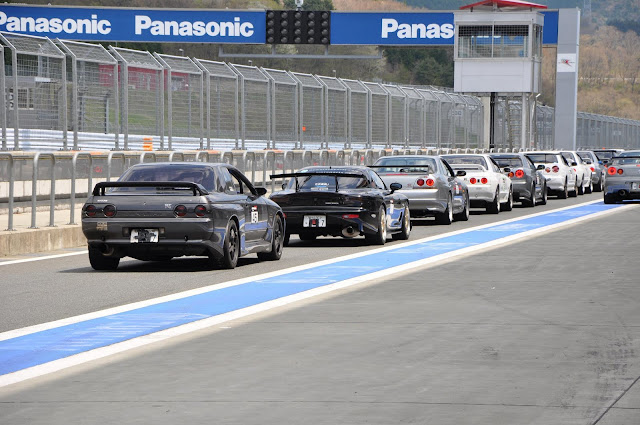 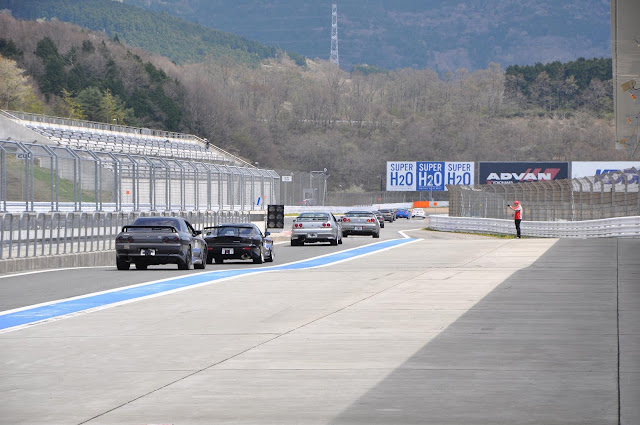 I decided to run the DFVs on the medium (10 of 20 clicks – the “windy road”) setting, hoping that this would work well with the 18 inch S-tires on the RE30s. On the drive to Fuji Speedway on the same S-tires, the ride had been fairly stiff, so given Fuji’s high speeds, I though the setting might work.

Once we started the run, the car was much better controlled than before on the S-tunes, but I could tell that the springs were a bit soft and the compression needed to be upped. However, the change in the car’s general behavior was dramatic. For one, I could no longer do the “left foot brake tap” at Netz corner (causing the car’s nose to dive to the front, shifting the weight of the car on the front steering wheels very quickly), forcing me to try a quick trail-braking and downshifting in midcorner instead. But, on the long smooth sweepers, the car was amazingly stable, and I could feel what the car was doing so much better than before. It’s not as direct/hard as a race car, of course, but this time around I could really sense how the S-tires were heating up and getting loose, progressively, lap after lap. With the S-tunes, I’d really only notice the tires getting too heated up and inflated only when I started losing the back end in sharper corners. In retrospect, that’s how vague the feedback was I guess.

In terms of setting my best time ever at Fuji, unfortunately there was probably too much traffic, (50 cars) and I don't think I ever had one lap where I could go full out. Same with Miguel and Alex. So, I pitted twice – once because I had told the guys I would do so, the second time to adjust the DFVs and reduce air pressure in the tires. I reset the DFVs for a much harder setting, 2 clicks from max up front, and 3 clicks from max in the rear. In retrospect, maybe no clicks or 1 click back might have been ideal.

Back on the track, the car immediately felt even more stable and more communicative. However, now I was dealing with another problem – the brakes. The PFCs rotors are very good, and the pads too, but for some reason felt like they had begun to fade halfway through the session - usually they last me until the last 5 minutes. I later discovered that the air cooling hose had been torn in two…again! So it wasn't the rotors, it was most likely the fluid! I need to figure something out here. So my driving for the rest of the session was tempered, in that I was not about to exceed the remaining capacity of the brakes. Credit to PFC, the brakes FELT mushy, not as immediate as before, but still worked to haul me down from 260kph plus!

No way I am passing the Jun car - he's pitting. 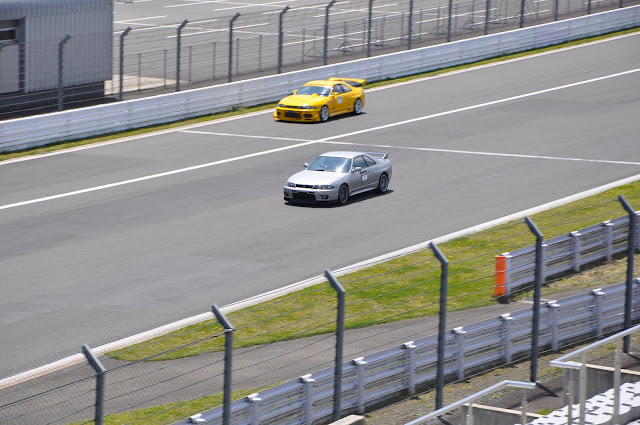 It can be lonely on the straight... 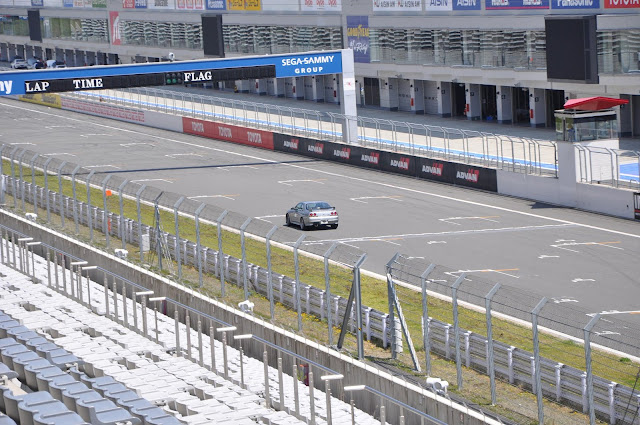 Afterwards – Miguel reported something wrong with his LSD, and Alex claimed he needed new brakes. Apparently he cooked his brakes and ran off course a few times. Can’t wait for THAT video to make the YouTube rounds!

On the way home – I had forgotten to set the DFVs on their “windy” setting – which made for a really punishing ride, even on Japan’s super smooth expressways. Amazing what 8 clicks does!

So in summary – on the race track, the Ohlins DFVs performed without issue, the suspension was stable at all times, even though I now think the springs are slightly soft after all. Well, that will be taken care of at the first rebuild. Amazing when the engine and suspension are working well, really highlights the weaknesses of my car - lack of a proper LSD (both front and rear) and bigger brakes. or perhaps a brake cooling issue. Water temp did not get beyond the halfway point, and on the cool down lap came down to 1/3! Oil never exceeded 100C, so the oil cooler is working well too...

It amazes me time and time again – no matter how well you think you have your car set up, at the track there is ALWAYS something that happens and becomes a take home lesson…

Some fun photos:
Check out Tobe-san in his UNISIA JECS replica R32 DRIFTING in this corner! 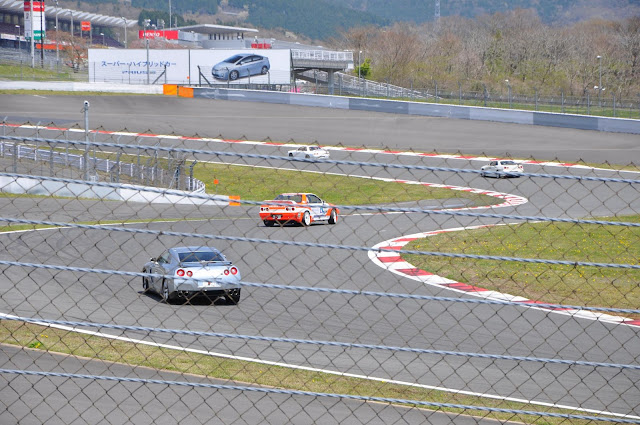 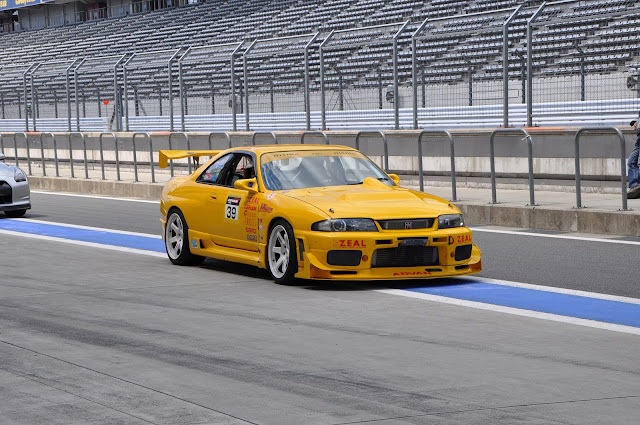 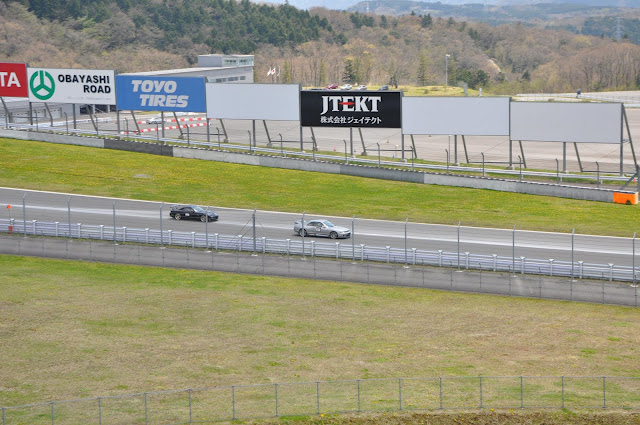 But I found myself easily passed by Miguel right after the above photo was taken. Took a while, but eventually caught up to him, here I am attacking the first corner, with Miguel right in front of me: 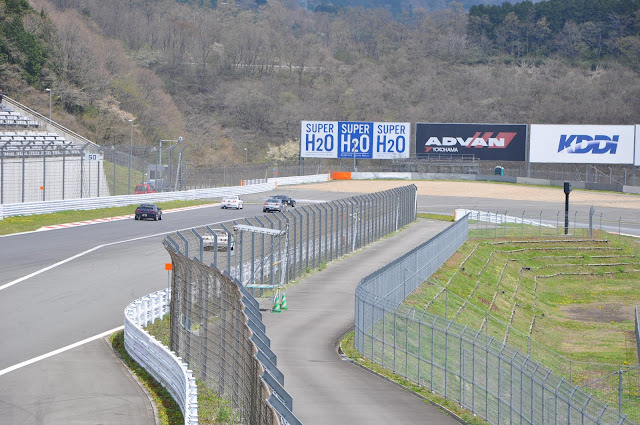 It's not a race, but slower traffic DID slow him down: 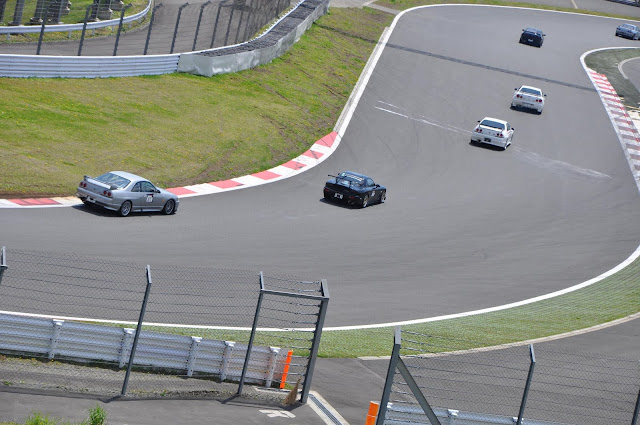 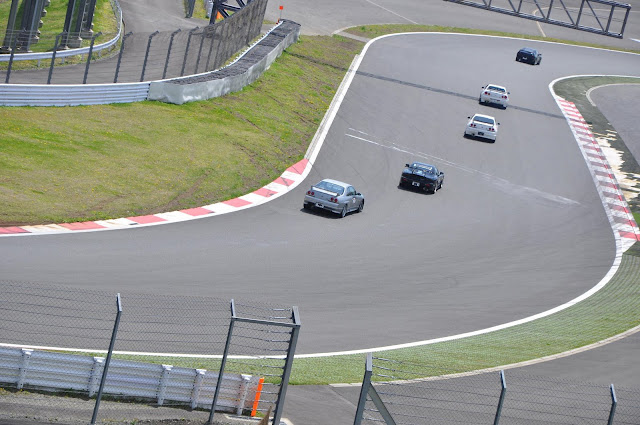 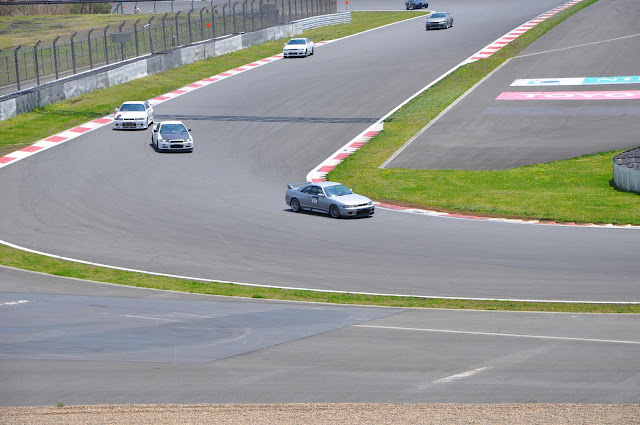 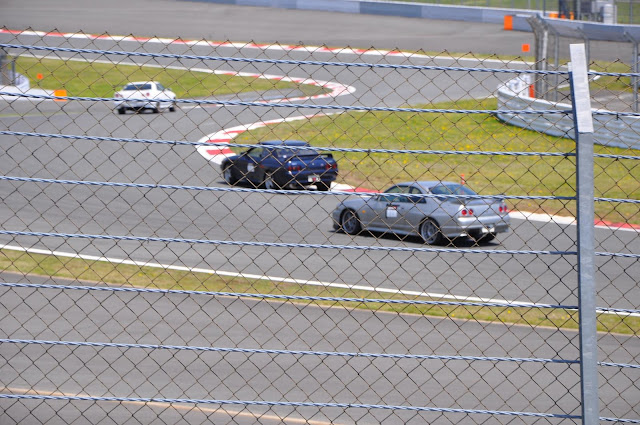 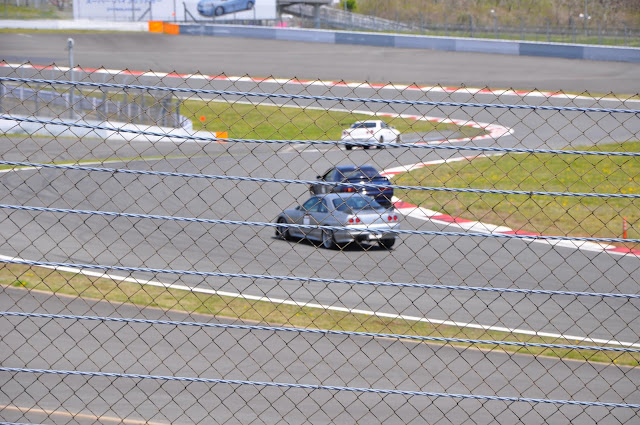 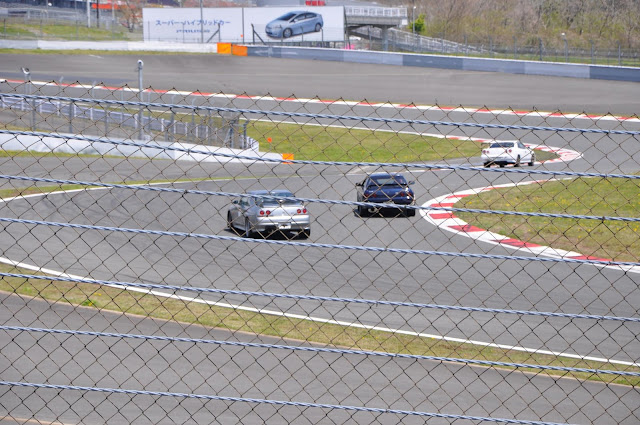 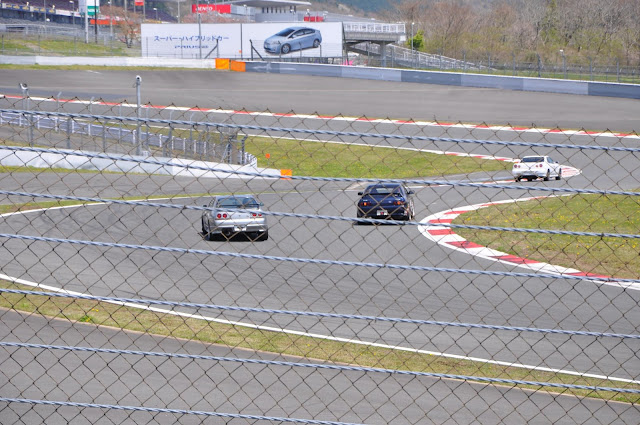 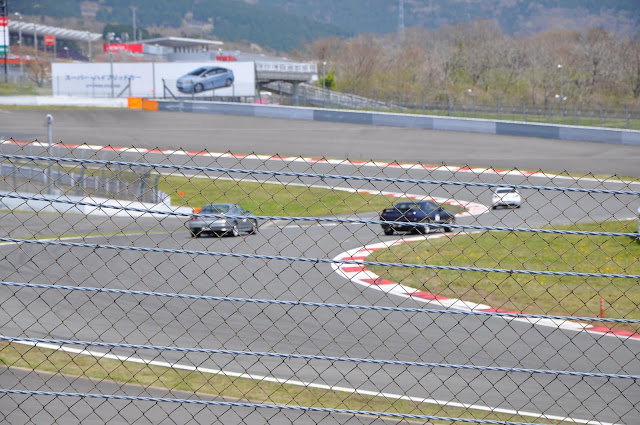 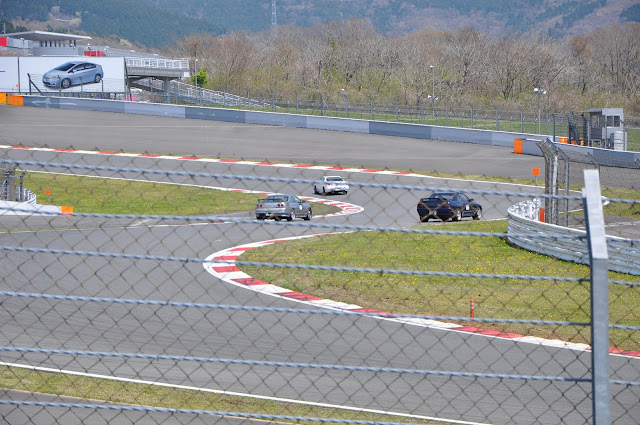 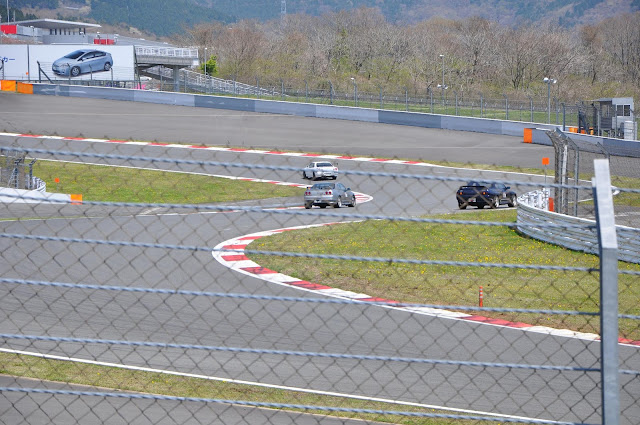 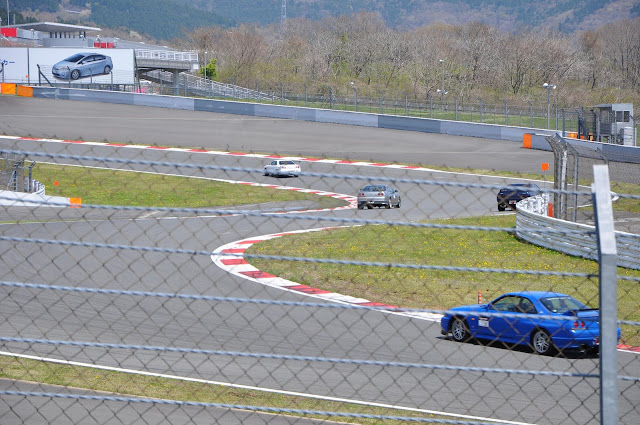