Surprise and some Re-Wiring

Recently I've begun to think that my car's dampers - Nismo S-Tunes, while perfectly adequate for the road, would eventually require replacement with something more track worthy. At least, higher spec and adjustable - some higher grade coilovers.

Imagine my surpise when this weekend, just after I had spoken with Honda-san and Prince Nissan Shinagawa about an eventual upgrade, I logged onto Yahoo Auctions and found a set of Ohlins DFVs for an unbelievable low price - the first used ones I had ever seen.

The selling owner said he used to have an R33 GTR, and had outfitted the DFVs, only to find the ride harder than he thought. He swapped out, only to discover that the DFVs were better all around, and was about to swap them back when his car got stolen! So, with only about 5000kms, these units were in pretty good shape. After conferring with my friend and suspension expert Sumi-san, I decided to take a chance - after all the price was less than half of buying them new. If they turned out to be duds, then I could always have them rebuilt for about 20,000 yen each. And still pay less than a new set!

So when I got home today, this is what I found waiting for me! 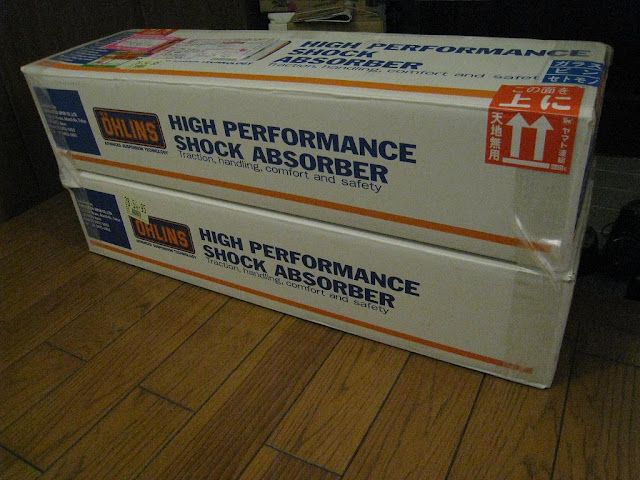 Ohlins does not produce a model for the BCNR33 specifically - however the BNR34 units can be used without issue (I think there is an adapter, I have to check). 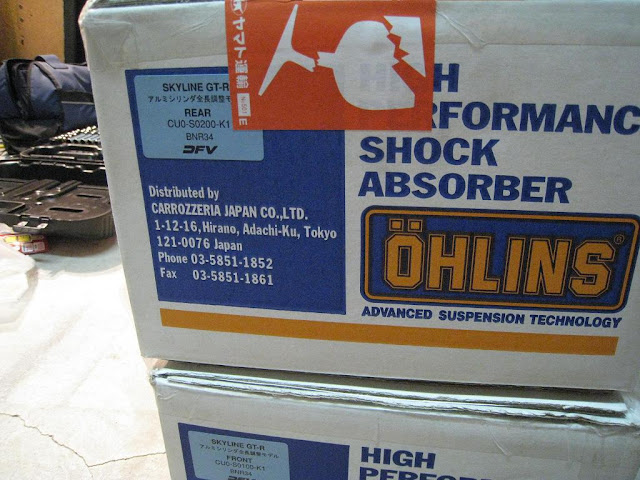 After verifying all the pieces appeared to have arrived, I set upon continuing my other project - rewiring the tweeter wiring. When I got the stereo/navi installed when I first bought the car, they had installed the tweeters on double stick tape, on the dashboard. After deciding that the tweeters would look better if I mounted them on the door, I took the door apart, only to discover that the wiring for the tweeters ran on a separate line to the center of the dash.

So doing some research on the Pioneer car stereo website, I found that there SHOULD be a crossover amp somewhere. So today, I decided to delve into the mess of wires behind the stereo, to find them. Appears they didn't bother shortening the wiring, just stuck it all there behind the stereo. What a mess. 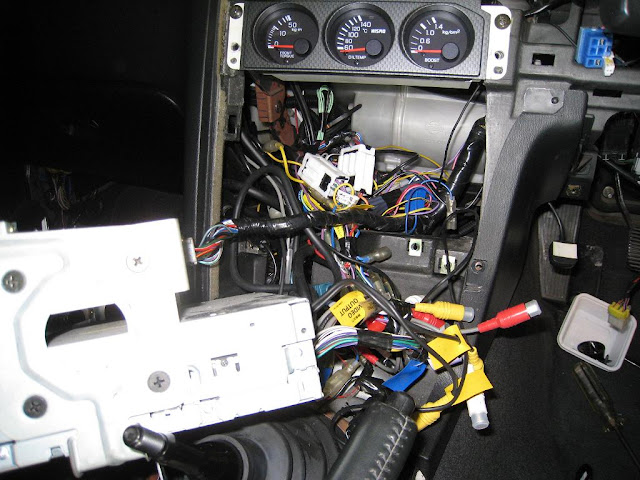 After some careful digging, I did find the crossovers - here in clear plastic, with the red capacitors. 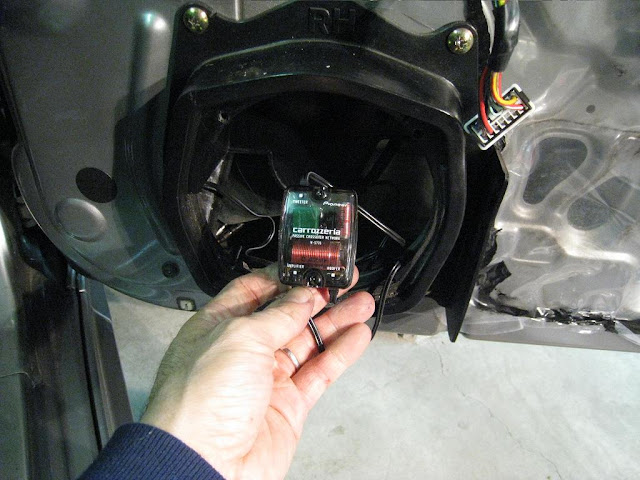 Tomorrow, I will work on the left side, and then figure out how to securely mount the crossovers inside the doors. Then reassemble the stereo and the wiring (one day I will remove the excess, but not this time around...to keep the larger RCA type cables clean, will have to purchase shorter cables), and put the center stack back together.

Last, I will affix the tweeters to their new location. But this will probably be during the week next week, as this weekend I am determined to do a few things to get ready for the upcoming SSCT track day on the 25th!
Posted by Aki at 11:21 PM