So take a close look at this. 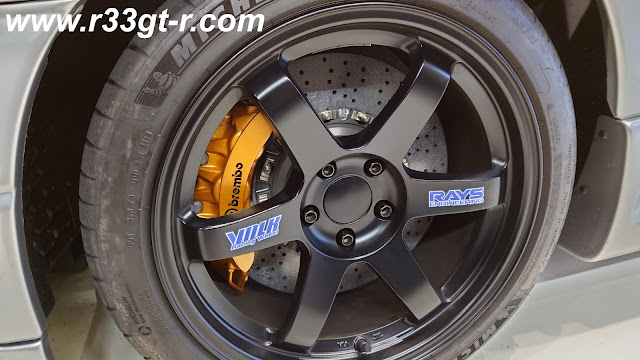 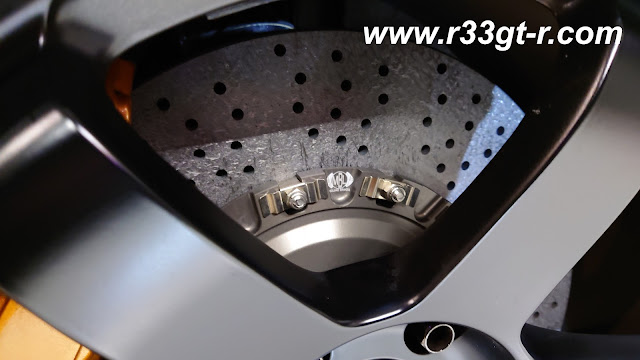 Yes my friends, it is a carbon ceramic rotor! As you saw from the Speedhunters post (note, I wrote this article and the SH post at about the same time, hence a lot of repetition between the articles), I just got these installed at Mine's during my visit there, and let me tell you - they are absolutely fantastic! A game changer.  Basically, all of my mods I think have been evolutionary in nature - one dimensional. So improve engine breathability or exhaust for more power; or increase body rigidity to make handling better; or improve the interior to modernize.

But this is the first mod I can recall, that improves handling, acceleration, AND braking. So perhaps a revolutionary mod?

So here is the background - it took over a year from inception to delivery, but it was well worth it.  A fellow R33 GT-R owner (Matt J) - crazy machine, more modded than mine - in the UK told me he was running carbon ceramic disks (his sizes are 343 and 330, I think). Naturally, I had been toying with grabbing some R35 Spec V carbon ceramic rotors I had seen on Yahoo Auctions, but everyone I talked to - Nismo guys included - recommended against it.  Apparently the Spec V rotors were not as good as they could be? Apparently they are noisy and require warming up before they start biting well.

It was at this time that Matt let me know that he had gotten carbon ceramic rotors for his R33 from Simon at Midland Brakes, and was kind enough to e-introduce me to Simon.  Simon claimed his company could produce a bespoke set of carbon ceramic rotors in any size up to 420mm, so naturally it meant I could keep the R35 calipers on my car, and simply have him reproduce the steel rotors in carbon ceramic.  Truth be told, I was not confident that the rotors would arrive and would bolt right up to my existing R35 rotor hats, so I also asked him to make me a custom set of rotor hats as well, and to have them all assembled together so I wouldn't have to bother doing so.

Anyway, here are some photos Simon sent me during the build. First, he showed me what was happening with the rotor hats: 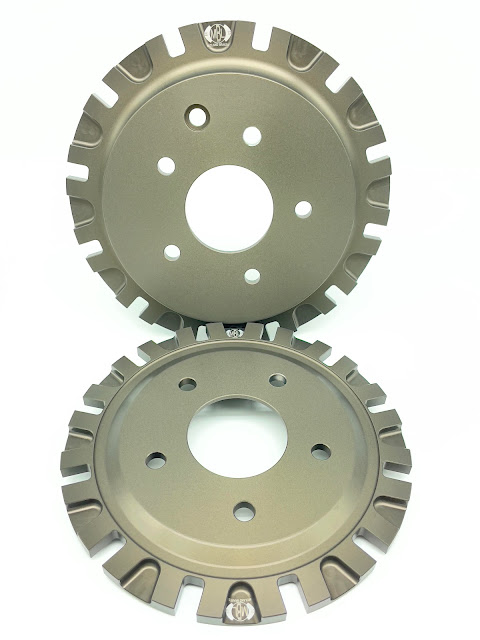 Then he sent me photos of the carbon ceramic rotors being made: 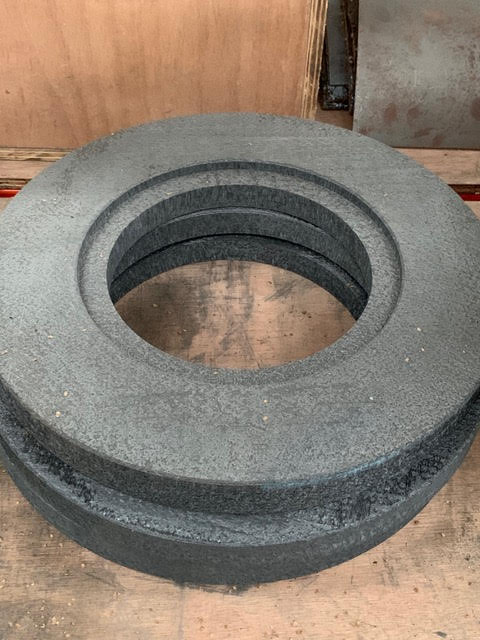 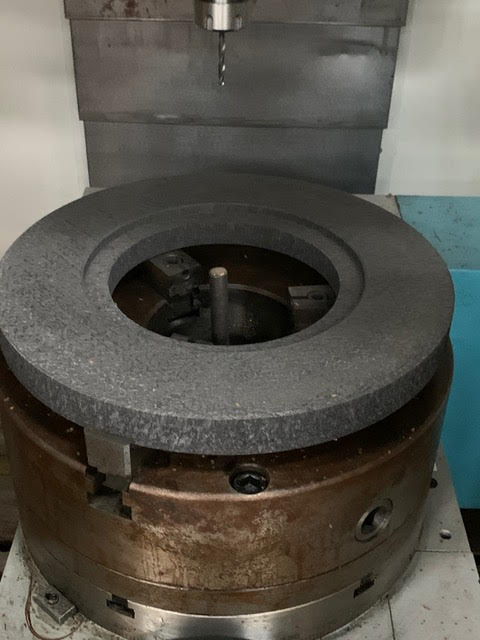 Once complete, he wanted to show me how light these rotors were, so Simon sent me the following as well:

Weight of rotors on scale, in kg. Front: 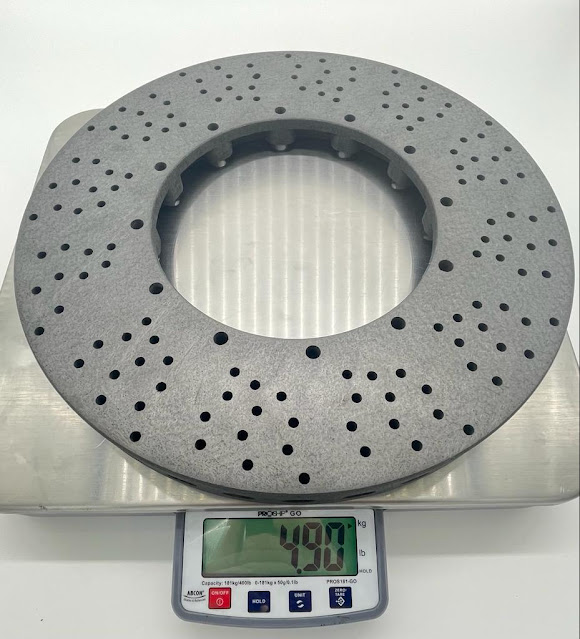 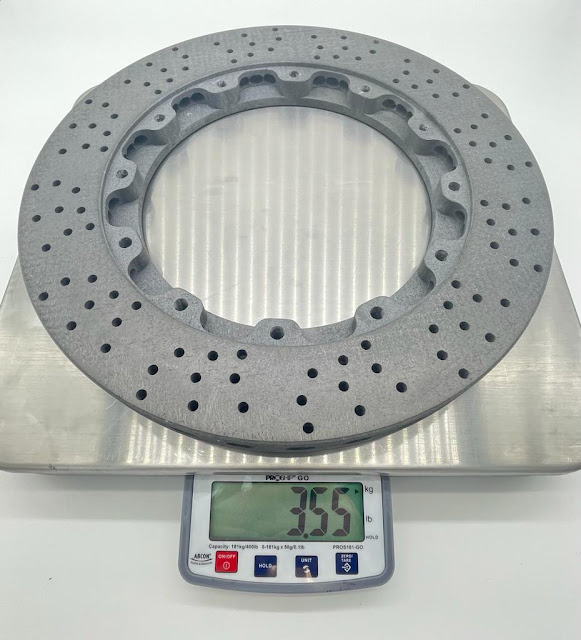 And then of course with the rotor hats fitted. Front: 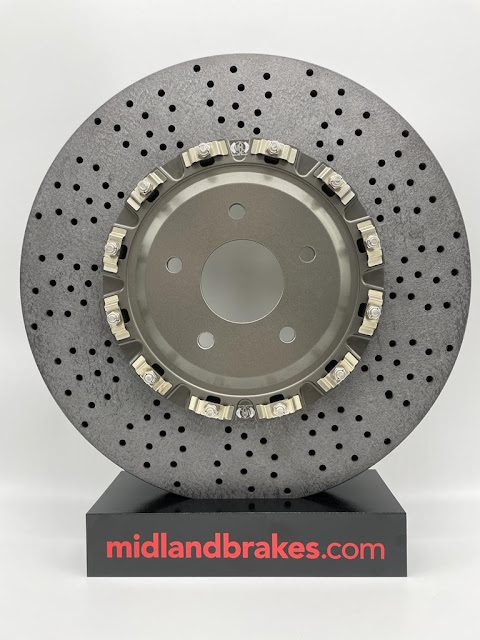 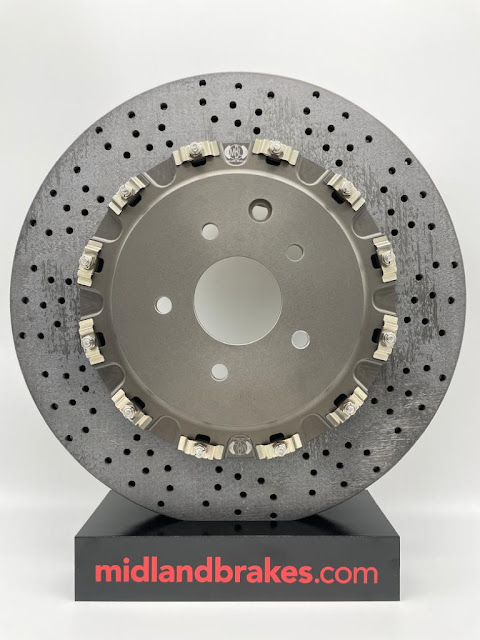 Front on top of rear, showing the backside of the rear rotor which works with the R33 parking brake! (It's not a steel ring like that I had Ninomiya-san insert when I first got the R35 brakes fitted. Can't believe it's been 10 years since I got the R35 brakes...) 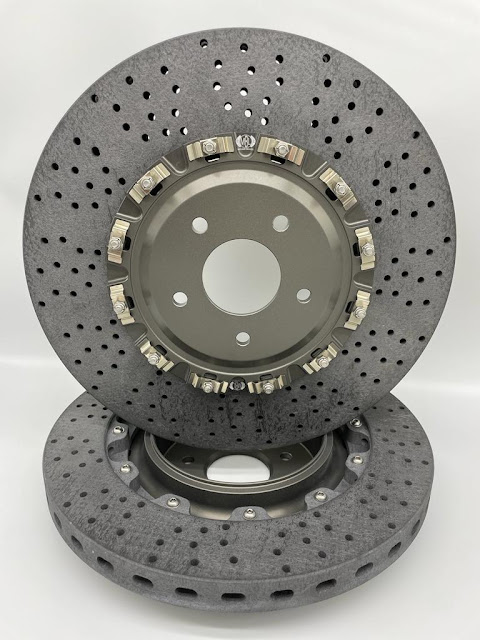 Flash forward and just a few weeks before I was set to go to Mine's for the new Silence-VX Titan III exhaust install, the rotors arrived in the mail. Perfect timing!  I was planning on doing the install myself, but figured I'd take them down to Mine's to see what Nakayama-san thought.

When I dropped the car off and showed him the rotors, he was a bit skeptical.  He had dealt with UK companies before and apparently the quality was hit and miss (and unfortunately that has been my experience as well - even with parts from so called well known Skyline shops...who I will not name here).  Nevertheless he agreed to see if he could install the carbon ceramics.  I was half expecting a call with bad news - "sorry they don't fit" - but that call never came.

Rather, when I picked up the car after the install of the exhaust, R35 injectors and R35 AFMs, the first words out of Nakayama-san's mouth were - "where did you get these rotors again? Can you introduce us to him?"

In other words, the guys at Mine's were very impressed.  Indeed, Niikura-san magically appeared and also started asking me who made them, where the company was located, how much, etc. And that after Nakayama-san had fitted them and broken them in, given Nakayama-san's rave reviews, he had also driven my car to see how they were - and pronounced them spectacular (although now, he could feel that my car was having some torque steer! Nakayama-san told me later this is a common issue on 33s)!  Nakayama-san agreed, saying these were the best they had ever come across, as they were always testing carbon ceramic rotors but had never found a set they liked.  He told me he had weighed the stock R35 rotors and hats, which came in at about 13kgs, but these carbon ceramics with hats were only 6kgs, resulting in unsprung weight loss of about 7kg per corner! 6kgs is lighter than the steel OEM R33 GTR Brembo rotors, which I think weighed about 9kgs each!

As I described in the Speedhunters post, I initially thought that I would have to lower the spring rates for the Ohlins coilovers, but Nakayama-san assured me they were fine as is. And after having now gotten used to how the car is, I have to agree. However the benefits of the reduced unsprung weight continue to impress me - the handling is light, yet communicative; with reduced rolling resistance the car accelerates now with a new fury, making it easy to get wheelspin in second and third gears, in addition to quicker starts from stop. As for braking, if there was any small complaint, it would be that these don't have the quick initial bite that I recall the old steel rotors having, but it is still very close.  And this is something I will work on improving, hopefully with some assistance from Simon and Mine's.

Incidentally, the guys at Mine's weren't the only pros who were impressed. When I dropped off my car Nismo Omori Factory right before year end, I had Ochiai-san drive my car and he was similarly impressed, although he said he could feel a slight judder - but nothing that further breaking in would not fix.  Otherwise, he said he was surprised at how natural the brakes felt, and how stopping power seemed to be without issue.

So next steps... honestly not much more I can do with the brakes (except maybe experiment with different brake fluids) but Nakayama-san did hint he had a few more tricks up his sleeve that he promised would make my car even more responsive than it is currently.  Even though he told me my car is now "scary fast" and I have to agree with that assessment.

There is also the issue of having enough mods to do that are Speedhunters worthy, but I will worry about that when the time comes.

Some very inspirational content as always. May I ask how much approximately did the ceramic rotors + hats cost per corner?

let's just say one could easily buy a used Kei car here in Japan for what I spent. Or you could probably spend about the same and get the R35 kit from Nismo. I would suggest contacting Simon at Midland Brakes for the most up to date pricing, however!

Thanks for the HU hehe. Understandable, I estimated it would be close to the R35 brake it based on prices of other similar rotors on the market. Irrespective of price this solution is definitely food for thought.

Wow!! That is truly amazing. I have always been toying with the idea of carbon ceramic brake rotors, but OEM parts only come in huge sizes that don't fit my wheel. With a custom setup, this might be it!

I'm only worried about cold brake performance, how well they respond for general street driving, and how to match brake pads for these.

Matt -reach out to Simon and ask him. Since it has been really cold here lately, I THINK the initial bite might not be as good, but I think generally HK is warmer, plus you can adapt your driving style to fit I think. But these really should be used for track/touge runs, and as this link shows, you should also be thinking about thermal capacity.
https://www.youtube.com/watch?v=-EzkKmZExD8

Thank you for sharing the YouTube video, it was very informative. I will definitely reach out to Simon and Midland Brakes when the time comes.

What's happened to the domain? I can't get to the website properly.

Yeah, it appears that eNOM which is the domain registry, was down for a couple of days. Scared me too. Not sure how you were able to access and post the comment, however! Thanks!

Used the cached version of the site on Google to get to the comments which are through a different domain.

aha! genius. Should have thought of that. Thanks!