So as I mentioned in the first of these Mine's visit posts, the Silence-VX Pro Titan III was not the only Mine's part I decided my car needed.

You can already tell that it contains "SBC" and "ESC" so: 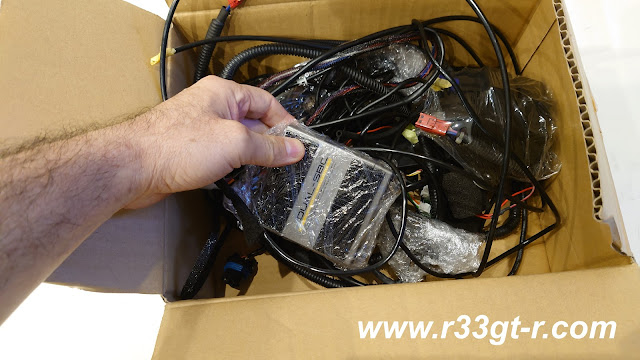 And yes, not surprisingly, they made sure to wrap up the important pieces in plastic. So they don't get scratched up. Why? Because Japan...

So yes, they removed my old Blitz Dual-SBC boost controller for a newer unit by HKS, their EVC7: 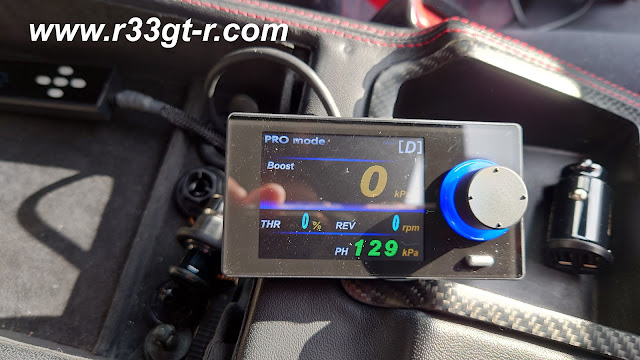 Frankly, I'm not sure how this improves control of the turbos, except the interface seems to be much more user friendly.  Maybe more precise control? Although when I picked up the car I vaguely remember Nakayama-san saying something about setting up different boost settings and that he decided that at the maximum boost setting the car felt too fast and so he dialed it down one notch.(!) Actually I found this comparison chart but maybe one of you guys can sum it up for me.

Blitz E-ESC, electronic exhaust sound controller. This was the electric valve I referred to in my previous post. 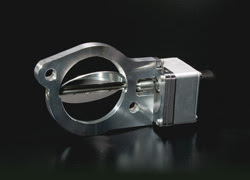 And here is a video of the effect it had on the sound of the Tomei.

Also, they gave me back all of the Tomei Expreme Titanium - in pieces (it is not a one piece design, like the Mine's is), all nicely wrapped up!

Ok so the exhaust and exhaust value were obvious, given my previous blog post. How about this - the engine bay, how it used to look: 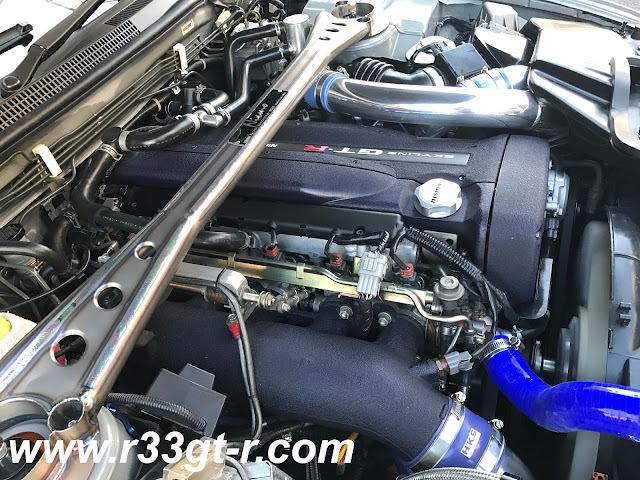 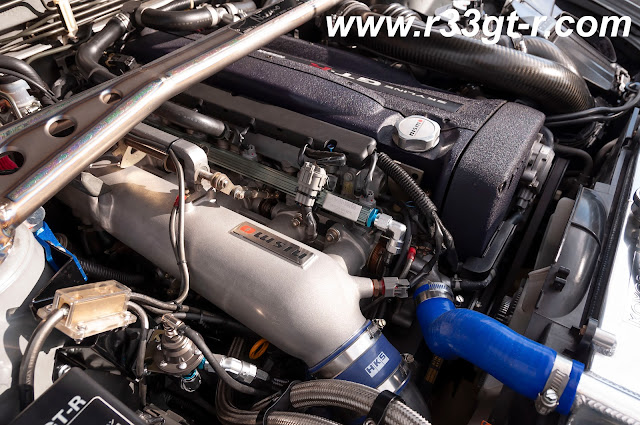 I changed out the OEM plenum, complete with the Mine's crinkle coating, for a non-crinkle coated Nismo plenum. I've always thought this part looked great just the way it is, and by limiting the crinkle coating to the engine, I think it actually further emphasizes the engine itself although strangely maybe it makes the engine bay look a bit busy?

Of course, if the plenum is replaced, other stuff is going on too. 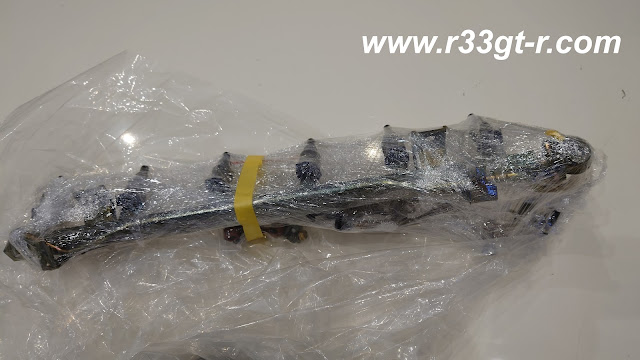 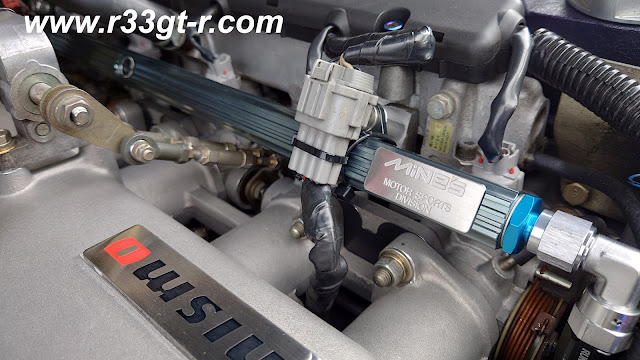 If you look at the Mine's website, you will see that they advertise this bit of kit showing all the fuel lines on the topside - Nakayama-san told me some owners like to be able to show off, when the hood/bonnet is opened, that they have this new set up installed and so opt to have the fuel lines routed as follows:

Not me, I like the more subtle look of the fuel lines all tucked away.

Of course, with new injectors you should run new Air Flow Meters (some people may disagree, I am just letting Mine's and Nakayama-san install what they have perfected over the years) so these old Mine's units came off: 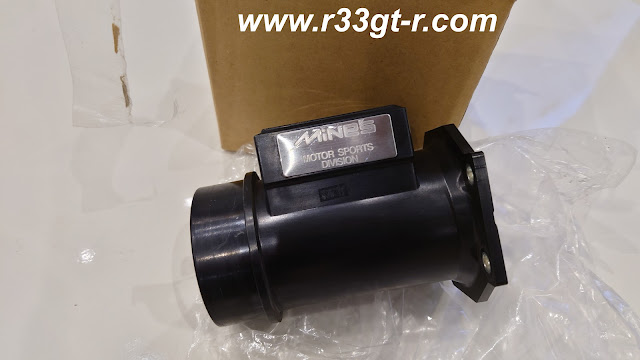 To be replaced by the modern and thus much more accurate R35 ones. OEM parts FTW, I say!

And with new injectors and AFMs, Mine's installed a new custom VX-ROM for me (I know because Nakayama-san told me about he himself setting it up out on the road). So how does it all work together?

First, I don't know why, but the engine starts up much easier. Even Ochiai-san at Nismo commented on this (yes another Nismo post coming soon!).  Second, throttle response with the new R35 injectors, along with more volume in the Nismo plenum, results in very crisp, instant response.  To be honest, it was very good before, but I feel like it's even more precise. Surgical?

Strangely, the exhaust still stinks, although not chokingly bad as before.  Maybe it can't be helped with these engines but I was hoping for cleaner fuel burning due to better fuel atomization from the 12 holes.

I will post a sound clip of the Mine's exhaust soon, but it is fairly quiet. Still loud compared to the Lexus or the average car, but much more refined and therefore tolerable.

Power-wise, because of the more accurate throttle play, I feel like the car is more lively, and even with the new exhaust, which may be slightly more restrictive, I never felt like the car was down on power.  So with better response and no perceptible change in power, (Nakayama-san grinned knowingly when I told him this), I am VERY satisfied at how this upgrade turned out!  Although come next year sometime, Nakayama-san is promising me another powertrain upgrade which he thinks will make the engine even more responsive!

There is however one more pre-arranged modification I had Mine's do.  I will publish that as soon as the Speedhunters article (working title - Return of Project 33) comes out, which now appears to be next month. If I do not see it get published by then, then I will go ahead and update the blog accordingly - you guys should not have to wait for that to find out what is really going on!

Awesome updates to an already amazing engine! I've been using R35 injectors and R35 airflow sensors for 6 years now. No complaints at all! I noticed a smoother rev through the RPM range, and more stable engine RPM on cold starts.

As for the different red O on the Nismo badge, get the newer Nismo engine oil cap with ratchet design. Perfect torque for tightening each time, and also allows you to perfectly align the Nismo logo afterwards!

Hey Matt - well obviously you are an Early Adaptor while I dragged my feet on this...Have to say you nailed it. Smoother revs, and easier start up!

I may start debadging all excess free advertising on my car lol...will look into the new ratchet design oil cap next time I am at Nismo, however!

The reason why the R35 injectors allow for cleaner cold starts is that the finer atomization allows for more fuel to evaporate in time for combustion. When the engine is cold it is really hard for fuel to evaporate properly and only fuel in the vapor state can participate in combustion, liquid fuel doesn't burn. The R35 injectors are almost as good as it gets for atomization. I believe only the Bosch 997.1 Turbo/GT2 injectors are higher flow with comparable performance and the difference in flow rate is only about ~60 cc/min. If Mine's has really, really done their homework when tuning they should be dialing back the cold start enrichment a little bit to take advantage of the improved fuel atomization.

The R35 MAFs should have better transient response, the OEM hot wire MAFs don't have any design elements to handle reversion flow so they can double-count air that goes backwards for whatever reason before going back into the engine. One case could be a bit of reversion that occurs from suddenly snapping the throttle shut on boost, even though the factory BOV is supposed to prevent all reversion. The R35 MAF has special one-way flow paths to only measure air going into the engine and not back out to avoid this double-count issue. At the ECU level this is handled with minimum and maximum load clamping in transients but that's not as good as fixing it at the sensor level. GM engineers resolved this issue by using the MAF sensor to generate a live volumetric efficiency value for the engine in steady state (you know the displacement of the engine, so you know how much cylinder filling occurs based on the amount of air going through the MAF), then based upon the raw MAP signal and the engine VE table from experimental testing they can predict the dynamic airflow occurring. This strategy doesn't work very well with ITB engine like the RB26 though because the MAP signal is highly non-linear and doesn't correlate well with engine load.

It is also worth mentioning that with the way the factory Nissan ECU does math to determine engine load it is very important to match your injector flow rate to your MAF sensor flow capacity. Otherwise you will have to change pretty much every ECU table to get acceptable behavior. Changing injector flow rate and MAF together as a matched pair allows for the factory load scales to be used and therefore only fine-tuning is required in a few tables. Happy to walk you through the finer points of this if you're interested.

I am curious to know, do the Mine's R35 MAF adapters have the honeycomb airflow straighteners on them like the factory MAFs? To my knowledge the RB26 size is supposedly ok to use without them but if you increase the diameter of the pipe beyond that it is recommended.

As for how to solve the exhaust smell issue, it depends on when it occurs. If it's at cold start you can ask Mine's if they can try to fine-tune cold start enrichment. Any little bit of fuel they can pull out without causing a rough idle will reduce the amount of carbon monoxide and raw fuel coming out of the exhaust and increase how quickly it warms up. Of course it is also good to make sure your thermostat is OEM to help the coolant warm up. I would also ask if they have retained the cold start ignition retard found in the factory ECU tune, that will help warm up the catalytic converters faster although driving the car when cold will feel a little weird.

From there the mechanical changes get rather difficult rather quickly. You can install an exhaust heat recovery water jacket like what is used in the 2010-current Priuses to help heat up the coolant during cold start. Another option is a secondary air injection system that pumps fresh air into the exhaust. After combustion all the previously liquid fuel that didn't vaporize in time for combustion is definitely turned into vapor, so injecting a bit of fresh air into the exhaust manifolds can cause it to spontaneously burn and help heat up the catalytic converters.

If your problem is the exhaust has a smell even when everything is hot and running properly probably the best shot of resolving it is VCAM. It is very important to map it properly though, if cam advance is not used at cruise for internal EGR there will be very little emissions benefit.

Anonymous - WOW, your two comments are probably the BEST I have ever seen here! Thanks! Very educational and very interesting! Will ask Mine's the honeycomb question. The smell I was talking about was after the engine was warm actually, since I expect the GTR to stink at cold start. VCAM huh. Well, I guess that makes sense in terms of what could be next for the car.... Thanks again!

VCAM can help, but the thing I would look at first is to make sure that the AFR going into the catalyst is controlled well. If you have a Consult cable and something like Nissan Datascan you can monitor what the O2 sensor is reporting. It's a narrowband sensor so the data is limited but you're looking for the characteristic sawtooth pattern of rich/lean when the engine is warmed up and out of boost. If you see it going rich for extended periods when it shouldn't I would get the map touched up. If that doesn't resolve it you may need a new catalytic converter. Easiest way to tell is to put a narrowband O2 sensor after the catalytic converter and see if the waveform matches the pre-cat sensor.