So I have to admit to not posting much these past few months, because of course I was planning a few things for my car.  Of course I am busy at work too, but that excuse gets overused.

In any case, as I hinted in this post from September,  there are some newer parts at Mine's that I have been interested in lately that I think will help to further improve the car (yeah, it never ends...).  One of these of course is their new Silence-VX Pro Titan III exhaust:

So even though several years ago, through connections at Tomei Powered, I was lucky enough that my car was used as the jig for their Expreme Ti full titanium (off-road spec) exhaust system, and further lucky enough to have my car featured in their catalog, it was time for a change.

Change in that there was nothing wrong with the exhaust. It was just loud. Very loud. Clearly designed for the racetrack such that I could feel how free-flowing it was.  Unfortunately some shops in Japan (like Nissan Prince Tokyo Motorsports Division and Nismo Omori Factory) will usually refuse to work on cars that do not have JASMA certified (and thus street legal) exhaust systems.  Never mind it was always a problem starting up my car on an early weekend morning in order to go for a nice drive.  As readers know, I ended up installing not just an electric valve to try to muffle the sound for in-town use, I eventually even installed an aftermarket exhaust bung as well. This allowed me to get down to close to street legal levels, after which Omori Factory kindly chose to not make a big issue of the legality of the exhaust...

In the past, I had told the guys at Mine's that there was bound to be demand for their titanium exhausts from 33 owners, which until recently were available only for 32s and 34s. So I was pleasantly surprised to first get a phone call from Takayanagi-san of Mine's giving me a heads up that they had developed one for the 33 due to popular demand, and then thrilled when during my earlier visit to Mine's Nakayama-san promised me that I would be one of the first, if not the first, r33 customer to have this new titanium exhaust installed!

Flash forward to a few weeks ago, when we had arranged for me to drop off the car.  For posterity, I wanted to record what the Tomei sounded like, so...

And then of course Nakayama-san again took my car into the famed garage.

And then the fun began!

So it seemed like I was the only customer that day - yes, I felt special, like this was a historical moment! In any case, I wanted to test fit the new exhaust, just to see how it looked. 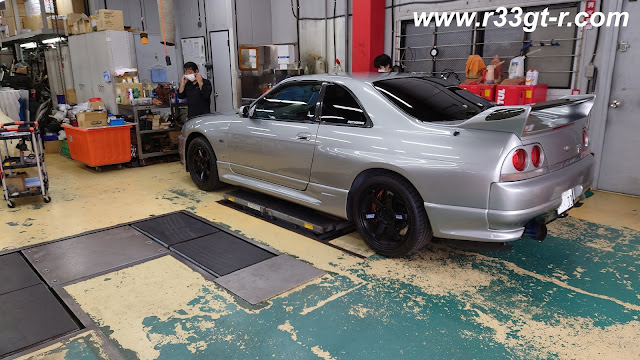 While a couple of the Mine's mechanics began to prep the 33 so they could unbolt the Tomei from the car, Nakayama-san gleefully opened up a very long box. 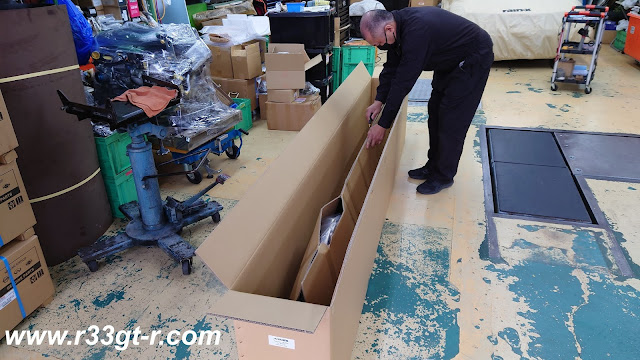 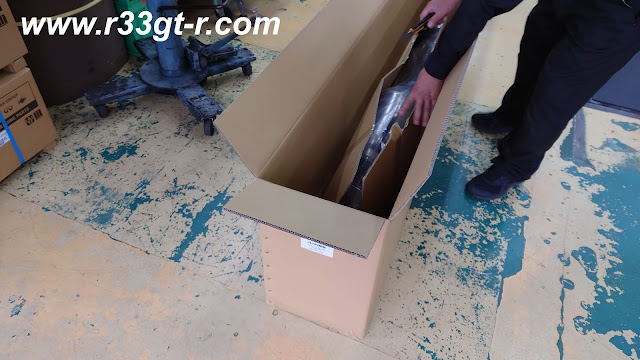 And pulled out a very large, very beautiful piece of art! 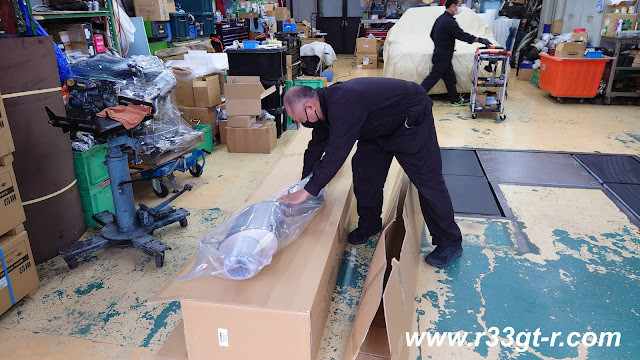 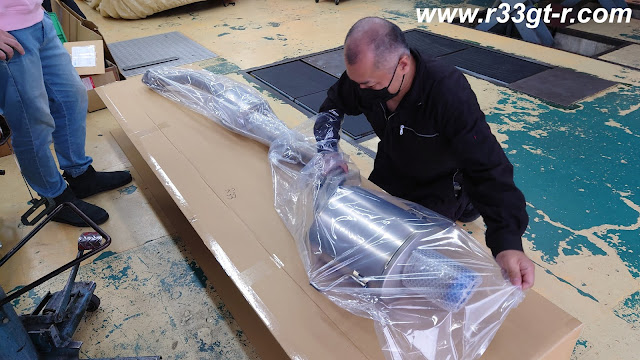 Look who happened to be in the neighborhood.  Of course he had to take advantage of this instant so 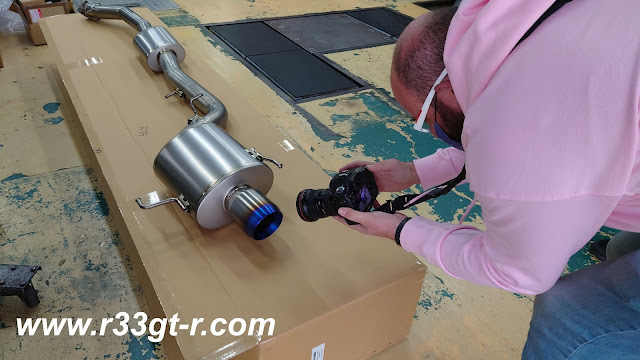 He was mumbling something about Speedhunters. I guess we will eventually find out if this photo gets published on SH.
I'm no pro, but here is my photo taken with my Sony Xperia 1 Mark III: 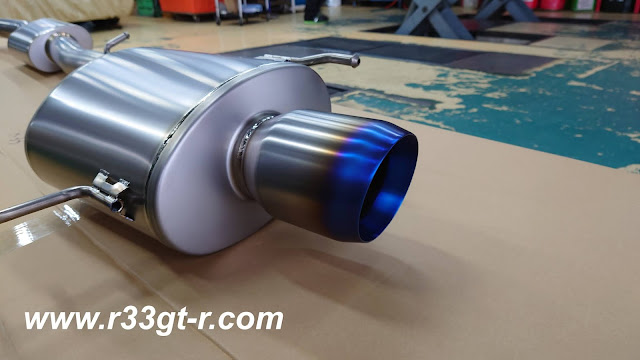 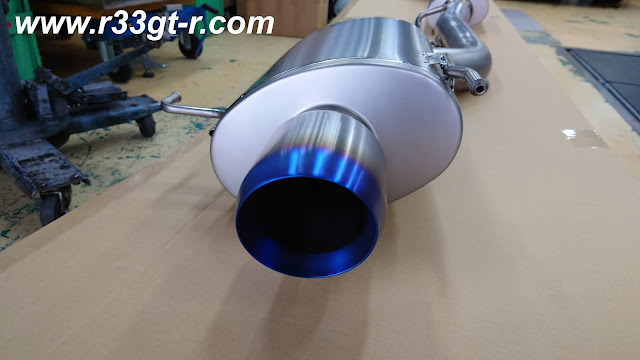 Very tasty!
Meanwhile the other mechanics had jacked my car up, and were trying to figure out how to remove the diffuser. 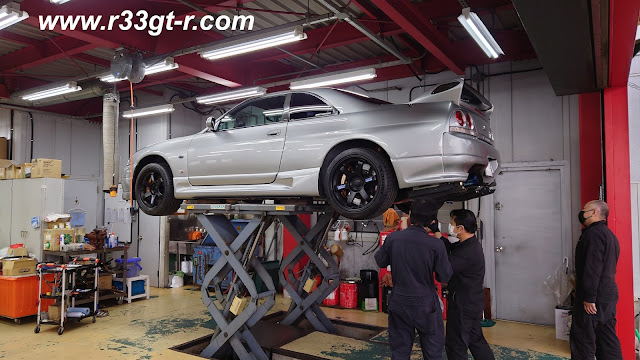 A few bolts here and there, and voila! 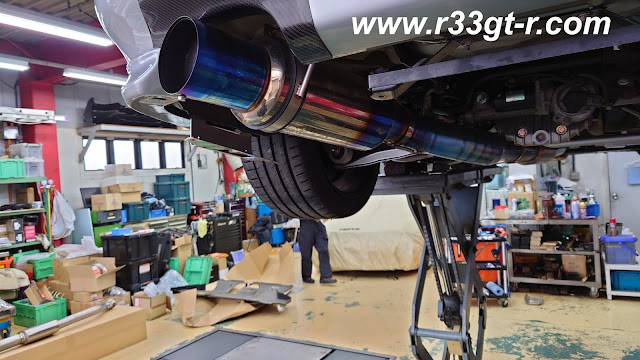 After which it was relatively easy to remove the Tomei exhaust, and temporarily install the Silence-VX 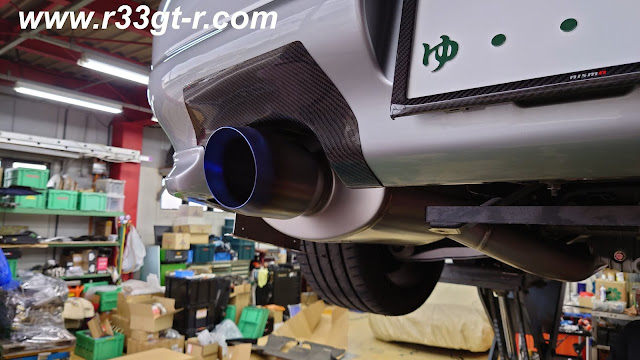 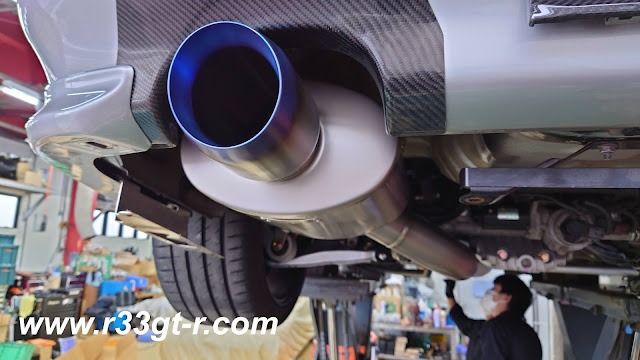 I say temporarily because, unfortunately there seemed to be a clearance problem caused by both the diffuser brackets and the extra oil capacity rear diff cover.

Realizing that this issue wasn't going to be solved in the next few minutes, and because I had asked Mine's to install some other tasty bits, I then decided to go home and save a few hundred yen by hitching a ride with Mr. Dalle Carbonare to the nearest train station.

In my next post, I'll discuss some of the other parts that got removed and the new ones that got installed. Stay tuned!

Curious to know how you get on with that exhaust. I've been noodling about what to do there for a while now, it would be nice to have something relatively quiet but high flow and well-designed/manufactured.

Anonymous - well, to put it simply, Extremely Satisfied. Much quieter and yet has the bazooka effect at high rpm. Can have conversations in the car now. But do not feel anything has been taken away from the engine at all. I think to compare, the tradeoff in loudness vs performance is neglible, but caveat that I did not do a before/after dyno run.

Looks like a great bit of kit Aki! Looking forward to hearing it. Hope all is well