Long Overdue Visit to Mine's... oh and yes does the Nismo Airbox give performance gains?... 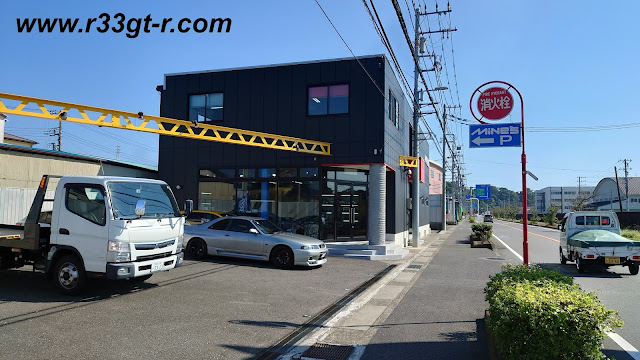 So after I installed the Nismo Carbon Fiber Airbox, I was looking for an excuse to drive the car to see if I could feel any difference - after all, if Nismo is recommending an ECU rewrite, this is not simply a cosmetic add-on, right? (YES! See my analysis below). 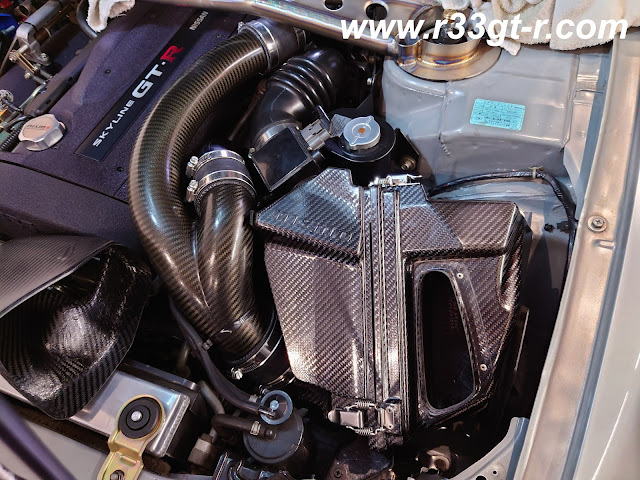 Because it's too much of a hassle to get a new ECU (even though I've been meaning to actually - someone send me one!) I decided to simply unplug the battery and let the Mine's VX-ROM reset itself to learning mode - I figured that the velocity stacks would increase airflow, which means that the ECU would adjust fuel and spark accordingly - in theory having the air flow in more quickly would be similar to the effect I had when I experimented with creating an air inlet that gave a ram-air effect.  So hopefully, even if the VX-ROM wasn't able to take full advantage of the increased airflow, it should still result in a noticeable difference.

So last Saturday, after having called ahead a week before (highly recommended during these crazy times), I drove down for my appointment at Mine's at 1pm.  You see, every summer Mine's has their Summer Sale where they offer some parts on sale as well as zero percent financing for their more expensive items - such as engines.  That's how I was able to afford my Mine's engine way back in 2007 - I'm not rich like some people! Anyway, I had been promising Nakayama-san (the engine Takumi) and Takayanagi-san for years (when meeting up with them at Nismo Festival) that I was over due for a visit and a few new Mine's parts.

Flash forward 14 years, and I figured it was time to have Nakayama-san take a look at my car and make sure everything was still up to their high spec.  I unfortunately once let someone who didn't know how to drive very well take a quick spin in my car, and the engine's quickness surprised him - meaning he did not shift quickly enough, causing the engine to redline. So at the very least I need to get that checked out (hopefully the Mine's engine is over-built and thus idiot proof...)

Anyway, despite the traffic it was a quick drive down to Yokosuka, where Mine's is. After having endured a summer of very mediocre rental cars on my trips - Kia Optima, Toyota Corolla (JDM), Toyota Corolla (USDM) and Mitsubishi Mirage (JDM), it was SIMPLY AWESOME to take the GT-R for an extended drive. They simply do not make cars like this anymore, I felt so connected to the car and the road, and with the rebuilt suspension thanks to the Omori Factory chassis refresh, it was like driving a new car.  The super responsive Mine's engine coupled to the Getrag is icing on the cake.

Walking into Mine's, it seemed not much had changed since my last visit. I think this engine has been displayed in the same spot for the last 20 years... 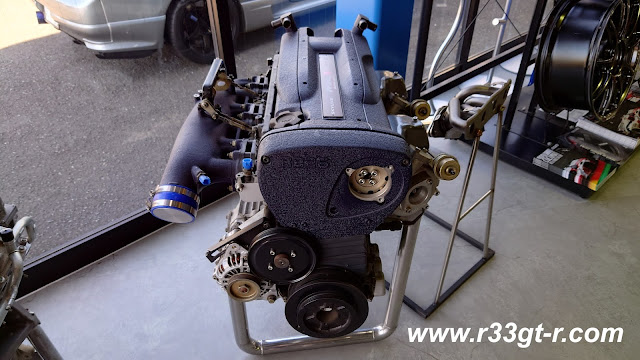 But actually, they did have a few new items on the shelves:

So after the usual pleasantries and a quick discussion with Nakayama-san and Takayanagi-san about what I was concerned with, as well the possible future upgrades I wanted, Nakayama-san had one of the techs clear out space in their workshop for my car. He jumped in my car... 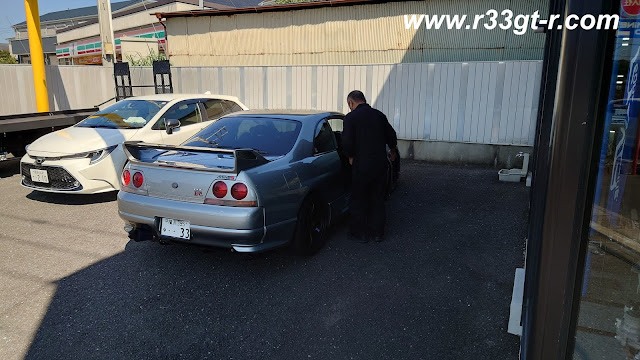 And drove it over to their garage workshop: 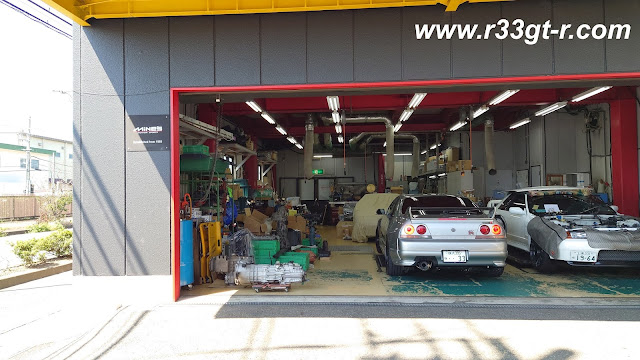 Once parked, he revved up the engine a few times.

This was apparently enough for him to get a general sense of how healthy the engine is.  The verdict - given how little I have driven over the past years - probably around a bit over 30,000km since the engine was built - he believes that the engine is probably fine, despite my stupidity in letting an incompetent redline the engine.  He also examined the engine compartment and noted nothing amiss, no leaks or imminent failures, which of course is always a relief.

Nakayama-san did point out a few areas which can now be improved - technology and techniques have improved in the last 14 years so likely I will be doing what I can to upgrade over the next few months.

After a few more discussions on upcoming parts - most notably Mine's is finally releasing a titanium Silence VX exhaust system for the R33 GT-R - due to customer demand! - I drove back home, enjoying every minute of it and wondering how the upgrades will further improve this car.

As for the Nismo Carbon Fiber Airbox - I do believe it ACTUALLY MAKES A DIFFERENCE!  At high speed engine response was slightly more immediate - exactly how it was with the ram-air system, as well as how the car responded when I first installed the Tomei Expreme titanium exhaust (without any sound deadening inserts like I have in now - to keep the peace in my neighborhood).  A slight push on the throttle is immediately translated into an increase in revs, and the car thus seemed slightly more eager and alive.  However - I did not notice a difference at low speed, so if all you do is drive around in the city, this is simply pure bling.

So then, is it worth the price?  Hard to say - a homemade ram-air system is probably just as effective, and if you couple that with a completely free breathing exhaust like the Tomei (without baffles) then you might get the same effect, a more responsive engine.  But, we all know that many of us like to buy things on HOW THEY LOOK - and yeah it looks great. So in the end, I think you have to ask your wallet...

Hey man you got some great content…are you on Facebook, IG or YouTube at all? I’d love to follow you on those if you’re on them

Scotty, not really.
Probably most active at https://www.facebook.com/BCNR33

Hitting rev limiter once and letting it fall before slowly introducing throttle again is probably no big deal. Annoying but that's just life sometimes. What will really do damage on these engines is repeatedly bouncing off the limiter. The ECU has too little hysteresis and because it isn't drive by wire it can't smooth out the rev limiter by chopping the throttle and controlling the opening, so the engine repeatedly goes into full torque + power shock load on the oil pump gear, then it hits the rev limiter and suddenly unloads which creates gear lash that allows for the shock load to happen, then repeats again multiple times per second.

Anon - good to know, and I honestly wasn't too worried - as you say it happens sometimes. The issue is the guy who drove just SUCKED at driving in general, and so I was worried he did other stupid things when I wasn't in the car to watch him. Actually that gives me an idea, to install an onboard dashcam that can be aimed at the driver...

Could do it with a two channel system if you want it pointed over the shoulder, another option is the two camera in one system that Uber/Lyft drivers use to see their face + passengers in case anything happens. I recommend using a supercapacitor powered camera instead of a battery, the lithium-ion battery cameras don't live very long.

I suspect the reason why Nakayama-san revved the engine is to try and get to the point where instead of the piston/rods loading the crank, the crank is loading the piston/rods. Audible transient bottom-end knock like that can be an early sign of trouble to pull the engine before you go from a relatively cheap rebuild to a complete engine replacement.

I can totally relate to how you're feeling about someone hitting the rev limiter on your car. The local Top Gear magazine tested my R34 and did the same. You would think an automobile magazine editor would know better, but no! Looking back at their older car review videos, the same happened to cars like the NSX they tested. Hopeless!

Love your blog, it’s great to see new updates.
Considering your OCD I’m surprised you let somebody so inexperienced drive your car : /
Hope they didn’t mess anything else up

Top Gear - maybe they should not be in the business of DRIVING the cars, how about just writing about them...

And yeah, silly me. Figured since he was another Skyline GT-R owner, he'd know how to drive better. In all fairness it was the quick response of the Mine's engine he was not used to. That and slow reflexes... oh well...

Always a joy to read your articles!!

I probably got the explanation wrong but this an example of what I'm talking about. Somehow revving in neutral really seems to bring out any bad noises in an engine. Maybe due to the high RPM rate of change?

Kadir, always good to hear from you, thanks!

I've got a question not really related to the above. I've been told you're working on a car cover for the R33 GTR, I was just wondering how i get my hands on one when they become available.

Apparantly theres been a discussion about them on 'Club 33' on Facebok but i cant seem to find that page.

Car Cover - yep indeed I am working on one for Club R33. The Club is by invitation only, for R33 GTR owners. Find me on FB and friend me, and I can add you to the Club. Unfortunately the first batch is already sold out but several other people are excited about this cover so we will have a second round, with same pricing (I hope) but maybe more options like different colors, etc.

Hey Aki, I've Sent you a request and a Private message on FB, My picture is me feeding a Kangaroo (typical Australian things). Looking forward to seeing the goings on in the group,
Cheers.

will you eventually swap the ECU for a more programmable unit, like Link G4X?
I think I read something some while ago that Dino advice you about that.

Keep up with the great content. Still fallowing you for the last 10 years!