Some people remove the stock airbox and install the so-called "mushroom" type pod filters in an effort to get more air into the engine. The added intake sound is cool too... but is this the best solution to getting more air into the RB26?

So - what do these tuners keep doing this? I think that, besides the reassurance that the filtering capacity is maintained (as various reports say the pods may not filter as well as they should, depending on who makes the pod filter), cold air might be the reason why.

Cold air, being denser than warm air, contains more oxygen, and therefore the potential to unleash more energy than warm air. Pod filters do all their sucking of air from air trapped in the engine bay (unless you have a vented hood - see the 400R), which suggests that this might be their main drawback.

So, there is an argument for cold air. What about any kind of "ram-air" effect? I'm still doing my research, but apparently turbo engines don't benefit from this, as the turbines suck in the air they need. However, it would seem that creating positive pressure in the intake system would allow the turbos to kick in that much earlier, if they don't have to overcome any negative pressure in the system.

So - I have the standard airbox. But when you look at the system closely, most of the air being sucked in through the airbox comes from the underside of the leading edge of the hood.

This means that I need to increase the flow of air into this area. Short of building a tube that funnels air into the box directly (like the R34 Z-tune), the best I can do is to get more air into the general area.

Two ideas come to mind: the "hood top molding" option that Nissan offered, and a modification to a radiator gril panel. The hood top molding is a slim piece of plastic that is attached to the leading edge of the hood, creating an area of positive pressure, which forces more air under the hood (otherwise these kinds of areas have negative air pressure - the leading edge is too slim, and the air gets split).

My idea is to take a cheap aluminum radiator panel, and cut a flap, bend the flap down and have air coming through the grill (where the GTR emblem is) be funneled up into the snorkel area. 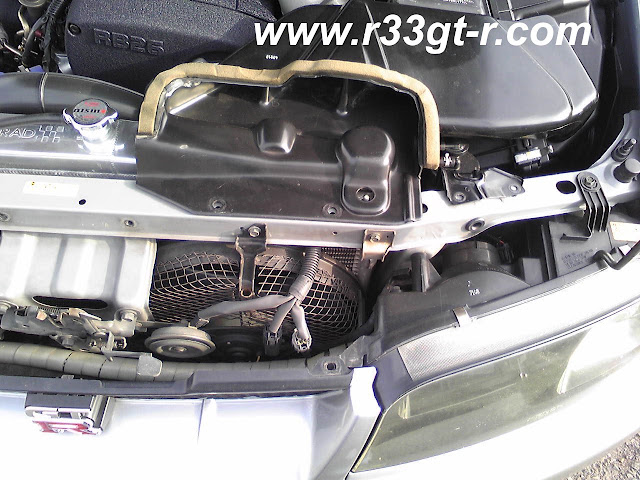 And the result? Definitely not placebo, the engine DOES respond better. Always having air coming in means less or no hesitation when I step on the gas. Of course don't know if the car makes more power, but definitely more responsive.